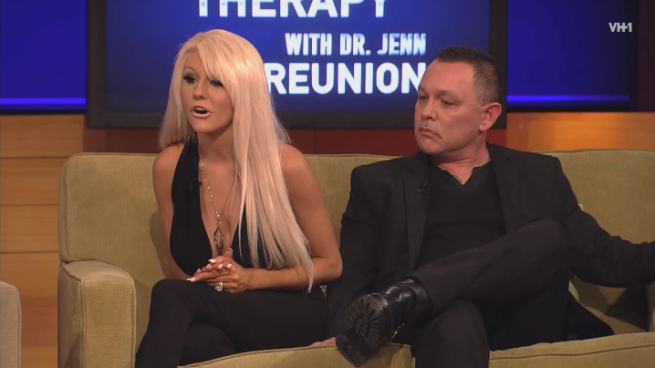 Who Is This Now? Nik.

Why Are We Watching Him? He and his wife, Shayne, are catching up with some of their old frenemies.

How Did He Get Here? A little while back, Nik and Shayne were having problems and agreed to undergo televised couple’s therapy under the guidance of Dr. Jenn Berman. Now we’re catching up with them, and with some participants from other seasons, to see how well the tune-up worked.

What’s the Grossest Thing We See? Nik and Shayne are evidently still pretty mad at Courtney and Doug, of the notorious age gap (Courtney married Doug when she was still underage and claimed to be 16 at the time she was in the therapy house). Courtney (now 20) tells the story of having cheated on Doug, on camera, when she was on the British reality show Celebrity Big Brother and Doug says he suggested that they separate. Nik then asks whether the real reason Doug broke up with Courtney is that she turned 18.

What Have We Learned? Against all logic, it actually is possible for me to take Courtney and Doug’s side in a dispute.

Why Are We Watching Her? She’s coming up on 30 days of marriage and she’s starting to know her husband, Doug, fairly well.

How Did She Get Here? Jamie and Doug agreed to be paired up with by a panel of experts, and not to meet or know anything about one another until they met at the altar on their wedding day. You’re never going to believe this, but things have not been so smooth for the two of them!

What’s the Grossest Thing We See? After five weeks of “marriage,” Doug and Jamie must decide whether they want to stay married, and Jamie is making sure Doug doesn’t forget FOR ONE SINGLE SECOND that she still hasn’t made up her mind about him. She’s still talking about having felt zero attraction to Doug when she first saw him; she’s still needling him about having smoked a cigarette in the last episode and lied to her about it; and when he asks what she might like for her birthday, she immediately shoots back that they might be divorced by then.

What Have We Learned? If Jamie being this mean to Doug all the time hasn’t dimmed his interest in her, maybe nothing will.

Who Is This Now? Deitrick.

Why Are We Watching Him? He and his wife, Dominique, are airing some of their issues as parents of a newborn and a toddler.

How Did He Get Here? Almost certainly directed by a producer, Deitrick’s mother — having stayed with the couple for a while after the birth of her new granddaughter — suggested that Dominique and Deitrick seek counseling to help work out matters she’d seen them clash over.

What’s the Grossest Thing We See? They start by talking about Deitrick’s contention that they should get a nanny; Dominique is opposed because she doesn’t want someone outside the family to raise her children, and also because she thinks she wouldn’t need so much extra help with the kids if Deitrick were more hands-on as a father. Dominique explains that, already, Deitrick has made it a policy not to change what they term “boo-boo diapers,” which I take to mean poopy ones. Deitrick not only fails to refute this accusation, but goes one further: “If I do any more, I’ll be taking on part of her role, and I’m not a woman.”

What Have We Learned? Dominique’s only expectation is that Deitrick will change a few diapers so that her older daughter, Destin, will see and know, later in life, “He helped raise me,” I guess that means Dominique doesn’t even expect Deitrick to be a coparent (“helped raise me”?), so it probably won’t actually be that hard for Deitrick to achieve the standard that, in other families, would be set by, like, a nice uncle.