Freak Show and Tell: The Mommy Issues Finally Rear Their Head on ‘Married at First Sight’ 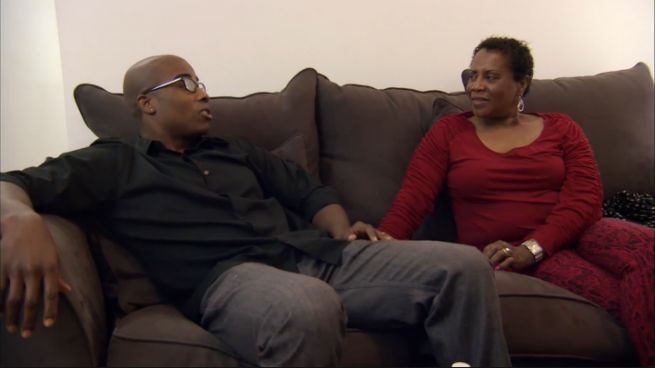 Why Are We Watching Him? He’s enlisting his mother, Roxanne, in his ongoing battle to remake his new bride, Monet, in his image of the perfect submissive wife.

How Did He Get Here? Vaughn and Monet each agreed to let a team of experts choose a spouse for them. They met for the first time at the altar, which is not going so great in this case.

What’s the Grossest Thing We See? Things start out badly when Vaughn (for the cameras’ benefit) describes to Roxanne his ideal woman: “Somebody that’s, you know, not selfish; and is super-nurturing; and, you know, is sweet! Somebody like you!” Later, at what I dearly hope is a producer-instigated summit, Roxanne asks Monet whether she likes Vaughn, and goes on to urge Monet, even if she’s tired after a day’s work, to “make a little effort to accommodate him.” Roxanne adds, “Men are just fragile. They want to feel appreciated, they want you to, you know, fawn over them somewhat. You don’t have to mean it — just do it.”

What Have We Learned? For all those of us who suspected that Vaughn’s rigidity and neediness in his relationship with Monet were his mother’s fault: Behold our proof.

Who Is This Now? Ron.

Why Are We Watching Him? He’s expressing misgivings to one of his minister colleagues about participating in a faith crusade event aimed at gang members.

How Did He Get Here? This whole situation seems pretty clearly contrived by producers, but to be safe, let’s just say it’s because he was saved.

What’s the Grossest Thing We See? As Ron indicated in the season premiere, he has reservations about being part of an event organized by fellow minister Noel, in which Loretta, Noel’s friend (or possibly “friend”) of 17 years, would have a significant leadership role. Ron’s issue is that Loretta should not be treated as a minister’s wife if she technically isn’t one, and that if Ron participates in the event, it will seem to outside observers as though he is sanctioning Noel and Loretta’s relationship — a relationship he believes is sinful, since he assumes Loretta and Noel are sleeping together out of wedlock. To their credit (in my opinion), Noel and Loretta neither confirm nor deny that they are, trying to keep Ron on topic by reminding him that the two matters have nothing to do with each other. As Loretta gets increasingly heated at Ron’s insinuations about her and Noel’s private life together, Ron announces that her bad attitude is the reason she’s single, and that she’ll never land a man like Noel if she keeps trying to control him “like a jezebel.”

What Have We Learned? Ron’s wife is a pretty lucky lady!!!

Who Is This Now? Darlene.

Why Are We Watching Her? She’s at odds with her 16-year-old daughter, Bianca.

How Did She Get Here? Darlene is a single parent who grew up without a lot of parental oversight; as a consequence, her goal for all her children is total perfection.

What’s the Grossest Thing We See? Despite the fact that Bianca is extraordinarily accomplished — she’s a regular contributor to NPR and the Huffington Post, while still in high school — Darlene is obsessed with, as she puts it on several occasions, “smooth[ing] out the rough edges” to give Bianca what Darlene regards as a more polished appearance. She agrees to teach Bianca to drive only on the condition that Bianca let Darlene give her a makeover, and inserts herself between Bianca and the hairdresser Darlene has picked out — since, as Darlene puts it, no one will take Bianca seriously if she files a news report on TV with a “big Afro on [her] head.”

What Have We Learned? Bianca, who lives with Darlene in Oakland, applies to Columbia and gets accepted, meaning that nagging like Darlene’s could lead one’s child to put a continent’s worth of distance between herself and her mother.