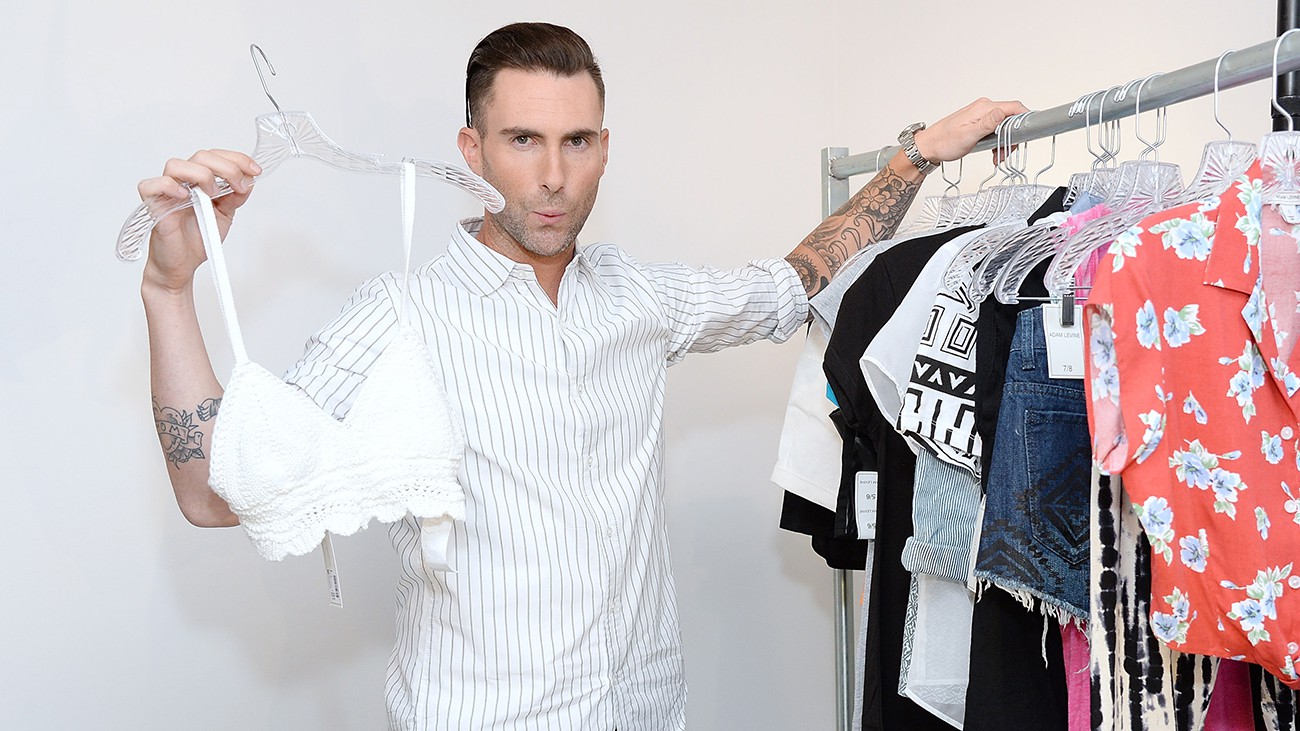 There’s a public-relations maneuver common among campaigning politicians and disgraced celebrities that involves the deployment of self-awareness as defense mechanism. The idea is that if you acknowledge the public’s perception of you (“I recognize that I frequently appear to be insincere”), then that perception is neutralized. Everyone is familiar with this trick, yet it still has a high success rate. People are so used to being lied to that even a slight nod toward the truth is seen as refreshing, even if the truth itself hasn’t changed.

Adam Levine has been working this angle hard in the lead-up to Maroon 5’s new album, V. A recent GQ profile begins with Levine making an extended argument that he is not a douchebag, which is definitely a thing that non-douchebags do all the time. The headline, apparently suggested by Levine himself, is even needier: “Adam Levine Doesn’t Care If You Like Him (But He’d Really Prefer That You Did).” For Rolling Stone, Levine switched from cocksure pleading to a cocksure shrug. “I much more enjoy the shit that I know is gonna be polarizing in some way,” he says. “If some people don’t absolutely fucking hate it, you’re doing something wrong, in my opinion.” This statement will seem ridiculous only if you’ve actually heard Levine’s music. V is hardly a polarizing record. It’s possible to hate it, I guess, but “fucking hate it”? Really? Considering what’s happened in the world in just the past month, getting angry at a Maroon 5 album seems almost obscene.

Because the Internet exists, surely there are people who are deeply invested in whatever feelings they have for Maroon 5. But as someone paid to have opinions about pop music, I kept having the same problem while listening to V: This is a group for whom I have not a single discernible emotion or thought. Maroon 5 has been putting out records for a dozen years now, and I suppose it could be argued that the band is this generation’s Hall & Oates — a pop-soul outfit that has turned out hits, no matter the trends, in reliably dorky fashion. But that comparison doesn’t totally ring true for me; Hall & Oates had way too many genuinely great, memorable songs. Maroon 5 is more like the Matchbox Twenty of the Justin Timberlake era, silent-majority rockers par excellence for whom Levine’s boyish, stubbly face is the sole recognizable brand. Can you name another person in Maroon 5? If I told you James Valentine was the name of Maroon 5’s guitarist, would it register? What if I told you the bassist was named Larry von Funkstringson? Who has the energy or interest to verify it in the liner notes?1

The sort of pop music that generates the most dialogue now is all about outrage. V arrives in the wake of recent music videos by Nicki Minaj and Taylor Swift that provoked conversations about race, gender, class, and the sociopolitical significance of ass-shaking. Maroon 5 belongs in the opposite context. Maroon 5 is a fixture of pap, pop’s less interesting, but in some ways more elemental, underbelly. Maroon 5’s members are the fathers of dopey Canadian pop-skanksters Magic! — whose stubbornly sticky smash “Rude” (which contains traces of Maroon 5’s vaguely reggae-ish 2012 hit “One More Night”) will define the summer of 2014. For Maroon 5, “Why you gotta be so rude?” isn’t merely an annoyingly ubiquitous chorus — it’s an aesthetic.

But Levine might be savvier than I give him credit for: By protesting about his many haters, perhaps he’s positioning V as another love-it-or-hate-it pop provocation, rather than just one more complacent pap record. After all, if polarization is in, the pap craftsman’s only option is to fake it. Never mind that the music doesn’t bear it out. 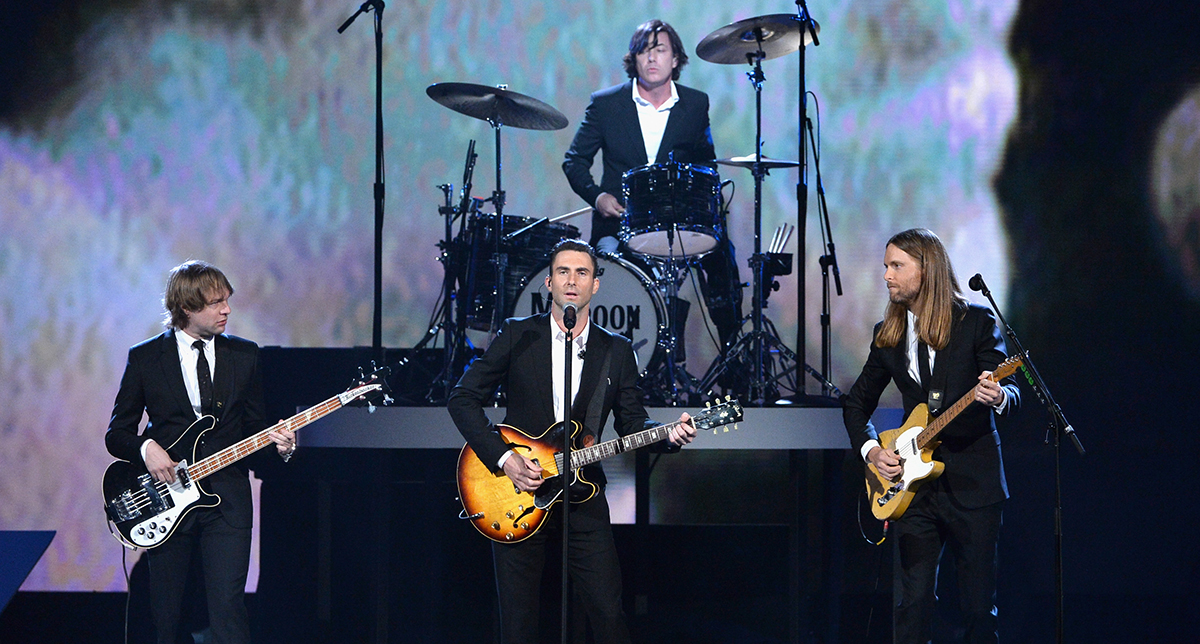 V arrives after the career-saving pandering of Maroon 5’s previous record, 2012’s Overexposed, which shored up the band’s sagging commercial fortunes by embracing full-on MOR dance-pop. The template for that album was set by “Moves Like Jagger,” the final single from 2010’s underperforming Hands All Over, which became Maroon 5’s first no. 1 single in four years, thanks in part to the exposure from Levine’s new stint as a judge on The Voice. The mercenary streak continues on the new album: The guitar lick on “Maps” is strikingly similar to the riff from Nico & Vinz’s appealing summer hit “Am I Wrong.” The frothy new-wave ’80s-isms of “Animals” and “Sugar” are lifted directly from the Katy Perry songbook. “New Love” delivers the predictable EDM endorphin rush once the chorus hits. The feeble ballad “My Heart Is Open” is the showcase for Levine’s new Voice costar, Gwen Stefani, another yeoman-pop figurehead in need of a jump start.

Maroon 5 sounds most like itself on the incongruously titled “Feelings,” which finds Levine back in the familiar role of horndog white guy who’s all about bangin’ the sexy, sexy ladies. The chorus, in which Levine sings in his signature robotized falsetto that he has “feeeelings for you,” is less than convincing — but when he says, “You and me, let’s go all night / Going so high, we fuck the sky,” the banal vulgarity is unmistakably, authentically Levine. Whereas our biggest pop stars are celebrated for upsetting the status quo, Adam Levine is the status quo.

When I took on the silly but fun task of determining the winners of the American Band Championship Belt, I did not mention Maroon 5, and a strong case could be made that I was derelict in my duty because of this exclusion.2 Certainly from a commercial perspective, few American bands have been as successful this century. Since Maroon 5’s 2002 debut, the five-times platinum Songs About Jane, each of the band’s records has sold at least 1 million copies. After that late-’00s dry spell on the singles chart, Maroon 5 recovered strong, selling more than 6.5 million downloads of “Moves Like Jagger” in the U.S. alone and more than twice that internationally. The follow-up hits, the Wiz Khalifa costarrer “Payphone” and “One More Night,” passed the 5 million and 4 million download marks, respectively.

Maroon 5’s music can seem frustratingly opaque if engaged as a series of songs packaged together on an album. Locating the emotional core of V is pointless, akin to searching for enlightenment on a bottle of musk. While a lyric (from “New Love”) like “If I ever let you down / Forgive me / Forgive me, now / Would it kill you to forgive me, now?” might signify pathos in a different setting, coming from Levine, it is a repetitive, hectoring bleat searching mindlessly for a hook, like a shark stalking swimmers’ legs. But on the radio, Maroon 5’s malleability has clearly been beneficial. Pop stars are exalted but ultimately weighed down by personae that set the parameters for their subsequent work. Meanwhile, a relatively anonymous pap act like Maroon 5 is free to move into whichever realm proves most conducive for continued sustenance. As a blandly handsome and properly credentialed Caucasian male personality, Levine has the privilege of fading in and out of every corner of popular consciousness, always seen but never quite remembered. He can guest on a Kanye West track, contribute to a televised Beatles tribute, and pal around with a good ol’ boy like Blake Shelton and elicit the same dispassionate reaction from the audience. Little is expected from Levine beyond the filling of space between icons and the circuses that accompany them. And Levine always delivers the precise amount of what little is expected of him.

The GQ story depicts him as a proudly confident guy who would really rather be perceived as humble, but who nevertheless always believed he would be rich and famous someday. It was only a matter of finding the right version of Maroon 5 — before settling on its R&B-heavy pop-rock guise, the band drifted through grunge, pop-punk, Britpop, and even jam band phases. (Oddly, Maroon 5 references its alt-rock roots on V by covering Marcy Playground’s “Sex and Candy” for a bonus track.) This, of course, is not unusual for a baby band in search of an identity; the difference with Levine is that he probably could’ve made it playing any kind of music. He just had to figure out what the market demanded. That principle also guides V, a record that will live or die on the whims of radio programmers and therefore sounds exactly like what radio programmers are already playing.

It’s no wonder Levine is so good as a coach for budding pop singers on The Voice. His own career has been a kind of game show, with a long line of flashy challengers and genre makeovers. I suspect we’ll be seeing this guy for many more years to come, whether it’s as a musician, a TV star, or a movie actor. (His first film as a leading man, Begin Again, is in theaters.) This might upset you, but honestly, do you care enough to ask him to leave?

Freak Show and Tell: The Mommy Issues Finally Rear Their Head on ‘Married at First Sight’