For more than a year, we’ve been in the grip of a Matthew McConaughey fever. He’s starred in a popular, overrated HBO series and appeared in three very different, very big movies. His fourth, Interstellar, opens Friday. His hotness, tan-ness, and full-head-of-hair-ness have been drooled over. So has that drawl. He won an Oscar, was nominated for an Emmy, starred in some risibly ponderous car commercials, and earned an apparently permanent place in the lexicon. (The so-called McConaissance persists!) Perhaps, failing to appreciate the rarity of McConaughey’s achievement or perhaps because of our national obsession with sequels, some of us have gone looking for a follow-up. Based purely on an increased workload and an uptick in public appearances, Reese Witherspoon seemed to be an obvious candidate.1 She’s scheduled to appear in three movies before the end of the year, made the tabloids after a drunken, good-time episode last spring with her husband, and co-produced Gone Girl. So why doesn’t it feel as if we’re in the throes of McConaissance II: The Reesening?

For one thing, what’s happening to McConaughey is part freak occurrence, part shrewd strategy. It also had to do with America being ready to give him a second chance. The reports of public misconduct, the series of iffy showcases for his lady-killer persona, the sense that he was content with sharing parity with Kate Hudson (a star truly due for rebirth) — he had to want more than that. But to achieve a McConaissance, we had to want it for him, too. In 2013, he starred in Jeff Nichols’s Mud, an idiosyncratic crime romance/coming-of-age shoot-’em-up family melodrama. It was too idiosyncratic to totally work. It was too many movies. But you kind of fell for it anyway. Mud moseyed into the top 10 at the North American box office and stayed there for a couple of months. We wanted it to work.

There’s no proof of the same for Witherspoon. Gone Girl shared its opening day with something called The Good Lie. The posters advertised a glowing close-up of Witherspoon, beaming, while some African-looking people did something tribal beneath her. Another one of these nice-white-lady-rescues-the-brown-people movies, you were free to presume. After it opened in New York and Los Angeles, it became clear that The Good Lie wouldn’t be opening in many other major cities. After two weekends, it was all but gone, having made a pitiful fraction of what Gone Girl had. On the one hand, this was heartening: One Blind Side is enough. On the other: It’s shocking that a Witherspoon movie distributed by Warner Bros. — however annoyingly good its intentions — wouldn’t even make it all the way out of the gate. 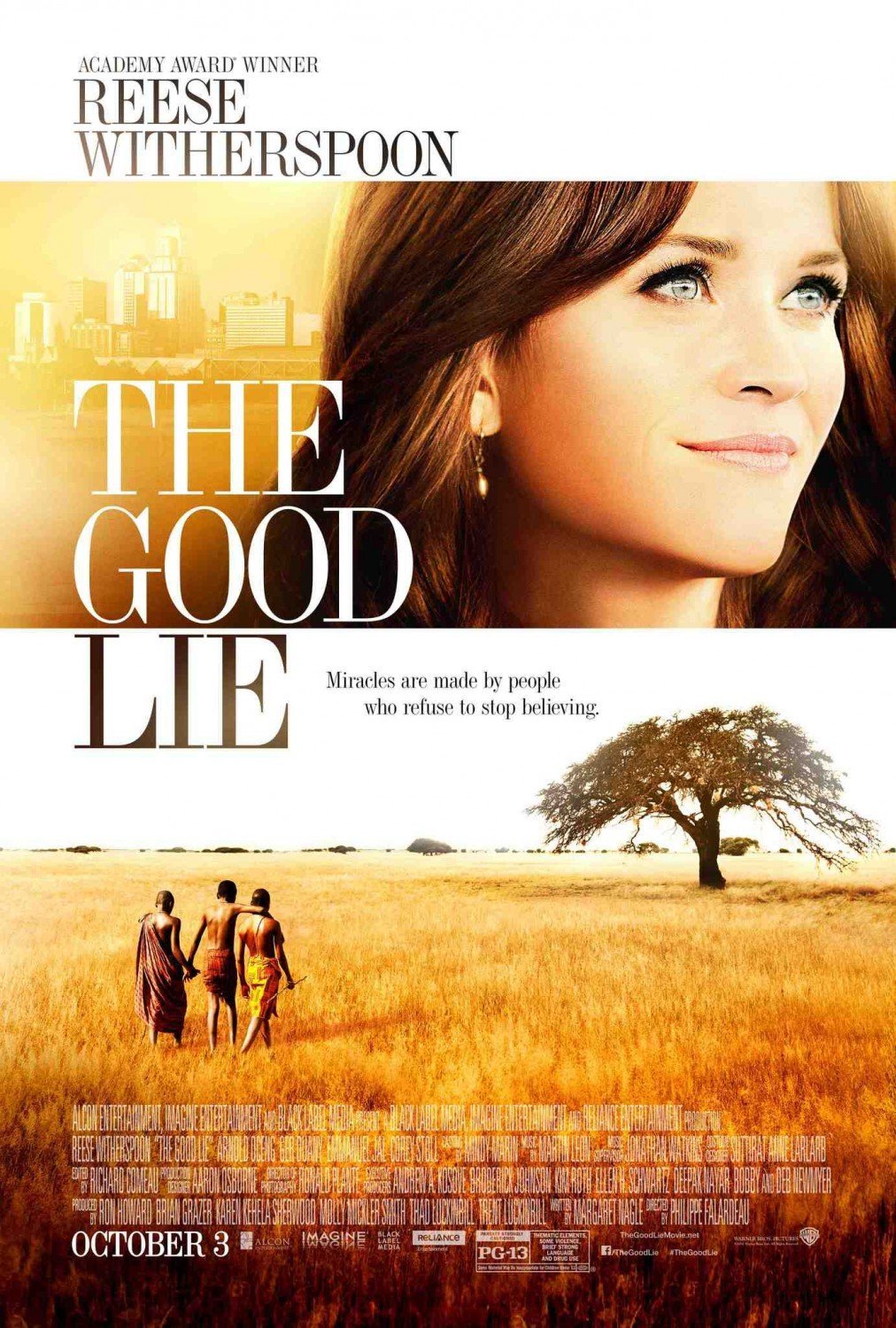 The Good Lie turns out not to be the movie the ads imply. It’s not about some nice white lady doing good; Witherspoon might have half an hour of screen time. It follows a trio of Sudanese refugees, Mamere, Jeremiah, and Paul — Arnold Oceng, Ger Duany, and Emmanuel Jal — from a futile 570-mile walk toward Kenya to their new lives in Kansas City, Kansas, where they’re housed by a Christian charity. Witherspoon doesn’t run the charity. She’s barely a practicing Christian. She’s Carrie Davis, from a employment agency. Her job is to find them work, which she does, and for her, that’s it. Otherwise, the movie watches as these three try to balance the otherworldliness of being out of Africa with a longing for home. They’ve seen their families slaughtered by Janjaweed militiamen. They’ve run for their lives. Now here they are shelving cereal and toiling at a metalworks shop. Their fortune is bad, good, and sad.

Mamere, Jeremiah, and Paul are required to underscore every cultural difference between Kansas City and Sudan. Mamere is astutely formal. “May you find a husband to fill your empty house,” he says to Carrie, who looks at them all like they’re from outer space. But the script, by Margaret Nagle, goes out of its way not to allow Carrie to usurp the Sudanese. This isn’t an “opportunity” for Witherspoon. The story keeps twisting, probably too much, in order to absorb the full measure of what these men have gone through. There’s one attempt to rejoin a fellow refugee in Boston and another to rescue a relative from a camp in Kenya. And you can definitely count on someone to say something like, “They call us the ‘Lost Boys,’ but we are found,” and someone else to tell Carrie to stay out of a skirmish between the guys because it doesn’t concern her. But that last choice, as didactic as it is, is precisely the conscious antidote for all the busybody, back-patting, do-gooding that tends to happens when white people meet brown people. Carrie and a friend played by Corey Stoll facilitate when they can, but mostly they do things like watch Mamere, Jeremiah, and Paul and just imagine what they’ve been through.

You thank your lucky stars for the little things in a movie like this, because they turn out to be important. The Good Lie doesn’t leak sermonizing guilt. It bravely appeals to your sense of decency without leaning on a star to make its case. This feels like a movie that’s seen all of the other films and read the memoirs and understands where the heart of the story is. Director Philippe Falardeau isn’t much of a filmmaker — this is basic stuff — but he doesn’t have to be great when serviceable will do. He lets the emotional moment play without over-hitting the notes, and he gets the most out of Oceng, Duany, and Jal, each of whom has presence.

Does the movie have a bad title? Sure. Is that ad campaign opportunistically false? Absolutely. The Sudanese do all of the hard work. Carrie just cleans up her house. It’s unclear what Warner Bros.’s plans are for the rest of the year. There are terrible movies making less money on more screens. But as a flash point for renewed excitement for Witherspoon, she deserves better. I like what she’s done here. Rightly recognizing that the world is bigger than her stardom, she cedes to Oceng, Duany, and Jal, and to Kuoth Wiel, who plays another refugee. Despite what the posters promise, Witherspoon doesn’t glow in this movie; she looks like she hasn’t seen the sun in years. But her hard flintiness could get a campfire going.

Witherspoon had a memorable, hardened, out-of-it part in Mud. She was the title character’s rough Dulcinea. You left entranced with McConaughey and curious about her. Where has she been? Where is she going? Will she get back to a place where she gets to appear to enjoy acting, where her sharp brand of starriness gets better workouts? Since she won an Oscar in 2006 for Walk the Line, she’s made about a movie a year and had no hits besides 2008’s Four Christmases.2 She hasn’t been the same since that Oscar, which just puts her in an astounding club of women that includes Helen Hunt, Gwyneth Paltrow, Halle Berry, Hilary Swank, and Charlize Theron. For them, it’s been one dreary part and dreary movie after the next. Some of the work in this stretch has been bad luck. Witherspoon was livelier in James L. Brooks’s How Do You Know than the movie could really handle. It used up all of her brilliance. But the only excuse for This Means War is a temporary bout of illiteracy.

So far the Reesening has been an altruistic affair. She’s a helper in The Good Lie. And she could have played Amy in Gone Girl, but let the part go to Rosamund Pike, who, in turn, went to town on it. (The truth is that it’s an impossible role for an established star. How do you go from sweetheart to psycho without burning up your audience?) Witherspoon might be more interested in dark places than in black holes. Still, there was something about the video of her soused altercation with that police officer (“You’re not a real cop!” she screamed) that made you want to see some other side of Witherspoon, the side that surfaces in Mud and in her human exasperation in everything from Election to Sweet Home Alabama. Next month brings a movie of Cheryl Strayed’s memoir, Wild, in which Witherspoon plays a divorcée on a long, salubrious hike, and a good, smallish part in Paul Thomas Anderson’s Inherent Vice. The excellence of the latter film exponentially exceeds the former, but Witherspoon is wonderful in both.

Whatever it is we’re looking for from her — sure signs of womanliness, grit, talent, pleasure — seems fair to anticipate in a star. There are some people we’re drawn to because they seem essentially likable without needing us to like them. Witherspoon is such a person. We want her to win. In looking for her to pull a McConaughey, we might be overlooking that we’ve already got something better. We’ve got her.