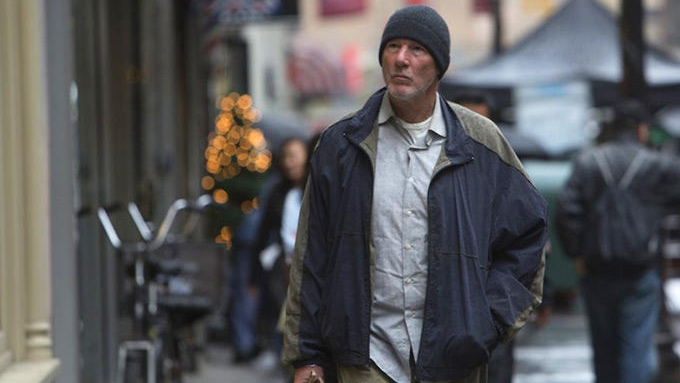 The first time you see Richard Gere in Time Out of Mind, he’s babbling to himself, in a bathtub, lost in a seemingly abandoned apartment that a contractor (Steve Buscemi) has to kick him out of. His face has a lot of bloody knocks and his white hair is short, like someone cut it with kiddie scissors for lice. He’s rambling about someone named Sheila. He buys a bodega beer and chugs it from a brown paper bag. “Aaah,” he says after a sip of this cheap, watery nectar.

Gere is George Hammond, and it takes only a minute to see that George is homeless, and only a few more to realize that the movie’s formal strategy for expressing compassion and dismay is photographing him from anonymous distances and through the windows of restaurants, subways, and doors. It’s a moralistic gimmick: George is visible but also unseen, unnoticed, and uncared for. But it works. Confronted by this device with a sea of overcoats, an audience is forced to locate the one wearing George.

The writer and director, Oren Moverman, makes homelessness harshly immersive. George wanders around Brooklyn and Manhattan, haunting an estranged daughter (Jena Malone) at the bar where she works, trying to apply for Social Security despite having no ID, sleeping in shelters, mistaking a shopping-cart lady (Kyra Sedgwick) for “Sheila,” telling his logorrheic sidekick (Ben Vereen) of a few days and nights to shut up, please. I like that Moverman has thought cinematically about the presentation of the indigent and mentally ill in a large city: as ghosts and gnats and malnourished creatures. It’s a life that necessarily comes across as untenable and, even without knowing the details of everybody’s circumstances, unfair. And this, I would say, is far from the worst-case scenario. George’s greatest vice appears to be beer. There are times, in his coat and slacks and sweater, that he just looks like the disheveled attorneys running around this city. Vereen’s character, Dixon, has been out there too long to keep up appearances. He seems homeless.

There’s no great mystery to this movie; you just want to know how George wound up this bad off. At some point he explains to Dixon what happened. But there are many unanswered follow-up questions. And maybe they don’t matter when George is peeing on sidewalks and eating out of street-corner trash cans. You can see Gere thinking his way through these scenarios, but he’s never been the sort of actor who can give you complex inner life. You can get chilliness. You can get heat — arrogance, love, and anger, too. But not existentialism, not pensiveness. As a star, he’s come to embody different iterations of American male power — sexual, financial, myth-making. And now here he is with none. The movie doesn’t push him as far as he could probably go, but maybe this particular life on these particular streets represents a kind of limit. There’s no drama in that, just a lot of generic details.

To that end, this is a work of generic advocacy. That’s not bad. Moverman used to be a news reporter. As a filmmaker, he provides observational atmosphere. The camera watches Gere sit and think, and drift down a sidewalk or up the shelter stairwell — sometimes you see him from inside the apartment building across the street, where you can hear whatever activity is happening in that space. This is a heightened realism that approximates what directors like Luc and Jean-Pierre Dardenne, Laurent Cantet, and Lodge Kerrigan have managed in telling the stories of fallen citizens: Look but don’t touch. But their watchful elegance isn’t Moverman’s strength. You can sense two hands guiding the proceedings, you can hear them typing up an editorial.

This is the third film Moverman has directed. The previous two were 2009’s The Messenger, with Ben Foster and Woody Harrelson both devastatingly good as damaged soldiers who deliver death notices, and 2011’s Rampart, with Harrelson as a bad cop, trying to end all future depictions of law-enforcement psychos. The gentleness here feels studied, but it seems like Moverman might be better off as a director who likes to gamble on emotional and actorly excess. The opening scenes of The Messenger, in which Foster and Harrelson stand by as families grieve and rage, do something powerful with that excess. Here the risk appears to be putting someone as famous as Gere alone on the streets. That might also explain the distance-filming. But every once in a while the empathy of the risk, of the searing op-ed, comes through. If we won’t notice and help a homeless Richard Gere, then who will we help?