Sanaa, You in Danger, Girl: The Perfunctory Stupidity of ‘The Perfect Guy’ 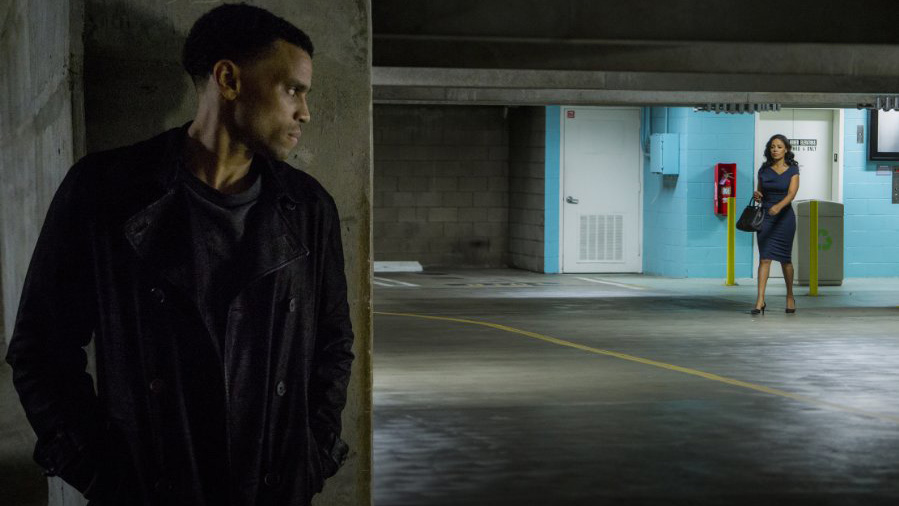 I love Sanaa Lathan, except when she has to play dumb. And, boy, does The Perfect Guy need her to be dumb. It’s designed to exploit the insecurities of so-called careerists. You’ve spent so many years using your intelligence and strength to amass clout, income, property, and hair you can’t get wet that suddenly you’re 36 and so desperate for a man to start a family with that you’re on edge — like on peak Angela Bassett edge. That’s where Lathan’s Los Angeles political consultant Leah Vaughn is at the start of the movie: ready to have the rest of having it all. But her high-powered boyfriend, Dave (Morris Chestnut), is like, Don’t start with that. But how can she not? She just watched him be really sweet at a party to somebody’s son. He reminds her that divorce runs in his family, like diabetes or gas. “I don’t want to wake up hating you,” he says, and so they stop sleeping together.

Two months later, Leah’s at a bar being stood up by a friend and hit on by a lout when an IT expert named Carter (Michael Ealy) swoops in and pretends to be her boyfriend. This happens to be the same person she first saw at a coffee shop back when she was with Dave, and he made her so nervous with lust that she almost forgot her latte. Now she’s forgetting her common sense. After a date, she takes him back to her place and roots around for the spare key to her big glass house on a hill. And there’s a close-up of the key — as if the audience needs it. We know he’s crazy. This is the sort of movie that leaves you yelling at the screen regardless of your movie-theater politics.

Carter is cute and all, but why isn’t Leah bothered that when he speaks he sounds like one of the killers from Scream? I mean, Ealy’s entire terrible performance is an act of foreshadowing. He might as well be wearing a “Blank From Hell” T-shirt. On the drive back from a Bay Area weekend of not sharing the same bed at Leah’s parents’ house, Carter beats a stranger silly at a gas station while Leah screams her head off. To be fair to Carter, he sees what we see, which is a stranger leaning into Carter’s antique car and talking to his girlfriend. The stranger is just asking about the vehicle, but Carter acts like it’s the climax of Taken.

That incident is enough for her to end the relationship. But he won’t let her. He stalks her at work and at home. He uses his IT wizardry to hack into her email account, and that spare key to install surveillance cameras in her house. While he’s there, he takes a moment to nuzzle one of her bed pillows, finish a glass of leftover wine, and suck on her toothbrush. He leaves an “If I can’t have you, no one will” note on her car (yes, this is a movie with an empty-parking-lot sequence — in 2015!). Oh, and he steals her cat, which in a better sex thriller would feel like a metaphor for something.

But The Perfect Guy is too busy stealing from every other Blank From Hell movie — Sleeping With the Enemy and Sliver and No Good Deed — except in the dullest, cheapest-looking way. Leah’s best friends (Kathryn Morris and Rutina Wesley) are two talking haircuts. Her doomed next-door neighbor is Tess Harper. At least I assume it’s Tess Harper, since the lighting in this movie — which David M. Rosenthal directed and Tyger Williams typed up (his last screenplay was 1993’s Menace II Society) — is so bad that it’s hard to see anything that doesn’t happen in broad daylight. That’s a lot of stuff, including a car crash and a couple of murders.

Eventually Dave reenters the picture, and Leah promises to chill out. He might not be ready for a family, but at least he doesn’t require a restraining order. I wish Rosenthal knew how to direct actors, because he’s got some good ones here. But nothing comes off any of the stars. They’re just shy of being zombies. Ealy manages to be so many places so undetectably — in the closet, under the bed, in a tailgating car — that I wouldn’t have been surprised to learn he’s been dead the whole time. It’s never been more tempting to put out an APB for Tyler Perry, who learned how to make a zesty, suspenseful work of trash: I’ve never missed Temptation: Confessions of a Marriage Counselor more than I did while watching this.

The climaxes of these films tend to be like the end of a diva’s pop song: where all the fierceness is. Before that, we have to watch Lathan make mistake after mistake and say things to the detective working her case like, “I don’t know what you mean.” Until the climax, that sums up her performance. Leah aims most of her cluelessness and sense of affront at a white detective named Hansen, who’s played by Holt McCallany, one of those actors whose seen-it-all ruggedness constitutes a kind of street wisdom. He’s the best thing in the movie and the only actor who has any palpable chemistry with Lathan. Nothing happens between them because that would have been too much. But it should have. That would have been something.

This was the no. 1 movie in the country last weekend. No Good Deed, which came out almost the same weekend a year ago, managed that feat, too. And Straight Outta Compton led the box office for three straight weekends last month. Setting aside that they’re all movies about (or courtesy of) black men who threaten black women, they’re hits that further contradict the myth at the studios that Americans don’t want to see movies with mostly black casts — Ride Along and Think Like a Man Too also hit no. 1. The Perfect Guy cost a relatively cheap $12 million, even though it’s impossible to see where the money went: to keep Ealy in latex gloves? But budgets that low mean these movies don’t have to conquer the Chinese box office. Hollywood shouldn’t stop getting behind important movies like 12 Years a Slave and Selma. But a little Empire, which resumes on Fox in a couple of weeks, also never hurts. Glorious, difficult depictions of iconic black lives with talented black actors is necessary. But true entertainment equality is being able to see them star in the same lucrative crap as white people.