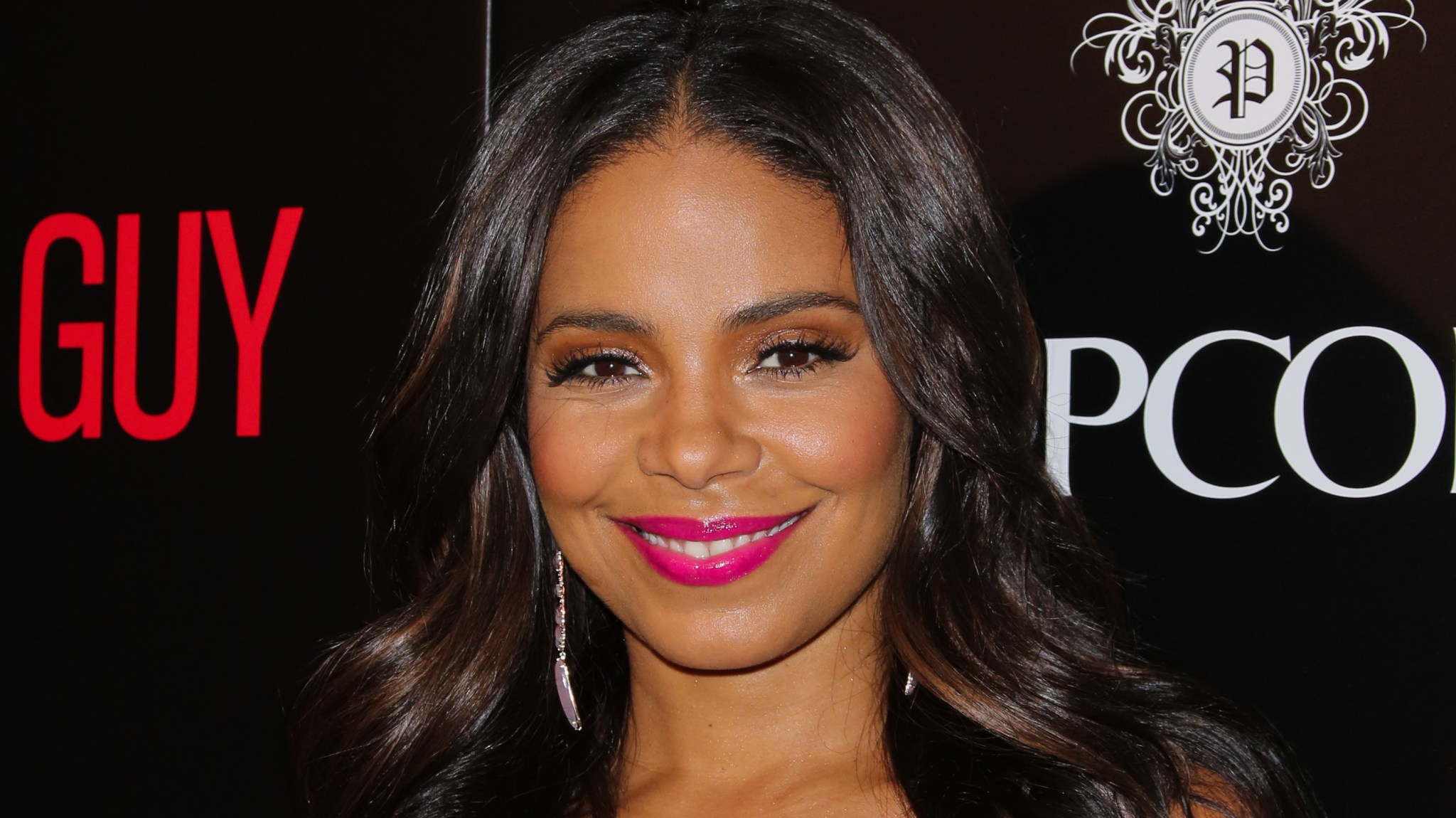 When we start chatting, Sanaa Lathan’s a bit punchy. There’s a huge, high-decibel construction project going on outside her modest L.A. home, and she keeps interrupting herself to giggle, sigh loudly, or apologize for the noise. “Do you hear this? It’s horrible!” she yells, a loose, almost mischievous laugh spilling from her as it does many times over the course of our conversation. “This is when I wish I had a 9-to-5.”

Much of her early chatter is like this: funny, warm, but a little impersonal. In interviews, Lathan is traditionally guarded — many of her answers pour forth politely and fully formed, like she’s given them hundreds of times, and she evades questions about her internal and personal lives. It’s only after we’ve developed a rapport, and the sound of bleating trucks has considerably weakened her resolve, that she allows occasional glimpses at what she calls her “soft heart [surrounded by] a steel exterior.”

The most telling of these glimpses comes when I least expect it. Near the end of our interview, Lathan is gushing about 1940s Hollywood, which produced dozens of female-driven vehicles, including the classics starring the likes of Bette Davis, Joan Crawford, and Katharine Hepburn. “That’s when women dominated,” she says. “I’d love to see women carrying films like that, being vulnerable and strong.”

It seems unlikely, but this is what attracted Lathan — after suffering through a mid-career string of wife and girlfriend roles — to The Perfect Guy, whose titular joke is that said guy, played by Michael Ealy, is not only imperfect but is also a murderous stalker. The film, she says, turns the crazy, scorned-ex-girlfriend trope on its head, and instead allows Ealy to slowly lose his shit onscreen while Lathan gets to play the sympathetic protagonist. Lathan also savored the lack of ageism inherent in the movie’s plot: “It’s just me onscreen, and I have two hot guys fighting over me and I’m not 20 years old,” she says.

Ask someone when they fell in love with Lathan, and they’ll likely point to Gina Prince-Bythewood’s 2000 rom-dram Love & Basketball, which cast Lathan as Monica, a flinty but deeply vulnerable young ballplayer lusting after her smooth-talking, similarly hoop-dreaming best friend Quincy (Omar Epps). Though Lathan grew up adjacent to the entertainment biz,1 guest-starred on sitcoms like Moesha and Family Matters, and dutifully gazed into the eyes of Epps and Taye Diggs in late-’90s hits like The Wood and The Best Man, Love & Basketball was her cinematic cotillion — the bildungsroman upon which she built the sturdy base of her early career.

It’s the film her fans rhapsodize about most, says Lathan, and, apparently, it still brings grown men to tears. Pal and frequent collaborator Prince-Bythewood laughs when describing what it’s like to go out with Lathan in public: “I’ve been with her when a guy came up to her and started crying. But she’s very gracious, and I know it’s gotta be tough, but she seems to handle it very well. He couldn’t believe he was face-to-face with her. She smiled and shook his hand and told him it was OK. Anytime you’re out with her, people will be coming up.”

Love & Basketball begat a series of charming, mid-aughts films told from the shamefully rare black female perspective, starring Lathan as various intelligent, independent women impervious to love until a Diggs or an Epps or a Wesley Snipes or a Simon Baker comes along and tears down her walls (sometimes literally, because they’re in the businesses of landscaping and construction, jobs that are very sexy in the movies but not when someone is performing them loudly outside your window).

Love & Basketball was her breakthrough, but it didn’t put her in the A-list and it didn’t make her rich. “I got paid the lowest you could get paid,” she recalls. “I remember I had a ’91 Honda Accord that I’d had for years. And I was like, ‘Once I star in a movie, I just want to get a BMW.’ And I couldn’t get the BMW, even after Love & Basketball.” From 2006 onward, not only did Lathan star in mostly mediocre movies, she starred in very few of them, and primarily as some dude’s thinly developed romantic interest. From Tyler Perry morality plays to sad-sack indies to Soderberghian thrillers, she toiled in films of widely varying quality.

Does this swath of unremarkable films and sporadic disappearances reflect the fact that Lathan is a black actress in an industry that’s only doled out one Academy Award for Best Actress to a black woman in the history of cinema, that casts non-white actors in only 16.7 percent of lead roles? Is this pattern a result of Lathan’s consistent refusal to give herself over to the press? Or is it because, as an actress over the age of 40 (Lathan is 43), she’s reached her last fuckable day?

It turns out some of it was by choice. “She’s never based her career on looks or being a star, but really going after good work,” explains Prince-Bythewood. “Early on in her career, she had about three films back to back that really put her on the map and endeared her to an audience, and people wanted to see more. But there was just a dearth of good roles. She doesn’t work as much as some other actresses, but she and I actually talk a lot, and I [tell her], ‘Stay special. Even when it seems like, “Wow, everyone else is working but I’m not,” choose your roles wisely, because you’re worth it.’ And I definitely think she’s done that.”

“You’d be surprised how much stuff out here is really bad,” Lathan says. “I’ve definitely been the bane of my agent’s existence sometimes. Something will be popular and hot, and I’m like, ‘No, I’m not interested, it doesn’t speak to me.’ It really has to be a story that I want to tell, or I want to see.” But because Hollywood struggles to service over-40, non-white, non-male constituents, the good work Lathan loves is rarely there for the taking.

In the past, she reluctantly auditioned for roles she didn’t want, and sometimes she got them — like Donna Tubbs on Seth MacFarlane’s The Cleveland Show2 and the lead in Alien vs. Predator. That’s one she won in spite of herself.

“I was dating this guy, newly in love with him, and it was Friday night, and [my agent] was like, ‘You need to go in for this movie Alien vs. Predator on Saturday morning.’ And I was like, ‘No! I don’t wanna go! And what is Alien vs. Predator?’” laughs Lathan, who rarely discusses her love life and says she’s “not over here worried about” whether she’ll ever get married. “I didn’t work on the lines and then in the morning I was like, ‘I’m not gonna go,’ and [my boyfriend] made me go. Which I love. Because it didn’t last. He turned out to be a real … It was a blessing in disguise that I got taken away to Prague after that, because I found out some things about him. But I’ll always kind of appreciate him because he was like, ‘No, just go!’ So I went and I read cold. It’s almost like I did everything in my power not to get it. And like a week later, I was on a plane to do a screen test in Prague with the Predator, who’s this 7-foot-tall German dude.”

These days, though, “I really don’t go,” she says. “I’m like, ‘No.’ I’m not gonna read for this role when there’s been a million things I’ve done you can look at. It gets emotionally exhausting to prove yourself over and over again. But also, after 20 years, nowadays, I will only audition if it’s really something I’m really passionate about.”

Somehow, though, Lathan remains unnaturally optimistic — almost serene — about it all, which is what’s allowed her to keep working (somewhat) consistently for nearly two decades. “There’ve been periods where I don’t work. But it always comes around,” she says. “I know a lot of white actors who would love to have my career. When I say that, I mean that’s how hard it is to work as an actor, period.”

Rather than waiting for meaty movie roles to trickle her way, she’s taking things into her own hands. The Perfect Guy marks Lathan’s first producing credit — she weighed in on everything from the initial concept to the script, something she says she’s been informally doing for years but never received acknowledgement for. She’s planning on continuing to produce her own projects moving forward, especially those that tell stories that reflect the world she knows. “It feels kind of crazy that we’re still in the 21st century having this conversation,” she says. “I know that if I don’t do these films, nobody will.”

As we wrap up our conversation and listen once more to the unholy moan of the construction crane that is plaguing Lathan’s neighborhood and psyche, I tell her it seems like she’s upped her standards even further as she approaches her 44th birthday and her third decade in Hollywood. She emphatically agrees. “I want to be more picky,” she says. “I feel like I’ve been doing it this long, I’ve been holding out for the things that really, truly inspire me. So there’s no reason to stop doing it now.” And even as Lathan holds tighter to her ideals, there are indications that Hollywood is finally coming around to the kind of women she wants to play — and, finally, coming around to Lathan herself. “People are recognizing her talent,” Prince-Bythewood says. “I think the more that she works, but choosing carefully … maybe her time will be right now.”