Staring Into the Eternal Bliss of Lauren Conrad’s Wedding Exclusive 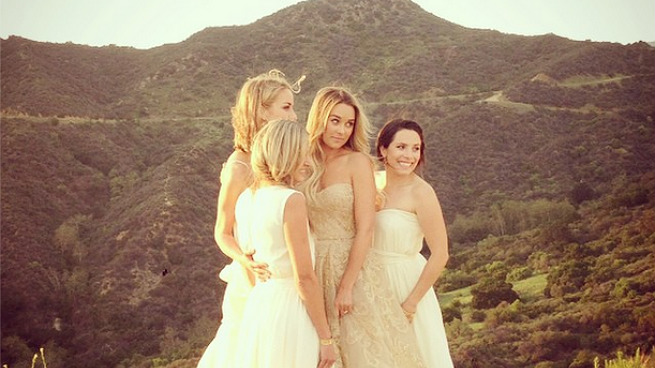 Lauren Conrad is our best friend. For eight seasons of television — on MTV’s Laguna Beach and The Hills — she served as our avatar in the Mystic Tanned playground of mid-aughts southern California, the girl deemed both aspirational and relatable enough to fuel a reality-TV empire. She never had to visibly climb or struggle, yet she always appeared busy. She’s the ur-carefree white girl, and unencumbered by a singing or acting career, she has the freedom to devote the whole of her professional pursuits (of which there are many) to being Our Girl. Wikipedia lists her net worth as $12 million.

Because Lauren is our best friend, we care about her wedding to former Something Corporate guitarist William Tell, and we shell out $5 for a physical copy of Us Weekly to see exclusive photos from the Santa Ynez ceremony and reception. Lauren Conrad has a lifestyle brand that Blake Lively would kill for; Lauren Conrad would have a lifestyle brand even if she didn’t officially have a lifestyle brand. So naturally, the exclusive reads more like a catalogue or a how-to manual than a tabloid story, a branded product name-dropped every other sentence. The lifestyle (i.e., mostly wedding) curation website Pinterest is the backbone upon which the entire operation rests; Lauren Conrad’s wedding seems to be the one mission Pinterest was put on this earth to do. Pinterest can retire now. As can XIV Karats, A Sweet Savory, Rifle Paper Co., and every other business that managed to get its name into the 10-page spread.

And yet we feel no outrage. A great calm sweeps over us. There is no betrayal here; on the contrary, Lauren Conrad’s wedding seems to be the fullest possible expression of Lauren Conrad. This is her Godfather trilogy, her Decalogue. If there is any negative feeling, it is the knowledge that most people can only bring about one true masterpiece in their lifetime; for Lauren, this may have been it.

The Us exclusive is filled with perfectly imperfect details. It was supposed to be a destination wedding, but they decided to have it just a couple hours up the coast from Los Angeles, closer to all their friends and family. (Lauren can’t have it all, but she can be close to the people she loves, which is what really matters.) LC decided at the last minute that she didn’t want sleeves on her Badgley Mischka lace gown, so she had them chopped off. (She may seem like a sweet, agreeable girl, but when she knows what she wants, there’s no stopping her!) Tell insisted on adding beef tenderloin to the chicken and fish dinner options — “I threw a wrench in the works,” he admits. (Tell is a beef-eating man’s man, which is so different from LC’s feminine aesthetic … but together they make it work!)

Lauren Conrad is part of the reason why we don’t need romantic comedies anymore — particularly romantic comedy heroines. How could we do better than the love lives of pseudoreality stars, particularly the high-gloss, ultraproduced world of The Hills? Though the show has been off the air for four years now (and LC hasn’t been on it for five years), that is the primary text of the Lauren Conrad experience; all subsequent ventures, i.e., her non–Adam DiVello–produced life, are sequels. We’ve followed the arc of her twenties, we’ve witnessed her heartbreaks and losses, we’ve been conditioned to root for her. We’ve rendered her tears in pastels. We’ve even waited long enough to get an alternate ending to her story. (Of course Lauren didn’t actually end up with her sometimes love interest Brody Jenner, but we knew that; a whole book could be written on The Hills‘ irreverent, freestyle relationship with documented fact.) Lauren Conrad’s wedding, and whatever comes next, is an afterlife of sorts, which is perhaps why reading about it is so soothing.

Lauren’s arc on The Hills ended with her leaving another, very different wedding, that of her ex-best friend Heidi Montag to all-time reality TV heel Spencer Pratt, after swallowing her pride and giving her blessing to the couple. Lauren bounced as soon as the ceremony was over, pulling on her oversize shades, her face reading more funeral than wedding. Lauren had grown up, we were being told. She was older and wiser than that girl we met in Laguna, but with that wisdom had come loss.

Heidi and Spencer’s wedding wasn’t a fairy tale affair for anyone besides the bride and groom (who, arguably to their credit, are still together), but as LC rode off in the car service, she smiled to herself. She knew this was not the end of her story. The rest is still unwritten, as it were. It was an open-ended coda — the kind only Sundance films and reality TV can get away with — and strangely satisfying.

Lauren’s exit from the wedding, and The Hills, and her friendship with Heidi, was intensely relatable, because when your best friend gets married you are saying good-bye to a chapter of your relationship to them, even if the bride isn’t a Hollywood-damaged maniac who has lost all touch with her soul. But Lauren is a special kind of best friend, because even though she is now Mrs. Tell, we know we will never really have to say good-bye to her. She will always occupy a stable, comforting, non-train-wrecky corner of tabloid culture. We can keep following her on Instagram and visit her website for smoothie recipes and quick ab-toning workouts. But if she ever gets bored of that, she can take comfort in the fact that she is an actual O.C. Housewife now; if she wanted to, and if Bravo’s flagship franchise is still running, she could get back into the reality game on the other show inspired by the mid-aughts success of The O.C. I can think of no more poetic next chapter for our best friend. LC without end, amen, amen.