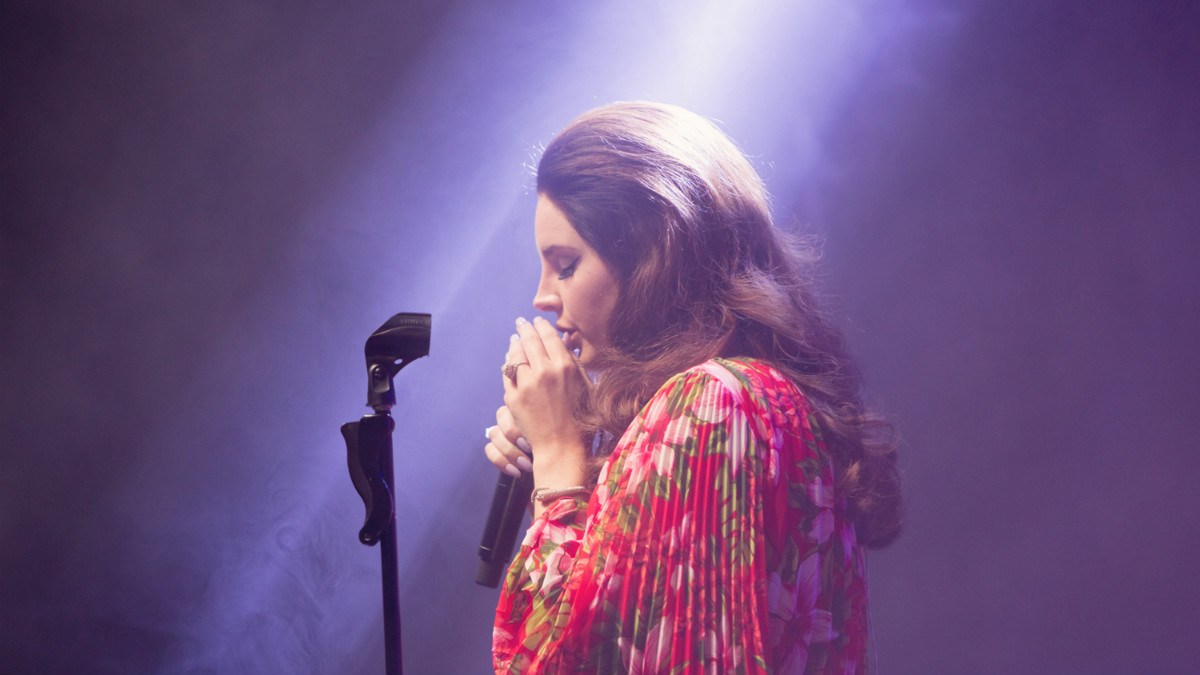 Lana Del Rey is Hollywood, Forever. For her to actually perform there is exhilaratingly superfluous. Whereas many of her female pop contemporaries continually try to find new ways to subvert their reputations or public images, Lana has been doubling down on hers with seemingly un-self-conscious emphasis since her early-2011 debut. Her performance on Friday, the first of two sold-out engagements at the famed Los Angeles graveyard, was the most obvious entertainment spectacle I’ve experienced in some time, but transcendently so.

Just a quick note of personal reference: I started out a Lana hater, like so many others. But when this tricky post-ironic game she was playing finally clicked with me, maybe a year after the release of Born to Die, I became interested in her, respectful of her. I decided there were some Lana Del Rey songs I liked, songs I hadn’t been able to admit to liking before. I went from dismissing “Off to the Races” as a pastiche-y collection of vocal affectations to appreciating it as a thrilling, nauseating, runaway train of a story song. “National Anthem” went from a vapid ode to American capitalism to a blissful, deeply cynical hymn of self-actualization. By the time her decidedly more deliberate, guitar-forward 2014 album Ultraviolence came out, I was fully converted. The decision to like Lana Del Rey felt both borrowed and completely personal, much like her music.

Lana didn’t have an opener for either night, but the line that formed outside the iron gates of Hollywood Forever was its own kind of confounding amuse-bouche. As Molly Lambert and I stood waiting, evaluating the sartorial elements in play (flower crowns, Marilyn T-shirts, freshly purchased Doc Martens, waist-tied flannel), a loud buzzing filled the air, and, I shit you not, a drone rose up over the walls of the cemetery and above the crowd, hovering and looking down at us, I assume (although who can say!) documenting the growing multitude. Shortly after that, something happened near the gate — did someone spot Lana frolicking among the tombstones? Did the drone start firing poison darts? I will never know — and with almost no warning, the mannered, taped-off queue was quickly trampled as everyone ran for the entrance. “That was the stupidest thing I’ve ever seen,” muttered some like-minded concertgoers nearby. Everyone over the age of 27 in the general vicinity, who by default found ourselves at the end of what used to be the line, seemed to agree. For the next half hour we were in a pushing throng, all trying to get past two ticket takers stationed at the entrance, Hot-N-Ready pizzas from the Little Caesars down Santa Monica and open bottles of champagne held overhead out of the crush. If nothing else, Lana Del Rey fans do picnics right.

By the time everyone in our party got through, it was nearly dark, and as we began to make our way toward the stage along the darkened roads of the cemetery, I remembered why this was one of my favorite places to see a show in Los Angeles. It has all the nearly-year-round pleasures of an outdoor venue in this city (70-degree autumn nights, sorry ’bout it), with none of the complicated logistics and overpriced gourmet picnic baskets. Lana wasn’t scheduled to go on for another hour, so we set down our blankets back in the over-27s section, surrounded by tombs illuminated in neon blue and green, and dug into our BYO wine and sandwiches as the last of the daylight silhouetted the palms in the west. It was already the most Los Angeles thing I’d done that month, and Lana wasn’t even onstage yet. 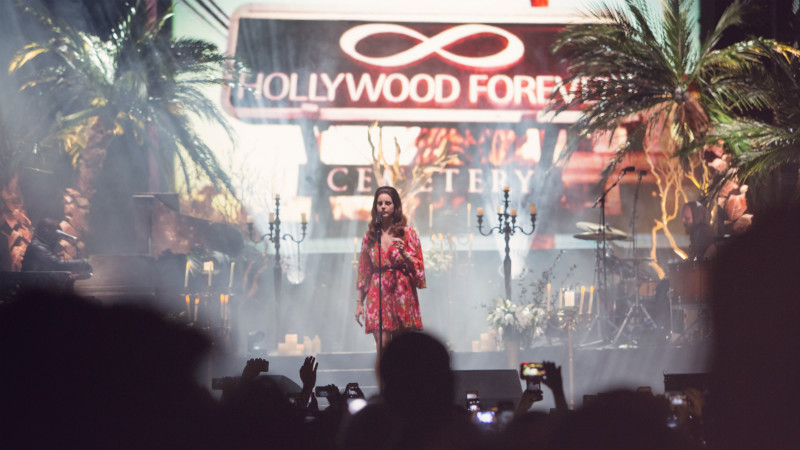 When she did arrive, it was in a billow of fog, flanked by her band and a collection of fake palm trees and gothic candelabras lit with flickering LED votives. She may as well been surrounded by Lana Del Rey emojis. (The official LDR emoji sequence, according to me: cry face, cigarette, American flag, dollar bill stack, another cry face. Which bears striking resemblance to the official emoji sequence for no. 1 Lanahead Kanye West.) She didn’t talk much and went right into “Cruel World,” the opening track from Ultraviolence, as people ran toward the standing section at the front. As she reached the line “Put my little red party dress on,” I turned to Molly and said, “Wait, isn’t she actually wearing a little red party dress?” She was — and her hair was up real big, beauty-queen style. But she seemed in much better spirits than her songs’ questionably autobiographical heroines, smiling and expressing her gratitude for getting to play these shows with quiet sincerity.

She spoke only a few more times — to reminisce about last year’s L.A. premiere of her short film Tropico before doing “Body Electric,” and to mention how much she loved Ultraviolence before performing “Ultraviolence.” “I want a cigarette,” she intoned in a despondent almost-baby voice before “Million Dollar Man,” which might have been my favorite part of the whole night. (The request, not the song, which I left during, to buy an official T-shirt that looked suspiciously — likely intentionally — like a bootleg.) She smoked either two or three cigarettes over the course of the night, all while swaying and swinging.

Before and after the show, my friends and I compared notes on what we thought we knew about Lana — she lives in Koreatown! She doesn’t drink or do any drugs! She used to be in a cult! — but none of it was 100 percent confirmed fact, which is the great fun of Lana Del Rey. She’s a great, provocative-yet-evasive interview, but onstage, she is a closed book. She played only 10 songs, with no encore — barely a festival set, which I was tempted to feel disgruntled about. But the gesture of her being there, where Hollywood goes to die, in front of a relatively intimate crowd of frequently tearful, flower-throwing fans, was statement enough. And there was free water. C’mon.

She closed with “National Anthem,” and my friend and I, wearing our brand-new LDR shirts, took off running toward the stage, shouting, “YES! YES! YES!” when Lana’s man asked if we wanted to party later on. Part of me felt as if I were acting something out, as I sang along and the stage lit up in reds, whites, and blues. I wondered if I were just putting on a show as my signature beloved character, Lana Del Rey Fan. And then part of me felt as if I was actually really doing what I wanted to be doing in that very moment, in my heart of hearts: watching Lana Del Rey perform at the Hollywood Forever Cemetery. What can I say? Everything I know about sincerity I learned from Lana.

'The Knick' Finishes Its Brutal, Triumphant First Season As the Scariest Show on TV