‘The Knick’ Finishes Its Brutal, Triumphant First Season As the Scariest Show on TV 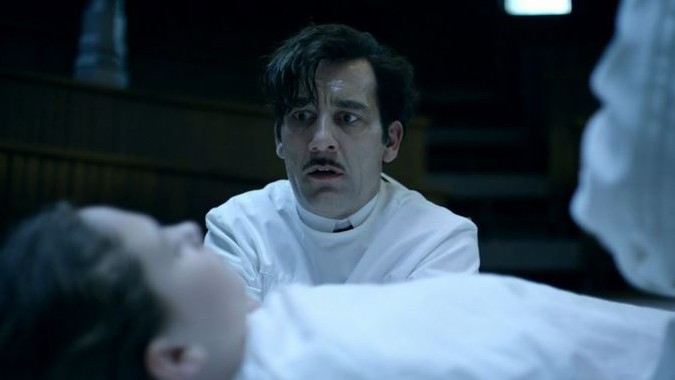 The Knick, which concluded its blistering first season Friday night on Cinemax, has been correctly labeled many things. It’s a historically fascinating medical show, an exclamatory period piece drawn as tightly and sharply as a lady’s corset. Thanks to Steven Soderbergh’s restless camera, it is, as Matt Zoller Seitz wrote so well in New York Magazine, a bravura master class in the art of directing for the screen. And it’s a game- and conversation-changing success for Cinemax, a network previously best known for depicting bodies in slightly more pleasurable states of duress. But above all else, what these 10 deeply unsettling episodes proved was that The Knick is a horror show. And perhaps the most disturbing ever to air on television, at that.

With the steely precision of a surgeon — a sober surgeon, mind you — The Knick slices through the thin membrane that separates imaginary monsters from the abject terror of being human. The infectious germs that haunt the halls of Knickerbocker Hospital don’t turn people into zombies and they don’t cause them to sprout blood-sucking tentacles from their throats. The germs simply get people sick, often fatally so. And no one is immune. In a month in which New York Times headlines have proved to be more frightening than any fiction, The Knick played less as entertainment and more like a waking nightmare. The show offered little release and absolutely no escape. Its power lay in the way it refused to transport viewers. The dread that crept out from the screen was in our living rooms all along.

“Crutchfield,” Friday’s season finale, began with Cornelia taking a slow wagon ride away from the hospital in pursuit of a grim operation. Her wisecracking Charon? None other than Tom Cleary. “In matters of the flesh, it don’t really matter how fancy the table is you’re sitting at,” he barked. “Everyone gets hungry.” Cleary was talking about sex, of course, but his words hinted at even darker appetites: the way cancer cells feed on everything in their path; the way Thackery’s insatiable desires have devoured him from the inside out. After watching the first few episodes of The Knick, I wondered how it was that anyone was able to survive the charnel house that was planet Earth in the time before modern medicine. Now, I realize that no one truly managed to remain unscathed. Rich and poor, clean and dirty, wise and foolish: Everyone is a patient on The Knick, eventually. No matter how much we fight and claw and innovate to pretend otherwise, the arc of humanity bends inexorably toward decay.

This, more than any X-ray or endoscope, is the most accurate of The Knick’s observations, and the most damning. On The Walking Dead — a show I actually find much improved in its fifth season — the human body is a vessel. The zombie contagion hijacks its victims in the most appalling and invasive way imaginable. But to the survivors, their bodies are treasure chests, protecting the magical spark that allows for compassion, ingenuity, and near-perfect aim. As long as our grubby heroes are able to stay uncompromised and unbitten, their bodies will sustain them. The Knick reimagines the body as a villain. It betrays our protagonists at nearly every turn. Lust can lead to impossible pregnancies. Casual contact can lead to contamination. Obsession can lead to madness and death. The enemy doesn’t just resemble us. It is us.

A mercy bullet to the brain of a fallen comrade seems humane in comparison to what goes on in The Knick: doctors ripping out teeth to root out madness, hacking at the heart to keep it from falling silent.  The beautifully framed, horrifically realized shot of Dr. John Thackery, his arm splayed open like a barn door, literally bleeding into a sick little girl in order to save her, may have been The Knick’s most revealing moment. With a toxic speedball of creativity and martyrdom, Thackery hoped to defeat the disease ravaging his patient. Instead, he may have destroyed them both. For that, you could blame hubris or you could blame cocaine, the ubiquitous pumpkin spice of the Gilded Age. But from our vantage point in the 21st century, we can afford to take the long view. The weakness afflicting the girl was in Thackery, too, and it had been all along. It’s called mortality and, once diagnosed, it remains uncurable.

I’m sympathetic to those who checked themselves out of The Knick early. Its grim point of view doesn’t provide much pleasure — though the unparalleled production design often does. The handful of hours following the astonishing riot episode were an especially brutal slog. It was brilliant to behold but painful to see the good Dr. Thackery vanish in an agonizing haze of withdrawal, leaving only a ravaged Mr. Hyde in his wake. Clive Owen has a movie star’s hairline and charisma but his strengths are those of a character actor. Who else would allow himself to go so sweaty and slack, to play the unpretty truth of addiction — that, by the end, it’s not a noble struggle, but a capitulation? Owen’s clammy mania put to the lie the suggestion that Thackery was yet another of cable’s strident male antiheroes, proudly trampling over morals in pursuit of their illicit goals. Thackery is both a genius and an addict, and it’s impossible to consider one without the other.

Of all the things written about Soderbergh’s astonishing direction, what struck me most at season’s end was its lack of sentimentality. The Knick doesn’t flatter its audience with small victories or happy endings, and Soderbergh is openly contemptuous of decades of TV orthodoxy. When something doesn’t interest him — like the B-plot of Bertie romancing Nurse Elkins — he actively looks away. And when something does hold his gaze, he refuses to blink: In the pilot, Soderbergh shot Thackeray — perfect mustache, immaculate gown — like a statue of a Roman god. In the finale, the same director captured the same character as a pile of rubble. Is Eve Hewson a brilliant actor or a terrible one? To Soderbergh, it doesn’t much matter. On The Knick, he used her eerie stillness as a paintbrush, dulling the noisy colors of those around her. Of course, that’s the same volume that lights the brilliant André Holland from within. And so, to depict the furious struggle of Dr. Algernon Edwards, who spends his days turning the other cheek and his nights punching back in alleys and bars, Soderbergh merely hits record and gets out of the way. A good director knows how and when to take performances. A great one, like Soderbergh, knows how to graciously receive them.

The only thing conventional about The Knick’s first season was the tumult in which it ended: Cornelia married to the wrong man, Algernon unconscious in the street, the hospital board voting to move uptown, a rehabbing Thackery — his miserable journey from white shoes to white horse complete — awash in a heroin haze. Though I can’t say I’ll miss the show’s cruel severity during its hiatus, I’m awfully glad it will be returning sometime in 2015 with Soderbergh, once again, at the helm. Watching these rough surgeons combat both ignorance and inevitability isn’t just a necessary corrective to a generation of sanitized medical dramas, it’s a difficult reminder of a rarely televised truth: No medicine is perfect and no surgery is bloodless. Though set in a different century, the scariest part about The Knick is that it still feels too close for comfort. It’s not an easy watch but it is essential. In television as in life, sometimes the cure is worse than the disease.