Not Even Corey Stoll Can Save ‘The Strain’ From Its Infectious, Fatal Stupidity 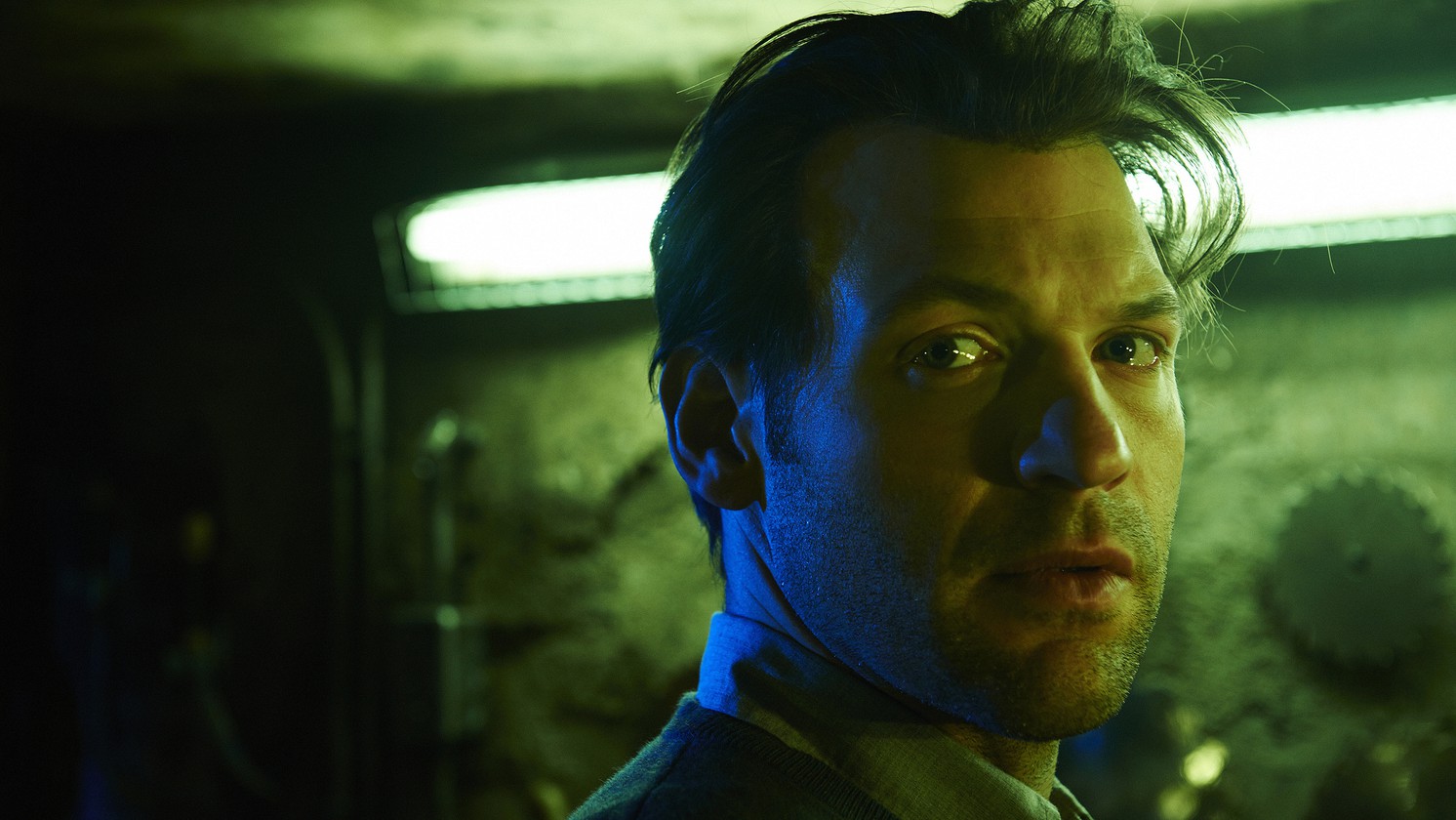 To paraphrase a Russian with a better accent than Kevin Durand, every bad television show is bad in its own unique way. Some frustrate because of wasted potential. Others infuriate due to clumsy incompetence. And then there are shows like The Strain, which are so deeply dumb that it’s hard to work up much of a reaction at all.

The Strain ended its first season last night on FX much the way it began: striving for high camp and barely clearing the bar for lowbrow kicks. I actually admire The Strain’s gonzo joie de mort: It takes guts — or at least a pair of what Bolivar used to have — to attempt to pull off a vampire invasion of New York City on a basic-cable budget. But again and again The Strain’s tentacle throat-mouth writes checks its smooth bottom half can’t manage to cash. This is a show about vampires, yet the vampire masks appear to have been bought on discount at a Halloween superstore. It’s a show in which even the most accomplished heroes pause to deliver a killer line before delivering the death blow (just so the big bad can safely get away), and where even the unturned characters speak and act like the undead. (Shouts to Mr. Fitzwilliams, who last night delivered his long-overdue cry for independence without moving a single muscle in his body. “Yes, I am complicit,” he droned, with all the emotion of a Tandy 1000.) When Dutch recognized a ghoul from “a gallery in Soho,” a smart show wouldn’t have had her hesitate, it would have had her open fire immediately.

Needless to say, The Strain is not a particularly smart show. Nor is it, I must say, a consistent one. Sometimes The Strain suggests that Manhattan, in the span of a week, has transformed into a dystopic failed state of roaming monsters, petty crime, and random explosions. Other times, the easygoing traffic on the Manhattan Bridge resembles a summer Sunday morning. I’ve seen New Yorkers more upset when the F train isn’t running than they are in Day 5 of a supernatural slaughterfest. Worse, The Strain doesn’t even pass basic geography: Three weeks ago, Zach Goodweather was able to use an old, battery-drained laptop (OK) to track his mother’s iPhone (fine), despite the Internet being down (sure). The live map he shared with his father clearly showed the phone in Brooklyn Heights. “She’s in Astoria!,” Eph Goodweather declared before running off to find her. That wouldn’t be a big deal if the Toronto-filmed show didn’t lead off nearly every scene with a nonsensically specific bumper. (118th Street; Harlem; etc.). Don’t tell me where you are if you can’t even manage to get there!

Yes, the show is fantasy, but come on. There was gravity on Tatooine, you know? On The Strain, it often feels like the rules are being made up as they go along. To wit: There is an entire city feeling the effects of a monstrous plague and yet the only ones interested in putting a stop to it are a senior citizen, an exterminator, two doctors, and (ugh) a hacker? (Did it occur to no one to maybe knock on the door of a fire station or police station?) The white worms are predatory and infectious, but no one bothers to wear masks or gloves. Vampires die in the sun except when they don’t. Vasiliy Fet’s goatee appears to change color from week to week. If The Strain doesn’t care enough to follow its own internal logic, why should we bother to try?

I can give you one good reason and one good reason only: Corey Stoll. As CDC doctor Ephraim Goodweather, Stoll is the beating, uninfected heart of a show that is dangerously lacking in brains. Over the past 13 weeks, Stoll was able to overcome leaden dialogue, nonsensical decision-making, and a fakakta hairpiece that would be better served on Animal Planet. He’s won me over even as Goodweather and his team have, piece by piece, lost an entire metroplex. As television increasingly surrenders to blockbuster excess, Stoll’s particular skill set has become even more attractive, not to mention valuable. There are few actors as gifted at communicating a simple, basic humanity. Through a combination of pluck, modesty, and everyguy charisma, Stoll is able to ground even the nuttiest flight of fancy.

Consider Stoll’s recent CV. In Midnight in Paris, he morphed Ernest Hemingway from cliché into character. On House of Cards, Stoll was the one warm body on a show beset by rampaging frost giants. (And it’s no surprise that all the heat left Cards when he did.) And last night on Homeland, [SPOILER AHEAD] Stoll made a brief-but-effective appearance as Sandy Bachman, the head of the CIA station in Islamabad. Though there are no vampires on the struggling Showtime drama, there are plenty of bloodsuckers and more than a few cartoons. In his limited opportunity, Stoll provided a glimpse of what a harried intelligence professional not under the spell of Claire Danes’s increasingly toxic Carrie Mathison might look like. And, in so doing, he gave much-needed legitimacy to a show with a worldview that had become as perilously bipolar as its heroine. The first time you see Stoll’s face, you might not remember it. But you remember him: his chatty-casual way of speaking, whether he’s demanding drone strikes, urban quarantine, or the qualities of a good prose novel. You remember the way he appears to have lived in the character’s skin for as long as that character has been alive. And whether he’s weaselly or heroic, you remember wanting to know everything it is that he knows: Why he’s done what he’s done, why he is who he is, and what it means for what happens next.

What’s funny about the plight of Stoll on The Strain is that those behind the scenes — Lost co-boss Carlton Cuse, novelist Chuck Hogan, filmmaker Guillermo del Toro — don’t seem to realize what it is they have. Rather than let Stoll carry the emotional load, they continue to toss heavy-handed schlock at the audience like mice in a Krazy Kat strip. Here are constant references to the Holocaust and 9/11, actual tragedies used as emotional kindling to distract from The Strain‘s own weirdly uncurious, dispassionate gaze. Here’s Nora’s senile elderly mother, packed into the pawnshop for no purpose other than to die, like a chain-smoking worm on the world’s most aggravating hook. (Attention apocalypsemongers: Can we please give a rest to the scene in which the hysterical, grieving woman is forced to mutilate the corpse of a recently deceased loved one? It doesn’t make them look tough or cool. It makes everyone look insane.) And here’s yet another apple-cheeked adolescent boy shoehorned awkwardly into a story to make the end of the world feel personal, 1 as if the end of the fucking world wasn’t the most personal story possible. Corey Stoll alone is capable of making me feel sad about Nosferatu taking Manhattan. Why can’t The Strain just let him try?

It’s this strange disconnect that disappoints most about The Strain. Winking grindcore horror can be fun, even for those who dislike the sight of blood. But The Strain isn’t nearly crazy enough for its convictions. (Give me Penny Dreadful any day. That show is insane, but at least it has style.) Nor is it serious enough to be taken straight. (I never thought I’d find myself longing for the relative subtlety and restraint of The Walking Dead, but here we are.) The thing is, there’s actually a fascinating story to be told about the fallibility of the American health care system and the scary reality of how vulnerable we human beings — with our soft skin and hot blood and frustrating lack of pointy ears — truly are. But that story is being told right now in the papers and on 24-hour news. The Strain is busy chasing shadows in the dark. Even the recently turned know an empty vein when they see one.