‘The Strain’ to Lose Its Most Monstrous Creation of All: Corey Stoll’s Wig 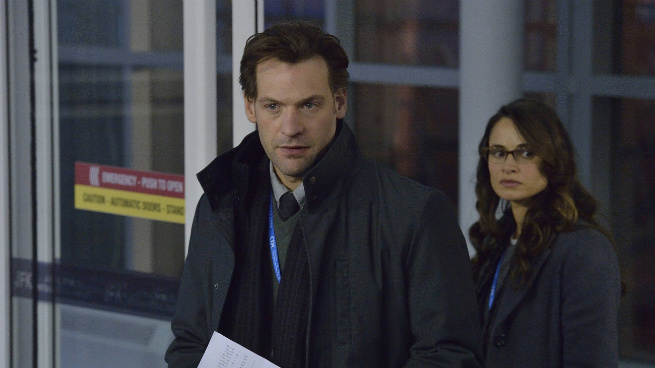 [SPOILER ALERT: The following contains plot details about FX’s The Strain, including information about a major character/hairpiece’s death.]

After a barrage of mockery, The Strain’s producers have decided to reveal one of the first season’s big plot twists in advance: Corey Stoll’s bad wig is not long for this world. Yes, The Strain will be killing off the Stoll-piece, which has been lambasted since day one for lessening the shine of America’s Sexiest Bald Actor, a title Stoll clearly won during his run as Peter Russo on House of Cards. You see, fans were so mad about the tangled widow’s peak of straggly hairs on Stoll’s head that the buzz over his bad wig was threatening to overtake the buzz about the show’s true stars: the eye-worms. Guillermo del Toro has said before that he spends all his money on rubber monsters, and the preserved human heart colonized by stringy, ravenous eye-worms should have been the glimmering bloody SFX highlight of the first episode. But all eyes, and eye-worms, were instead turned to the atrocity on top of Stoll’s head, which indeed looked like a foreign parasite leeching his will to live.

Del Toro could not stand to see his worm babies ignored in this fashion, and so he told the audience at the Television Critics Association yesterday that Stoll’s wig will get the ax before season’s end. But for dramatic reasons only! This won’t be a stunt death; it’ll be a character-motivated part of the plot. It feels very Lost-y to jump in and imply that everything will make sense soon because [reasons], especially coming from showrunner Carlton Cuse. If showrunners want to be treated as infallible godlike beings whose intentions should never be questioned, they really need to maintain radio silence about fans’ complaints. Del Toro didn’t mind spoiling the wig death, though, because he wrote the books the show is based on, and if you’d read them you might have already suspected that Stoll’s rug is not long for this world.

Del Toro told the TCA, “If you know the books or where it’s heading, we needed the character to change his look, to be able to mix into the normal population without being seen. We needed him to have a look that could be altered … and unless he grows a beard or has an eye patch, we needed somewhere for him to go.” Cuse chimed in to say, “Our vision of this character has to move from point A to point B and that was part of the conception of character.”

You see, everyone? Ephraim Goodweather will go from point A (hair, no eye-worms) to point B (bald, world overridden with eye-worms). So at some point in a future episode, Stoll’s wig will be ripped off his head and devoured by the eye-worms, prompting a new group of viewers to go “ohhhhh, that guy” when Peter Russo’s hairless dome is revealed.

Stoll, for his part, has said he likes the wig because it helps him get into the character of “Eph” and considers it “a mask.” He’s had good luck with wigs before, just not this one. But I don’t think the issue was that he wears a wig so much as that the wig was not a very well-crafted one. Next time get whoever did the much more realistic wig Stoll sported in Midnight in Paris to play Ernest Hemingway.

Where Were They Then? The Surprisingly Deep Bench of Rom-Com Supporting Actors