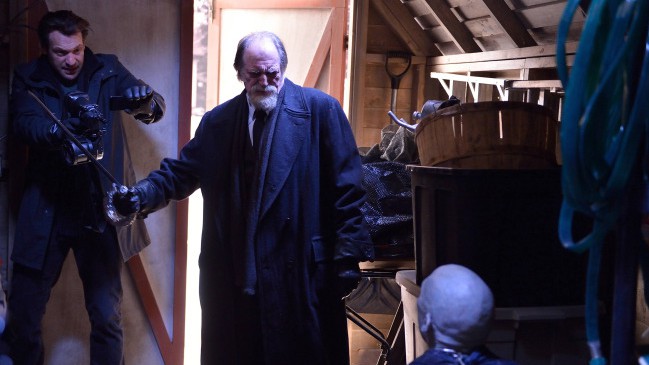 Every summer, the multiplex provides a master class in the apocalypse. For the price of a single ticket, it’s possible to sneak from theater to theater and see the world end in a dozen dazzling ways. Will it be overrun by alien robots? Trampled by giant monsters? Upended by damn dirty apes? Or drowned in the hollow half-shell of nostalgia? As budgets have soared along with audience expectation for spectacle, the priorities of filmmakers have changed too. One of the joys of the big screen used to be the way it served to illuminate the world. Now that screen is primarily devoted to illustrating the end of it.

As this blockbuster sensibility has begun to infiltrate the smaller screen of TV, it’s been interesting to see how both stories and storytellers have been forced to adjust. There’s no reason why television can’t tell stories about end times; what can’t be shown in spectacle can be made up for with specificity. If movies excel in turning major cities into scrap metal, then, theoretically, TV might offer an opportunity to humanize some of those pesky normals dodging the debris. As a partisan, I’d even make the argument that TV might be a better medium for conveying the true cost of doomsday destruction. A stray moment of normalcy — a resigned chuckle, a heartfelt tear — is a more valuable narrative tool than even the most cutting-edge CGI. It’s not enough to annihilate the world. We have to be able to recognize it before it crumbles into dust.

It’s for these reasons and more that I was heartened by what went down two weeks ago on The Strain. The FX horror series got off to a bumpy start last month as it struggled to find a consistent tone. Were the eel-tongued vampires meant to be scarier than the dreadful dialogue? Was the crusading, milk-swilling Dr. Ephraim Goodweather meant to be celebrating pulp traditions or drowning in them? The Strain seemed to tip its hand in the final moments of the third episode when plane-infestation survivor Gabriel Bolivar watched with mild curiosity as his genitals fell into the toilet bowl with a sickening sploosh. This wasn’t just gory or gratuitous – this was full-on weird. As Bolivar turned to the camera, revealing his newly Ken-like appearance, The Strain seemed equally liberated. (Hello! The episode was called “Gone Smooth”!) Perhaps this was the first step toward the show’s brighter future, one blissfully free of the same old apocalyptic binaries — good guys/bad guys, clichéd emotions/pureed innards — and willing to embrace and possibly even laugh at its own extremity. What happened to Lil’ Gabriel was plenty off-putting, but the humor behind it was precisely the opposite. In the wake of The Walking Dead and Game of Thrones, nearly everything has been shown on television, from heads popping like melons to intestines wriggling like snakes. But wit remains as rare as a red-crowned crane.

Two weeks later, our old friend Bolivar might be walking more lightly — not to mention treating crumpling-up freelance urologists like drained packets of Capri Sun — but the show itself is still burdened by the same old balls and chains. “Runaways,” last night’s dispiriting episode, saw the vampire virus begin to spread throughout New York: Thirsty victims are trampling through the sewers, scaring off rats, and a few of them are even making their presence felt on the surface. In the episode’s only burst of inspired madness, a murderous tongue-monster crashed into the lobby of a Brooklyn elder-care facility and began feasting at will. There was something so shockingly banal about the way director Peter Weller — yes, RoboCop — framed this scene that it actually shook me up. The only thing scarier than a horde of vampires is a single vampire doing something terrible in an absolutely ordinary way. This wasn’t Dr. Goodweather and his team taking the fight to the enemy. It wasn’t even a fight. It was a glimpse of pure loss, which was precisely what made it so effective. 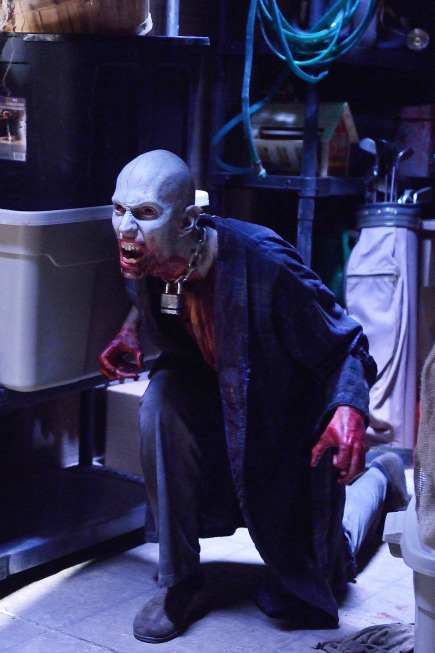 The rest of the hour ran in the opposite direction. I’m actually a fan of Strain creator Guillermo del Toro’s fixin’s bar approach to culture — his enthusiastic fusion of high- and low-brow is what made Pan’s Labyrinth and the Hellboy movies so strange and moving — but The Strain isn’t strong enough to support his ambition, or his appetite. Last night delved deeply into the history of the oddly spry nonagenarian vampire hunter Abraham Setrakian. This required a series of extensive flashbacks to World War II: Abraham, his brother, and mother packed into a train car en route to a concentration camp; the family being violently ripped apart upon arrival; the casual sadism of the Nazi guards. Atop this all-too-familiar tableau, The Strain laid the heavy blanket of its own mythology. In the show’s universe, Jews like Abraham and his brother weren’t just killed by disease, starvation, torture, and despair — they were also used as human-size feedbags for tentacled vampires. I suppose The Strain is attempting to suggest something profound about the depth of evil in the world, but it struck me as cheap and cynical. The Holocaust was plenty heinous without adding fictional monsters to it. The Strain hasn’t earned the right to play around with history like this. It needs to make a case for its own horror without skitching on the back of something far more terrifying and true.

But the reality is, without the weight of Abraham’s story — and, it must be said, the vigor with which David Bradley plays it — The Strain remains as flimsy as Corey Stoll’s much-maligned hairpiece. The show continues to try to have it all ways: relishing in the looming massacre in Manhattan while making only the lamest attempts at humanizing it. (Mía Maestro is an engaging actress. I wish she were given a character to play instead of a boilerplate backstory. Has there ever been an Alzheimer’s patient onscreen who wasn’t blessed with moments of remarkably plot-friendly insight?) Building up Stoll’s Goodweather as a virtuous hero is fine, but not when all the villains are pure cardboard. (Mr. Stoneheart’s quest for eternal life! Evil Administrator’s quest to not do his job properly!) For all the myriad pleasures of watching the eternally engaging Stoll and Bradley chase scrambled eggs with whiskey — and the gaga lunacy of Abraham’s silver-nail gun — these little moments seem like side effects to the show’s main affliction: a downright zombie-like lack of brains.

A smart way for The Strain to stand out would be to keep dicking around in the gonzo fringes, located somewhere between Vasily’s vermin-fueled good cheer and Bolivar’s manscaping. But instead of owning this insanity, The Strain keeps backing away from it like Sean Astin in a morgue full of white worms. This reluctance is there in the show’s strange obsession with geography: Why should I care about the street where The Wire’s Jamie Hector is fencing cars when I haven’t been given a reason to care about him in the first place? And it’s there in the broad-stroke phoniness of its supporting characters: Gus, the gangbanger with a heart of gold! Joan, the lawyer with a cash register where her heart should be! Whatever it is poor Regina King is supposed to be doing! The Strain hoards archetypes like antibiotics. A world populated with zeroes like these isn’t one worth mourning.

We Went There: Jarvis Cocker Judges a Pulp Karaoke Contest in New York