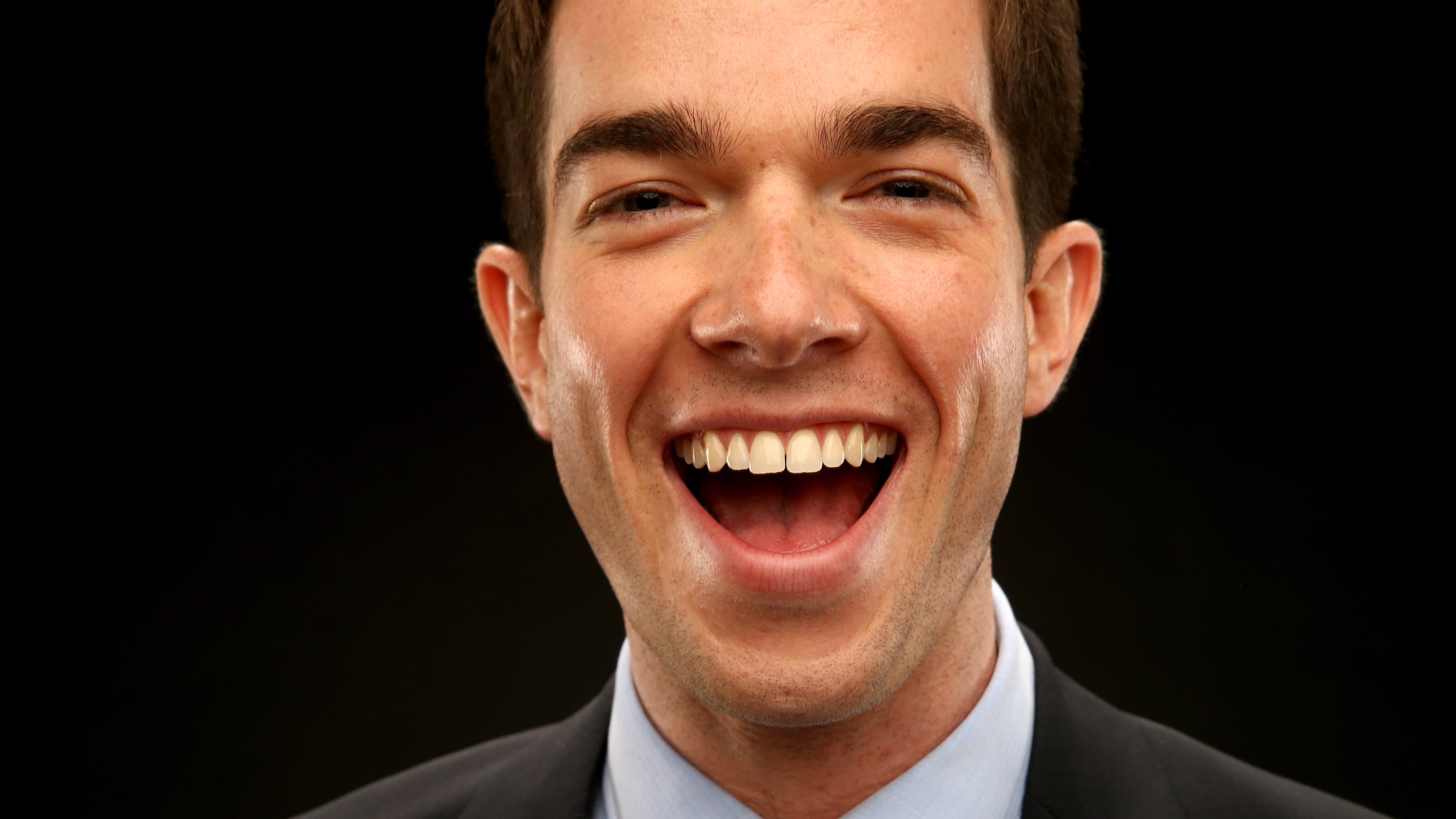 Fox’s new sitcom Mulaney is really not as bad as the reviews that trashed it made it out to be. It seems foolish to write off the show after three episodes, because it is so promising for some of the very reasons critics seem to hate it. Mulaney is an unabashed throwback to the multi-camera sitcoms that once dominated TV, especially NBC’s ’90s shows, most blatantly Seinfeld. What’s the deal with being bothered that a show emulates Seinfeld? It was a high-water mark for intelligent, dark sitcoms that aired on network television.

Mulaney’s Seinfeldian non-acting1 is supported by the great Nasim Pedrad (as the Elaine character) and Seaton Smith. Veteran comedic talents Martin Short and Elliott Gould are Mulaney’s boss and weird neighbor, respectively, and they are both so outstanding that the show is worth watching for them alone. If you can’t wring a laugh out of watching Short frugging his way down from a game-show host podium to meet and greet the contestants, or the sight of Gould cloaked in turquoise necklaces as a mellow hippie enjoying his retirement years, we probably don’t share a sense of humor. I laughed hearty laughs along with the laugh track, the audience of ghosts laughing with me to make me feel more comfortable laughing. I laughed when a doula played by the always-great Maria Thayer used the phrase “heavy bloody show” over a shot of marinara sauce being poured on spaghetti. I laughed when Motif (played by Seaton Smith) made up a stand-up bit called “Problem Bitch,” which becomes an instant hit for no other reason than the line, “If you don’t know a problem bitch, you the problem, bitch!” I laughed my brains out when Short’s vain game-show host character, Lou Cannon, leaned in to flirt with a comely contestant by saying, “Cathy, Cathy, Cathy. I love the way your makeup smells.” Mulaney may not be great, but it’s still better than 99 percent of TV. At one point during the second episode, Lou remarks, “What is with all the changes to the show?,” meta-commentary about the still-mutating Mulaney. But if you’ve seen the first season of Seinfeld, you know that it could have very easily been axed after a couple episodes. It needed time to establish its specific rhythms and the leeway to work out the kinks. Elaine isn’t even in the pilot!

Mulaney may share a form with Seinfeld, but it also shares a function: trying to push forward the old warhorse that is the network sitcom. Mulaney aims to demonstrate that sitcoms that use a multi-camera setup, recording action on a set before a live audience with several cameras at once, don’t have to be like the critically reviled but insanely popular The Big Bang Theory. Multi-cam has a long, storied history in TV. But in recent years, the single-camera approach has been associated with edgier TV. Mulaney, like Seinfeld, is making a bet that the old format can seem new and weird. Mulaney is ambitious and unpretentious, in a traditionalist, purposely theatrical, all-sitcoms-are-descended-from-vaudeville way. The problem isn’t that it’s too odd for the traditional format to make a good show, the problem is that it’s not odd enough. The characters are good and the show is well cast, but it’s hard not to wonder what it would be like if they were allowed to be even weirder, freed entirely from being relatable.

The strange path that Mulaney took to get on air suggests what a strange moment it is for sitcoms. NBC rejected Mulaney even though the network’s TV studio owns the show, it stars SNL alums, and it’s a love letter to Seinfeld-era NBC. But Fox pulled up quick to retrieve it. Fox sitcoms have always had an anti-traditionalist bent, owing to its status as a onetime last-place network; it built a brand on Married … With Children and The Simpsons. But today no network is the edgy network. Edginess has been outsourced to cable channels like HBO, FX, and Comedy Central. The edgiest sitcoms are anti-sitcoms like Louie, Girls, and It’s Always Sunny in Philadelphia. While the networks desperately try to find success with half-hour rom-coms (A to Z, Marry Me, and Selfie), FX’s You’re the Worst walks off with all the accolades for reinventing the genre (and rightly so). The funniest sitcom on TV is Broad City, which experiments with narrative in a way that networks would never allow. The current edgiest sitcom isn’t even on TV, it’s on Amazon Prime; Jill Soloway’s heartbreaking and deeply funny Transparent could be considered a sitcom by virtue of its half-hour length. Cable sitcoms can do things that network sitcoms can’t possibly attempt, for fear of scaring off audiences and advertisers. And so new network sitcoms are caught between a rock and a hard place; they can either attempt to keep up with cable and the Internet and fall short (because they lack certain creative freedoms), or they can aim to recapture the nostalgic feeling of tradition that is implicit in the sitcom genre (and fail because it feels stale and stodgy).

There was nothing inherently wrong with the multi-cam setup. The best traditional multi-cam sitcoms remain totally watchable. It was good enough for I Love Lucy, The Mary Tyler Moore Show, All in the Family, The Cosby Show, and Friends, all of which still thrive in reruns and on web-watching clients. They are merely different from single-camera, not better or worse. There is a pleasure in the extreme conventions of multi-cam: the roughly three jokes per script page, the uncanny feeling of being in spaces that are clearly stage sets, even the laugh track, an eerie and failed attempt to make the audience feel surrounded by friends.2 Multi-cam sitcoms continue to draw big audiences, like Theory and its cousins on CBS; they just lack the “coolness” factor of single-cams. A false binary has emerged: multi-cam shows are successful and shitty, and single-cams are experimental and smart.

The single-camera style became entrenched during the 2000s as a noncontroversial marker of edginess and experimentalism.3 Otherwise traditional family sitcom Modern Family became a successful fresh take on the genre by using a single-camera format. But by the time Modern Family premiered in 2009, the single-camera style was already becoming rote. While the style initially meant a break from the formal conventions of sitcoms, it quickly gained its own store of equally rigid tropes — like the faux-documentary format of The Office, Modern Family, and Parks and Recreation, with their talking-straight-to-the-camera “confessional” shots — which were patterned off reality television and feature films.

Mulaney’s impulse to update the multi-cam show makes perfect sense, the same way that the single-cam revived the genre by breaking with it. By using multi-cam, Mulaney feels both rebellious for refusing the “smart” single-cam status quo and like a call for a return to tradition. The most practical argument for single-cams is that it’s hard to maintain the feel of spontaneity in a joke when you’re doing dozens of takes for a live studio audience that is bound to become restless and bored waiting for the endless resets. As a stand-up comedian, Mulaney is a genius at making an observation he has repeated thousands of times sound new, like he’s just thought of it. A spontaneous feeling is what’s missing from Mulaney, but it’s present in fits and starts. The problem with Mulaney isn’t the set-up. I think it has more to do with the problems of the network-cable divide. The compromises that Mulaney makes as a show on a network rather than cable are evident in Mulaney’s stand-up jokes; they seem reworded to fit network censorship standards. The defanged versions are less funny, and they make less sense.

It doesn’t need to be that way. Mulaney could take more risks. In fact, that may be its last hope, as it teeters on the verge of cancellation after only three episodes have aired; the order has already been shaved from 16 to 13. Some intellectual sitcoms, shows like The Mary Tyler Moore Show, Seinfeld, 30 Rock, and All in the Family, aired on network TV and became insanely popular while remaining smart. So the idea that audiences really just want dreck like Two and a Half Men is just false conventional wisdom. TV has always contrasted the high with the low, The Twilight Zone with Petticoat Junction. Maybe Mulaney is aiming too high, trying to reinvent and reinvigorate the multi-camera sitcom for a new decade. But better to aim high and wobble than aim for the gutter and hit.

'The Knick' Finishes Its Brutal, Triumphant First Season As the Scariest Show on TV