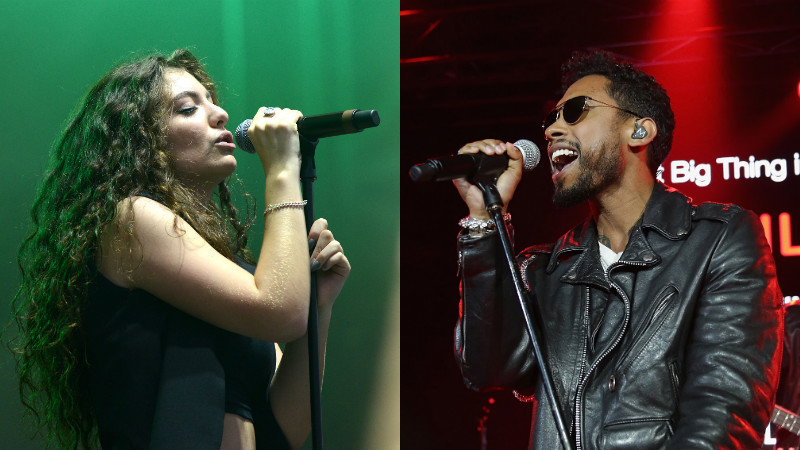 The tracklist from the Lorde-curated soundtrack for the third installment of the Hunger Games movies, Mockingjay — Part 1, has just been released. While the first Hunger Games soundtrack produced Taylor Swift’s minimalist bluegrass collaboration with the Civil Wars, “Safe & Sound,” the second soundtrack (for Catching Fire) featured a bombastic Christina Aguilera ballad called “We Remain,” Coldplay’s “Atlas,” and a Lorde cover of Tears for Fears’s “Everybody Wants to Rule the World.” Prior to yesterday, the only song to be released from the Lorde-selected tracklist for Mockingjay — Part 1 was Lorde’s new single, “Yellow Flicker Beat.” Grace Jones, Charli XCX, and Simon Le Bon also make appearances on the soundtrack.

But the first official song to be released after “Yellow Flicker Beat” is “This Is Not a Game,” a collaboration between the Chemical Brothers, Miguel, and … Lorde. If Lorde is going to be on every song on this soundtrack whispering, “Marmite on the beat, ho,” that would be pretty great. She pretty much just provides the drop on “This Is Not a Game,” intoning “There it is” in her witchy voice at the beginning of the track, before Miguel comes in on top of the Chemical Brothers’ beat clearly influenced by Cybotron’s 1983 bubbly electro-funk classic “Clear.” This genuinely odd collaboration portends well for the Mockingjay — Part 1 soundtrack to be a throwback to the “Hey, what if we put these two acts together?” soundtracks of the ’90s. Here are some of the songs “This Is Not a Game” reminds us of most.

This is from the Judgment Night soundtrack, which features many unlikely duets beloved by fans of ’90s hip-hop and alternative rock. You’ve got Dinosaur Jr. x Del tha Funkee Homosapien, Teenage Fanclub x De La Soul, and Mudhoney x Sir Mix-A-Lot, just to name a few. I love every song on this soundtrack, but this collaboration between Pearl Jam and Cypress Hill is what comes to mind first. Hearing B-Real flow over waves of shredded fuzz all starts to make perfect sense. This is the ’90s, man.

“(Can’t You) Trip Like I Do,” the Crystal Method ft. Filter

Spawn: The Album brought together ’90s hard rock/proto-nu-metal with a slate of DJs and trip-hop acts. Marilyn Manson x Sneaker Pimps, Metallica x DJ Spooky, Korn x the Dust Brothers, Butthole Surfers x Moby. It went gold. I remember this video SO WELL from having watched it endlessly on The Box. I also remember the way this song shifts halfway from a slow melt into a high BPM freakout while a wired-up and kohl-eyed Richard Patrick thrashes in an observation chair, set to footage of John Leguizamo as the Spawn villain/evil clown Violator. This is exactly what I expected the future to look and sound like, and I’m still disappointed that it doesn’t.

Damn son, where’d you find this? Joe Dante’s Small Soldiers is a deeply weird, creepy, interesting movie on the level of Toys. It was marketed as a kids’ movie but was way too dark to succeed as one. I remember getting a free cassette sampler of the soundtrack from Tower Records and hearing Z-Trip’s remix of “Tom Sawyer” for the first time — my first experience with Rush. It gets no weirder than a guest verse from Kool Keith on a remixed version of the Pretenders’ “My City Was Gone,” Keith lacing the classic with lyrics like “with Chrissie Hynde blow a swift verse through your mind.” It’s like they made this just for me.