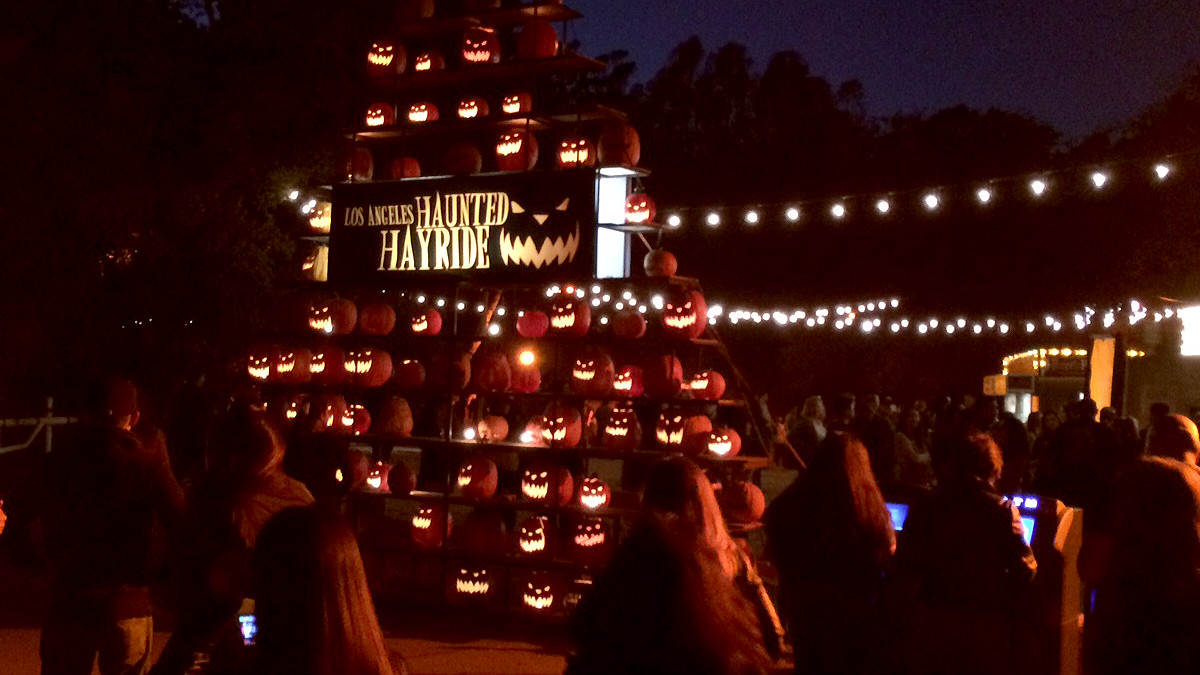 In the month leading up to October 31, Grantland editor Emily Yoshida, a person who knows no fear, will visit as many Halloween attractions in the Los Angeles area as will fit into her schedule. This week: the beloved (and well-funded) Los Angeles Haunted Hayride.

One of my favorite childhood memories is of a Halloween party held at my kindergarten when I was either 4 or 5. The teachers turned one of the back rooms of the school into a haunted house, the magnitude and elaborateness of which has been completely warped in my mind by both the oddities of childhood memory and the degree to which I mythologized it for the next few years. I wrote several short stories about this haunted house; soon it had not only a ball pit, but a slime swamp and Star Wars–style trash compactor that, apparently, the other children and I were forced to find an escape from. I also switched schools after kindergarten, so I could embellish all I wanted and nobody would be able to fact-check me.

What I really remember enjoying — and I think this was real — was my genuine disorientation and sense of open-ended adventure while I crawled through whatever labyrinthine structure our teachers had built. I don’t remember being with any friends when I went through it. I had to figure out my way through, and get stronger and tougher in the process. I don’t remember being traumatized or really very scared, but I remember having a ton of fun.

This all may prove to be a better prologue to next week’s haunt, but that haunted house has been on my mind after my visit to Los Angeles Haunted Hayride, one of the most beloved of all L.A. Haunts, despite its relatively short track record (this is its sixth year). Haunted Hayride is a study in several distinct styles of scaring, and there were moments of real immersion and engagement that took me right back to that slime-filled trash compactor. Also — how’s this for a tease? — that wasn’t even on the hayride itself!

Pitch: From the website: “The Los Angeles Haunted Hayride has become an Iconic Hollywood tradition that remains unparalleled and unmatched. This year, the extended trail is back bringing an entirely new twenty-five minute experience to those who think they’ve ‘seen it all.’ Armies of demonic forces and dark presences litter the grounds and are frantic to strike at their favorite ‘hayriders.’ This year’s sets are truly spectacular as the creative team takes on new special effects challenges not yet done in the live haunted attraction realm that will make the most unique haunted attraction in LA a show stopping vision of Haunt, Creep, and Bone Chill.”

Everybody loves Haunted Hayride. I’ve never heard anyone in Los Angeles say a single bad thing about it. The biggest dispute I had over it was with my Grantland coworkers when I tried to call it a “hayrack ride” and got laughed out of the office for perhaps the most Iowa turn of phrase of all time. They were like, “WTF is a hayrack?” and I was like, “This is a hayrack.” A hayride is an transportative act, like a cruise or a flight. A hayrack is the mechanism by which you are able to enjoy a hayride. Also, a hayrack is used for lots of other things during the rest of the year that have nothing to do with dragging people through scary attractions — e.g., I dunno, FEEDING THE COUNTRY. Do not attempt to tell me I don’t know what I’m talking about when it comes to agricultural equipment, you coastal elites.

Let’s start with the hayride itself. The theme this year is “Echoes From the Rift,” but had I not known that I would have guessed it was just “Spooky Shit.” Thirty or so of us piled onto the hayrack after being corralled in a chain-link cage (“There used to be a Japanese internment camp on this side of Griffith Park,” I told my hauntbuddies, apropos of something. “Fun fact?”) The ride is about 25 minutes and takes you up around the trees-y area of Griffith, through a series of what are more or less very impressive tableaus. We were first greeted by some Pan’s Labyrinth baby-eating monsters with glowing hand-eyes, then some Voldemort-looking cloaked figures guiding us through a glowing green tunnel. Then there was a circus, I think? They wouldn’t let us take out our phones, so I couldn’t take notes or photos, and the sequencing seemed a little arbitrary.

Because of the no-phones policy, I feel a little hesitant to go into more detail about what you see on the hayride, because there’s at least one incredible, dare I say dazzling, shock that I’d certainly not want spoiled. I will say this, the Haunted Hayride is the most Cirque-y of all the haunted attractions I’ve been to so far — more often than not, it chooses to wow you with the physicality of its performers, not with gore and loud noises. There is definitely a kind of fear that comes from seeing something unnatural involving a human body; it’s sort of that line between beauty and terror, those few seconds when you are simply trying to process what is before your eyes.

Sorry to be so vague! Let’s get granular:

Personal Boundary ViolationWatch: 2 out of 5 unwanted hugs. No touching, still — and we were very forcefully reminded not to touch the monsters, which seemed to be the bigger concern for them. But those hayride ghouls get awfully close if you’re in an outside seat. Breathing-down-your-neck close. If you’re into that kind of thing.

How many things are there to do, besides the hayride? There are two regular-ish mazes (“Seven Sins Sideshow” and “The House of the Horsemen”) and one dark maze. There is a carousel equipped with horse skeletons. There’s something called the Theatre of the Macabre that I didn’t bother with. There’s a photo-op tent that I did bother with, hard. There are fortune-tellers. There is a row of Porta-Potties and a handful of park restrooms with plumbing.

What was the demo? It seemed whiter than the other attractions I’d been to so far, but I wasn’t doing any official enumeration. There were a fair amount of kids, which seemed ill-advised — maybe the hayride itself is fine, but there’s definitely some more “adult humor” in the mazes, including a nun getting spanked behind a confessional screen in the Seven Sins Sideshow. The 5-year-old in our group had his mom’s hands over his eyes and ears before he even knew what hit him.

What did you eat there? The thing about all of these haunts is that without fail I’ve rolled up on them absolutely starving, which means I’ve been eating a lot of horrific food objects, both literally and nutritionally — the Queen Mary offered such delights as “bloody pig entrails” on a bun and the efficiently named “spooky tacos.” All goth, no health.

Anyway, there’s one food stand at the Los Angeles Haunted Hayride, and it is 100 percent vegan. There was no line when I went to get my spicy field roast “Saw-sage,” and when I verified with the server that everything on the menu (including the “high-tension taquitos”) was plant-based, I let out a little involuntary “Yay!” that was probably the first reaction of that nature she’d gotten that day. The Saw-sage was fine. It was eight dollars and not remotely healthy, but it was fine.

This made me curious about the Hayride Powers That Be. I want to know about this shadowy organization that traffics in bloody flesh-suits and cruelty-free food products. Were they with PETA? Were we going to get blood thrown on us if we were wearing any leather or fur? (Thank god I left the fur at home.)

I was in luck, because all my questions were about to be answered the way all of life’s most important questions are answered: On Shark Tank!

If you are reading this at work and don’t feel like you can get away with watching Shark Tank on the clock, to borrow a Jacoby-ism: weird, and here’s the short of it: Mark Cuban gave TenThirtyOne Productions’ Melissa Carbone $2 million, the show’s biggest ever investment. That was earlier this year, so 2014 marked the first Cuban-fueled Haunted Hayride. Carbone seems like a real boss, a horror-obsessed lady entrepreneur who put in some time working for The Devil Clear Channel and now is some kind of marketing savant. She’s also vegan, I guess?

Did you sustain any injuries? The House of the Horsemen is a seriously impressive maze, basically staged as an insane asylum for the personified four horsemen of the apocalypse, with enough interaction and narrative to keep you on your guard the entire time. Or maybe I just liked it because they singled me out to be the person whose screams open up the gates of hell. They also tricked me into getting electroshocked; I must not have been showing enough respect or something, because they really had it out for me. I left the tent with the hairs on my neck still tingling and a stamp deeming me “INSANE” on my hand. Didn’t I say something earlier about the Rave/Haunted Attraction Venn Diagram?

I’m saving the best for last, though: “In Between,” the dark maze, was worth the price of admission alone, and I feel a little weird saying that because it was essentially just a black-painted plywood structure that was completely unlit except for a few strobes. It was probably the cheapest thing to build and run in the entire encampment, and the most fun thing I’ve done by a mile on any of these haunted excursions. It’s a real maze — you are given no guidance, and though you enter with a group, you quickly lose people down different paths, only to later hear them screaming a few walls over. The maze is populated with some scary clowns and goblins, who you only see flashes of in the strobe. There are moments when you are shouting your friends’ names with real urgency, because you’ve been separated momentarily and have no idea where they or you are.

Like I said, I went right back to my fabulous Haunted House of the Imagination from kindergarten. Maybe I wasn’t quite scared, but I was having a really great time, no courtesy screams required, and no suspension of disbelief, because for once what the attraction was trying to convince me of — that I was lost — was actually true. It was a puzzle, a real activity that required my physical and emotional investment. It probably took about five to 10 minutes to make it through, but it felt longer, and when I finally exited to safety, I promptly wiped out on the drought-parched dirt path. I was laughing so hard, though, I hardly noticed.

NEXT WEEK: All by myself, again, forever.