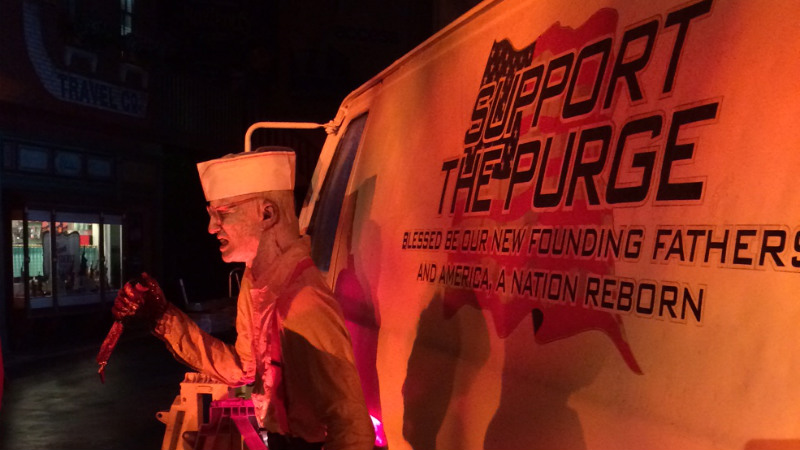 In the month leading up to October 31, Grantland editor Emily Yoshida, a person who knows no fear, will visit as many Halloween attractions in the Los Angeles area as will fit into her schedule. The Scare-a-Thon kicks off with Universal Studios’ venerable zombie takeover Halloween Horror Nights.

I am bad at being scared.

I don’t mean that I don’t handle fear well, or that I avoid things that have the potential to scare me. I mean that it is really, really hard for me to get scared. Before you accuse me of bragging, I want to make it clear that I see this as a deficiency on my part. I don’t really enjoy horror movies; most fall completely flat with me. I have little patience for scary tropes and suspenseful scenarios; most entertainment of that nature feels like a joke I already know the punch line to. Not being able to get scared by horror is like not being able to laugh, and everybody likes to laugh. I feel as though I am missing out on a vital patch of the tapestry of life.

This does not mean I don’t get scared by plenty of real-life threats. Here is an incomplete list of things in the world that have or do mortally frighten me:

So when I decided to embark on a marathon run of the myriad Halloween-themed attractions that spring up all over the greater Los Angeles area every fall, it was both skeptically and optimistically. I wanted to be scared, but had my doubts about how possible that was. At the very least, though, I figured it would be a good way to spend some fun, quality time with my friends. I sent out an email notifying my immediate social circle of my plans and heard back from everyone with relative expedience.

“Oh my god, dude — I love you, but no way. I dread this time of year. Halloween attractions are truly my personal hell.”

“I will not go to any of these with you.”

Why were all my rational adult friends so terrified of a bunch of fog machines and masks? Was this stuff really that scary? I remained in total ignorance, having never been in a Halloween attraction since the haunted hayride I went on in high school (which was on an actual working hayrack, in a cornfield). Maybe I was underestimating more recent advances in scare tech. Maybe I shouldn’t go around bragging about how nothing in the whole world frightens me before I’ve tasted the latest and greatest in orchestrated fear.

Pitch: From the official website: “After 80 years of blood-curdling horror film production, Universal Studios brings you the most terrifying 360 degree Halloween event in Los Angeles with More Dead Than Ever! This year, experience an all-new nightmare featuring scares from some of Hollywood’s most terrifying movies, TV shows and music at Universal Studios Halloween Horror Nights® 2014.”

Halloween Horror Nights (or HHN as cool in-the-know people like me call it) is a full horror takeover of the Universal Studios theme park. It’s a separate ticket from regular admission, and the park reopens at 6:30, freshly made over into a realm of ghouls. The draw at Universal is ostensibly the entertainment property–themed attractions; The Walking Dead has been represented there in one form or another for the past three years, which has been working out pretty nicely for them.

I arrived at Universal Studios tired, belligerent from having been sent in circles (and actually directed out of the park altogether at one point) by the lackadaisical parking crew. I made a lot of jokes about the REAL horror being the parking structure, which I forgot to write down, but you probably get the gist of. Thankfully, upon entering I found myself staring straight at Saddle Ranch. Two light domestic beers later, things were looking up.

I realized I was actually pretty nervous about kicking off my Scare-a-Thon, but it had nothing to do with the attraction itself and everything to do with my selective hatred of crowds, specifically crowds of #snapchatting #teens with #vapes. As we entered the TSA-like security line to get into the park, I actually passed some snapchatting teens, so this fear was not unfounded. The vaping would come later.

Thing I Was Most Looking Forward To: The Purge: Anarchy Scare Zone

Upon entry you are dumped into a region marked on the park map as a “Scare Zone” themed after the second Purge film. As a big fan of the franchise, I was perhaps disproportionately excited for what turned out to just be some people in Purger costumes and masks wandering the road and coming at you with machetes and chain saws every once in a while. This is where the rules of HHN became quickly apparent: The “scare-actors” could not touch you, and they couldn’t come at you from behind. Considering most of HHN’s entertainment revolves around scare-actors fucking with you, this got to be pretty predictable over the course of the night.

One Genuinely Cool, If Not Scary, Thing: The Walking Dead vs. Psycho crossover on the Terror Tram

The FAQ on the website recommended heading straight for the Terror Tram, which is the famed Universal Studio backlot tour, hacked by terror. This piece of advice led me to believe it would be mobbed, but we cruised through the line and boarded a half-empty tram. As it started rolling on its way, our guide warned us that there were a lot of Walkers out hunting for human flesh, and the Walking Dead theme started playing on the speakers, which is a genuinely thrilling and dramatic piece of music and was highly effective as the tram plunged into darkness. Not three minutes later our guide notified us that she had to stop the tram and we had to get out. “Stick together and move quickly!” was her cheerful advice.

I should note this all happened on some unlit service road behind the main park area, which made it way more convincing as a genuine technical difficulty, logic aside. Nobody wants to be stranded on the valley side of the Hollywood Hills, with or without the threat of Walkers. So, keeping the HHN scare-actor rule in mind, my buddy and I charged ahead. I mostly just found myself laughing uproariously while subtly positioning myself so the people in front of me would get the brunt of the zombie aggression, and gamely yelling “Ahhh! Oh no!” every time a zombie came within three feet of my neck.

Was I scared? At this point, I paused for some self-analysis. No, I was just having a natural human response to the threat of physical contact. Being aware of the rules regarding physical contact made it easier to avoid.

Anyway, eventually we found ourselves on the Psycho Bates Motel set, which was actually pretty fun, because we were way closer to it than you get on the regular studio tour. The route literally took us through the Bates Motel parking lot! There were some corpses on the porch and Walkers loitering around the rooms, which was a pretty geeky-cool sight, and definitely something that could only be at Universal. Too bad Mrs. Bates couldn’t make an appearance as the Queen of the Walkers.

As we made our way out of the zombie zone back to the park, a delightful haze of vanilla spice wafted past our faces from the #vaping #teens in front of us. “I’m not gonna lie, that vape smells amazing,” my friend whispered. The Halloween Spirit: Had we caught it?

Biggest Racket: Alien vs. Predator (and, perhaps, the rest of the mazes)

It was time for the pièce de résistance, the reason people shell out for HHN in the first place: waiting 100 minutes in line for a five-minute walkthrough “maze”! This year there were three headlining mazes: The Walking Dead (yes, again), From Dusk Till Dawn, and Alien vs. Predator. Wanting to mix in a little ultraviolent sci-fi creature horror with our zombies and ghouls, my buddy and I opted for AVP, but this turned out to be everyone else’s thinking as well. So we waited for approximately the runtime of the movie Alien vs. Predator, buying multiple $3 bottles of water to combat our Pink’s hot dog–induced dehydration, while a park employee did horror movie trivia from a platform in the center of the enormous, snaking corral of a line. There were prizes for correct answers, or rather, as the announcer put it: “Free crap! Free crap! Who wants some free crap!?” For some reason, his lack of commitment to his job put me in a darker place than anything I had seen thus far. In between trivia rounds some scantily clad goth-ish go-go dancers gyrated to dubstep for no discernible reason.

Eventually we were led into what was essentially a black Tyvek box, to be led about through a series of gory tableaux and more scare-actors jumping out at us (still no contact, of course). The problem with the mazes is that everyone is sent through in one consistent line, so you see what’s going to happen to you about five feet ahead. You can even avoid most of the shocks if you time it right.

I think that was my main disappointment with Halloween Horror Nights: While there’s plenty of work put into the costumes and the production value (there was an especially memorable moment in AVP involving one unfortunate woman and her intestines), very little is done to suspend your disbelief or disorient you. During the course of the line for the maze we walked entirely around the tent for another maze, which was like watching a cow slowly bleed out before sitting down for a steak dinner. A degree of removal is necessary for this kind of thing. No matter how much fog was blown into my face, I was never able to forget that I was in various temporary structures on a hill in the San Fernando Valley. Like I said, this fear thing is a deficiency.

Moment I actually screamed and ran to the restroom for safety: “Skullz”

One thing I relearned about myself that night: Stilts! Don’t like ’em! Have no tolerance for them! We had to cross through the “Skullz” scare zone several times throughout the night, which the website describes thus:

Lurking in Studio Center are the Skullz — giant wraith-like creatures with animal skulls for heads. According to Native American legend, the Wendigo, a malevolent supernatural half-beast creature with an insatiable appetite for human flesh … drives them to constantly be on the hunt for new victims. Will you be their next meal?

This was not working out for me. And, perhaps sensing my unease, these fuckers started cornering me on the way to the bathroom, looming a good four feet above me. My usual dodging tactics were not working, and soon I had to “nope” the hell out of there, quite literally repeating “Nope, nope, nope, NOPE NOPE NOPE” and then finally shrieking and running into the women’s restroom. This was encouraging. This was progress.