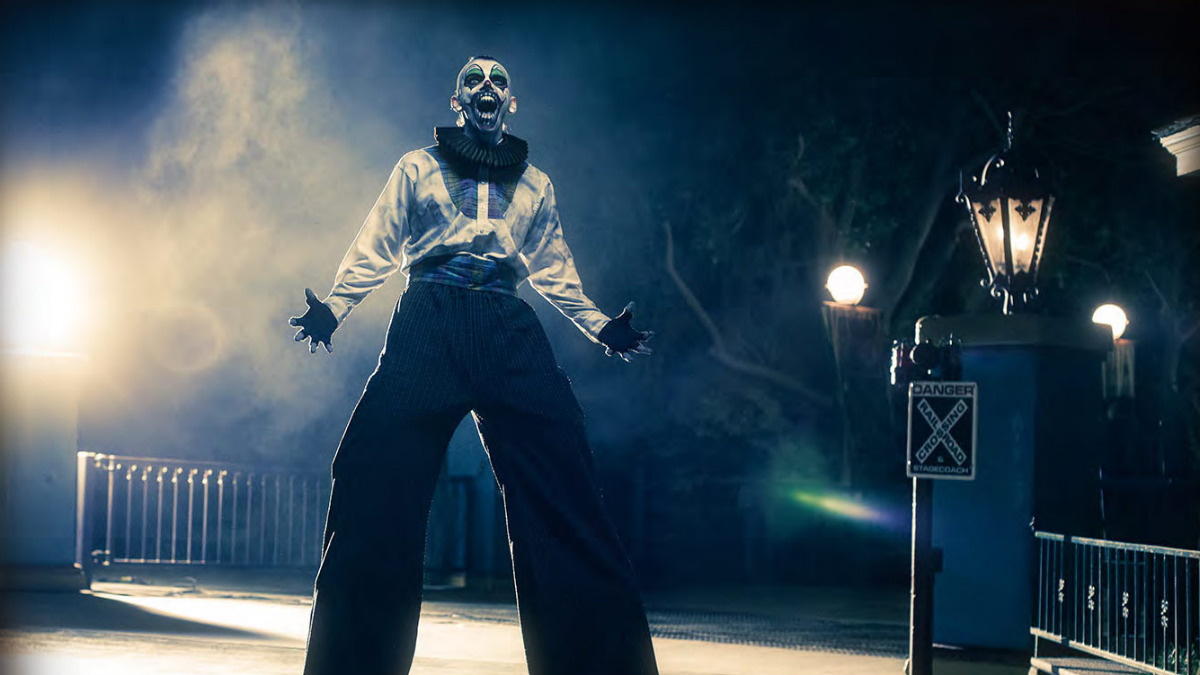 In the month leading up to October 31, Grantland editor Emily Yoshida, a person who knows no fear, will visit as many Halloween attractions in the Los Angeles area as will fit into her schedule. This week: taking on the original — and possibly the best? — of the O.G. L.A. Haunts: Knott’s Scary Farm.

I want to take a moment to show some appreciation for the scarers of the world, our brave men and women in latex masks and knee pads seasonally employed at countless spookyparks across the Southland. I’ve been to only two Haunts so far on this whirlwind tour, and already I feel confident enough to begin forming the broad strokes of a unified field theory about the Horror Nights and Scary Farms of the world. There are recurring elements in each event, and variants in each largely determine the quality of the experience.

Mazes: These are what the event touts as its proudest creations. They are usually in a temporary structure of some kind. They are basically “haunted houses,” though their themes are more diverse. They are not actual mazes.

Scare Zones: These are areas of the park where people wearing costumes and/or masks will try to “get” you.

EDM Area: Because there is a lot of crossover in the Rave/Theme Park Halloween Event Venn Diagram.

There are other little “color elements” — fortune-tellers, spooky snax, etc., but really, this is the golden pyramid from whence all terror springs. And, this far into my journey at least, I would argue that the Scare Zones, and the work of their denizens, is at the foundation of this pyramid. (The pyramid is composed of three levels, not three points/sides. It is two-dimensional. It’s like a food pyramid. Don’t worry, this is all very well thought out.)

Cost of Admission: $44 on a Thursday night, plus $20 for parking

Bells and Whistles: Having learned my lesson from my wait-plagued Horror Nights experience, I went all out and bundled my admission with a “Fright Lane” wristband (which got me to the front of the line for all the mazes) and a “Skeleton Key” (which promised to “unlock unnerving terrors in five select mazes”). My grand total for admission was … NINETY-NINE DOLLARS!!!!!!! [Swoon.]

The key was made of real metal though, so that was cool. 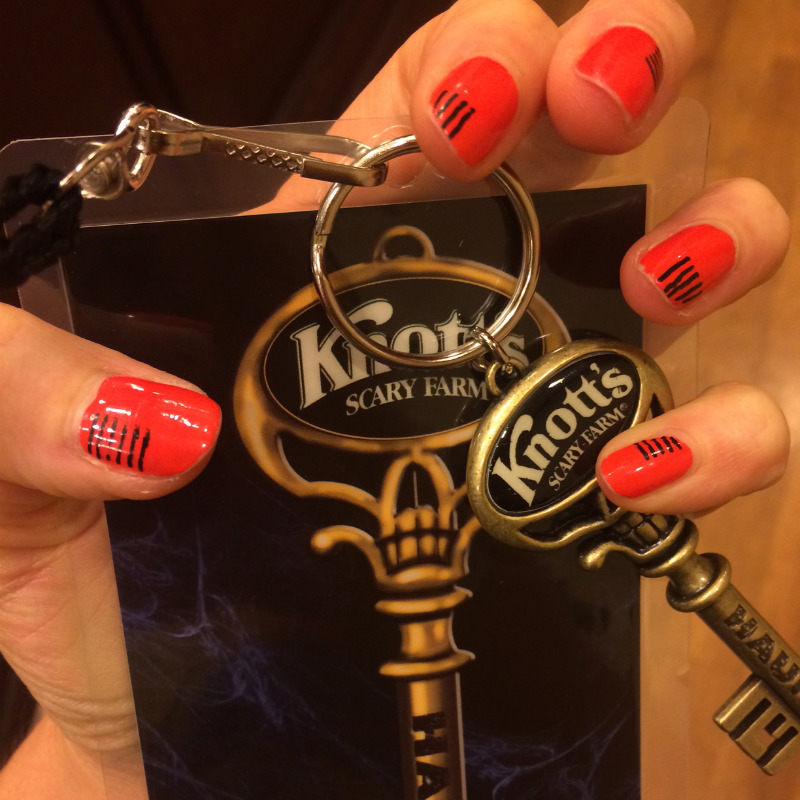 Pitch: “Knott’s Scary Farm is back with 11 haunted attractions and 1,000 monsters lurking in the fog. It’s all there at Knott’s Scary Farm! Survive the Zombie Apocalypse in an all out war in Special Ops: Infected or choose your path through the Cursed Bayou Swamps of Voodoo.”

Knott’s Scary Farm is largely credited with being the first theme park Halloween makeover of its kind, the model on which all other Scary Farms, Homesteads, and Biodomes have been based. It started back in 1973, when, according to Wikipedia, “Bud Hurlbut, who built and operated (as a concessionaire) the Mine Ride, Log Ride and other rides, decided that having static props wasn’t enough, so he put on a gorilla suit and scared guests as they rode on the Mine Ride.” It was a massive success, which is just adorable. Soon it became a yearly tradition for park employees to dress in costume and scare attendees during the Halloween season, and over the years they beefed it up, both in terms of art department and overall immersiveness.

Being the original and, many would say, the best of all L.A. Haunts, would seem like a daunting title to live up to. This is not the case though, because Knott’s Scary Farm KNOWS WHAT THE FUCK IT’S DOING.

Moment I considered bailing: I underestimated Knott’s; Universal had set my expectations so low that I went in with my guard completely down. But upon passing through the turnstile into the entry area, there was a completely different energy in the air. People were screaming. Frequently. There were a LOT of demon hillbillies lurking around, probably a 1-to-8 hillbilly-to-normie ratio. Worst of all, it was dark. In a way that seemed like it could be a liability. Hot Topic metal blared over the speakers, mingling with the growls and screams coming from up ahead. I was coming off a fairly pleasant, if a little traffic-y, sunset drive during which I listened to Taylor Swift’s second and third albums in their entirety, so I had to switch fairly quickly. But I want this endeavor to be based in honesty and truth, so I must admit there was a flash of a moment, like jumping into an unheated pool, when I was not sure I could see myself forging ahead.

So, if you recall from our last adventure, the “scare-actors” at Halloween Horror Nights were not allowed to touch you, and they could not sneak up on you from behind. I should have also mentioned that they could not speak — they could hiss or growl, but no verbal communication was involved. This is not the case at Knott’s.

My shoulders are still sore from my night at the Scary Farm, because most of it involved walking around in tense paranoia, looking back every few seconds, trying to keep a low profile so that I didn’t attract any stalkers. Just like real life, amirite ladies LOL?? I lost track of all the encounters I had with the park employees. The most intense was when I was descended upon on either side by two scary clowns in the midway section, both of whom growled in my ear about how they were going to cut me up into little pieces and eat my guts up. “OK!” I kept shouting back as I walked forward as quickly as I could. “OK! SOUNDS GREAT!” Each round of stalking was always punctuated by a quick shock or loud noise or a claw swipe at my ear, so I was really just bracing myself for that each time one of the scarers latched onto me. It’s an intense, continual, interactive experience, and once you’re used to it, it’s actually pretty fun, like LARPing or going to a warehouse party.

Personal Boundary ViolationWatch: 2 out of 5 unwanted hugs (they still can’t touch you, but they can sneak up on you, blow on your neck, and forge relatively long-term antagonistic relationships with you)

What did it smell like? Davidoff Cool Water and funnel cakes. Delicious.

Were the bells and whistles worth it? So, more honesty: About 30 minutes in, I lost my Skeleton Key on the Ghostrider roller coaster. PRO TIP: Do not try to take your belongings with you on a wooden roller coaster! Those things are like Vitamixes for personal articles. Everything gets emulsified. To get it replaced, I would have to wait in a long line that was right in the middle of a very populated section of demon hillbilly country, so I balked and went Key-free for a couple of mazes. I still had my Fright Lane pass, which meant I spent little to no time waiting, which made me feel important and professional.

I only really noticed one time when it seemed like I was in a “special area” in a maze, and that was on Voodoo, which was probably the best of the six or so mazes I went through. We Key-holders were led into a chamber where some kind of priestess put a spell on us that would make the undead of the cursed swamp think we were already dead. To activate this spell, we all had to get into individual standing coffins while she did some kind of incantation. Then the lights went out and some air jets blew at us from a vent, after which the coffins opened up and we rejoined the plebes for the rest of our tour through the swamp. Pretty fun, I guess? I’m not sure about $99 fun, but fun. Definitely get that Fright Lane pass, though, no question.

What was the demo at the park? I had never been to Knott’s Non-Scary Berry Farm before, or Buena Park, and I guess I didn’t realize that it is technically in Orange County? So in addition to the hordes of #teens there were also quite a few middle-aged, aggressively tanned Bravo show candidates, almost always couples with gaudy cross necklaces and no kids and VIP passes (some upper echelon of admission that I didn’t even bother looking into). They didn’t cause too much trouble, but they frequently held up the procession through the mazes, as apparently the flight instincts of an O.C. housewife are not very well honed when it comes to fleeing terror.

So be real, did you get scared, you jerk? Wait, first I want to tell you about the demon bear.

So, there I was wandering through a very sparsely populated path near the Ghost Town section, feeling pretty safe for the moment despite being in near total darkness, because why would any scarers be hanging out where there’s no prey? Of course, it was right then that I got the sense that someone was behind me, and I looked over my shoulder to see a giant bear in overalls, his face all mauled and mangled and zombified. He wasn’t really following me, he was just standing stock-still, staring at me. After a couple seconds, he shuffled forward. “I SEE YOU!” I yelled at him theateningly, like a cool adult. Suddenly — almost as if there were cameras or something monitoring the whereabouts of guests! — the entire path flooded with fog-machine fog. This wasn’t just one machine casting a ghostly haze over the walkway, this was a pea-soup fog, thick enough to where I couldn’t see my hand if I held my arm out in front of me. And then I realized the bear was right over my shoulder. I thought if I walked quickly enough I could lose him in the fog, but I couldn’t walk very fast because I was pretty sure there was a popcorn stand nearby that I didn’t want to run into. So I just inched forward, my new bear-buddy right behind me, for a good few minutes.

I hate awkward silences with strangers, so I tried to make conversation. “How’s it going?” I asked.

The bear grunted in return and shuffled forward.

The bear clacked his little metallic claws at me and shuffled forward. Eventually the fog cleared and my new friend wandered off to find another companion. But for a while there, we were able to put aside our differences and get through that foggy spell together, and that really meant something to me.

Uh, so yeah, did I get scared? Well, after the Black Magic maze, some girl who was there with her mom turned around as we went through the exit and pointed at me, saying, “I like her! She actually gets scared!” I could not tell you what it was I did during that maze that would bring her to that conclusion. I respect the work of these scary-park employees, and sometimes I have to shriek a little just to make sure they are aware of that.

NEXT WEEK: An actually haunted place, and my first release form!