Gods and Monsters: Why Godzilla Is Still King 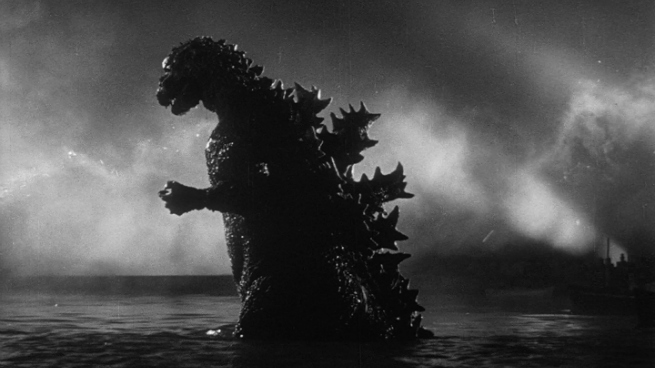 When the king of all monsters first emerged from the sea, nine years after the bombs fell on Hiroshima and Nagasaki, the tallest buildings in pre-industrial Tokyo just about flanked his shoulders. In the 28-film-strong Japanese franchise that followed, Godzilla’s dimensions yo-yoed, but by 1998 — the year of Roland Emmerich’s American Godzilla, which reimagined the god lizard as a souped-up T. rex — he’d at least doubled in size. Now, in Gareth Edwards’s moody, brilliant Godzilla, he is 350 feet tall, the largest incarnation of the monster.

By my cocktail-napkin calculations, Godzilla has grown an average of three feet a year, an upward trend roughly commensurate to his own celebrity. As his impact has grown, so has his body mass index — to keep audiences interested, perhaps, or simply to measure up to their expectations. Better to bulk up the rubber suit than disappoint. After all, the entrance is everything; after glimpses at his jumbo-size footprints, the unveiling of full-body Godzilla must be monumental, or it is nothing at all. 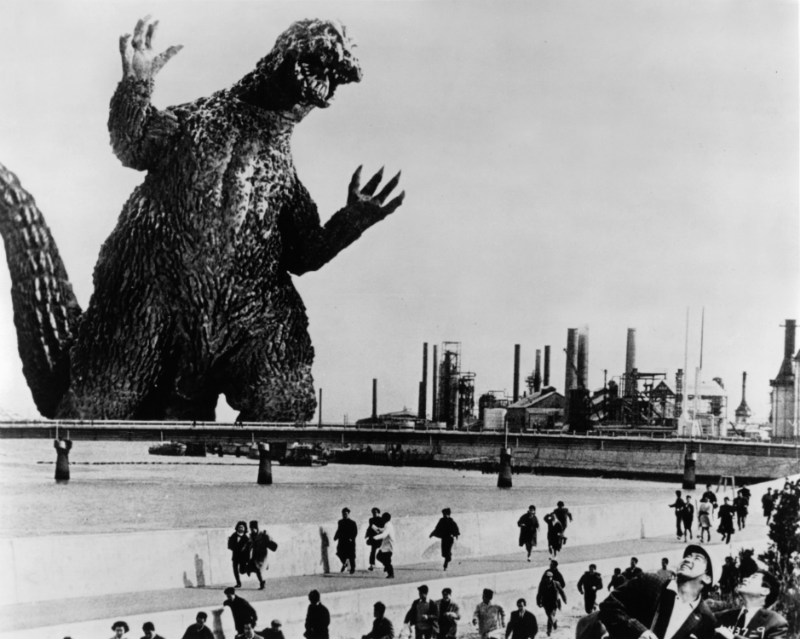 A note about monsters: They’re big. They have to be. And once new scales are established for movie monsters, the product of visual-effects brinkmanship or audience demand, it’s nearly impossible to backtrack. In a kind of terror fractal, the last biggest monster is always the baseline for the next. In this case, the most recent American interpretations of the kaiju tradition, Cloverfield (2008) and the operatic Pacific Rim (2013), stretched the playing field by an order of magnitude. The Cloverfield monster, Clover, is 25 stories tall and clambers through the ruins of Manhattan like a spooked horse. Pacific Rim’s monsters, which emerge from a transdimensional breach under the sea, are sublimely massive, almost impossible to comprehend. To conquer them requires the summoning of another cult film trope, itself inextricable from the Godzilla mythos: mecha-machines, giant robots controlled by human pilots, which in Pacific Rim are called Jaegers. The consensus in the fan forums seems to be that a Jaeger could easily defeat the original 1954 Godzilla, who rates as only a “Category 2” in the metrics of the Pacific Rim world. The scale goes up to Category 5.

Such bigness is integral to the heft of a monster’s menace. Aliens, on the other hand, are generally human-size, or at least somewhere in the neighborhood, ranging from tallish abductors — “grays,” with the physique of anorexic basketball players — to toddler-size little green men. Godzilla is a monster; the Predator is an alien. The Alien alien is an alien, obviously, despite its phallic monstrosity. Pacific Rim’s kaiju are monsters; their makers, glimpsed briefly in the film before their entire world is destroyed in a blooming shudder of blue light, are aliens. 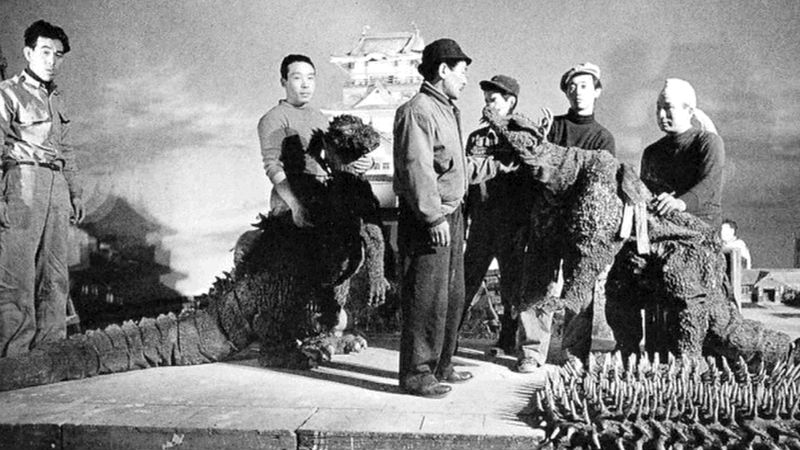 As symbolic totems, aliens and monsters articulate different fears. Aliens, ever inscrutable, lingering in the territory of the uncanny, motives unknown, familiar and unfamiliar at once, are speculative stand-ins for the Other. This kind of horror — of looking into a set of dead eyes, feeling the gummy touch of a cold extraterrestrial finger — is personal. Most aliens in the 1950s and early 1960s, during the so-called “Golden Age” of science fiction, were essentially just Soviets. Aliens have variably stood for the colonized, women, gays, transgender people, people of color, or unknown parts of ourselves. Fear of difference tends to be small-scale, faced alone in a pitch-black bedroom, or in the dark night of individual prejudice.

Monsters, however, are wholly impersonal. They’re the roaring manifestations of cumulative, collective cultural dread. In the original Japanese films, all produced by Toho Studios, Godzilla is an ancient darkness awakened by human error. Godzilla is a one-to-one embodiment of the horrors of the war, inseparable from anxieties about nuclear power, and in a broader sense the consequences of manipulating nature. In licensing Godzilla to Legendary Pictures, Toho set out one specific condition about the story arc: Godzilla must emerge after a nuclear incident in Japan. The nuclear trauma he represents has shifted now — Fukushima instead of Hiroshima — but the message remains the same: Some things are not meant to be tampered with.

Aliens are unfamiliar, arriving to Earth unbidden from the distant reaches of space. Monsters are the Ur-familiar, evoking something specifically primeval. They often come from the sea, where we keep our geological secrets and bury our lost continents; in a literary tradition that dates back to H.P. Lovecraft, they are unspeakably ancient. In horror, we don’t get our thrills by launching ourselves out of the solar system and into the arms of waiting little green men, but when incomprehensibly ancient monstrosities come bellowing out of the black maw of our own world. 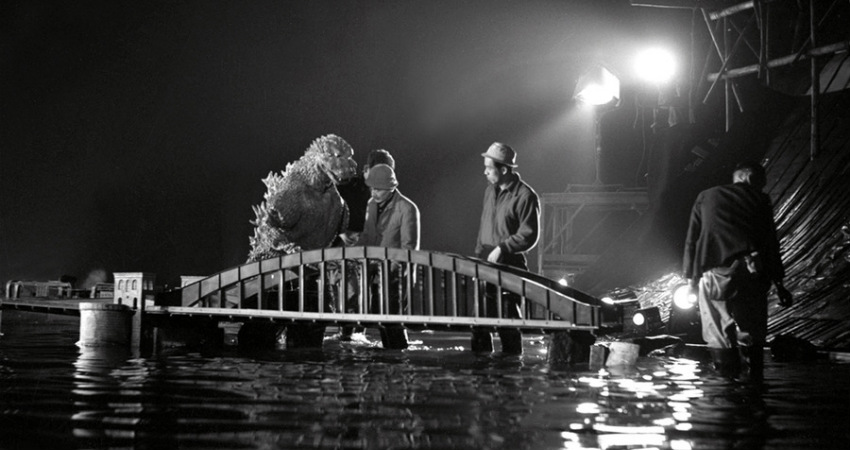 Monsters are the compounded hideousness of the planet, pressed like carbon. As Ken Watanabe’s character in Godzilla, Dr. Ishiro Serizawa, spends the film gravely intoning, Godzilla is nature biting back, restoring the natural order. He is as indifferent as a tornado, more of an event than a creature on the warpath. Although the name “Godzilla” is a romanization of “Gojira,” the Japanese portmanteau of “gorira” (gorilla) and “kujira” (whale), he is a god, ancient as a Titan and as potent a punisher as Cthulhu, arguably the original kaiju.

In Pacific Rim as in Godzilla, the world embraces the kaiju with equal measures of rhapsodic pleasure and terror; audiences of these films react in much the same way, hooting and hollering in the movie theater as the monsters roar their metallic thunder. Watching Godzilla, I screamed, but it was a scream of euphoria, almost of gratitude. The turn-of-the-century horror writer A. Merritt, who trafficked in his share of monstrosity, called this phenomenon the “unhuman mingling of opposites,” a combination of “ecstasy unsupportable and horror unimaginable.” Or Rainer Maria Rilke, more famously: “Beauty is nothing but the beginning of terror which we are still just able to endure.” 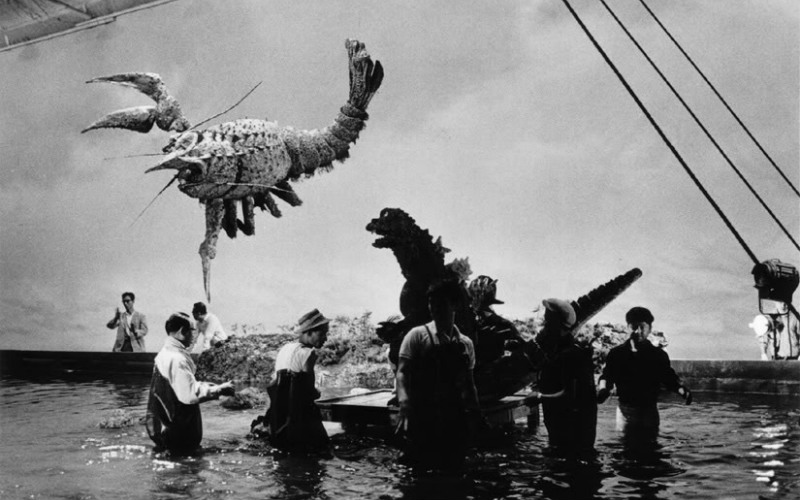 Godzilla’s size now verges on the metaphysical. It humbles, implying the existence of greater and more obscure realms of existence — great, cyclopean mysteries on a planet we’ve long considered conquered. In one of the most potent and visually arresting scenes of the new Godzilla, a group of Marines parachutes into San Francisco while Godzilla is in the throes of building-toppling battle with the MUTOs — Massive Unidentified Terrestrial Organisms, ’roided-out Mothras. As the Marines leap from the plane and into the burning, choking city, they’re majestic; by the time they’re tumbling down along the monsters’ flanks, they’re plastic Army men, no more significant than soda cans in a hurricane.

It twigs something, in the human brain, to see plays of scale this visceral. It’s a rare experience. After all, while the infinite universe is a reliable instrument of awe, it takes nearly meditative levels of intent — to say nothing of access to a clear night sky — to grasp its magnitude for even a moment. God, too, is invisible. Cathedrals used to do the job; now, for most of us, they’re postcards, images in history books. And although we live in bigger and bigger cities, our tactile worlds are dwindling to pinpoints on palm-size devices. Godzilla works, in this film as in every previous iteration, because he is undeniable. The craggy lizard foot of god forces a vital, essentially spiritual, perspective shift: We are not the masters of the world. We are finite, ineffectual, and eminently squashable.

The 'I Wanna Marry "Harry"’ Premiere: Who Wants to Look Like a Dummy Fighting Over Fake Royalty?