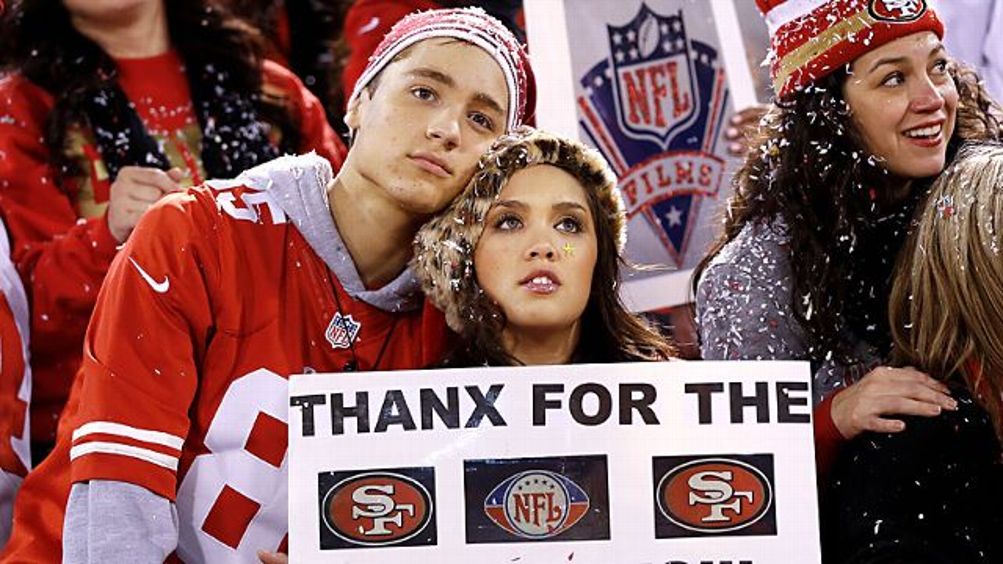 The foghorn blew at 5:09 p.m. on the unseasonably pleasant evening of December 23, 2013 signaling 30 minutes to kickoff. Barring some highly improbable late-season maneuvers from the ever-capricious Football Gods, it will have blown for the very last time. The Stick’s swan song is upon us, the game itself, a 49ers-Falcons tilt with the home team a heavy favorite, a mere side note. It is a sad milestone. For some. OK, for die-hard 49ers fans. As for the rest of the country? I expect a great sigh of relief will sweep through the land when the Stick is nothing but rubble and dust. Indeed, few public landmarks have ever been as widely mocked, reviled, and jeered as the decaying stadium that has perched on the western edge of the white-capped waters of San Francisco Bay since 1960.

Part of me understands the sentiment. In this age of state-of-the-art, billion-dollar football palaces that feature Wi-Fi, fantasy football lounges, IPTV (I don’t even know what that is), and giant HD video screens, Candlestick looks like it was built not in a different era, but by another species altogether. The grievances are as familiar as they are numerous: the sticky walkways. The once-bright orange seats faded to sickly pale salmon. The horrid parking. The poor access roads. The soul-crushing traffic. The bathrooms — oh, the bathrooms. And of course, the hat-ripping gusts of wind that have for decades bedeviled quarterbacks and made utter mockery of the science of field goal kicking.

Yet, surely, what happens inside the structure matters at least as much as the structure itself, no? Any venue, no matter how newfangled or antiquated, still constitutes the means to a greater end, that end hopefully being things like spectacle, high drama, and a chance to witness something sublime and transcendent; one of those rare I was so happy I was alive to see it moments that can only be understood teleologically, during which you experience euphoria in such pure form, of such stratospheric height, that you are struck with the absolute conviction that there truly isn’t a thing wrong with the world.

If that’s the case, then Candlestick trumps most other football stadiums in the country. 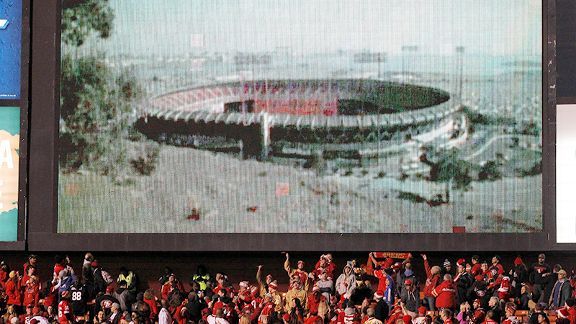 I think about that now, as my son and I watch Colin Kaepernick warm up on the field, listening to God knows what on his headphones, oblivious to the fanfare surrounding him, to all the old heroes at hand for the occasion, the crowd cheering when Young tosses a ball to Rice in the south end zone. Kap looks focused, effortlessly threading dart after dart to Davis, Boldin, Crabtree — it’s a little like watching Clapton finger blues scales before a show.

I’ve lived in this country for 33 years now. I was 15 when my family and I resettled in the U.S. to escape the Soviet war in Afghanistan, arriving, all nine of us, at SFO in September 1980. I didn’t know much at all about being an American, but I estimate that I was a football fan by the time we reached baggage claim. I fell fast and I fell hard for the 49ers — I learned to love them before I learned to speak English. The 49ers, and by extension the Stick, have been constant companions to me for as long as I have lived in the U.S., which has been most of my life. In a very real way, my Americanization began with them. I suspect only immigrants can truly understand what a gift something as simple as a football game can be amid the sheer bewilderment and disorientation of starting life anew in a foreign land. So tonight, nostalgia tugs. It tugs hard, as I knew it would, and I give in.

As with my “real” life, my football life has had its share of heartbreaks — though the border between the two is far more porous than I care to admit. And Candlestick has been home to many, if not most of them. As I stand for the national anthem, I find my mind flipping through a highlight reel of all the 49er tragedies that played out here over the years. Where to begin? How about the shocking playoff loss to the underdog Vikings in January 1988? Or Leonard Marshall’s violent hit on Montana in the 1990 NFC championship game, topped by Roger Craig’s epic fumble later in that same contest? Then there was the Alvin Harper skinny post 8 route that all but sank the 49ers in the 1992 NFC championship game against the Cowboys and the loss in the 1997 NFC championship mud bath to perennial bête noire Brett Favre. And I am still trying to forget the operatic, near-Shakespearean tragedy of the Kyle Williams fumbles that doomed the scarlet-and-gold that cold, rainy night in January 2012.

When they blow the dynamite next year and bring down Candlestick, a piece of me will also crumble and lie buried in the rubble.

I recall that in the immediate aftermath of those losses at Candlestick, I lost all healthy perspective, my ordinarily sober and sensible outlook cast to the wind like the hot dog wrappers forever swirling above the ballpark’s stands. I am not proud of this. Frankly, it is embarrassing (as a graying, 48-year-old father of two, and as someone from Afghanistan, an impoverished nation unraveled by three decades of violence and human suffering) to describe the depth of emotional sting inflicted on me by those Candlestick heartbreaks. Disappointment is too bland a word, too feeble to capture the helpless despair of watching the opponent kneel in victory, the long, long offseason looming suddenly and cruelly premature.

But to me, the beauty of football, the allure that forever pulls me into its vortex, is in the extremes of emotion. And, more than any other place, Candlestick has been home to moments of transcendent joy and elation so pure, so primal, so blasphemously close to religious experience, that I find them all but impossible to evoke now, let alone describe directly. And as I think about those moments (they come with names and Roman numerals: The Catch, The Catch II, The Catch III) I ask myself, what is it about those wins and losses on this field that have marked me so permanently? Is it as simple as my team won or my team lost? Maybe. Maybe scoreboard is all there is. But I suspect the real reason I love this game and this team and this old ballpark — the real reason I remember 1996 as much for being the year the 49ers drafted Terrell Owens as for being the year I passed my medical board exams — is the admittedly delusional sensation of proximity, of brotherhood and solidarity I have always felt between me and this group of strangers. This is all a long way of saying that, when they blow the dynamite next year and bring down Candlestick, a piece of me will also crumble and lie buried in the rubble. 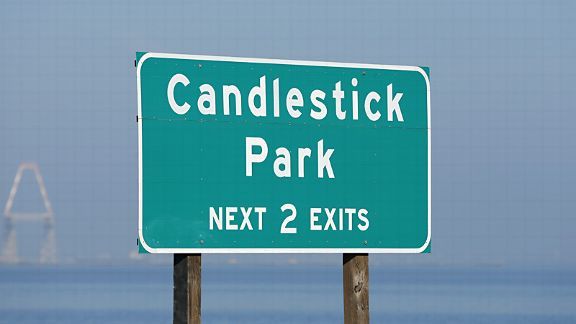 As for the game — remember the game? The one that the home team was expected to steamroll through? Well, it didn’t quite work out that way. With a minute left, the surprisingly game Falcons were perilously close to ruining the 49ers’ season, down only three and with the ball at San Francisco’s 11-yard line. If the 49ers lost, they would have had to travel to Arizona the next week for a virtual playoff match just to make the postseason. There wasn’t a soul sitting in the whole park. I can all but see the collective thought bubble floating above Candlestick: It wasn’t supposed to end this way.

Then, just as Matt Ryan throws to Harry Douglas, 49ers cornerback Tramaine Brock makes a perfect break and the ball bounces off the receiver’s fingers to land in the waiting hands of NaVorro Bowman. Bowman streaks down the sideline and Candlestick comes undone. The world becomes a whirligig of screaming, leaping, hugging fans, and as I am throttled and backslapped by perfect strangers who seem, at the moment, like old, trusted friends, all I can think is: Of course. Of course it was supposed to end this way. What were we thinking? This is Candlestick, after all. The Bowman pick is her final gift, her farewell to us.

In response, I say this to Candlestick tonight: Know that — to paraphrase Springsteen — you weren’t a beauty, but hey, you were all right. Know that, though I may never walk through your gates again, I will remember fondly your decrepit charm, your cold winds, and your musty fog. Know that, for the record, I never once called you 3Com Park, or Monster Park, or whatever other corporate naming indignity you had to suffer. And know that I will always be grateful to you, for all those moments, the sweet and the bitter alike. But mostly for being there for me, you and the 49ers, all those years ago when I first set foot in this country, when I was a perplexed 15-year-old who so desperately wanted to belong, to be included, to feel connected, to understand what it felt like to be American.

When I walk out through those gates tonight, I will not look back. I will not linger. No final look over the shoulder to see your shining lights for me. I think Lord Byron said it best:

Let’s not unman each other — part at once;  All farewells should be sudden, when forever, Else they make an eternity of moments,  And clog the last sad sands of life with tears.

Thank you, Candlestick. Or as we say in Afghanistan, Tashakor.

Khaled Hosseini is the author of the novels The Kite Runner, A Thousand Splendid Suns, and And the Mountains Echoed. He lives in San Jose, California.