Closing the Cave of the Winds 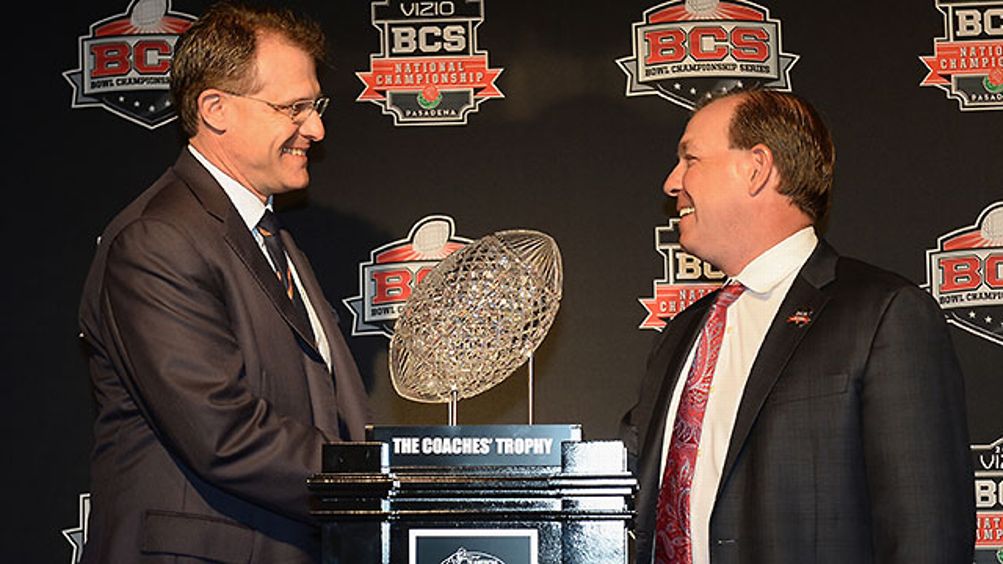 Every game starts 0-0. So says the coachspeak chestnut; so says adidas; so says, surely at some point, the coach of the team that won its first 13 games of the 2013 season by a combined score of 689-139.1 The coach of the team that frequently sliced rather than punched its way to the final BCS championship game, with one outright loss and five victories decided by a touchdown or less, would surely agree. It can be a comfort to focus on that 0-0 in nervy moments; to reason that, even though Florida State’s games start close but don’t tend to stay that way, while Auburn’s do, each workflow has produced a title contender. But the 0-0 is a tidy lie, isn’t it? Saying every game begins 0-0 is true on the scoreboard and maybe nowhere else; it’s an agreed-upon starting point.

It’s also entirely necessary. All the star ratings and coaches’ polls and power rankings on God’s green Internet are insufficient to quantify precisely how much better prepared a given team might be to compete in a given game. And even if such precise equations were possible, they would still discount, off the top of our heads: weather, freak injuries, sheer cussed luck, and the capricious machinations of an unseen host of temperamental gods. The absence of any kind of calculus to determine, for example, how Florida State’s presence in the first three BCS title games weighs in the cosmic balance against Auburn’s 2004 snub and surprise 2010 run behind Cam Newton is why talk radio and message boards exist in all their scurrilous glory, and why we have a job. It’s a science so imperfect it doesn’t even deserve the term. It’s more fun this way, don’t you think?

Even after marinating and occasionally half-drowning in the possibilities and realities this season offered, it’s a breathtaking exercise to look back and attempt to take in and appreciate just how much had to happen to the Seminoles and Tigers to get them here, and to all the teams they stared down across sideline after sideline to allow them passage. It’s the most exhilarating aspect of the sport — the staggeringly vast breadth and depth of the ecosystem at work. A butterfly in Towson flaps its wings in August and Urban Meyer loses to a grown man named Dabo in January. Even if we can trace the hows, we’ll never completely understand all the whys, and it’s like this every year.

A long, dark, dumb offseason looms. Before it reaches your doorstep, sip a little of the history this season has written before the great book closes, its cover somehow already dusty and bearing the faint impressions of a defiant “ROLL TIDE” carved into the endpaper with a spent ballpoint pen.

For this, we’ll need to select our own 0-0. That’s another thing about college football as pop anthropology: We can trace the tributaries back to forever2 before the season actually started, to players who signed or didn’t, qualified or didn’t, stayed or didn’t. We can follow how every team’s assorted calamities have affected every other’s, somehow, and never hit a wall in this nearly endless universe. Auburn’s on-field swings of outrageous fortune at the expense of Georgia and Alabama have been well documented, but consider, too, how Florida State has benefited from hard times at, say, Florida and Miami. What if Mack Brown had returned Jameis Winston’s calls? What if Mark Richt hadn’t dismissed Nick Marshall? What if any handful of a thousand quirks of player development had prevented either of these teams from attaining these earlier-than-expected summits?3 We could do this all day. We will do this all day, in some form, between Tuesday and August 28. But for now, here’s a brief reverie of selected ways in which the Tigers’ and Seminoles’ seasons could have gone all wrong. Our jumping-off point: the onset of the season itself.

• Saturday, August 31. Auburn, Alabama. Auburn vs. Washington State. A meeting between Mike Leach and Gus Malzahn at the end of some season, with their respective war machines fully stocked and operational, remains an unchecked college football wish list box. This season’s tilt came with all manner of misfires and spitty scoring, though all were explicable under the heading of “young regimes.” The final four scoreboard changes came on field goals, while Auburn also contributed a 75-yard Corey Grant run and a 100-yard Tre Mason kickoff return. Auburn won, 31-24. We remember wondering what Mason might be capable of against a more capable defense. How quaint.

• Monday, September 2. Pittsburgh, Pennsylvania. Florida State @ Pitt. It’s neither exaggeration nor insult to say that Auburn is the less likely participant in this national championship game. If anything, coming off a 3-9 season and playing under a new head coach, even one with such marked recent success as the program’s offensive coordinator, that’s a gross understatement. But there’s unlikely in the more likely half of this matchup, too. There’s no need to create false equivalencies: FSU’s blind curves in 2013 weren’t as entertaining as Auburn’s, but they were there, beginning with whether Winston would even earn the starting quarterback job. His collegiate debut was scheduled for Labor Day, with the Noles alone on the road in prime time. Legitimate questions surrounded Winston’s opening night: Could any kid his age, no matter how preternaturally talented, be ready for this? We found out in relatively short order:

• Saturday, September 14. Auburn, Alabama. Auburn vs. Mississippi State. Auburn’s November fourth-quarter phenomena justifiably overshadowed every other close call the Tigers and every other team suffered all season, but don’t forget that Auburn came perilously close to recording two division losses before it even got out of September. The Tigers managed to achieve a 3-0 start thanks to this Marshall-to–C.J. Uzomah touchdown pass with 10 seconds on the clock:

• Saturday, September 21. Baton Rouge, Louisiana. Auburn @ LSU. The Bayou Bengals were up on the Tigers of the Plains by three touchdowns from the start of the fourth quarter until halfway through that period, but whether this game even belongs on this list is up for discussion. It could have derailed Auburn from the title-game tracks, but not without some more help. In its place we should perhaps slot LSU’s tilt-a-whirl game against Georgia the following week and October field-goal loss to Ole Miss, which dropped LSU below Auburn in the SEC West standings thanks to six paltry points, and could have led to a three-way tie in the division.

The Noles also outscored the Eagles 24-17 in the second half, and a late Nate Andrews interception of Chase Rettig staved off further attempts at a home-team uprising.

• Saturday, October 19. College Station, Texas. Auburn @ A&M. Another last-minute victory for the Tigers, this one hinging on a fortuitously timed Dee Ford sack of Johnny Manziel on fourth down. This after the Tigers jumped ahead with just more than a minute to play on a Mason run, for the eighth and final lead change of the game.

• Saturday, October 19. Clemson, South Carolina. Florida State @ Clemson. Remember that time this was advertised as a football game between two top-five teams, and not a crowded tour of an abattoir?

• Saturday, November 16. Auburn, Alabama. Auburn vs. Georgia. You will have heard what happened here, which is about the time we started wondering whether Auburn’s particular sovereign deity was just that omnipotent or whether there was any order to be found at all in a cold and indifferent universe.

To go undefeated in a given college football season is to slay a dozen Hydras in the span of 90 days or so, a task almost no team is up to. But think how boring it’d be if more teams were — like watching fighting Rube Goldberg machines.4 This year, one team did just that. The other came perilously close, on a handful of occasions, to ending up playing a bowl game in Birmingham, but instead prevailed, and prevailed, and prevailed.

Now, with all that celestial baggage piled up top, this glitzy caravan careers into the exquisite setting of Pasadena, where the forecast at kickoff time will hover at 70 degrees Fahrenheit, the grass will be brand-new, and even the guy in the press box announcing the down and distance will sound positively senatorial. There, we’ll be treated to a new set of what-ifs, from these likeliest and unlikeliest of teams, and we’ll see how the best player in the country, on his birthday, carries weight with the fates against a program that, by all appearances, counts improbability among its booster set. Stay tuned.