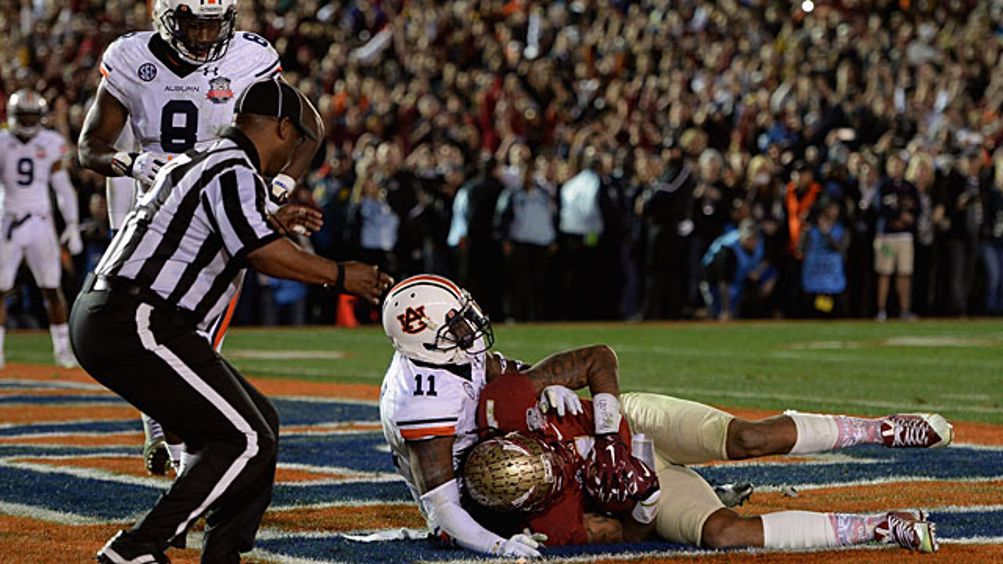 “C’mon, man, why’d you ask that?” said Davis. “It’s the national championship, what kind of emotions you expect?” When he’s old and gray, Davis will get to muse sleepily about bringing the field goal back against Alabama in the Iron Bowl, but at the moment, he was still young enough to exude disappointment you could feel in Pacoima; he could only see Florida State’s Kelvin Benjamin going up and making a play over him in the end zone Monday night — after Davis had been nipped with a pass-interference call on third-and-8 — to give the Seminoles the last BCS National Championship there ever will be, 34-31. And then somebody asked Davis, again, whether at the end of the game he felt that Auburn had another “miracle finish” in them, and he said, softly:

They were never going to lose easily because, for the past two months, Auburn had found more complicated, bizarre, and downright funky ways to win important football games than anything the Marx Brothers devised in Horse Feathers. Ricardo Louis catches a two-rail shot off a defensive back to beat Georgia. Davis runs a missed field goal all up in Nick Saban’s genius. This enfolded the team in the kind of gooey sentimentality that makes for good television but can get a little sticky when you’re playing for a national title. Individual skills get lost in a kind of magical thinking about destiny, an element of football that generally lasts about as long as it takes for someone to miss a block and get his quarterback knocked on his happenstance. Your team’s talent gets lost in the notion that the One Great Scorer is mixing up the X’s and O’s on your behalf. Destiny can be a distraction, and we know how much football coaches love those.

“I told them in the locker room, equally the biggest turnaround in the history of college football, and they’ve been playing football a long time,” said Auburn coach Gus Malzahn, whose own rise from both nowhere and Arkansas seems more than a triumph over mere redundancy. “We were just on the brink of making it one of those magical seasons, but there’s so many great things that we’ll take.”

But Auburn believed in something more solid. It believed that it had earned all the baroque good fortune that had come its way since shortly after Thanksgiving. The program was a year or so removed from not having won a single game in the SEC. The Tigers had the national championship with Cam Newton, and that all went sour in the aftermath, and pretty soon, all that people remembered about Auburn football was that some Alabama fan went nutty-bananas and poisoned a couple of trees. This is what Malzahn walked into when he arrived at Toomer’s Corner.

“There’s no doubt, we’re going up,” he said. “The experience that we had and we got most of our guys coming back, and our goal is to get back here.”

By the end, Davis was convinced that he could have taken the game’s final kickoff back, not because Somebody Up There Liked Him, but because he saw a couple of blocks, and there was a seam, if he only could have gotten there.

“I saw a lane,” he said. “I thought I could make one more play there, but it closed up pretty quick.”

And, anyway, over the game’s last five hysterical minutes, the whole destiny thing became malleable. You could shape it in your mind to whatever purpose flossy sentiment demanded. Trailing 24-20, Florida State had a freshman, Levonte “Kermit” Whitfield, bring a kickoff 100 yards to take the lead, and there was destiny, getting its own back for Louis against Georgia and Davis against the Tide. On the ensuing drive, however, Auburn went 75 yards in eight plays, with Tre Mason picking up the last 37 of them — passing Bo Jackson as the school’s single-season rushing leader along the way — giving Auburn the lead, and proving that destiny had not thrown them over yet. And then there was Davis, lying in the end zone, with Benjamin beside him, holding the ball, and destiny seemed very far away. It was just football, then, and the romance was gone somewhere deep in the darkened California hills. 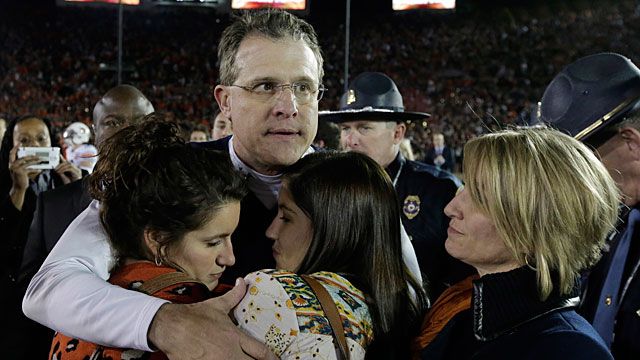 It is helpful, then, to note that Auburn came within an ace of winning the national championship for some very prosaic reasons. For most of the game, Auburn’s defensive unit played smart, and hit hard, and gave Florida State quarterback Jameis Winston the devil’s own time reading what was coming. “He started holding the ball,” said Auburn defensive end Dee Ford. “He started second-guessing his decisions, and that’s exactly what I knew — at the end of the day, he’s a freshman, and I think tonight we kind of exposed that, and we just wasn’t able to finish in that last drive. Very early, I saw he was a little hesitant.”

The other reason was Mason, a tough, smart runner who was Auburn’s bailout player all night. (And, it should be noted, the Downtown Athletic Club’s fancy andiron be damned, the best offensive player on the field.) He put up 195 rushing yards, and he earned every one of them. There were not many holes through which he could run, and the ones that were there were not very big and did not last very long. Mason got dinged and popped on the way by on almost every one of his 34 carries. On his touchdown run, the one that gave Auburn its last lead, he bounced off a couple of defenders at the line, stepped through a crease, threw a double move on a Florida State player, and then ran over him anyway. There was Auburn, Finding A Way again. Fate’s prom date.

“Emotions are everywhere right now,” said Mason, who is going to have to make a call on the NFL very soon. “That’s not really what’s going through my head right now. Right now, I just feel like I let the whole Auburn family down by not finishing. That decision will probably come later on, but right now, I’m not thinking of that.

“It’s a blessing to surpass [Bo Jackson’s] yards that he put up, but it would be great to do that with holding the crystal ball in the air. But that’s just the way it is.”

“He’s being too hard on himself,” said Ford, “but he’s a competitor. I don’t expect him to be any other way. But that’s why we’re a team. That’s why we’re brothers. I’m able to really talk to him. And the Auburn family is going to do the same thing. But, yeah, he’s down on himself. That’s expected. We’re competitors. I’m down on myself. But we can’t really show the emotion and we wanted this thing so bad and it was so close.”

Ford’s voice trailed off, as Mason’s had, and as Davis’s voice had trailed off in the locker room earlier. Ultimately, now that every cookie has crumbled the way the cookie crumbles, and every ball has bounced the way the ball bounces, the memories belong to those on the team. The world that had fashioned what it wanted to fashion out of the extraordinary last few months of Auburn football will move on and become fascinated with something else, and make out of it what that world will, someone else’s destiny always being a malleable thing for the gaping public. But they will grow old in their memories, and Chris Davis one day will come back to a banquet at Auburn, and they will show what he did against Alabama, and it will still be the goddamndest thing anyone ever saw. And that, even Monday night, should be enough for anyone.