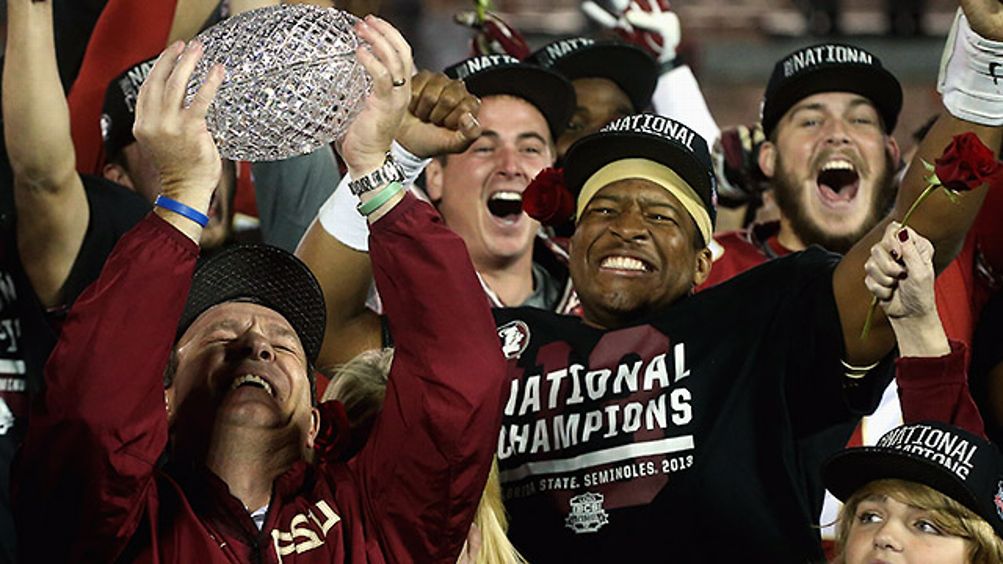 There’s some other folks in this country who can play some football too,” said Florida State’s Jimbo Fisher, who served as an SEC assistant for more than a decade and ushered out the BCS era by snapping that conference’s seven-season championship streak. The last college football postseason of its kind, which kicked off its big-money bowls with a Rose game worthy of an Oscar-bait flick, wound down with a cinematic finish in the most exquisite setting in sports, a denouement that might easily have been dismissed as implausible had it not happened in front of the eyes and screens of a goggling nation.

Following the 1998 season, Florida State suited up for the inaugural BCS title game and sustained a 23-16 loss to Tennessee. The Seminoles appeared in the next two championships, besting Virginia Tech for the 1999 title and losing the 2000 crown to Oklahoma, but hadn’t been back until Monday night. That return came in time for the last college football finale before the implementation of a playoff system, but it came earlier than many anticipated, thanks to an early-blooming freshman quarterback, a host of uncannily talented skill players, and a percussive defense. And for too many early minutes, the Seminoles looked completely bewildered to be there.

It’s understandable. The Rose Bowl setting is all-enveloping, even dizzying, including for those not there to lace up cleats and hit people. But this jerky, ill-constructed carnival ride of an early game transformed into a sleek steel coaster in the final minutes of the fourth quarter, making the initial heaves entirely worth it, from a dramatic standpoint.

If you’ve been looking all season for Jameis Winston to play like a redshirt freshman in his first season of college ball, you’ve had a long wait, but this was your night. For three-plus quarters, Winston delivered the worst start of his short career, though he got a lot of help from a jarringly malevolent Auburn defense and his own receivers alike. Amplifying FSU’s rickety start: Auburn’s tempo versus the Noles’ defense, a stellar performance from Tigers punter/siege engine Steven Clark, and another otherworldly outing from alleged human Tre Mason.1

Last seen recording 304 ground yards versus Missouri in the SEC championship game, Mason lists at 5-foot-10 and 205 pounds, and cannot be a carbon-based life form. No human flesh could be so light, and yet run with such force; we must conclude that Mason is constructed of some sort of heretofore undiscovered cosmic rock and should be studied by astronomers. Go back over his film this season and watch. Even when he’s not breaking out for 11 yards or more, which he does QUITE OFTEN, Mason takes a handoff or catches a quick pass and disappears into a tesseract. You can just make out a faint shimmer, and by the time you uncross your eyes, the chains have moved. The net effect is that he appears to move so quickly that even when defenders have a good idea of where he’s going, the celestial cannonball is a third of the way to a new first down by the time they can lay hands on him. Mason’s first touchdown put the Seminoles behind on the scoreboard for the first time since that late-September squeaker against Boston College.2

This beautiful, beautiful Nick Marshall–to–Melvin Ray touchdown seemed to augur well for the expected title game blowout, only in the opposite anticipated direction:

Marshall did his own legwork to put the Tigers up 21-3, and the 0-0 for the 2013 title game began to appear badly miscalculated. Winston fumbled. Rashad Greene dropped a key third-down pass. This was already a deeper well than the one the Noles clambered out of in Chestnut Hill, but remember how they did that, with the Hail Mary at the end of the first half? The title game called for a little something special:

Order reasserted itself on the Seminole sideline following that fake punt. Karlos Williams ran for seven yards; Greene tacked on a seven-yard catch, then a 12-yarder. Winston delivered a “Family Circus”–style scramble reminiscent of his Heisman predecessor, and Devonta Freeman did the rest. The title contenders took to the locker room with Auburn leading 21-10 at the half, and the Noles looked to have at least a firm grip on the rim of the well.

A three-and-out to open the half and another lethal punt from Clark saw Florida State again gulping water and flailing to little effect against the bonds of supremely disadvantageous field position. Human highlight reel Kelvin Benjamin recorded another crucial drop. Winston sustained his third and fourth sacks. Auburn’s #blessed-ness was in full effect. Heading into the fourth quarter, by the grace of a long Roberto Aguayo field goal and reanimated defense, the Noles trailed 21-13 in a game that still didn’t feel all that close.

That changed four plays into Auburn’s first possession of the final period, when P.J. Williams picked off Marshall at the Florida State 40, fumbled the ball, and saw Lamarcus Joyner pick it up for the Seminoles.

This is what’s known in the business as the ultra-rare “happy jump sad jump happy jump,”3 and it perked the Rose Bowl up right quick. The yards came in small piles for FSU from there, and quickly: a Freeman reception for eight yards, then a run for 16 more; a Winston-Benjamin connection for 21; and then this:

Not even a celebration penalty on Freeman, delivered with punctilious gusto by Big Ten officials seemingly determined to remind all in attendance whose house this is, could stultify the stadium atmosphere for long. Auburn staged a quarter-devouring field goal drive to take a four-point lead, 24-20, and that’s about when things went sideways.

Stop us if this one looks familiar.

We want nothing more from life right now than to go back to this moment, already awash in Kermit Whitfield’s field-spanning dash, and live the final four and a half minutes of this game over and over again. Hold fast to the final third of this fourth period to sustain you through the football-free months ahead. It’ll keep. Start right here, with the stadium already shrieking at the replay of Whitfield’s 100-yard kickoff return, and watch Marshall hit Sammie Coates with two big passes to set up, one more time, Mr. Mason, he of the unknown molecular makeup:

Blink and you’ll miss a hidden comedic gem: a defensive back throwing up his arms in cartoonish exasperation at having missed Mason. Don’t be too hard on yourself, kiddo. You had plenty of company, and have the tesseract to blame. You’re also part of living history now, having been one of the closest witnesses to watching Mason break Bo Jackson’s single-season school rushing yardage record.

On the second ensuing Florida State play from scrimmage, Greene bolted 49 yards to Auburn’s 23.4 A delay of game on FSU moved the teams back; pass interference on Auburn moved them up again. And then, in a little moment that seemed quiet at the time and came and went before anybody was really able to gasp or point or form words of warning, Benjamin’s hands flew up over his head:

The 13 remaining seconds sent Florida State to 14-0, bracketing the age of the BCS with a barrage of chest-rattling blasts befitting the tail end of a four-month fireworks show. Queen blared out from the Rose Bowl speakers. Seminole players strolled toward their band, arms outstretched, cleats stirring up eddies of red paper and gold glitter, soaking in waves of sound and adulation.

The crane shot in our mind’s eye will keep lifting up and out and over the San Gabriel Mountains, as the Florida State band picks up where Freddie Mercury left off and begins a “We Are the Champions” coda. We have months to figure out Just What This All Means for Fisher’s legacy, the ACC, and the SEC. For now, sleep, bask in the afterglow of a rich season, and be thankful.