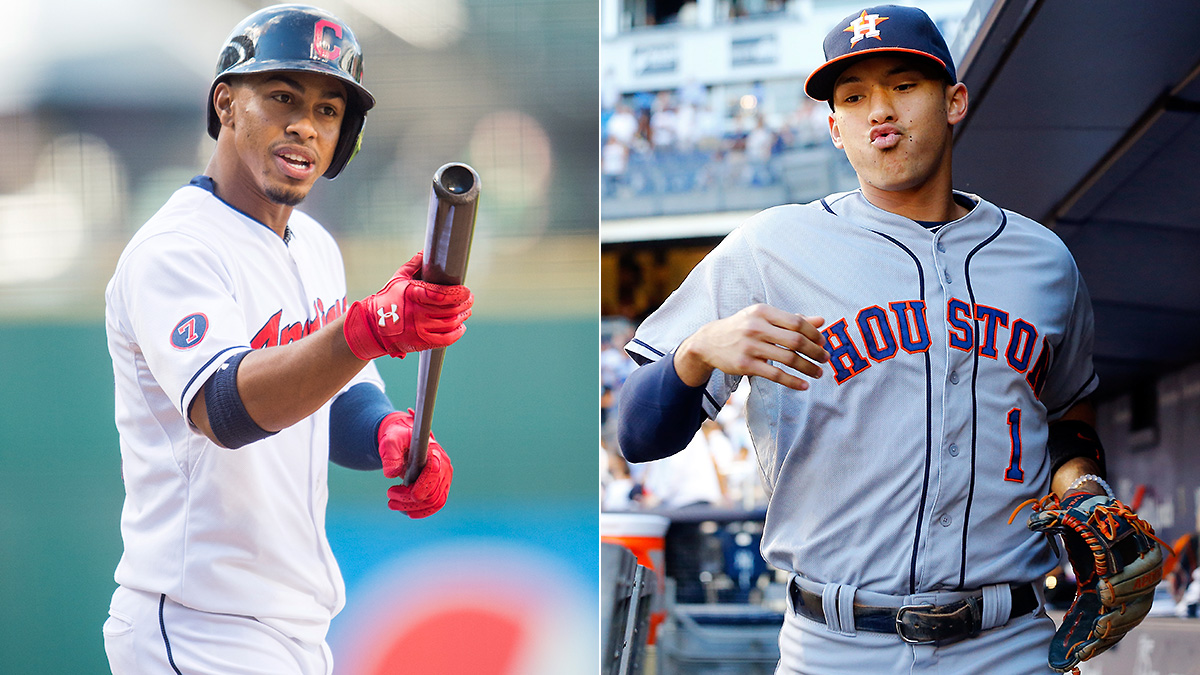 With all the time and energy that’s been spent discussing, evaluating, and lauding this year’s rookie class, we probably could’ve cured some significant disease or sent half a dozen people to Mars or something. This is extremely well-covered territory, and so now that it’s time to choose between outstanding young shortstops Carlos Correa and Francisco Lindor for AL Rookie of the Year, you’d be forgiven for expecting it to be easy to build a case for one over the other.

Not so. Houston’s Correa and Cleveland’s Lindor are proof that two journeys that start and end in almost exactly the same place can take radically different forms along the way.

Correa and Lindor are both 21-year-old shortstops from Puerto Rico. Lindor was drafted eighth overall in 2011, while Correa, who’s about 10 months younger, went first overall the next year. Neither was ever ranked lower than no. 26 in an offseason Baseball Prospectus prospect ranking, and by last offseason, BP ranked Correa third and Lindor fourth.

Correa made his major league debut on June 8, Lindor six days later, and since then, they’ve been more or less equally valuable: Baseball-Reference, FanGraphs, and Baseball Prospectus all have them within seven-tenths of a win of each other in overall value, and over two-thirds of a season, that might as well be a dead heat.

Ordinarily, we’d settle such a close statistical race with a narrative tiebreaker, but there’s not much space there either. Both are young, exciting players who’ve been touted as future superstars since they were in high school. Both are performing their best in the middle of a pennant race — Correa by jumping into the middle of one of baseball’s most potent lineups, and Lindor as part of a midseason adjustment that changed Cleveland’s defense from one of the worst in the game to one of the best.

The AL Rookie of the Year race is so close, you could honestly decide it on personal preference. Since Correa and Lindor are so similar in terms of value, potential, and narrative, let’s take a look at how they’re different.

Correa was big when he was drafted as a 17-year-old, and he’s filled out since then, as most young men do. He’s listed at 6-foot-4, 210 pounds, and is probably at least 10 pounds heavier than his listed weight at this point. Far from being musclebound and stiff, he’s lean and slim while still being intimidatingly large, which is to say he almost begs you to drag him off the baseball diamond and start throwing him fade routes in the back corner of the end zone.

Long before Correa was born, Cal Ripken proved you could play shortstop at 6-4 and more than 200 pounds, and just as the Wright brothers inspired people to copy and improve on their work, so did Ripken; by 2000, huge, power-hitting shortstops were common. Ripken gave way to Jeter and A-Rod, who gave way to Troy Tulowitzki and Ian Desmond. Even Mike Morse has 453 major league innings at shortstop under his belt.

Correa and the Dodgers’ Corey Seager are the next in that line of monster athletes who hit like left fielders but have the quickness and hands to stay not only on the dirt, but up the middle. Correa spent the first two months of the season in the minors and still has more homers than any other shortstop, and his 135 wRC+ is tops among shortstops of any age (minimum 400 PA) and puts him 22nd in baseball at any position. He’s got a slight edge in slugging percentage and isolated power on Kris Bryant, the top rookie in the NL.

Correa’s home park is ideally suited for a right-handed power hitter, with the left-field foul pole only 315 feet from home plate, and only a few dozen rows from the Crawford Boxes to the exterior wall of the stadium, which means certain low-trajectory home runs come crashing off the Halliburton sign in left-center and back onto the field of play. That doesn’t make it easier to hit home runs, I guess, but it does make it more fun.

Correa has also stolen 12 bases this year, but he doesn’t have top-end speed. What he does have is the smooth, long-striding gait that makes him look a little like Manny Machado or Scott Rolen in the field. Correa doesn’t scamper to the ball and stab so much as he chases it down, envelops it, and expels it toward first base on a rope.

Meanwhile, the defensive metrics, useful as they are with the normal caveats about volatility and sample size, seem to think he’s a slightly below-average fielder. UZR (which goes into FanGraphs WAR) rates him as 3.9 runs below average, while DRS (Baseball-Reference) has him as a run above average, and FRAA (Baseball Prospectus) has him at 2.5 runs below average. I wouldn’t bet my life on the accuracy of any of those numbers to a tenth of a run, but they’re only somewhat uncharitable compared to how he looks on the field: He’s got enough tools to play a competent shortstop now, but he’s not going to win a Gold Glove there, and he’s probably a few years from being a very good defensive third baseman.

Still, there’s no shame in Correa not being as good of a defender as Lindor, nor controversy around saying so.

Lindor’s glove has been his showpiece throughout the minors, and he’s adapted to the big leagues nicely. UZR has him at 7.2 runs above average, DRS at plus-7, and FRAA at plus-1.3. That disparity means that while he’s certainly been good, there’s still some disagreement over how good. Where you stand on that disagreement — which is part and parcel of any discussion of advanced fielding metrics — ultimately determines whether you think Lindor is a better all-around player than Correa.

If nothing else, Lindor, at a sprightly 5-11 and 190 pounds, is built like a shortstop, as opposed to Correa, who’s built like Brandon Marshall. Lindor is outstanding going to his right, and while he doesn’t have the arm strength to make it look pretty the way Andrelton Simmons does, neither do most other shortstops.

Because of his defensive ability, Lindor was never supposed to have to hit much in order to be a first-division starter or more. A plus defender at shortstop with a league-average bat is going to make the All-Star team every year, particularly in today’s defense-first environment.

But he is hitting, and hitting better than could reasonably have been expected. Correa’s 135 wRC+ is tops among all MLB shortstops, but Lindor’s 131 wRC+ is second. As you might expect, Lindor came by his stats in a different manner than Correa did. If Correa were a land unit in Civ V, you wouldn’t be able to build him until you discovered Dynamite. As a switch-hitter, Lindor keeps his hands low from both sides of the plate and has a compact swing that reliably gets barrel to ball. His 11 home runs haven’t screamed out of the park, but his offensive game is more about tagging line drives that float like a Frisbee, then running to second or third base like a wolf chasing down a bison.

Lindor’s offensive outburst has inspired Indians manager Terry Francona to place his rookie shortstop second in the batting order, and in that spot he’s been one of Cleveland’s best players. He’s also exhibited excellent bat control, which, at times, leads to him breaking up no-hitters,1 but also brings up his most glaring and bizarre weakness.

While bunting for a hit takes skill, speed, courage, and guile, sacrifice bunting is just a bad percentage play, and Lindor has laid down an inordinate number of sacrifice bunts. Thirteen, to be exact, which is four more than any other position player in the game, and 13 more than should have been attempted once you take into account that not only is Lindor a really good hitter, but that he’s only been up since the middle of June.

Blame usually falls to the manager in such situations, but Francona knows the value of an out better than most managers, so Lindor’s compulsion to bunt never quite felt right. Now we know that Lindor was as often as not bunting on his own initiative, which is really horrifying.

We expect managers to bunt too much, because managers are dumb about that kind of stuff in general, but we don’t expect the same from players. Particularly not from exciting 21-year-olds who are slugging .488. And I worry that while Lindor is fantastic, giving him the Rookie of the Year award would encourage bunting, and that’s unacceptable.

Nevertheless,2 while I don’t think Lindor’s nearly as talented a hitter as Correa, Correa’s offensive numbers aren’t so much better than Lindor’s that I can ignore Lindor’s defensive advantage. So Lindor can be the Rookie of the Year if he promises to stop laying down so many sacrifice bunts.

NBA Media Day Winners and Losers: KD Is Back, Bargnani Is Wax, and More