The Young and the Restless: What’s Behind Baseball’s Onslaught of Blue-Chip Prospect Debuts? 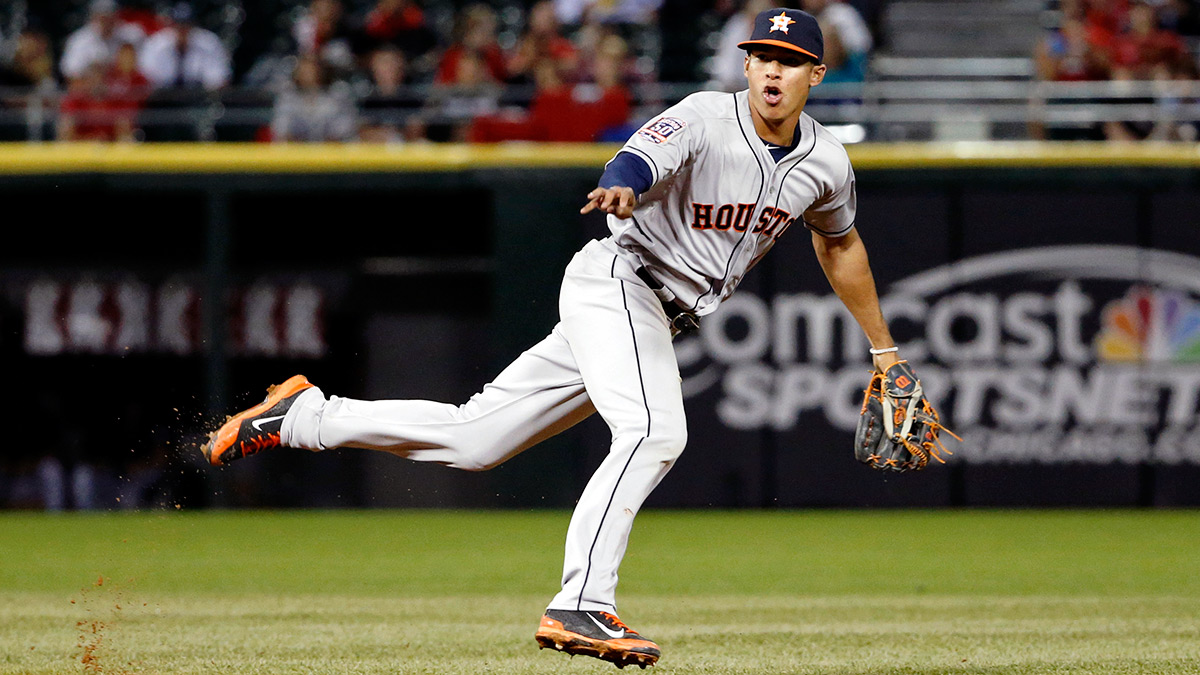 Astros starting pitching prospect Vincent Velasquez got the best possible gifts for his 23rd birthday: not just a promotion to the majors, although that was thoughtful, but also a chance to face the White Sox, whose nonpitchers have hit about as badly as any other team’s in the wild-card era. As big league debuts go, the rookie right-hander’s was an easy assignment, and he handled it well, pitching five scoreless innings while allowing three hits and striking out five.

Velasquez’s first start stands out for two reasons, aside from the fact that he’s now the first “Vincent” in major league history not to go by a nickname.1 From a team-centric perspective, Velasquez’s arrival represents another step away from Ed Wade’s Astros and toward a winner that looks like a product of GM Jeff Luhnow’s regime. The Astros’ long-dormant farm system has erupted recently, producing 21-year-old starter Lance McCullers last month and 20-year-old shortstop Carlos Correa on Monday. Despite their recent slide, the Astros are more likely than not to make the playoffs, and they’re doing all that they can to patch their flats from within.

More generally, though, Velasquez is a story because he strengthens what had already seemed like an unusually robust crop of prospects making the jump to the majors this season. Velasquez ranked 75th on the preseason prospect lists at both Baseball Prospectus and FanGraphs, and 56th according to ESPN analyst Keith Law. But even going by those numbers, and not his less impressive preseason ranks at MLB.com and Baseball America, Velasquez is a penny stock compared to some of the prospects who’ve preceded him. The table below lists the prospects from BP’s February top-101 ranking who’ve gotten their first big league looks this year:

The names differ slightly depending on your preferred prospect ranking, but the totals are similar across sources. If you like Baseball America’s list, add Joe Ross, Raisel Iglesias, and Yasmany Tomas, and subtract Hedges, Lorenzen, and Velasquez. The list is still 15 players long.

So is 15 freshly minted major leaguers from a spring prospect list an abnormally high number through this point in the season? With research assistance from Baseball Prospectus’s Rob McQuown, I looked for the number of top-100 prospects who debuted through June 10 of each year, using BP’s annual lists from 2007 to 2014 and Baseball America’s before that, beginning in 1990. 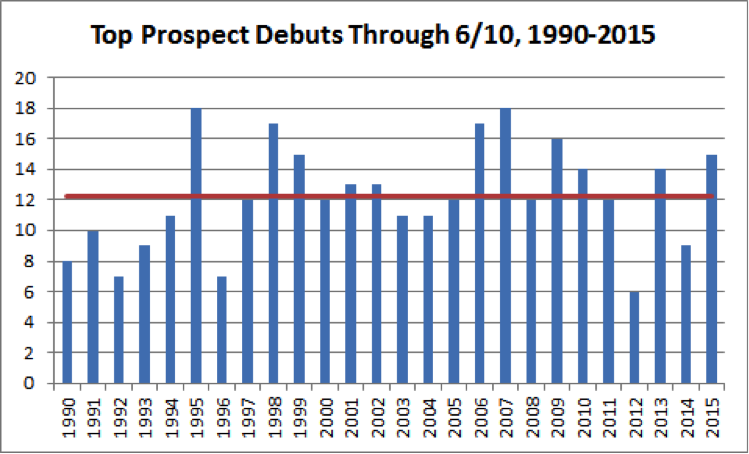 Fifteen is the highest sum since 2009, comfortably above the 26-season average of 12.3. But historically speaking, it’s not an extraordinary number, having been topped five times.

Of course, there’s an important part of the picture that we haven’t taken into account: the quality of the promoted prospects. This year’s minor league graduates include three of the top five preseason prospects and four of the top 10. That’s some serious pedigree. Compared to previous years, this season’s promoted prospects have a significantly higher average rank — higher ranks, in this case, signifying lower numbers. 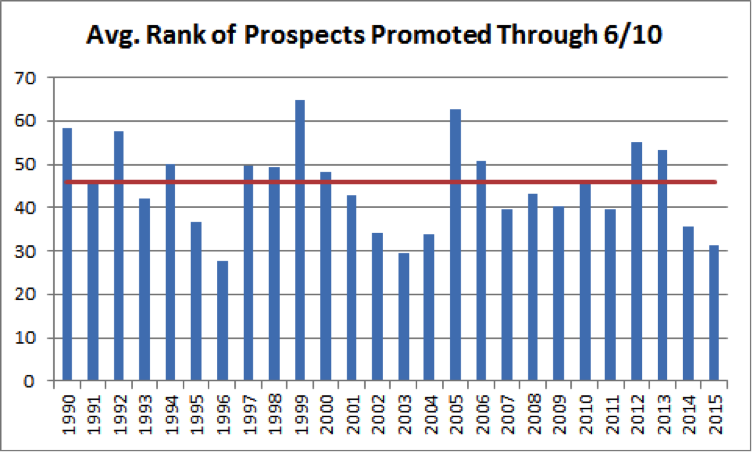 This year’s top-prospect debutantes have an average rank of 31.2, the third-lowest of any season in the sample. The combination of above-average prospect quantity and unprecedented prospect quality sets this season apart.

Studies have shown that lower-tier top-100 prospects like Velasquez and Plawecki barely belong on the same list as highly ranked position players like Russell, Correa, and Bryant, who produce far higher career WAR totals on average. In order to give a greater weight to the prospects with rosier futures, I inverted the rankings, putting the prospects in descending numerical order, with the top prospect ranked 100 (or 101, in BP’s case for the past several seasons) and the former last prospect on the list ranked first. That way, the better the prospect, the bigger the number. Then I added up the sum of those inverted prospect ranks for each season, still limiting the sample to players who debuted no later than June 10. The more players made the leap by that date, and the better their ranks prior to Opening Day, the higher the group’s collective score. 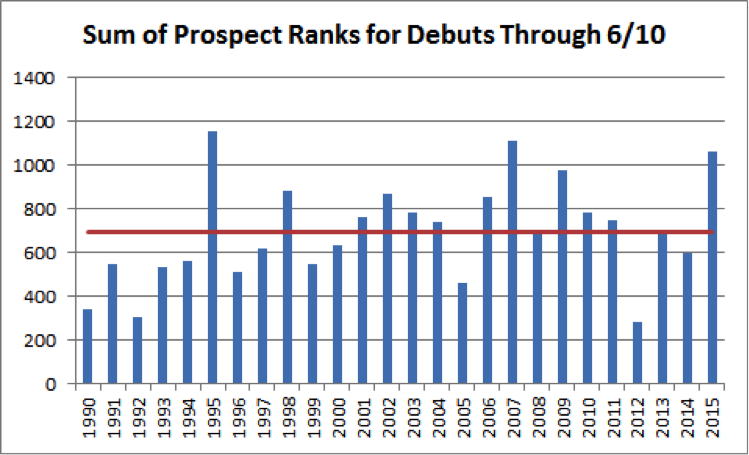 This year’s total is more than 50 percent higher than the average year’s, and only two seasons in the last 26 (1995 and 2007) have surpassed it. We’ll discuss those seasons later, but before we try to analyze why we’re seeing so many studs all of a sudden, we should pause to savor the moment. Regardless of the reason for so many promising players appearing in such a short span of time, it’s not often that the first two months of a season put on such a prospect parade. Some of the phenoms who’ve just made it to the majors are likely to be among baseball’s biggest stars for the next 15 years, and we’re getting to watch them take their first steps at the same time. To make matters more surprising, the season started later than usual this year, leaving less time for call-ups, and teams have become more conscious of the financial drawbacks of promoting prospects early, which often leads to delays.

OK, perspective imparted. So to what can we credit this year’s early prospect rush?

There’s always the easy, unsatisfying, and often correct explanation: It might mean nothing. Maybe this year’s top prospects happened to be older than the usual group and thus closer to the majors. The bar graph below shows the collective age of each year’s top 100/101 prospects, computed by taking the average of each individual player’s age (in days, converted into years) as of April 1 of the given season. 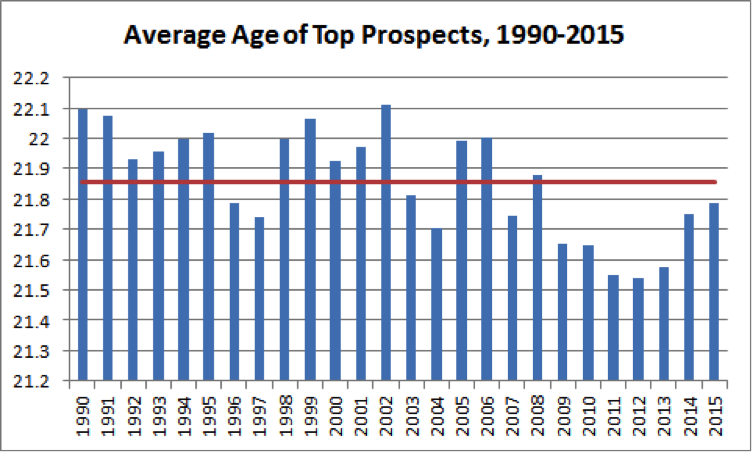 Nope, that’s not it. Intriguingly, there’s a trend toward slightly younger2 top prospects in recent years, either because newer prospect lists have placed a higher premium on youth, or because the best prospects are actually skewing younger because teams have gone heavier on high-schoolers in the amateur draft.

Alternatively, maybe this year’s list just happened to have fewer prospects with MLB experience — guys who’d gotten cups of coffee but hadn’t had enough big league playing time or days on the roster to lose their rookie eligibility. The following chart shows the number of players on each list who had already made their major league debuts by the time they earned their ranking.

This explanation makes more sense. On average, the preseason rankings have included 21.9 players with big league games under their belts. This year, there were only 14 — Dylan Bundy, Joc Pederson, Jorge Soler, and so on. Obviously, fewer prospects on the list who’ve already debuted means more players who could potentially debut in the first half of the season.

But it’s not unreasonable to think that this season’s quick call-ups might be more than a coincidence. Think back to the two seasons with even more early call-up action than this year’s, 1995 and 2007. The first of those years was a special case: Because the 1994 season ended in an August strike, there were no September call-ups that season. As a result, a prospect backlog built up, which was released right after the following season started. Twelve of Baseball America’s top 100 prospects debuted in the big leagues on or immediately after 1995’s delayed Opening Day: Todd Hollandsworth, Antonio Osuna, James Baldwin, Ray Durham, LaTroy Hawkins, Edgardo Alfonzo, Michael Tucker, Frankie Rodriguez, Jason Schmidt, Andy Pettitte, Juan Acevedo, and Ron Villone. Had the strike been averted, many of those players would have gotten their first appearances out of the way the year before, which probably would have put 1995 behind 2015 on the early call-up leaderboard. 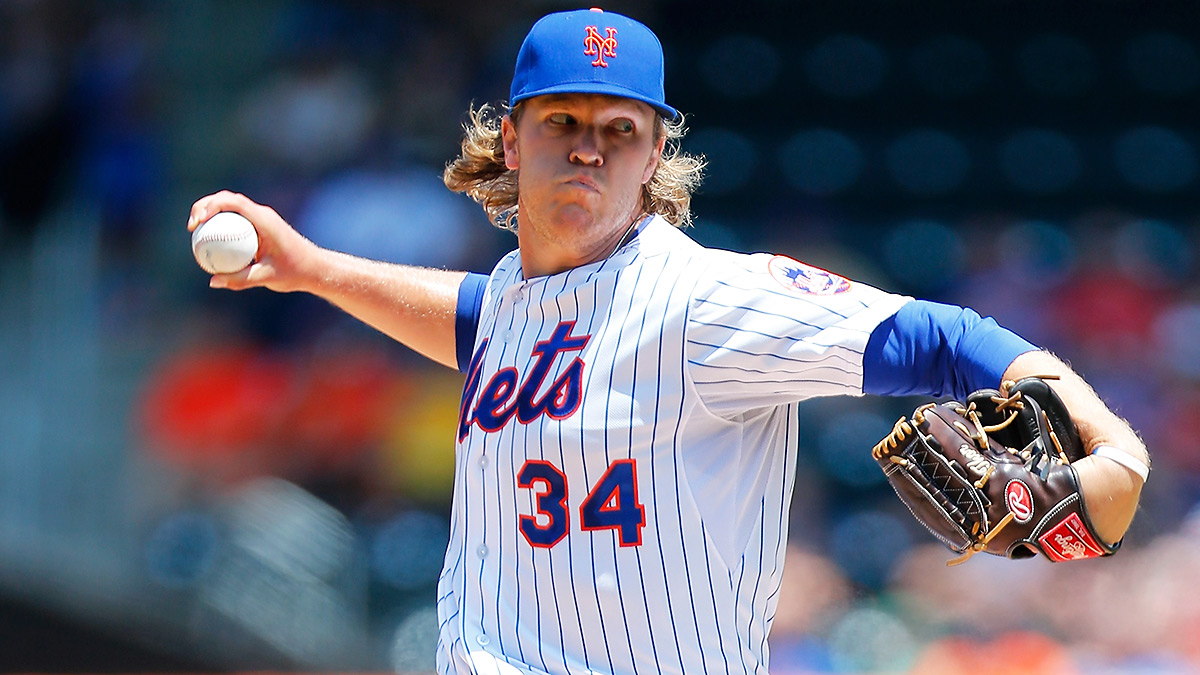 There was no strike in 2007, but that year was unusual in another notable way. In March, I wrote about how close the projection systems said this season’s standings would be, and I compared today’s parity to 2007’s. In the spring of 2007, the National League seemed so deadlocked that the projection systems’ forecasts peaked at 86 wins. As it turned out, no NL club won more than 90, and no team in the majors won or lost 100. In the 17 full seasons in which MLB has fielded 30 teams, the only year with a lower standard deviation3 in win totals than 2014 was 2007. It was a year when every win mattered more than usual, so it makes sense that teams would have waived their normal concerns about starting their prospects’ service clocks.

That’s where we are again. Not every call-up listed above is an example of a team aggressively going for it out of fear that one win will make the difference: Swihart and Plawecki were more like last-resort moves after injuries to catchers who were ahead of them on the depth charts (although there are always journeyman glove guys available). But in many of these cases, GMs acted with less regard for the future than for what would help them win now — the kind of move fans always want teams to make, even if they know that in the long run a different course could make sense. We’re just now reaching the Super Two cutoff date, beyond which teams don’t have to worry about losing money and a future year of service if they give their prospects playing time. Correa and Velasquez are almost certainly safe, but the prospects who came up earlier are very much in play. Their employers knew that when they promoted them, but they chose to make the moves anyway.

Would Rangers GM Jon Daniels have promoted both Gonzalez and Gallo, his top two prospects — the latter as a temporary replacement for Adrian Beltre — if the AL West weren’t wide open? Might not the Astros have talked themselves into giving Correa & Co. more development time if they hadn’t started contending ahead of schedule? Would the Cubs have called up Russell in April, when he’d barely made it to Triple-A, if they weren’t confident in their ability to hang with the Cardinals? Would the Mets and Nats, respectively, have found room in their crowded rotations for Syndergaard and Cole if they weren’t both jockeying for first? Would Padres GM A.J. Preller have extended his win-with-whatever-move-necessary offseason strategy to cover converting top prospects into lightly used backup catchers? We might answer “yes” to some of those questions, but in a more lopsided season, not all of these prospects would be in the big leagues by now.

Another wave of prospects should reach shore soon. Mets pitching prospect Steven Matz has a sub-2.00 ERA in 12 games for Triple-A Las Vegas, an impossible pitching environment, and might be up this month. Indians top prospect Francisco Lindor has posted a well-above-average OPS in the International League despite being a shortstop who’s almost six years younger than the average Triple-A player. Similarly, 21-year-old Dodgers shortstop Corey Seager is more than holding his own in Triple-A after moving up from Double-A in May. We’re likely to have seen most of the spring’s top 10 prospects by the end of September.

It’s already growing hard to remember that this season started amid outrage that the Cubs were holding back Bryant with an eye toward 2021. In retrospect, this was the wrong season to make a stink about teams putting their finances (or their futures) before their present playoff odds. Up to this point in the season, we’ve been treated to a rare display of blue-chip debuts. And while there’s certainly a cyclical element to the ebb and flow of prospect promotions, the story of 2007 suggests that some of the accelerated pace we’ve seen this season is attributable to the fact that the competition for playoff spots is even fiercer than it was when there were fewer to go around. If you’re sick of seeing tomorrow’s superstars in standard definition, you can put early access to prospects in the plus column for parity.