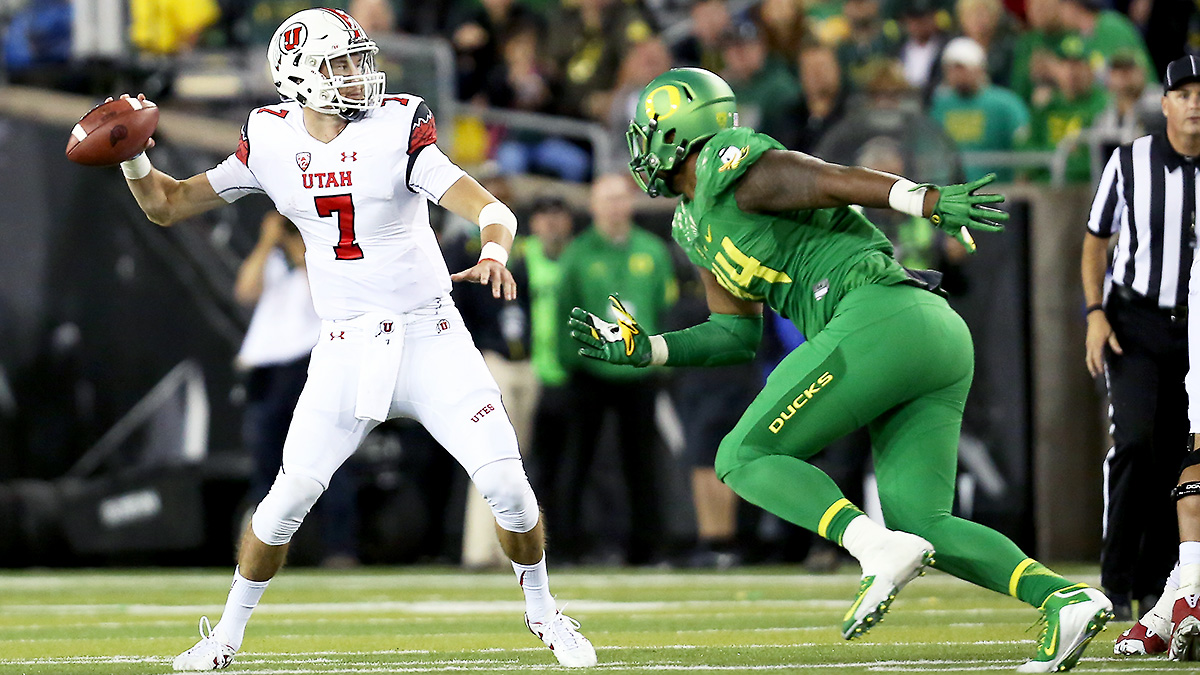 There is no system of promotion or relegation in American sports, but college football, especially in recent years, has come the closest to replicating that aspirational dynamic. This was not entirely intentional, but rather the product of a system that’s long been top-heavy and perplexingly Gatsbyesque, with the sport divided into the haves and the have-lesses, the majors and the not-so-majors, and with those in the latter categories clinging desperately to the dream of an upper-class existence.

And so it was that five years ago, in the midst of a near-pathological series of major-conference shakeups that often defied logic and geography — and in the wake of a blistering run through the Mountain West Conference that heralded the rise of a young coach named Meyer and encompassed a pair of undefeated seasons — Utah elevated itself out of mid-major purgatory and became a member of what was set to become the Pac-12. I am not entirely certain about the machinations of realignment decisions and how they are made and what sort of political scheming is involved, but I am pretty damned certain that if Utah had not proved itself to have mastered football, Utah would still be a member of the Mountain West.

Since then, to be completely honest, nothing much has happened for the Utes. They’ve been there, but not really there in any way that aroused tremendous national interest. They have been a respectable addition to major-college football, the kind of team that always seemed overarchingly competent and perpetually capable of an upset; occasionally, when the moment was right, they even pulled off those upsets. But they were never a first-tier contender in the Pac-12 South; after tying for third in the division their first season, they finished fifth the past three years, and last season was the first in which, at 5-4, they managed a winning record in conference play. They were a Pac-12 school without much of an identity beyond the past success that had gotten them into the league in the first place; they were locked somewhere in the hazy middle of a vastly improving conference defined by programs with sexier locations and pedigrees and head coaches. They were not Colorado, but they sure as hell weren’t Oregon, either.

I don’t know if any of that changed for good last weekend, but it felt like maybe it could have. I thought Utah could potentially keep it close with Oregon on the road last Saturday night, given how the Utes had dispatched a perpetually improving Michigan team in Week 1. I thought maybe Utah, despite a nagging injury to its (very tall) starting quarterback, Travis Wilson, could pull off an upset against an Oregon team dealing with more disarray than it has throughout this decade. But no sane human saw the end result coming; no one foresaw Utah putting up 62 points and winning by six touchdowns as Wilson and running back Devontae Booker played brilliantly and the Utes blew the Ducks out of the water on their home field to make one of the most emphatic statements of this young season. And the obvious questions, in the wake of that game and Utah’s rise to no. 10 in the AP poll, center, once more, around those vague notions of relegation and promotion: Does this signify that Oregon is on the verge of a major fall?

Or is it possible that Utah is actually this good? 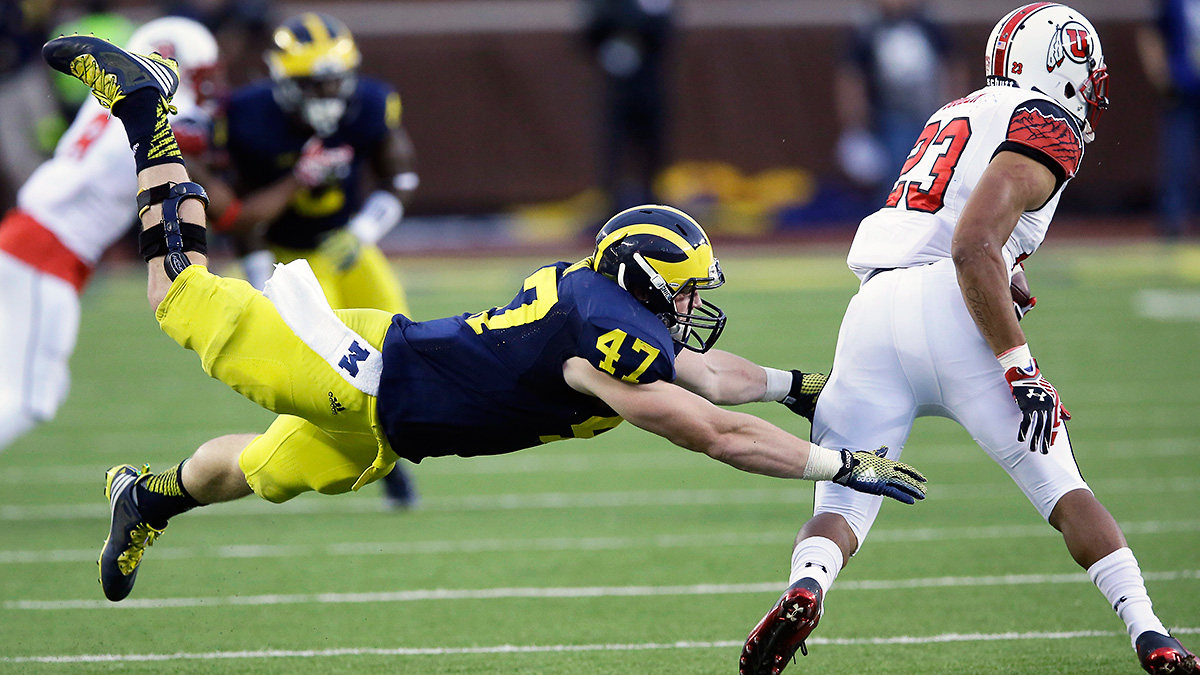 Carlos Osorio/AP Photo Devontae Booker and Utah opened 2015 with a win over a Michigan team that has since gone 3-0.

Go back and reexamine Utah’s 2008 season and it looks even better in retrospect: The Utes beat a ranked Michigan team1 (on the road) to start that year, too, and then they beat an Oregon State team that would end up with nine victories. They blew through the Mountain West without a blemish, defeating 11th-ranked TCU (the aspirational program of the decade to date) by a field goal, blasting ranked BYU by 24 points, and overcoming fourth-ranked Alabama by two touchdowns in the Sugar Bowl. To be fair, this was at the front end of the Nick Saban era at Alabama; but if the modern system existed back then, it’s not unfathomable to believe the Utes could have made the College Football Playoff, knocked off the Tide, and then defeated an Urban Meyer–coached Florida team to win it all, thereby napalming the system of haves and have-nots to pieces.

Perhaps, if you are a casual follower of this sport, you did not even know that the coach of that Utah team is the same coach the Utes have now. His name is Kyle Whittingham, and he’s been at Utah for more than 20 years in some capacity, having worked as an assistant under Meyer and Meyer’s predecessor, Ron McBride. I will admit: I write about this sport for a living and I know very little about Whittingham, except that whenever I watch Utah play, I think to myself, This team is well coached. Not that this is enough to satisfy the fan base of a program now ensconced in a conference with the nation’s most intriguing collection of coaches: At times, Whittingham’s offense has sputtered, and until perhaps this year, the knock on him was that he never had really produced the kind of first-rate quarterback that the conference has been churning out in droves the past few seasons.

How restless did Utah fans get? After consecutive 5-7 seasons in 2012 and ’13, Whittingham’s job was on the line; but even after last season, when his team won nine games and blew out Colorado State in the Las Vegas Bowl, he still nearly left Utah, due in part to an apparent rift with the school’s athletic director over contracts for his assistant coaches. Whittingham lost his defensive coordinator and his offensive coordinator in the midst of this back-and-forth, which is what makes the win over Oregon seem even more improbable, as this was very easily a program that could have succumbed to internal disarray.

Instead, Utah did what it needed to do to stand out in a conference that is driven by offense and quarterback play. The Utes scored points in bushels, and they showed creativity, and in throttling the Pac-12’s most interesting and dynamic team, they proved to be the more interesting and more dynamic team; now, they have to prove it again in the weeks to come, against Cal on October 10, and perhaps, if this thing keeps going, against UCLA in a late-November matchup that could potentially decide the Pac-12 South.

That’s the thing about big-time football: Most of the time, quiet competence is not enough. There will always be a demand for something more, for something bigger, for some way to keep pushing into the upper class, the way Oregon once did by branding itself through showmanship and verve. Until the last few weeks, Utah had not really displayed any of those things. But that’s not true anymore. A few more wins, and maybe the Utes will prove that they’ve worked their way up the system from the inside.

Carolina's Defense Has Been Great ... Against Three Bad Teams