Carolina’s Defense Has Been Great … Against Three Bad Teams 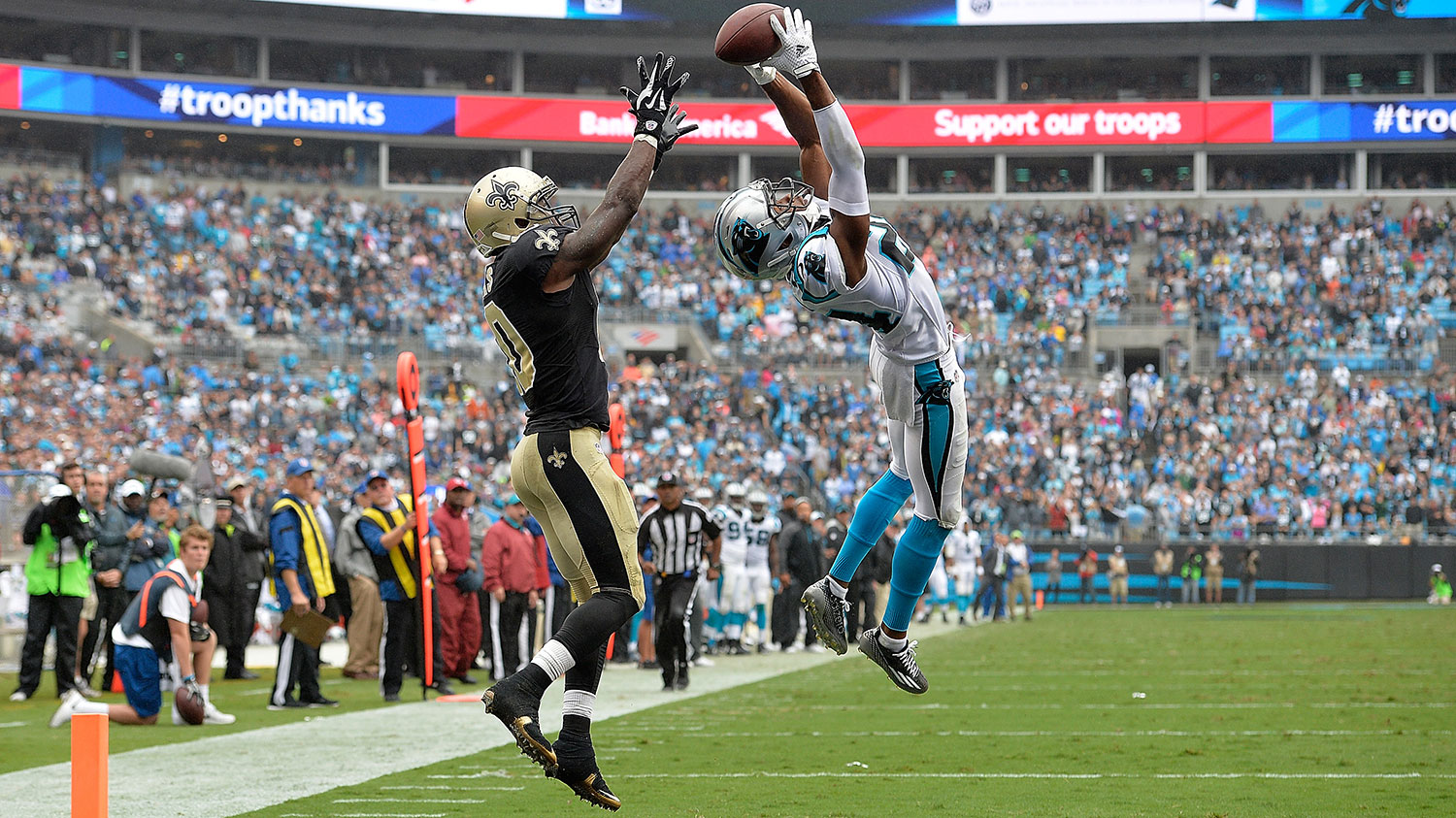 The Panthers are 3-0 for the first time in Cam Newton’s career, but his ability to leap defenders in a single bound isn’t the main reason they have realistic hopes of winning the NFC South for the third consecutive year. Carolina fans should be thanking a soft schedule and a stingy defense that’s holding opponents to 16.0 points per game, the NFL’s second-best mark behind only the Jets.

Such defensive dominance — Carolina is no. 4 in unweighted defensive DVOA — is a continuation of last season’s unexpected surge to the playoffs. After starting a dreary 3-8-1, Carolina put together a five-game winning streak while allowing only 11.8 points per game1 before losing 31-17 to the Seahawks in the divisional round. Despite the three victories, what’s different this year is that Newton seems like the only player left standing on a team bombarded by injuries.

The decimation began in August, when defensive end Frank Alexander — one of the top candidates to replace Greg Hardy, who is now in Dallas — tore his Achilles and 2014 first-round receiver Kelvin Benjamin tore his ACL, depriving Newton of his new toy. Defensive tackle Star Lotulelei missed the entire preseason with a nagging injury to the foot he fractured in January. Then, in the season opener, middle linebacker Luke Kuechly, the 2013 Defensive Player of the Year, suffered a concussion that has sidelined him for two games and counting. If all of that weren’t enough, defensive end Charles Johnson hobbled off the field like the Tin Man in need of an oil can during Sunday’s win over the Drew Brees–less Saints. Johnson, who reaggravated a hamstring injury that caused him to miss much of training camp, was placed on short-term injured reserve this week and can’t return until the Thanksgiving game against the Cowboys.

For a team that relies on its defensive line to create pressure, Johnson’s injury is a big blow. Only four teams have blitzed less frequently since 2011, the year head coach Ron Rivera and defensive coordinator Sean McDermott joined the franchise. Last season, Carolina cobbled together 40 sacks without Hardy; now, its most consistent pass-rushing source is missing. Johnson has ably filled that role since Julius Peppers’s departure, posting at least 8.5 sacks in each of the past five seasons.

This offseason, 2014 second-round pick Kony Ealy beat Wes Horton and Mario Addison for the starting job opposite Johnson, but he’s still looking for his first sack or quarterback knockdown in 2015, so the Panthers went looking for reinforcements this week. They ended up trading for veteran pass-rusher Jared Allen,2 who is returning to the familiar role of a hand-in-the-dirt 4-3 defensive end after looking marginalized as a stand-up linebacker in Vic Fangio’s new 3-4 defense in Chicago. It’s a low-risk move for Carolina, which gave Chicago a conditional sixth-round pick, owes Allen only $823,000 this season, and can cut him without financial penalty before a massive $8.5 million base salary is owed in 2016.3

Although the 33-year-old has some juice left — see this athletic interception of Carson Palmer from Week 2 — his declining skills make it unlikely he will be a savior for this depleted group. That burden will likely fall on fourth-year cornerback Josh Norman, who is anchoring a shutdown pass defense that has allowed the NFL’s fewest yards per pass attempt and the third-lowest passer rating. Football Outsiders ranked Norman the league’s fourth-best cornerback in 2014, when he began turning heads by regularly shutting down top receivers, and he’s gone even further in 2015, making enough game-changing plays to be named the NFC’s Defensive Player of the Month.

Norman may not yet have gone full Richard Sherman, but his ball skills and anticipation haven’t being ignored by offensive coordinators this season. New Orleans consistently ran plays to the other side of the field Sunday, perhaps in response to Norman’s shadow coverage of DeAndre Hopkins in Week 2, when he helped limit Houston’s top receiver to five catches for 53 yards on 11 targets. Only once did Luke McCown test Norman down the sideline, and it ended with a heavenly ascension during which Norman leaped backward and snagged the ball to prevent Brandin Cooks from scoring the winning touchdown. “Once I saw the ball release, man, I was loving it,” Norman said. “I saw it, and my eyes got big. I tried to target the ball, and God gave me the wings to fly.” It was an incredible play; Norman reached what appeared to be his apex, and then continued to rise.

After the game, ESPN’s David Newton explained that McCown was confident Norman would bite on an underneath route, because he did so to help defend a pass to Marques Colston two plays earlier. That aggressiveness has frustrated Rivera in the past, leading to Norman’s benching in his second season, but by picking his spots more carefully this season, Norman has created some big plays.4 He entered the year with four career takeaways, and he has already added three more through three weeks. In the season opener, Norman delivered a right hook to knock the ball out of Allen Hurns’s arms, a move that would make new teammate Charles Tillman proud; later, he nonchalantly jumped a quick out for a pick-six.

A fifth-round draft pick out of Coastal Carolina in 2012, Norman is in the last year of his rookie deal, and his head-turning play this September will make him a hot commodity in the free-agent market if Carolina doesn’t reach an extension. It’s clear how important he is to the team: On passes thrown between the numbers, the Panthers are statistically a slightly above-average defense; on passes thrown outside the numbers, they are among the NFL’s top three in completion percentage, yards per attempt, passer rating, and QBR.

Beyond the emerging star in the secondary, the linebacking corps has remained rock-solid in the absence of Kuechly, who missed practice this week and likely won’t return until after the team’s Week 5 bye. A.J. Klein has been a reasonable facsimile of Kuechly — he can’t replicate the sideline-to-sideline range, but he does have a nose for the football — and first-round pick Shaq Thompson has looked fluid, notably making a big fourth-down tackle against Houston. Most impressively, Thomas Davis continues to defy all reason after returning from three ACL repairs in the same knee; against the Saints, he weaved through traffic before knocking Khiry Robinson off his feet with a thunderclap of a tackle.

Of course, Carolina’s hot start isn’t guaranteed to continue. The two-month-long loss of Johnson will be a challenge, even with Allen’s arrival, and the Panthers have had the good fortune of facing weak quarterbacks. Beating Blake Bortles, Ryan Mallett, and the other McCown isn’t the stiffest challenge, and after Sunday’s game against rookie Tampa Bay quarterback Jameis Winston, the difficulty level increases. The Panthers must face the Seahawks, Colts, and Packers before two December games against the historically great Julio Jones and the currently undefeated Atlanta squad that will have major tiebreaker implications in the NFC South.

Newton deserves credit for carrying a barren offense whose starting wide receivers are Ted Ginn Jr. and Philly Brown, but Carolina’s hopes for the playoffs don’t rest in his hands. During Newton’s tenure, the Panthers defense has finished 27th, 18th, second, and 21st in points allowed, and it doesn’t take Superman to guess which one of those was Carolina’s lone winning season.

The Worst Plays in NFL History