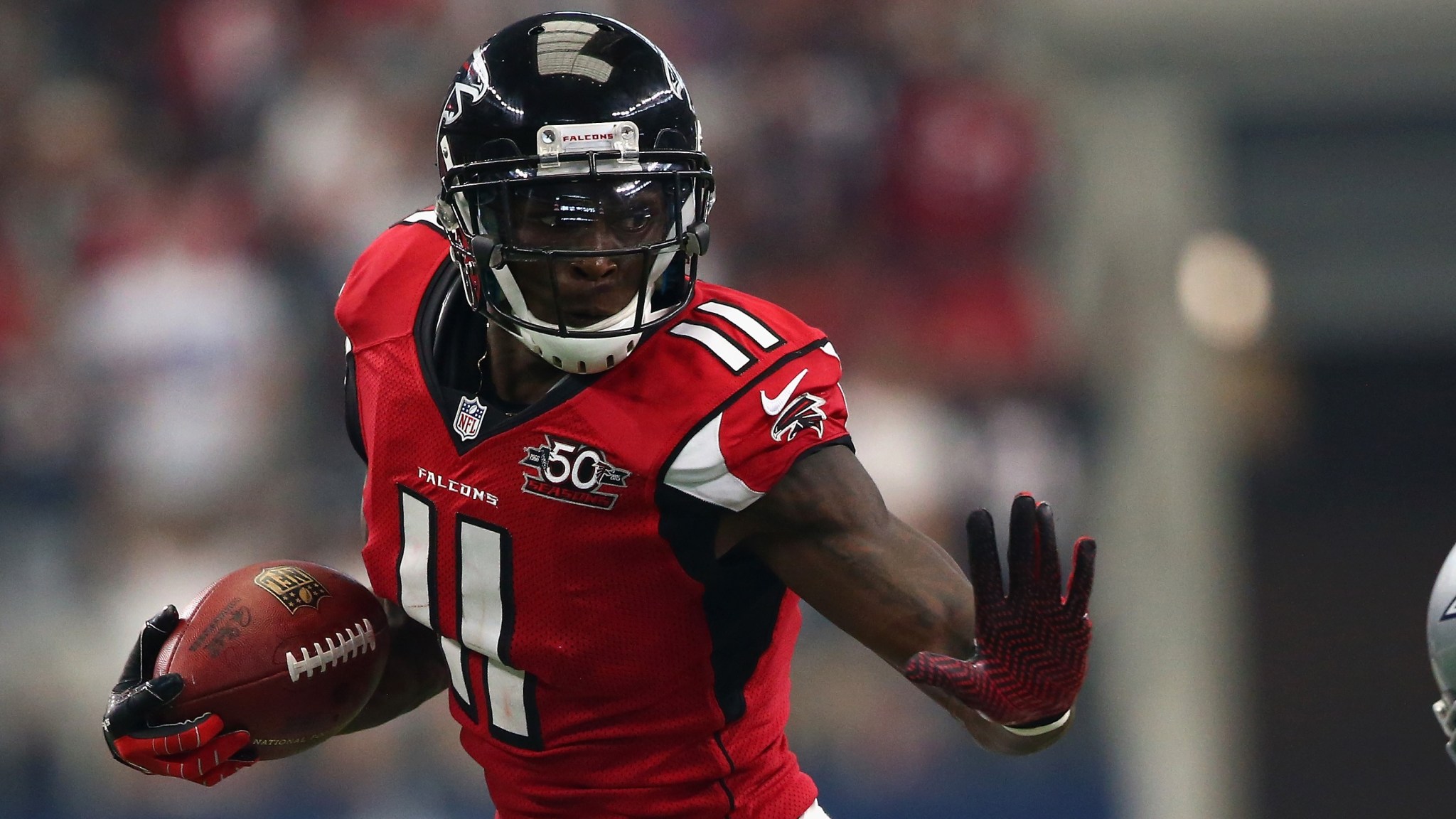 You don’t need me to tell you that Julio Jones is ridiculous, but I’m going to anyway. Through three games, Jones’s numbers in Kyle Shanahan’s offensive scheme have been ridiculous. He leads the league in receptions (34) and receiving yards (440), having posted three consecutive games with at least 135 yards to start the season. Jones would tie a league record1 if he posted a fourth consecutive game with at least 135 yards, and it wouldn’t be the only record he’s approaching. Jones hasn’t simply been the best receiver in football through this season-opening three-game stretch; he’s started what looks like it could become one of the great seasons by a receiver in NFL history.

Let’s start with the simple stuff. If Jones can stay healthy and maintain this level of production, his stats prorate to astronomical, stratospheric season-ending numbers. He would finish 2015 with 181 catches on 245 targets for 2,347 receiving yards. Those would comfortably be records in each of those categories.2 He’s on pace for 21 receiving touchdowns, which would be the third-highest single-season figure in league history behind Randy Moss’s 2007 and Jerry Rice’s 1987 campaigns.

Taken on a per-game basis, Jones’s numbers are equally nuts. He’s averaging 146.7 receiving yards per game. Antonio Brown is right behind him at 145.3 yards per game, a figure that will likely fall as Ben Roethlisberger is replaced by Michael Vick. The league record is the 129.0-yard mark set by Wes Chandler during the 1982 strike season. Over a 16-game season, nobody has topped Calvin Johnson’s 122.8-yard average from 2012. Put it this way: You remember that freakish nine-game stretch from Odell Beckham Jr. last season? That was 133.2 receiving yards per game. Jones has been 10 percent better than ODB was during one of the hottest stretches a wide receiver has ever exhibited.

I’m not done. In the context of his team, Jones has also been remarkable. With Roddy White not the option he once was and Devin Hester injured, Jones has dominated the Atlanta passing attack. (To be fair, he very well may have had an equally large share if those guys were healthy.) Through the first three weeks, Jones has been targeted on 40 percent of Matt Ryan’s passes. Again, with the limited target data available going back to the mid-’90s, I can’t find anyone who tops that figure.

Jones has 44.1 percent of his team’s receptions through three games, having caught 34 of Ryan’s 77 completed passes. Nobody comes close to that figure, with Tim Brown catching 35.4 percent of Oakland’s passes to set the league mark during a dismal 1997 season for the Raiders. Ryan’s next 17 completions could go to other players, and Jones would still be setting a league mark. And Jones has an unreal 46.5 percent of his team’s receiving yards, a figure that tops Brandon Marshall’s 2012 campaign, when he picked up 1,508 of Chicago’s 3,298 receiving yards, good for 45.7 percent of its receiving output.

Hold on, I’m still not done with superlatives. Since 2007, ESPN Stats & Information has tracked the number of routes run by each receiver. We can use receptions per routes run as a measure of how frequently a player is targeted with the football on a per-play basis. Over that time frame, among receivers with 100 routes or more, the record for receptions per route belongs to Wes Welker in 2009, when he caught passes on 27.8 percent of his routes. Jones is at 30.9 percent through three games. He is being fed the football more than anybody else in nearly a decade, if not longer.

Maybe it’s unfair to extrapolate three-game performances out to a 16-game season. Let’s put Jones’s numbers in context one more way, by comparing him to how other receivers have started over the first three games. You won’t believe me when I tell you that his numbers are still great:

What Jones is doing is historic. And even better, there’s little reason to think that he’ll let up.

Watching Jones’s tape from the past three weeks reveals how Shanahan has basically turned him into a supersize Antonio Brown. Jones is moving around the formation and being used at all levels of the passing game. You don’t need me to explain what Jones can do as a downfield weapon, but Shanahan has taken advantage of having a truly dominant wideout for the first time since he had Andre Johnson in Houston by using Jones closer to the line of scrimmage, too.

It’s clear Shanahan has given Ryan the freedom to audible out of whatever play he’s called at the line of scrimmage and throw a hot route to Jones whenever he’s left uncovered. Watch here from the first quarter of the game against the Giants, when the offensive line clearly blocks for a run, but, with Jones’s man blitzing off the edge, Ryan instead throws a quick hitch to Jones (before being blasted by a second free blitzer):

Jones goes for 12 there. A couple of plays later, the Falcons pulled the same move to the other side of the field, with a quick throw to an uncovered Jones in the slot for another first down:

And a third from the Cowboys game, where Jones picks up a first down on a slant against Brandon Carr:

And an identical-looking slant from the slot from the Eagles game in Week 1:

These are simple versions of packaged plays, where Ryan has a run play called (watch the offensive linemen blocking upfield) and the option to immediately make a safe throw to Jones. Ryan has attempted 23 passes to Jones within 5 yards of the line of scrimmage this year, completing 17 for 120 yards. Devonta Freeman may have had a nice day against the Cowboys on the ground Sunday, but Atlanta is almost always going to get more yards throwing hitches and slants to Jones than it will pounding the rock behind an oft-struggling offensive line.

The Giants eventually adapted and stuck their cornerbacks on the line of scrimmage against Jones as the game went along … and when they sent a big blitz late in the game, they had Prince Amukamara right up on Jones, who promptly shook him at the line and ran past for the game-winning touchdown.

On Sunday, the Cowboys learned from the Giants’ early mistakes. They stuck bracket coverage on Jones on most of the plays I saw, with a cornerback up on the line of scrimmage and safety help over the top. The Falcons adapted. Corners are still terrified of Jones’s agility in and out of his breaks and can’t get around his size, so the Falcons adjusted by throwing quick hitches and back-shoulder throws to Jones for steady yardage. They moved him into the slot to get him more matchups against nickel corner Tyler Patmon, who was the primary defender in coverage on Jones’s 45-yard touchdown. It didn’t help when deep safety J.J. Wilcox whiffed on the tackle attempt.

The Falcons also use their other receivers to create space and separation for Jones, which seems unfair. Here, in a crucial third-and-short late in the game against the Cowboys, Jones lines up in front of Leonard Hankerson in a two-wideout stack but then releases to the outside to draw Morris Claiborne in coverage. Hankerson clears out the interior defender with his corner route, and when Jones cuts his flat route back inside, Claiborne has no chance of holding up, leaving an easy first down:

Cruelly, they finished the Cowboys off with something totally different. The Falcons brought Jones and White together in a similar-looking stack, with Jones as the trailing receiver this time. Atlanta went with play-action and had White basically block Carr for a second while Jones dragged across the formation behind the line of scrimmage. The Falcons counted on the Cowboys playing man coverage and nobody else besides Carr accounting for Jones as he got lost in the shuffle, and that’s exactly what happened. Claiborne strangely decided to stay at home as both Jones and White ended up wide open for an easy touchdown:

Here’s the problem: There is no easy solution to stopping this stuff. You can’t stop Jones with a single cornerback on the line of scrimmage, even if he’s physical, as you saw when Jones torched Byron Maxwell in Week 1 and beat Amukamara for the game winner in Week 2. You can’t bracket him, like the Cowboys did, because he’s still going to make short catches when Ryan throws him back-shoulder passes and longer ones when the Falcons go with play-action and get him across the field on dig routes. Oh, and with a safety 15 yards away from the play who is unable to key on the offensive line’s motion for the play call, Atlanta is subsequently going to have a numbers advantage running the football, as it did while gashing the Cowboys.

As long as (find a piece of wood to knock on right now) Jones continues to stay healthy, there’s little reason to think he can’t keep this up. Even if simple variance suggests he won’t average 146.7 receiving yards per game, he’s going to get the ball as much as anybody in football and in situations where he can make plays after the catch. With apologies to Brown, who may drop out of the running solely because of Vick, Jones is the best receiver in football right now. And as the Falcons have expanded his role and made him the absolute focal point of an offense that’s averaging a Ryan-era-high 29.7 points per game, they’ve been rewarded with historic production and a 3-0 start to the season.

'Jalen and Jacoby': NFL Week 3, Papelbon vs. Harper, and More