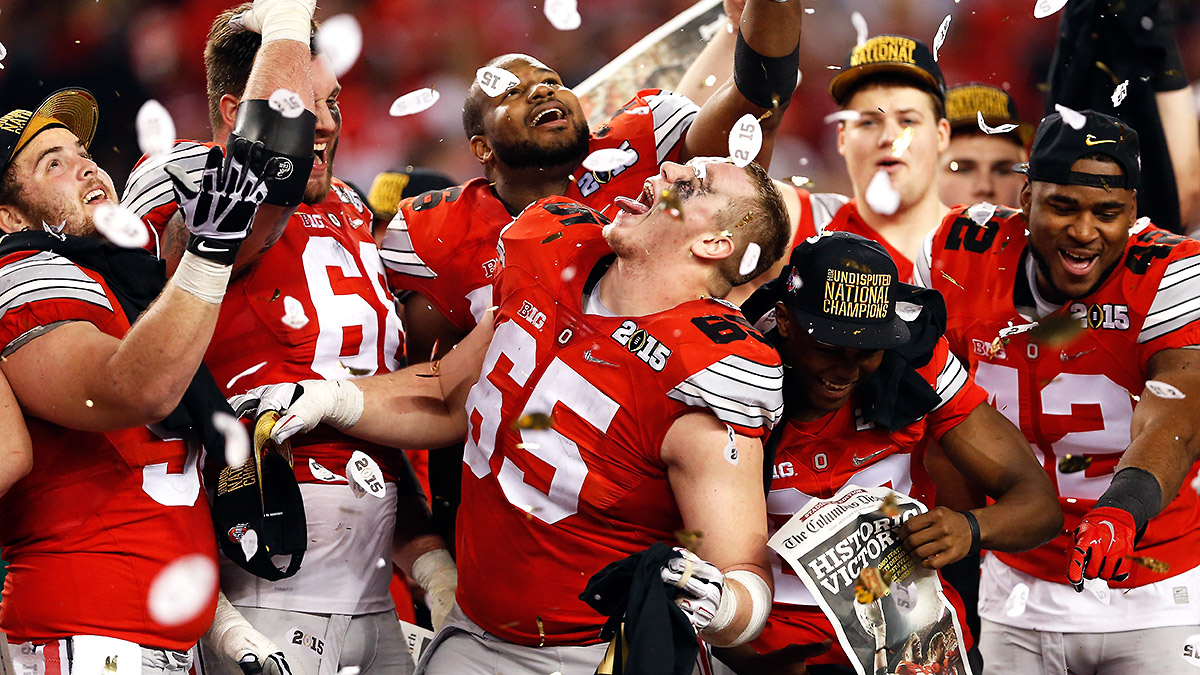 College football serves and is served by many gods, old and new. Here, week after week, we’ll build a temple to them, installing saints and erecting graven idols as we go. The temple is made of words and pictures from the Internet. Just go with it. Today: We toast Ohio State’s 42-20 title-clinching win over Oregon and play a little feelingsball with the runner-up.

Celestial Recalibration of the Week: And Yea, the Seventh Seal Was Opened, and It Said “TCU’s Got Next”

In the immediate aftermath of the Rose Bowl, we did some grateful pondering over how very differently this season might have turned out if not for the advent of the playoff system. Neither of Monday night’s combatants would have been in the championship game in a universe still operating under BCS control, and now that the first national title claimant under the playoff is a 4-seed, that gratitude is only ratcheting up. There were no proper underdogs in this final foursome, but the last team standing is the only one that had a legitimate claim going in about being doubted, and isn’t that kind of a great miracle in and of itself? In its first year, this slick contraption managed to make the victors look almost — saints preserve us — scrappy. (Now, about TCU … )

Urban Meyer was quick to praise his defense after the game, and rightly so. This was an all-hands win, from which one of the most enduring images will be defensive end Joey Bosa soothing the trophy to sleep, another will be Darron Lee’s general disregard for the laws of matter, and still another will be Bosa’s hit that laid out Marcus Mariota late. Meanwhile, the Buckeyes offensive line, pieced together out of almost entirely inexperienced components this season, deserves its own trophy for Monday night’s outing — one made entirely of raw beef and corn nuts.

But ye gods, the pairing of Cardale Jones and Ezekiel Elliott outstripped everything else that happened, emotionally speaking, on and off the field. Seen side by side on the JerryTron while taking their postgame questions, they looked like The Buckeyes That Ate Tokyo; during the game, both players appeared capable of leveling actual metropolises and eager to bruise themselves in the attempt. We have carried a not-inconsiderable torch for Jones since his “ain’t come to play SCHOOL” introduction to the general public; his ascendancy to the QB1 slot coupled with Elliott’s late-season blossoming lends OSU an offensive tandem that would seem equally at home squealing over a festive game of Mario Kart while clutching juice boxes as laying waste to a seaport with its bare hands.

One is an erstwhile third-string quarterback who bullied past Oregon’s nose guard on third down and made merry cannonballs on hard turf on fourth down … in the national title game … which also happened to be his third collegiate start; the other is the guy who spent the game getting hurled at the opposing line on pretty much the exact same play what felt like a dozen times, to repeated successes, and then spent the postgame eating confetti out of the air. We are f’ing enraptured.

Previously: “With Urban Meyer and OC Tom Herman coaxing 12 wins out of an offense that lost two starting quarterbacks since the preseason? With defensive coaches Luke Fickell, Larry Johnson, and Chris Ash scheming to put the Badgers offense down for a long winter’s nap? We’re staunchly agnostic on the matter of the Big Ten jumping the Big 12 into the playoffs, but now that we know the Buckeyes are who we get? This is gonna be so good.” Now: 2015 Houston football gets curiously compelling with new coach Herman officially off Buckeye patrol, and we start poring over Ohio State’s expansive list of returning starters for next year. The possibilities are loooofty. It’s January 13, and the Buckeyes’ returning coaching staff and players have already made the wait between now and September 7 interminable. 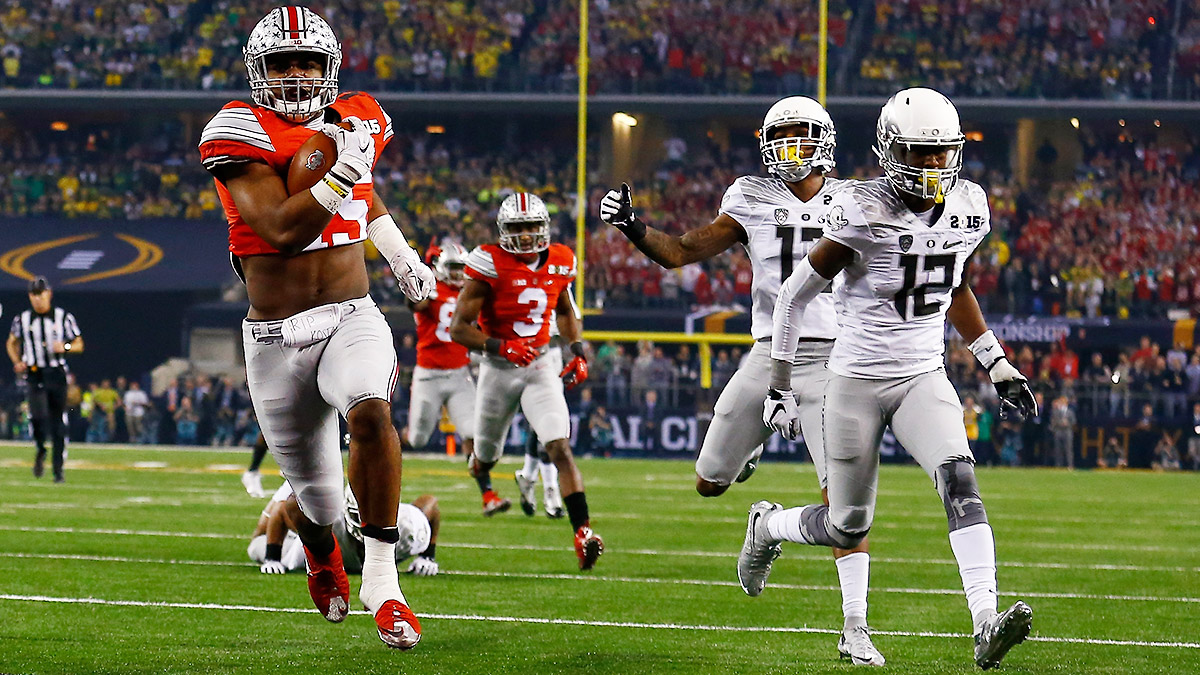 You shall know him by the trail of demolished would-be tacklers, and also by his navel, which goes everywhere he goes, bouncing serenely, unhindered by any sort of cumbersome fabrics. Honorable mention graven idol, hypothetical edition: A personal pan pizza, lukewarm, with a smiley face on it made out of pepperoni.

This memorial stands to mark the spot on which you tried super hard and watched it blow right the hell up.

You would think a game that began with Oregon’s mascot reduced to taking the field on foot and Ohio State’s cheerleaders coming up a flag short in a jaunty O-H-I greeting would set a high bar for clowning, but that’s what you get for thinking. Even amid all this slick and wretched excess, our beautiful dumb game abides.

It’s a lot funnier now that it didn’t end up making the difference in the game, but given the eerie similarity between the outlandish fumbles made by Jones and Jameis Winston, it’s worth launching a robust national discussion over whether the third quarter of the College Football Playoff, as a whole, is haunted.

“I never thought I would slip and throw the ball backwards.” — Jameis, with really the only possible response to that moment

"What happened?" "The ball fell out of my hand." Cardale Jones is, like, one of my 10 favorite people on earth at this point.

Oregon, the beneficiary of most of the evening’s forty-eleven turnovers, was not immune to near disaster in the ball control department:

If this seems vaguely familiar, it’s because you just watched Oregon do some would-be role reversal on this immaculate piece of theater from November’s game against Utah. And if this looks really familiar even for a guy in an Oregon uniform that says MARSHALL on the back, well.

Maybe it’s time to start teaching in the opposite direction here. Maybe instead of allowing players to spike the ball or pitch it into the stands or drop it before it even gets the chance to bloom into a touchdown ball, we should teach our nation’s youth to give it a quick hug and a pat once it’s safely into the paint, and thank it for its service. Maybe we should coat it with toad-derived hallucinogens and allow scoring players one ceremonial lick upon successful completion of a score. Just spitballing here.

This guy has stuck with us since rocketing to stardom, and tonight, we’re letting him sing us off:

Hold on to that feeling, brothers and sisters, and to whatever manner of stuffed animal you choose to employ as a microphone. See you back, same time next year.

‘The Grantland NFL Podcast’: Peyton Manning’s Future and the Rest of the Divisional Playoff Action