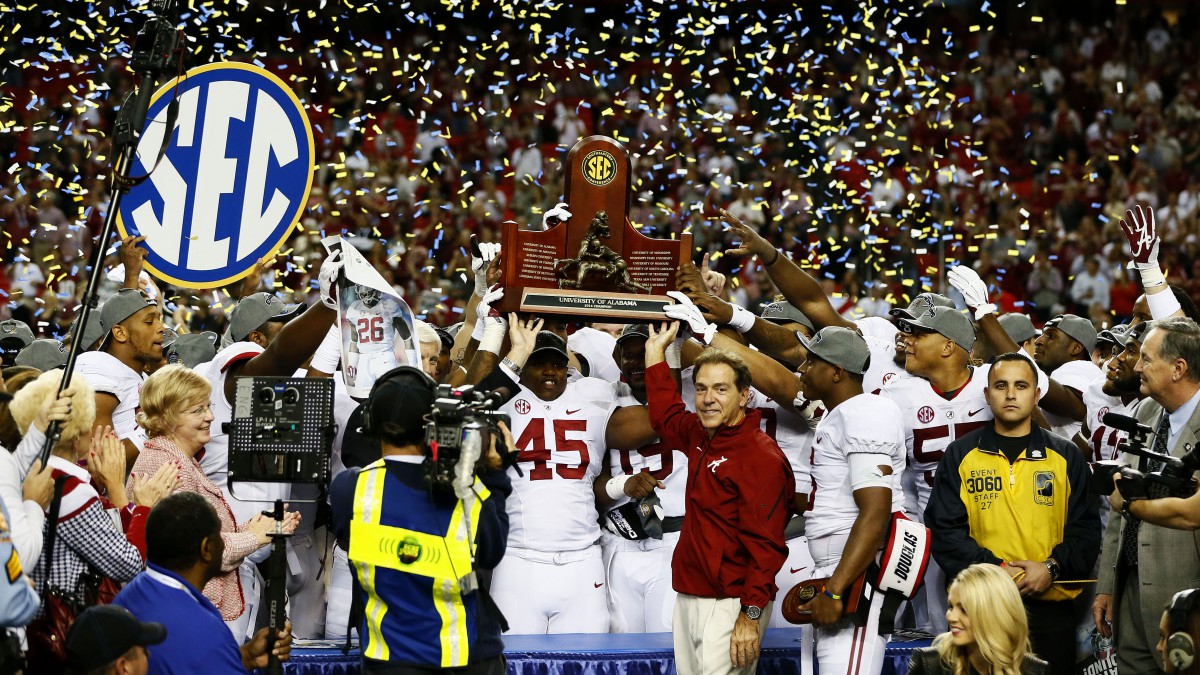 When the game was out of hand, when it was Derrick Henry time down the stretch, and Alabama was giving Missouri a rousing send-off in the general direction of the Citrus Bowl, it was time to reflect for a bit on two matters that had been bothering me for most of the SEC’s championship game.

First, I always will enjoy the irony of an Alabama football program that takes as its rock-and-roll rouser a song that explains how in Birmingham they love the guv-nor, even though, if the guv’nor in question had had his way, Blake Sims and Amari Cooper and T.J. Yeldon and Derrick Henry never would have stepped onto campus. We all do what we can do, I guess.

Second, holy houndstooth, isn’t that Lane Kiffin down on the Alabama sideline? Lane Kiffin, who was the second-to-last crazy thing Al Davis did as owner of the Oakland Raiders, the last being saddling Kiffin with JaMarcus Russell as a first-round draft pick? Lane Kiffin, who moved along to Tennessee, where he went all Edward Snowden on Urban Meyer and Florida, blowing the whistle and whatever goodwill he had within the SEC before he’d ever coached a game in Knoxville, and who coached one season before beating feet to Southern California, a move that so endeared him to the Tennessee student body that they greeted the news by rioting? Lane Kiffin, who was pulled off the team bus by USC athletic director Pat Haden and fired at the airport after returning from a loss at Arizona State. So, there he was, down there on the sideline in the second quarter, celebrating what would become a 58-yard touchdown pass from Blake Sims to DeAndrew White while the ball was still in the air. Yeah, turns out it was him. Lane Kiffin has lived in interesting times, he has. He is the offensive coordinator on a team with an offense that is becoming frighteningly efficient.

Kiffin had Sims running through the entire coded syllabus of the Alabama offense, and nearly everything worked. The plays that sound like a Thursday-night special at Olive Garden — GL LT 47 STROMBOLI! — worked. So did the ones that sounded like artillery coordinates (NEAR LT WING OX 33 PETER QUAD!), the ones that sounded like they came from Home Depot (9 HEX RUST SAW SMASH X-PIPE H-UNDER!), the ones that appear to be offshoots of the Yakuza (TRAIN LT Z-BACK 43 GUT GHOST!), and the ones (DUAL RT JILL Z-SPANK SMASH!) that sounded like something for which you’d have to pay double at a gentlemen’s club in Laughlin, Nevada. It reads like gibberish, but it played like poetry, especially for Sims, who began the season with everyone doubting him and is ending it as a splendidly mature quarterback.

“Back in high school,” Sims said, “I played here my last game in the championship, and we lost. Pretty much I was just playing for everybody down the road in Gainesville High. And just pretty much just going out playing, doing everything that Coach Saban has taught me and Coach Kiffin has taught me, and just trust my players that they’re going to play [their] hearts out and leave no regrets on the field.”

Your thoughts do wander, though, as they’re loading up the confetti cannons, and the score gets to 42-13, and somebody hands Nick Saban the conference championship trophy and Blake Sims the MVP hardware. An upside-down, inside-out, who’s-the-sucker-this-week regular season in the SEC winds up in the most predictable way possible — with Alabama atop the conference and as the no. 1 seed in the extended ATM withdrawal that is the first college playoff. Before we get to what happened in the Georgia Dome, we should deal with the committee’s decisions on Sunday, which left Baylor and TCU out in the cold, and in Waco and Fort Worth, which is worse. There seems little question that, when everything was equal, and despite their fervent assertions that arranging a meeting between Saban and Urban Meyer was completely accidental, the committee went for brand names, and TCU and Baylor don’t jump off the shelves the way Ohio State does. TCU and Baylor are going to find out what 17-10 college basketball teams have known for decades now: Once the Tide and Buckeyes kick off in the Sugar Bowl, nobody’s going to remember who Baylor is or why TCU was so damned upset. These are the fundamental dynamics of a playoff system. Curiously, Saban seemed to realize it, too. He seemed a bit, well, wistful, or as wistful as Nick Saban is likely to get — even though, at one point after the game, he told everyone how much he loved the media, and neither his tongue nor his pants ignited.

“And everybody sat on New Year’s Day and watched how many games that were all important? Those games are not getting the same respect now because we have a Final Four, and that’s all that anybody talks about, is who’s in the Final Four. I couldn’t get them to talk about the game today.”

And, yes, nostalgia can come easily when you’re just as likely to win in the new format as you were to win in the old one. But Saban touched on something fundamental that has changed in college football this year. On Saturday evening, Alabama played a glorious football game. All the Strombolis and the Rust Saw X-Pipes and the ol’ Spank ’n’ Smashes worked exactly as they should have. And, by the time the Georgia Dome cleared out, none of it mattered a damn. But some of it should, maybe for a little while longer, anyway. 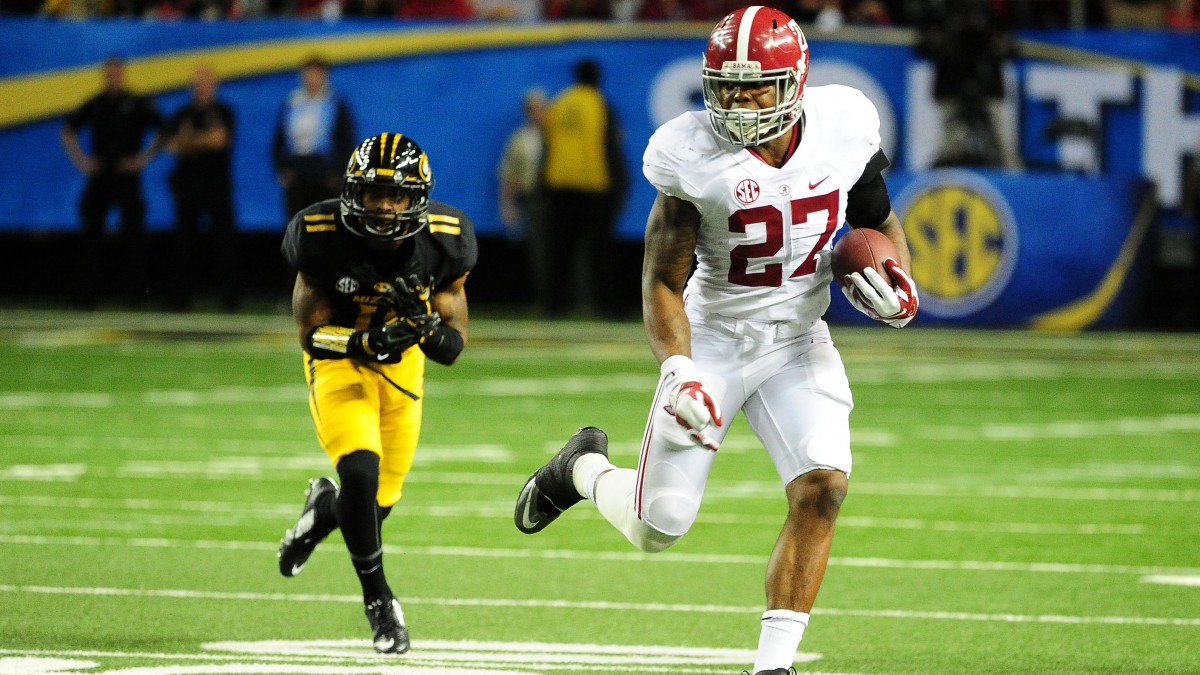 Derrick Henry is a heavy load of substance behind an arsenal of flash. At 6-3 and 241 pounds, he has an inch and 20 pounds on his more celebrated teammate at running back, T.J. Yeldon. Henry isn’t clearly the best player in the country at his position, the way receiver Amari Cooper is. (If anyone else gets a vote for the Heisman Trophy, it’s the worst plebiscite since the last one they held in North Korea.) He’s not a wonderful redemption story, like the one they tell about Blake Sims, who sat behind AJ McCarron for a couple of years and then watched them bring in Jake Coker from Florida State, forcing Sims essentially into an audition for his current role. The flash is what pulls in the publicity. The flash is what pulls in the points. Derrick Henry is what puts the game away. He is the head Stromboli, the sharpest Rust Saw, the most elusive Gut Ghost there is.

He came in as the leading rusher in the history of high school football, having gained more than 11,000 yards in his career at Yulee High in Florida. He scored twice in a Sugar Bowl loss to Oklahoma last January, but he was largely obscured this year by Sims’s struggles early on, and by the incandescent play of some of his other teammates. On Saturday, however, they gave him the ball and told him to put the game away.

“You just have to trust the process,” said Henry, and Nick Saban’s lips did not even move as Henry spoke. “You have to make the most of your opportunities, like coach tells us, trust the process, trust what you’re being coached to do, and go out and execute.”

He carried the ball 20 times and gained 141 yards, 102 of them in the second half. He ultimately created the rout that the game became by blowing through the right side of the line from 26 yards out with 7:38 remaining to put Alabama ahead, 35-13, and then he scored again four minutes later, busting over from the 1-yard line. This was about when they started loading those confetti cannons and preparing for the louder exercises to come.

“The whole game,” Henry said, “we knew the only thing that could stop us was us. All I had to do was execute the play that was called. We just take each step as it comes. We just want to enjoy this win and be prepared for what’s to come, but I’m just glad we got this one.

“We got a 24-hour rule. We have 24 hours before we move on to the next thing. Right now, just happy we got this one.”

It’s been more than 48 hours now. The Stromboli is in the oven, and the Rust Saws are being sharpened again, and the Gut Ghosts do walk upon the parapets, in the general direction of New Orleans, and the Sugar Bowl, and Ohio State, whose presence in the new four-team hootenanny has caused all the agita down in Waco and in Fort Worth. There’s a 24-hour rule on that one, too. People already have forgotten every team except four of them, and Alabama is one of those, and a season full of surprises turns out to have been no surprise at all.