College Football Clip Show: No. 2 Oregon’s Path to the Playoff 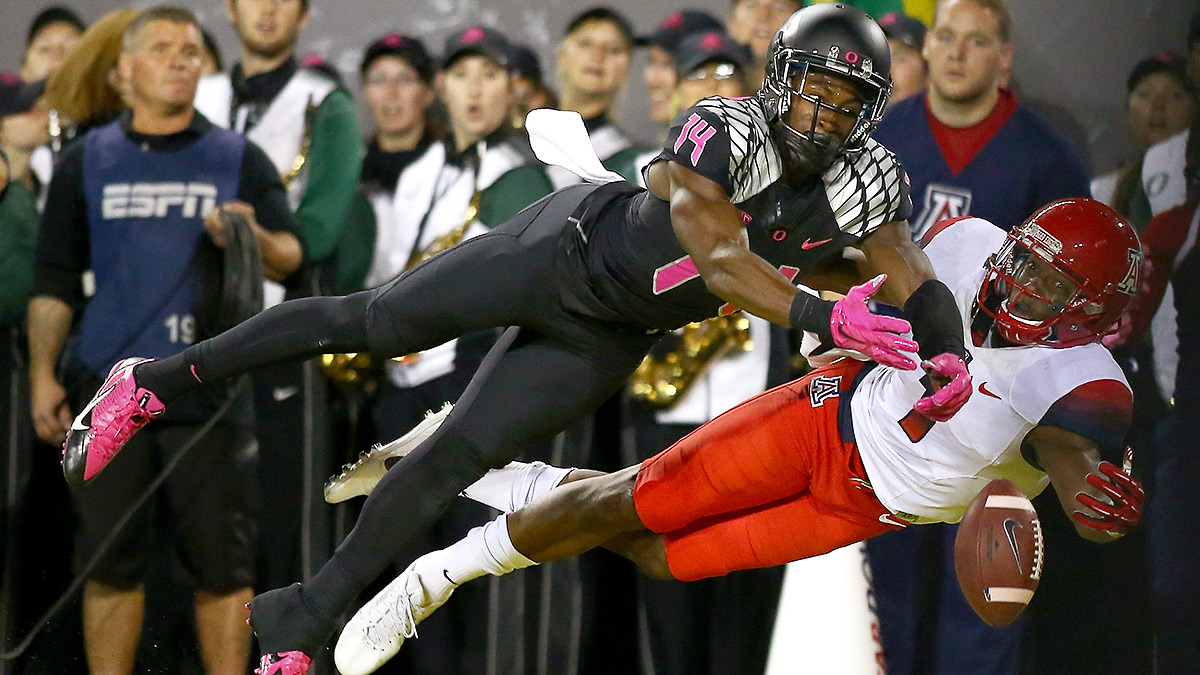 And then there were four! We’ve come at last to our first College Football Playoff, and not one team in this inaugural cluster made it through to the semis without giving its fans occasional vapors. Here, we trace each squad’s journey (previously: Alabama), remembering the good times and the times when their nemeses got to make Duck Hunt jokes at their expense.

For all the redolent-of-2007 antics we catalogued throughout the season, for all the teams that came and went and dumbed down and smartened up, the current rankings sure do look a lot like the preseason rankings. Four of the five top-rated teams in the preseason AP poll earned playoff bids, including Oregon, which opened at no. 3 in the preseason AP poll and now sits at no. 2 in the final College Football Playoff ranking. In the intervening weeks, Oregon did some dancing down and back up the polls, but never dropped enough to really tumble out of the national conversation. It’s one of the more interesting elements of the season we just went through: For all of the wacky harbingers spotted along the way, the year sure is poised to end in a cluster of inevitabilities.

What 2013 was, injury-wise, for Georgia’s offensive skill players, 2014 has been for Oregon’s offensive line. Back in August, when we were previewing the Pac-12, we had to duck in at the last minute to add an update on injured left tackle Tyler Johnstone, and the unit’s health meter ticked steadily downward from there. By the time Thanksgiving week rolled around, six additional O-liners had missed playing time — most of them multiple games, and all of them with leg ailments.

It’s football’s rendition of It Is What It Is and deserves all attendant scorn, but Oregon has had some real standout tale-of-two-halves action this season. We saw the Ducks in person twice in 2014, and both games featured substantial turnarounds of sorts. The second instance we’ll get to in a minute; the first was Week 2 with Michigan State in Eugene, where the Ducks dicked around1 for a half and some before pouring a bucket of points on the Spartans. Oregon’s offense gets ink by the barrel, and with good reason, but the moments that stay with us months later are the defense’s interceptions of Connor Cook, with Erick Dargan executing what looked like a triple salchow to pull one ball down and Ifo Ekpre-Olomu making this majestic dive:

What was more unexpected than that Arizona upset of Oregon in 2013? Another one in 2014, this time in Eugene.

That wasn’t a lot of time to spend on Oregon’s bleakest moment, was it? Hang on, here’s another tale of two halves: Two months after falling 31-24 to the Wildcats at home, the Ducks entered the sterile confines of Levi’s Stadium and atomized any argument against their inclusion in college football’s first playoff with a 51-13 league championship victory. It was Marcus Mariota’s final on-field performance before what we assume will be a runaway Heisman victory this weekend, but again, we can’t talk about this game without throwing all kinds of love to that Ducks defense.

Is this an Oregon team prepared at last to live up to the program’s resources and potential? Are we in for that long-desired but denied Ducks-Tide matchup at last? For Oregon, only Florida State stands in the way, on the green grass of the Rose Bowl, where the Ducks will enjoy greater home-field advantage but where things worked out pretty swell for the Noles last time.

Blown Up on the Bayou: How the Saints Ended Up in Salary-Cap Hell