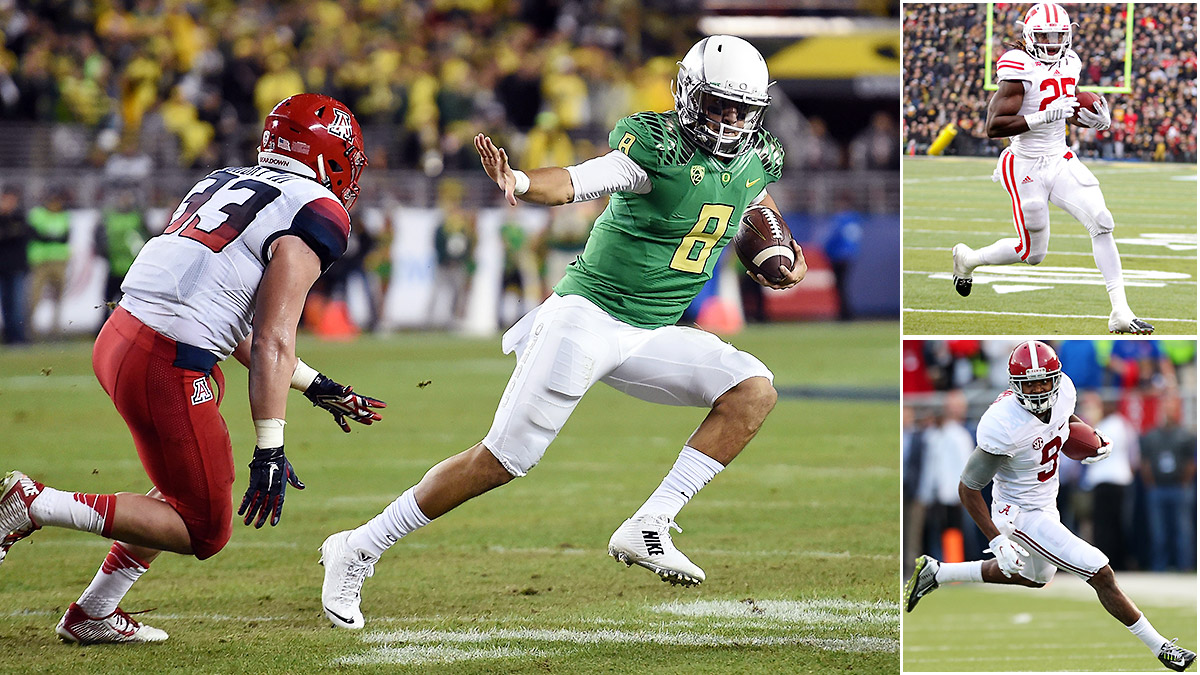 The Heisman field has officially been whittled down to three: Oregon quarterback Marcus Mariota, Wisconsin running back Melvin Gordon, and Alabama wide receiver Amari Cooper are the 2014 finalists, and will head to New York for Saturday’s ceremony. We pretty much already know who will win, but who should win? And how will the race for second place shake out? We’ll explore that and more in the final edition of this season’s Heisman Watch. Oh, and thanks for traveling with us this season. Yes, even you, aggrieved Dak Prescott fans.

Mariota will almost certainly hoist the Heisman Trophy on Saturday night, becoming the first Oregon player in the award’s 79-year history to do so. Impressively, he didn’t even need a tacky Manhattan billboard to pull it off! 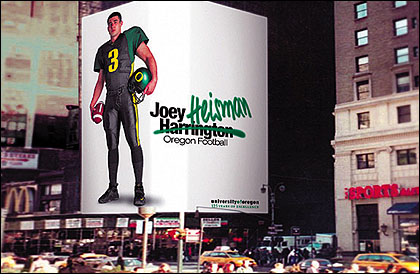 Mariota’s inevitable win will mark a departure from two recent Heisman trends: the perhaps aberrational lean toward freshmen (which led yours truly and many others to pick LSU’s Leonard Fournette back in August) and the propensity for preseason favorites to fall off fast after being held to an unreasonable standard (looking at you, Andrew Luck).

Mariota is a junior, and he was one of the preseason favorites, but he managed to buck those trends thanks to three other factors working in his favor:

1. Quarterbacks enjoy a sizable built-in advantage among Heisman voters, and Mariota entered the season as the position’s most viable candidate. That was mostly due to his past performance, partly due to Braxton Miller’s season-ending shoulder injury, and partly due to Jameis Winston’s candidacy seeming doomed amid continuous off-field issues and the historic odds stacked against past winners.1

2. Oregon’s offense is the best possible showcase for a quarterback with Heisman aspirations. Think about how much less prolific and entertaining Mariota would be if he played in, say, Alabama’s offense (well, at least the pre–Lane Kiffin Alabama offense),2 and then write Mark Helfrich a thank-you note for maximizing Mariota’s skill set.

3. Oregon was ranked no. 3 in the preseason AP poll and finished no. 2 in the final selection committee ranking. Plenty of quarterbacks posted good numbers this season, but few enjoyed as much teamwide success as Mariota, and few were surrounded by as many elite teammates. Mariota’s ability to put the ball in the hands of playmakers as athletic as he is undoubtedly helped his Heisman campaign.

Of course, there’s one more factor: He was outstanding almost all season long, throwing 38 touchdowns to just two interceptions while completing nearly 70 percent of his passes, averaging more than 10 yards per attempt, and leading the FBS in passer rating (186.3). To that, he added 669 rushing yards and 14 rushing scores, and tossed in a receiving touchdown for good measure. He finished fourth nationally in total offense against FBS opponents.

In truth, the only strange thing about Mariota’s regular season is that it went almost exactly according to plan. Even the one slip-up — Oregon’s 31-24 October loss to Arizona, in which Mariota performed rather unremarkably — is moot after Friday’s 51-13 shellacking of those same Wildcats in the Pac-12 championship game, which cemented Oregon’s spot in the College Football Playoff. That mulligan made Mariota’s Heisman candidacy nearly unimpeachable, leaving the only real drama as whether he’ll break Troy Smith’s record for first-place votes, which stands at 86 percent. If he does, he’ll have earned it.

All of Grantland’s Heisman Trophy goodness
If I had a vote, I’d give Cooper the nod at no. 2, but Gordon will likely finish second because Heisman voters tend to favor running backs over receivers. Not that Gordon earning the two-spot will be any grave injustice: He led the FBS in rushing yards (2,336) and rushing touchdowns (26) this season, and though he wasn’t head and shoulders above every other running back in the nation in terms of overall dominance, he was when it came to production.

However, Gordon’s stock took a hit in the Big Ten championship game, when he was held to 76 yards on 26 carries, good for 2.9-yard average that was downright paltry for a guy who averaged 7.6 on the year. The uncharacteristically mediocre performance destroyed any chance Gordon had of upsetting Mariota and claiming the trophy, while also impeding his quest to break Barry Sanders’s single-season rushing record. But I’ll always remember Gordon for his superhuman, temporarily record-setting outing against Nebraska, and you should, too. Now go watch this GIF for hours on end.

Entering the season, many folks (me included) thought Bama was primed for a relative down year due to wholly legitimate questions about its quarterback situation. What we failed to account for, though, was the sheer unstoppability of Cooper, who makes any quarterback’s job roughly 1,656 times easier — coincidentally the same number of receiving yards he accumulated this year, good for first in the FBS. Cooper also led the nation in receptions with 115, because he is a real-life cheat code. Essentially, Alabama quarterback Blake Sims wound up being the football equivalent of a trust fund baby, and Cooper was his fat pile of dough.

Cooper was clearly the best wideout in college football this season — some would say the best overall player. But as a receiver, he faces a steeper climb than his fellow finalists. Still, he deserves a seat in New York after separating himself this season with unrivaled consistency, hauling in eight or more receptions in all but two games (one an injury-shortened outing). Moreover, he finished the season on a particularly strong note, snagging 13 receptions for 224 yards and three touchdowns in the Iron Bowl and another 12 receptions for 83 yards in Saturday’s SEC championship game versus Missouri. Kiffin became comfortable celebrating Cooper’s touchdowns before the ball had even been thrown, and we can’t blame him.

The New Michigan Men: Caris LeVert and the Pipeline of Unheralded Wolverine Superstars