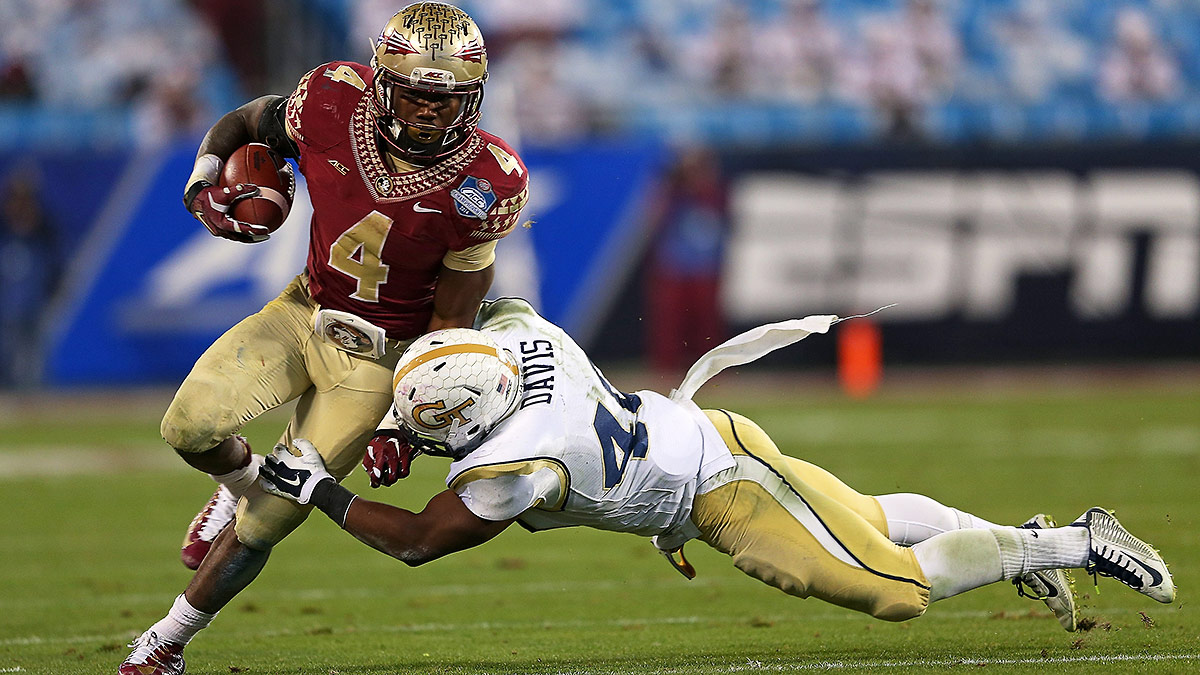 And then there were four! We’ve come at last to our first College Football Playoff, and not one team in this inaugural cluster made it through to the semis without giving its fans occasional vapors. Here, we trace each squad’s journey (previously: Alabama, Oregon), remembering the good times and the times when we actually heard human voices utter the sentence “Does Florida State have a Boston College problem?”

From Pasadena, of course. The last time the Seminoles set foot on Rose Bowl grass, they walked off with the final crystal football and their first national title since 1999. Florida State’s undefeated run in 2013 came by a combined 723 points to 170, good for an average margin of victory of 39.5. Think about that: They won their games last season by an average of more than five touchdowns, and they did it while resting swaths of starters in many fourth quarters. It was really, really something.1 It also made for a particularly exciting title game, so unused had we become to FSU looking hunted on the field.

The effects of luck on systems with massive amounts of moving parts, like football games, is one of our favorite drunk-on-the-porch topics, and we spent a lot of time this offseason talking and thinking about the confluence of luck, circumstances, and gobs of talent that led to such an unsinkable 2013 campaign for FSU. And the one element that stood out to us as being simultaneously the most remarkable and least replicable was the astonishing lack of injuries the Seminoles sustained throughout their championship run.

Sure enough, that particular streak of good fortune failed to hold. But the shifts necessitated by missed time made the Noles a more interesting team to watch this year. Need an example? Look no further than true freshman running back Dalvin Cook, who blossomed late in the season after inheriting more carries and will be FSU’s most hyped returning player in 2015.

This is tricky. The Noles won all of their games this season, extending their victory steak to 29. But they should have won all of their games this season. So when, for example, they knocked off then–no. 22 Clemson in overtime in September, it was compelling television, but it was also what they were supposed to do, and without the overtime, right? The bar they’ve set almost makes their victories, even their close ones, anticlimactic. Is “can’t win for winning” a thing?

The way championship weekend went this year, with blowouts in the Pac-12 and Big Ten and SEC, we were simply grateful to get a competitive conference championship game. ’Preciate it, Jackets.

Here’s a sentence we wrote in August: “Sooner or later, on law of averages alone, this team’s got to have a bad day.” We then proceeded to watch Florida State have a whole bunch of bad days — and emerge with an identical record to the 2013 world-beaters. Another point we kept coming back to this season: The “[Team X] keeps finding ways to win games” characterization can be a backhanded compliment, but the operative word there is “win.” The crucial difference from this point last year is that an extra game stands between FSU and the trophy. No. 2 Oregon awaits, in the Rose Bowl, on New Year’s Day.