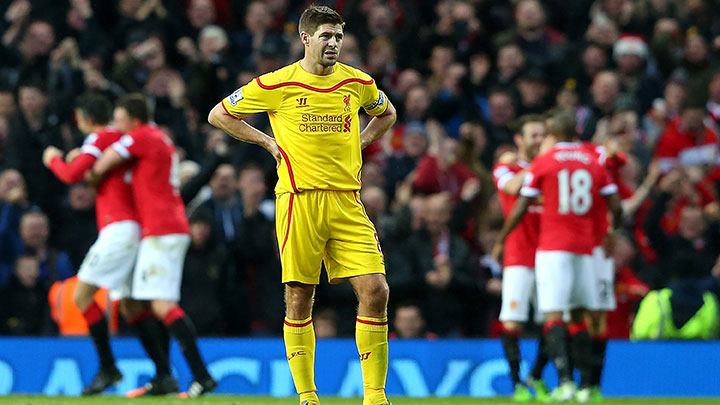 It took Manchester United all of 12 minutes to score against Liverpool.

Goals change games no matter what, obviously, but conceding an early goal on Sunday was a particularly difficult pill for Liverpool to swallow. The Reds were desperately trying to reach some sort of equilibrium after being knocked out of the Champions League, and a match against their biggest rival would’ve been a good place to start.

With rumors swirling as to Brendan Rodgers’s job security, the manager trotted out a three-man defense and Raheem Sterling at the tip of the attack, supported by Adam Lallana. In one respect, the lineup actually worked. After a month of relatively safe but unconvincing attacking performances behind a handful of very conservative lineup choices, Liverpool put in one of their most dynamic shows yet this season, forcing a number of mind-bending saves from the impenetrable force that is David de Gea. But: Most of that work came as the team tried to claw back from that early goal — a goal that was largely a result of the same lineup that revived the attack.

Let’s pick up the play with the ball at the feet of United’s right wingback, Antonio Valencia. 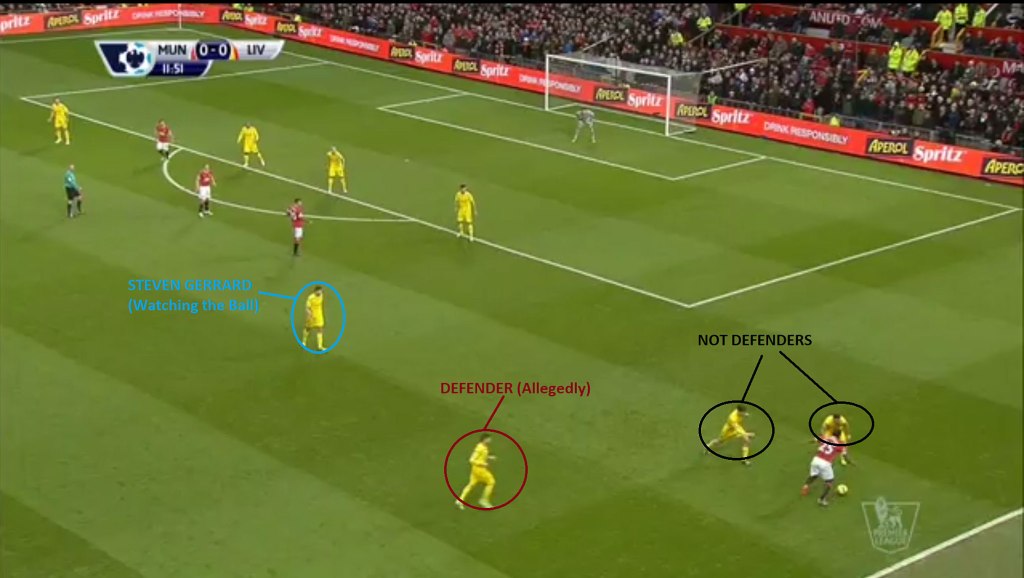 At a glance, things seem relatively nonthreatening. Valencia, who isn’t exactly known for being tricky with the ball at his feet, faces a double-team. And while United do have numbers forward, as Juan Mata has joined the two strikers in the penalty box, Valencia is extremely isolated. For Liverpool, the first problem is that the two bodies defending Valencia are Joe Allen and Lallana, and neither of them are actually defenders. Left wingback Alberto Moreno is sauntering back from an upfield position, so Lallana provides the necessary cover and Allen moves over from central midfield to give cover.1

Allen gets pulled so far wide that it leaves a tremendous amount of space for his central midfield partner, Steven Gerrard, to cover. Gerrard doesn’t seem aware of that problem. He hasn’t dropped deeper to shield the defensive line. Instead, he’s actually upfield from the ball, seemingly unconcerned by a midfield runner (Mata), who currently occupies the back line. He’s not moving to cut off a potential back pass from Valencia, either, which makes his positioning close to completely useless.

Now, when Valencia viciously splits Allen and Lallana — a problem on its own, but one exacerbated by neither of them being defenders — he’s effectively taken four players out of the play. 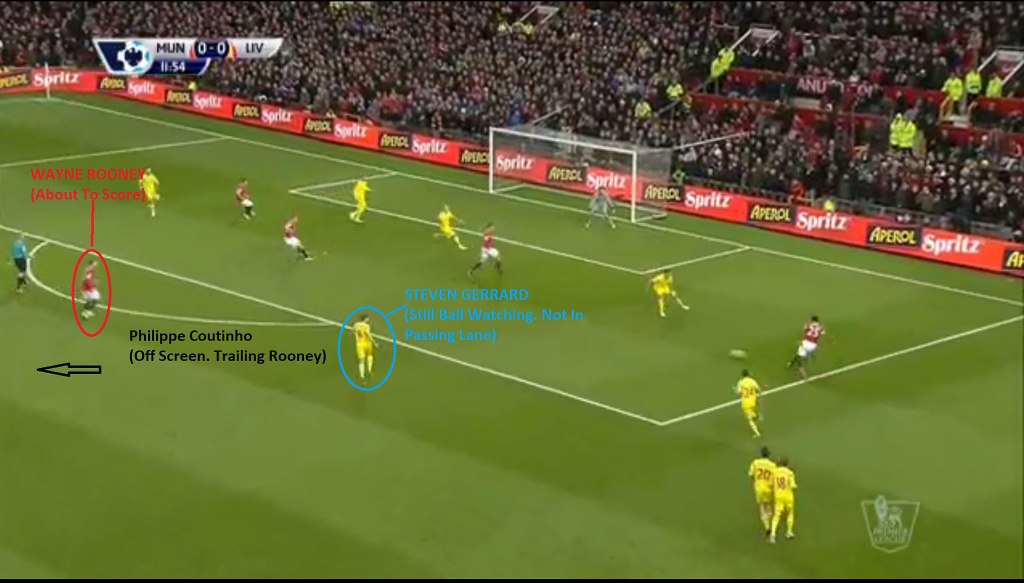 When we move a few seconds forward, Gerrard’s lack of positional awareness becomes apparent. With Valencia in crossing position, Liverpool’s skipper, now the sole protector of the midfield, is behind the ball and not in position to prevent Valencia from cutting a pass back to Wayne Rooney, who is charging from the midfield to the top of the box. During this passage of play, Steven Gerrard literally does nothing to affect the United attack.

Should someone else have tracked Rooney’s run? Philippe Coutinho is just offscreen, trailing a couple of feet behind Rooney. As a general rule, Coutinho should be fine letting Rooney go. Coutinho is Liverpool’s most attacking midfielder, and United’s most defensive midfielder, Marouane Fellaini, hasn’t joined the attack. These kinds of coverage transitions happen all the time, with an advanced midfielder handing off a run to a deeper midfielder to pick up. The only reason for Coutinho to go with Rooney is to cover for Gerrard. But again, there’s no reason Gerrard should need this cover in the first place.

Now, there’s ample evidence at this point that Gerrard is not very good at the defensive side of his duties, so maybe Coutinho should assume his captain will be out of position? Except then you have a situation in which one of your attackers is consistently retreating to the edge of his own penalty area and leaving Raheem Sterling totally isolated as the lone striker. You can’t actively carry dead weight at such an important defensive position and not have it blunt your attack.

Caught Between Attack and Defense

This is the crux of Liverpool’s problem. To attack in the ways they’ve been successful over the past year — fast, sudden raids on opposing defenses — Liverpool’s attackers have to remain higher up the field when the team doesn’t have the ball. To do that, the attackers need to trust the midfielders behind them to do their jobs. And then those midfielders have to trust their defenders. It’s a high-wire act made all the more dangerous by the fact that the players occupying these roles aren’t there for their defensive abilities. Gerrard plays as a deep midfielder in order to spring attacks with passes up to those lightning-quick attackers, Dejan Lovren is the side for his passing ability as well, and Moreno’s value comes from his blinding speed in getting forward.

So, the choice becomes: Give your most-advanced attacking players more defensive responsibility in order to cover for your, you know, defensive players’ defensive inadequacies, or keep your attackers high up the field and give up goals like the one Wayne Rooney scored in the 12th minute.

Last year, Brendan Rodgers went with the latter, and Luis Suárez and Daniel Sturridge covered up plenty of defensive mistakes. Those two — with Sterling as a turbo third wheel — would just go out and score more goals than the other team. This year, that’s not an option, and Rodgers has been unable to adjust. He’s careened wildly from too open to too conservative and back again. We’re almost halfway through the season and Liverpool are barely clinging to the top half of the table. The question is no longer whether Rodgers can keep all of those balls up in the air; it’s too late for that. What matters now is whether he can pick them up again — and whether Liverpool’s ownership will even give him the time to do so.