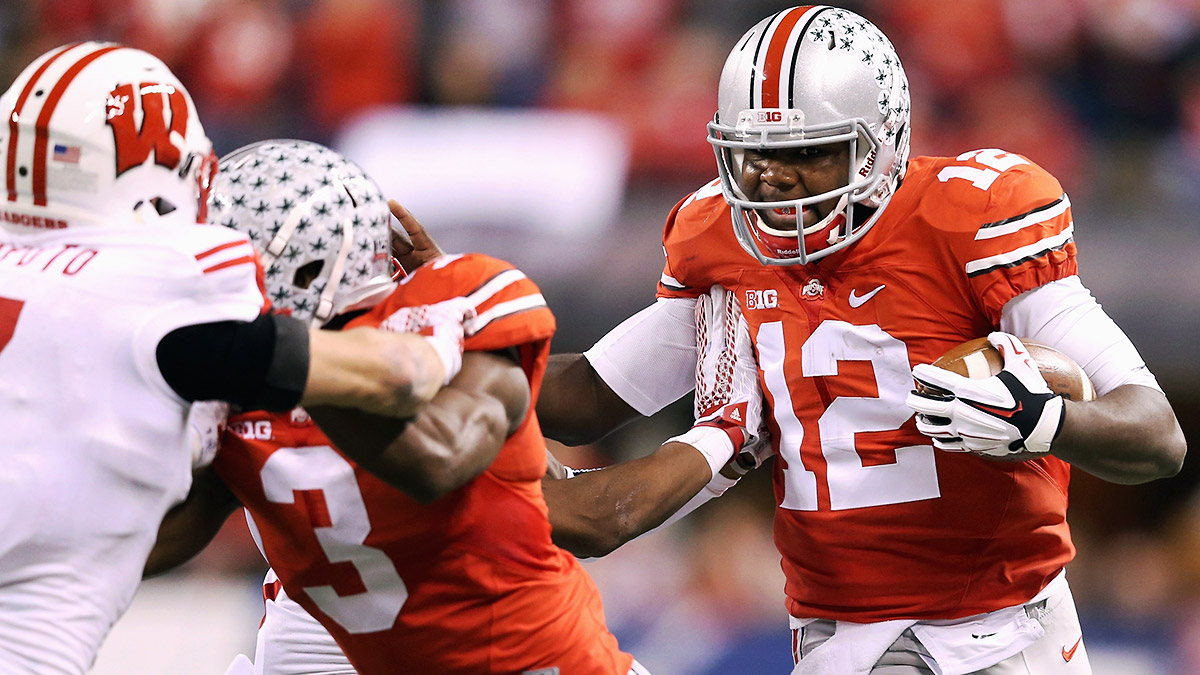 And then there were four! We’ve come at last to our first College Football Playoff, and not one team in this inaugural cluster made it through to the semis without giving its fans occasional vapors. Here, we trace each squad’s journey (previously: Alabama, Oregon, Florida State), remembering the good times and the times when a national title contender lost to Virginia Tech at home. Hey, remember that? Didn’t hear much about that.

Your 2014 come-from-behind, last-minute, squeakin’-in addition to the playoff pool is … the seven-time national champion Ohio State Buckeyes. Nice to finally see something go right for these guys. OSU is the only playoff team not to come out of the preseason top four, instead clawing and scraping all the way up from its initial no. 5 ranking, which it earned coming off postseason losses to Michigan State in the Big Ten championship game and Clemson in the Orange Bowl. There were some hiccups along the Buckeyes’ path to redemption. A hiccup. A Hokieup. Can you guess what it was?

For the first time in what felt like all of human history, the Bucks were tasked with beginning a campaign without the services of quarterback Braxton Miller, who reinjured his throwing shoulder in fall camp. Whatever to do? Having a backup on hand who can throw for 2,800 yards and run for 900 more, as redshirt freshman J.T. Barrett did, helps, as does having as a running back who can rack up 1,400 yards, like Ezekiel Elliott managed. And that’s not even getting into the defensive makeover the Buckeyes undertook in the offseason. Ohio State’s coaches deserve every award thrown their way this year, and then some.

Definitely beating a Navy team we had pegged for an undefeated season,1 and in Barrett’s first start. Definitely that. (What? It was a better game than the box score allows!) Avenging last season’s Despondent Pizza Bowl with a 49-37 victory over Michigan State had to feel OK, though.

There are two reasons we counted Ohio State out of the playoff race, one of which came early, the other late. The first was that Week 2 pantsing against the Hokies. The Buckeyes weren’t the only top-10 team to lose on September 6, but at least the Spartans had the decency to do it in Eugene, against then–no. 3 Oregon.

OSU was out, and that was that was that, and then all the other teams started losing, too. (All except Florida State, and even the Seminoles came close, more than once.) The Bucks were back in the top five by the time the Big Ten championship rolled around again, but with Wisconsin riding a hot streak at the season’s end, the game in Indy looked like a competitive matchup. (We thought that about several of the conference championships, didn’t we? Simpler times.) We expected a close game, with the Badgers favored by a few points as preseason third-string QB Cardale Jones started for the Bucks following Barrett’s season-ending ankle injury the week prior. What we got was a 59-0 Buckeye binge that planted the team squarely on the playoff committee’s lap.

It’s Urban versus Saban, again. Ohio State meets no. 1 Alabama in the Sugar Bowl on New Year’s Day, for the right to face the winner of Oregon–Florida State in Arlington.