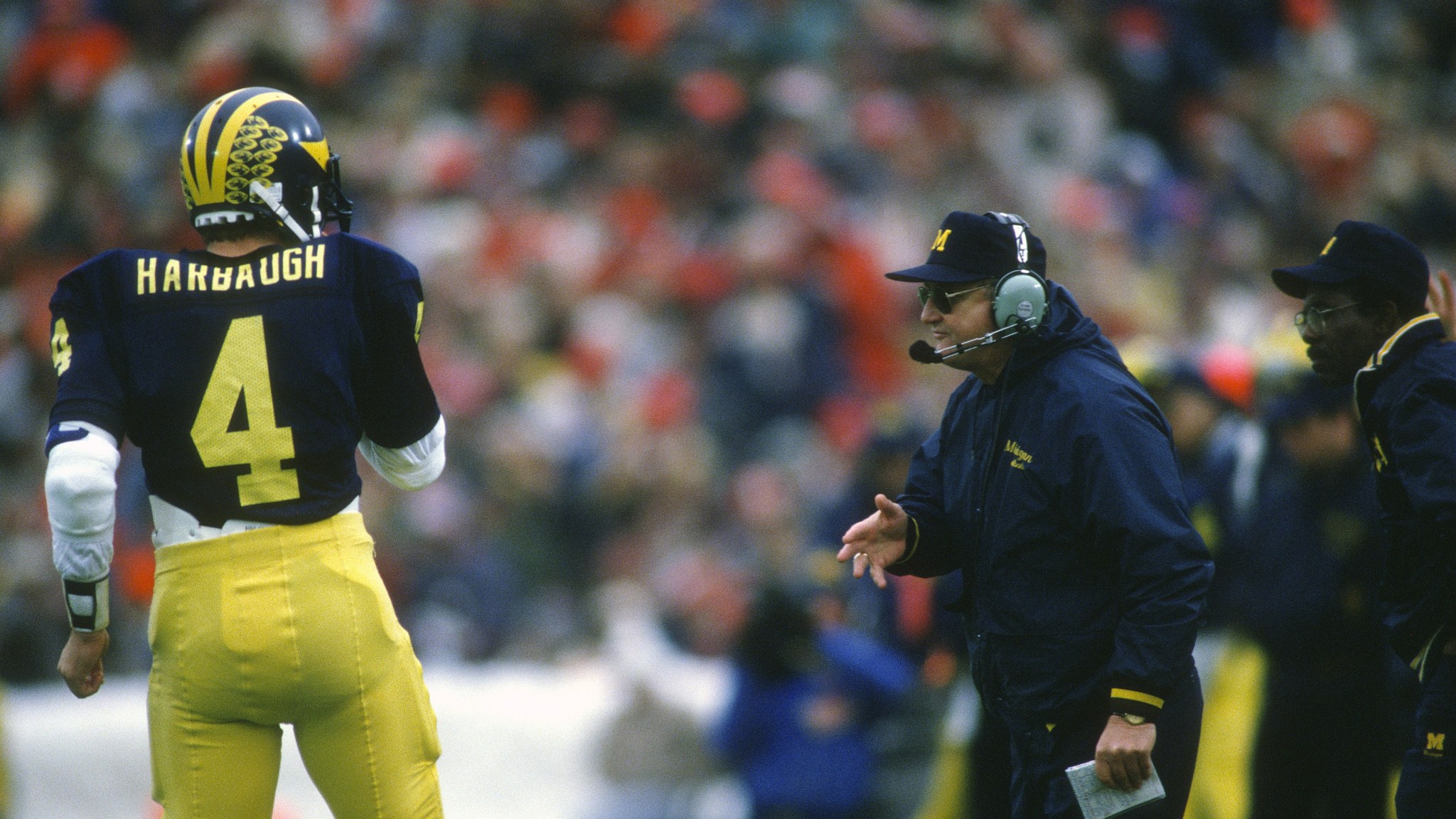 It makes sense that someone like David Cutcliffe would turn down Michigan to stay at Duke. It sounds crazy — and reports of the Cutcliffe offer/rejection were later debunked — but just think through the particulars.

Cutcliffe is a king in Durham, with no pressure and a program that treats every inch of success like a bonus. He hosts Peyton Manning workouts in the summer, he doesn’t have to win titles, and he’s still considered a genius by everyone around the sport. He’s at “Rick Ross at an endless seafood buffet” on the quality-of-life spectrum, and that’s hard to leave behind.

The moment Cutcliffe showed up at Michigan, he would inherit the prestige that comes with one of college football’s biggest brands, but also a program that’s been broken in several different ways and has stayed that way through two failed coaches. It’s not unlike Stan Van Gundy getting $30 million to coach the Pistons, except that Michigan football also comes with a fan base that expects the Pistons roster to turn into the Spurs within a year or two. What amount of money is worth that pressure? This is why most successful coaches around the country wouldn’t leave a decent situation to freeze their ass off with the Wolverines.

Jim Harbaugh is a different story. Michigan might be willing to bankrupt the university to get him there, and he would enjoy the benefit of the doubt for at least three years if he went to Ann Arbor. This is in part because he played there, but mostly because he of how much he’s succeeded elsewhere. Everything Michigan wants to be, Harbaugh’s already been.

Michigan has limitations that have been holding it back in recent years? Not as many limitations as Stanford had, and Harbaugh took that program from 1-11 to the BCS. Now he’d be returning to college with more recruiting credibility than 95 percent of his peers and the same brilliant schemes that have been maxing out talent for the better part of a decade. He could bring his alma mater back to the top, and in the process, go a long way toward restoring the entire Big Ten. If it doesn’t work after a few years, he’d have an NFL job waiting the second he left.

Right now his options are threefold. He can sign a new deal with the 49ers and come back to a locker room that’s apparently turned on him (not likely), he can go to a disastrous situation like New York or Oakland (somehow, most likely), or he can go to Michigan. As two separate sports’ worth of writers debate the right move over the next week or two, I just need to lay out my case.

This is why Jim Harbaugh should go to Michigan.

Did you read Seth Wickersham’s profile of Harbaugh back at the beginning of October? That profile is why he should go to Michigan.

Look at this man.

At the University of San Diego, where in three years he turned a joke of a program into a two-time Pioneer League champion, he ran hills with the players, sometimes pushing through his own vomit. At Stanford, where he engineered a once-in-a-generation turnaround, he renamed the Oklahoma drill the Stanford drill to signify the toughness he wanted to instill. At San Francisco he makes the winning side run gassers after two-minute practice.

A speech Harbaugh delivered to the team a few days later, entitled “2014 1st Team Meeting,” explained his approach to battle. He usually writes in a spiral notebook, but this was typed and eight pages long. “I will be your alarm clock and wake you early,” he said. “It can be a great temptation to rest on the field and let the opponent have a play without making him pay for every inch. I must hold his pain where it is. Mine does not matter … The punishment I inflict, his fatigue, and that he is up against something that he does not comprehend is everything.”

The best part of that speech is that he called it “2014 1st Team Meeting.” He’s organized and obsessive enough to name all his speeches, but too busy holding his enemy’s pain to actually come up with a real name.

It was vintage Harbaugh, sincere and obsessive, inspiring and crazed. And its decisive moment, as Harbaugh described how he fights in the trenches, contained a clue as to why a coach who has won 74.5 percent of his games might just be expendable: “My opponent is going to have to die. But does he have to kill me too? He is killing me. But he has a right to. I have never seen a greater opponent than him. I do not care who kills who now.”

It’s like a pep talk ghostwritten by Ra’s al Ghul.

Every rumor you heard about Harbaugh burning out the San Francisco locker room — even back when the 49ers were 3-1 — makes perfect sense, next to an anecdote like that. Imagine having to work with that guy every day. “I will be your alarm clock and wake you up early,” he said to a roomful of adults.

But then, we’re not talking about Harbaugh as a 49ers coach. 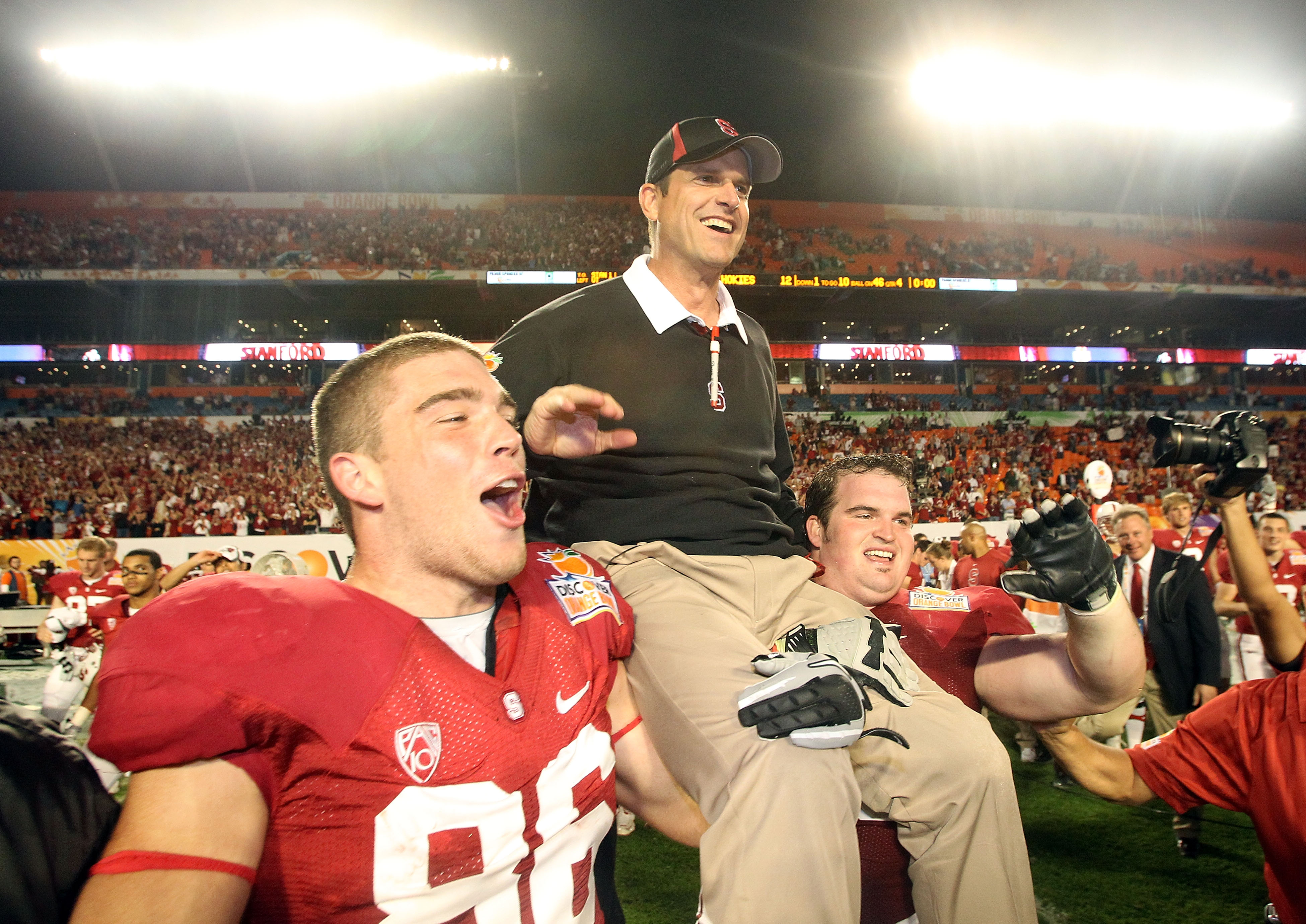 The greatest college coaches aren’t criticized for their year-round paranoia and micromanaging, they’re deified for them. This GQ profile of Nick Saban is every bit as psychotic as the Wickersham profile — they are essentially the same article — except the Saban piece comes with without any questions about his job security. The same goes for this Wright Thompson profile of Urban Meyer.

There’s a certain style of OCD tyranny that’s proven dominant in college football, and Harbaugh fits the mold better than just about anyone. “It can make Harbaugh seem spacy or rude,” Wickersham wrote, “but everything that isn’t coaching football is a distraction.” That sounds familiar.

Harbaugh sometimes brings glasses of whole milk to coaches meetings, believing it builds strength. While other staffs slave past midnight, he lets his coaches leave early a few nights a week so they can have dinner with their families; he even once babysat the toddler of one of his assistants so the coach and his wife could have a date. He eats lunch with a different group of players each day to get to know them. He buys cakes on birthdays and has a Will Hunting ability to calculate quickly how many days someone has been alive.

He’s obsessed with his own corny maxims, he wears the same pair of pants every day while drinking the same whole milk, and he gets a kick out of surprising players with birthday cakes and trivia. He’s brilliant, but he’s also sort of a dork. This is a college coach.

The same habits that have become grating in an organization full of professional egos would make him great with a locker room full of 20-year-olds. There would be no front office to clash with, no millionaire players tuning him out. Rosters turn over every year in college, and by the time Harbaugh’s grinding tactics might burn some players out, those players would have graduated or moved on, and there’d be a whole new crop ready to be impressed by Hemingway quotes and League of Shadows pep talks.

It’s not to say Harbaugh can’t succeed elsewhere in the NFL. He’s a good enough coach to thrive anywhere. But if we’re weighing the potential of each destination, Michigan makes a lot more sense than the Jets, Raiders, Bears, or even the Dolphins. Success in college is just as hard to attain, but much easier to sustain.

That’s the other side of this conversation. The 49ers roster he inherited had more talent than people realize, and the front office he’s been working with is one of the two or three best in the league. That’s not to minimize how important Harbaugh’s been to the team’s success, but wherever he goes next will be more complicated. Either he’ll be making the personnel decisions himself (always dicey), or he’ll be with a front office that won’t be as good as the 49ers’ (equally dicey). Harbaugh is phenomenal, but no great coach makes three straight NFC title games without some help. If he leaves San Francisco for anywhere else in the NFL, that help won’t necessarily be there.

I understand Harbaugh reportedly wants to stay in the NFL, but that’s not the point. I won’t try to parse the psychology that would keep him in the pros. This is just about laying out the evidence. When you consider the person and the options, this debate shouldn’t be that complicated.

Harbaugh’s not well liked where he is. Staying in the NFL, with the Niners or another team, just means he’ll face the same pressure every year, along with a constant wave of new challenges that come with fighting to stay dominant in the parity era — juggling cap numbers with a front office every spring, and micromanaging adults who don’t want their lives micromanaged.

Harbaugh’s current situation is the inverse of David Cutcliffe’s. What amount of money makes life in the NFL worth it? He can go to Ann Arbor tomorrow and be a king.

Do you think Nick Saban ever regrets leaving the Dolphins?