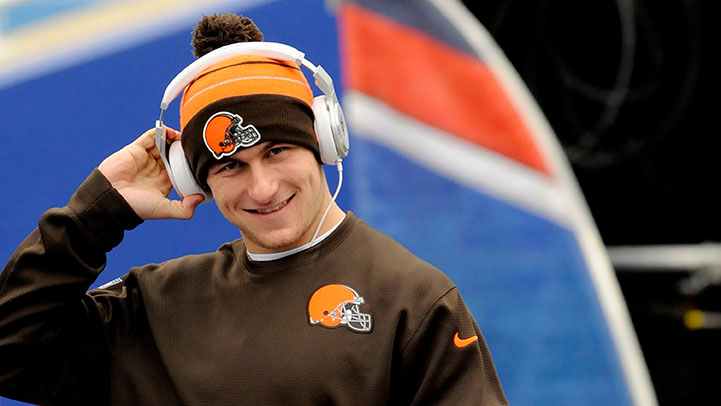 During the afternoon slate of games on Sunday, I threw out a question.

You're playing a backyard football game, and you can pick any current NFL quarterback for your team. Who do you go with?

While I had some names in mind, I was curious and purposefully didn’t set any criteria, because that’s a significant part of the answer. Do you want to win? Do you want to have a good time? Do you want all your friends to survive? All of those considerations come into play — and after combing through the responses, well, I’m not sure we’re any closer to an answer.

@robertmays Rodgers and it's not even close

Rodgers was mentioned the most, and his nominations usually came with the same “Is this even a question?” tone. Listen, I get it. He’s the best quarterback going, can pull plays out of his ass, and seems like a good hang. But it’s not quite the obvious choice so many made it out to be.

One factor I didn’t really consider when I threw out the question is velocity. If this fictional game is happening in a cold-weather climate in November, I’m guessing you and your buddies aren’t interested in catching missiles. He may not be Brett Favre, who seemed to derive a perverse glee from mangling his receivers’ digits, but have you seen Aaron Rodgers throw a football? His arm is terrifying, and the first time he unloads on a slant — normally run by Randall Cobb, but this time it’s your friend Gary — someone is breaking a thumb or a nose. You could do worse than Rodgers, but I’m guessing you could also do better.

@robertmays How is possible to not say Andrew Luck?

In a lot of ways, Luck is similar to Rodgers. When the play inevitably breaks down, he’s going to make something happen, and if you’re playing tackle, Luck becomes a serious problem. This occasionally gets understated: Andrew Luck is a massive human being. But my concern with Luck isn’t about him breaking fingers with throws or destroying souls when he runs someone over.

If you haven’t gotten around to Kevin Clark’s piece in the Wall Street Journal about Luck’s bizarre version of trash talk, I highly recommend it. Apparently, whenever Luck gets hit, he compliments whoever just crushed him. Understandably, this confuses the hell out of people. Not that any mortal could actually bring Luck down, but say he lost his footing on a play in the backyard and you caught him with a pretty good shot. How infuriating would it be if he patted you on the way back to the huddle and said, “Great job!” It would drive me insane. A moderate amount of non-cordial shit-talking is healthy, and in a backyard context, even necessary. Luck’s out.

@robertmays Brady. He'd probably beat somebody up before admitting a loss. Especially in a backyard game.

The case for (or against) Brady depends on what you want out of this game. When it comes to Brady’s personality in pickup football, we don’t need to speculate. There’s actual evidence.

In his recent Sports Illustrated story about Brady, Greg Bishop wrote about a game the New England quarterback played in as part of an event for his charity in 2009. In the final quarter, Brady chided the guys in the huddle for not playing hard enough. So Christian Fauria, who played tight end in New England for four years, pushed it a bit. He pulled his hamstring and then reminded Brady to chill: “You’re the quarterback for both teams.”

So again, it’s about what you’re looking for. If you’re a pathologically competitive person (and in a football context, I’m guilty), then getting head-butted by Tom Brady while his spit flies into your mouth would probably be a blast. If you just want to enjoy a couple beers and toss the ball around, he might not be for you. Now that he’s entered full-on, late-career, “drinks only green stuff from a blender” mode, beer might not be an option for Brady. And if it is, it’s definitely gluten-free.

@robertmays Is it tackle? Obviously Cam then

Tom has a point. Luck is a massive human, but I’m not even sure Cam is human. Linebackers have a hard time bringing Cam down in the open field — and none of us are linebackers. But while I understand that Cam may be the most effective option, that version of a backyard football game doesn’t sound all that fun. I’m just imagining the scene from Teen Wolf when he’s dunking on every play while the rest of the team stands around and watches. I’m Chubby in this scenario. And that doesn’t thrill me.

That being said, having perpetually upbeat Cam involved almost guarantees that everyone has a good time, even if you’re spending most of the game watching him flatten people. It’s a tough call.

@robertmays Rivers. He has like 26 kids, all he does in his free time must be play backyard football

Rivers was the inspiration for the original question. He’d just flipped a pass to Branden Oliver that he had no business getting off. Skillwise, Rivers has most of what you’d want. At times, the Chargers’ offense feels like it consists entirely of plays drawn up in the dirt, so it’s a natural fit. He also throws a weirdly catchable ball. The Chargers are consistently at the bottom of the league in dropped passes, and the constant factor there is Rivers. He gets it where it needs to go, but he puts so much touch on passes that they pretty much beg to be caught.

Personally, I don’t think anyone else would make our passing game better — and the amount of backyard ball he plays with his seven children shouldn’t be discounted — but the drawback with Rivers is having to hang out with Philip Rivers. If anyone is going to call pass interference in a pickup game, it’s him, right? No amount of touchdown catches could possibly offset that.

@robertmays Big Ben – I can just see him dragging everyone into the end zone, no one able to tackle him

Roethlisberger’s name came up more often than I expected, but it makes sense. It was a mistake leaving him off the junk-pass list I wrote last week. He’s an all-timer when it comes to making something out of nothing — and the same issues we’d have bringing down Luck or Newton also apply here.

There are very few good arguments against Romo, to the point that I’m surprised he didn’t receive more mentions. Combining a catchable ball and improv ability, he’s right there with Rivers.

I have only one objection to Romo, and it concerns the story about his bachelor party. People should spend that weekend however they want, and I guess I can understand how, at 31, a couple quiet days with friends is more appealing than a migraine-inducing trip to Vegas. But marathon games of hide-and-seek? I don’t know.

@robertmays Russell Wilson. Scrambling is key after the 3 Mississippi rush count. Plus he looks like he enjoys a post game Capri Sun

After Rodgers, Wilson was probably the most frequent answer. There’s a lot to like. He’s right there with the best make-shit-up-as-you-go quarterbacks we have, and it’s easy to imagine him lofting passes over your buddy who gets tricked into thinking Wilson’s about to take off. In a way, he’s almost too obvious an answer.

I have two worries, though, when it comes to Wilson. First, he quietly belongs with Rodgers and Luck in terms of being able to shatter your friends’ hands with his throws. The dude has a cannon. Second, does Russell Wilson really seem like the type of guy you’d want to spend an afternoon with? He is the type of guy that a Super Bowl–caliber team would want at quarterback, but it seems like he’d see all this as pretty pointless. A couple hours spent outside are a couple hours when he could be watching film, or helping to save the world. I have a feeling he’d be silently judging us the whole time.

@robertmays Manning, would take it seriously but would throw nice soft ducks for me to catch.

Hear me out. On the surface, it seems like Peyton would present the same type of dynamic as Brady. Nobody wants their own “Goddammit, Donald!” moment.

But more than Brady, I get the impression that Manning would be able to separate NFL Peyton from Backyard Peyton. We can accuse Peyton Manning of plenty, but it’s tough to claim he doesn’t have a sense of humor. Of course, I say that, and the first time a route gets broken off, there’s a chance he snaps back into that mode and orders someone to go lock himself in the shed.

Still, I don’t think we should be so quick to discount Manning on “He’d just yell at me the whole time” grounds. The arm-strength issues that he occasionally runs into on actual football fields would be a virtue here, and despite our understanding of his on-field persona, Manning does come across as the type of guy you could sit and have a beer with.

You couldn’t want anything more than what Johnny brings to the table. Sunday’s game aside, he’s the backyard quarterback. We’ve been watching him run around as his receivers get open for the past three years. And based on most of those throws, it doesn’t look like you’d have to worry much about the safety of your fingers. Also, doesn’t it feel like Johnny would be more game for this than anyone else? (Actually, as Ryan Romenesko points out, Kyle Orton probably would, but Johnny’s close.)

Manziel has all that going for him — and that’s before you even consider the hangout implications/possibilities involved. The only “problem” with having Manziel involved is that the postgame party might be too fun. But who am I kidding? That’s not actually a problem. I’m not sure we can ever get to a definitive answer to this question, but in my mind, Manziel’s the closest one we have.