Ducking the Bucks: Inside the Evolution (and Oregonification) of Urban Meyer’s Ohio State Offense 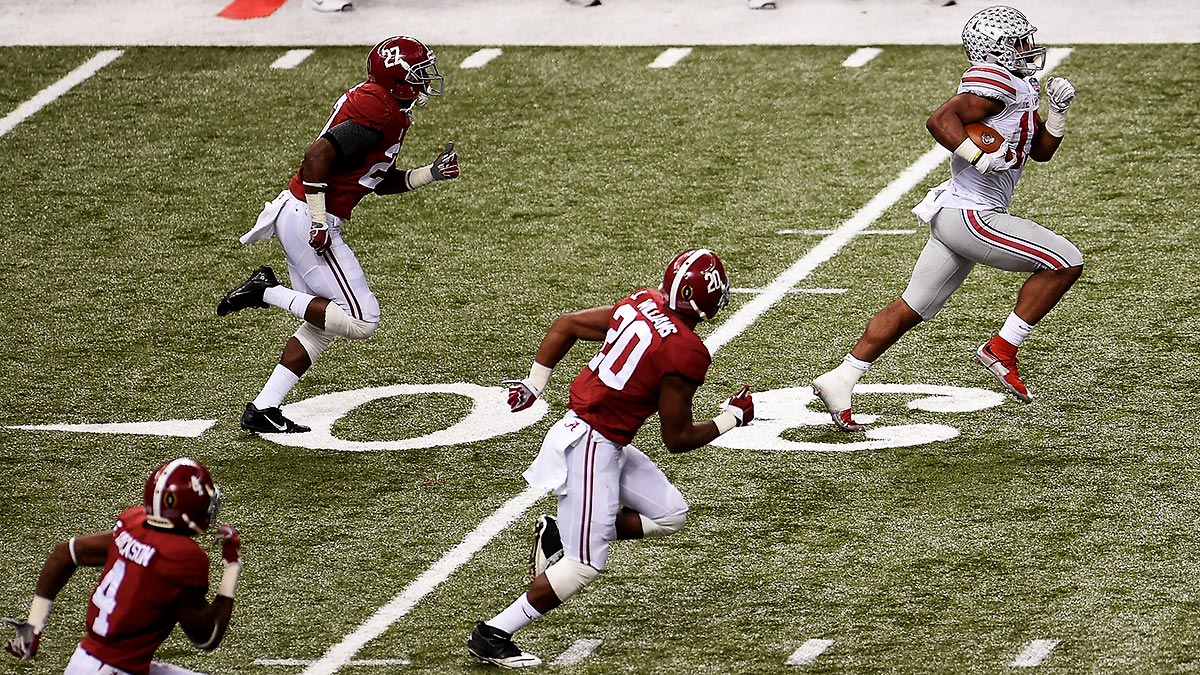 Despite being known for the innovative spread offenses his Utah and Florida teams had fielded, Urban Meyer had few obvious offensive coordinator candidates in mind when he took over as Ohio State’s head football coach following the 2011 season. Dan Mullen and Steve Addazio, Meyer’s former UF coordinators, had already become head coaches, and Meyer faced another complicating factor: Though he remained committed to his vision of a power-based spread offense, he also wanted his system to evolve with the times, and he knew he needed a coordinator who could help him achieve that balance.

At Florida, Meyer’s offense revolved almost entirely around the quarterback. From 2007 through 2009, Tim Tebow led the SEC in pass efficiency while also leading the Gators in rushing yards, and the lasting image of those UF offenses is of Tebow plunging into the line on power runs. That approach worked with a 6-foot-3, 235-pound rhinoceros at quarterback, but with Tebow off to the NFL in 2010, Florida’s offense began to fall apart, and the Gators limped to an 8-5 finish. Meyer stepped away from the game in 2011 to spend more time with family, and during that time he was able to study many of the sport’s most innovative coaches and schemes. When Meyer rejoined the coaching ranks and started searching for a coordinator who could mesh the newest trends with what Meyer had done before, he asked around for suggestions, and several of his closest friends in the business suggested the same name: Iowa State offensive coordinator Tom Herman.

“It started with [then Oregon head coach] Chip Kelly, and then some other very close friends who said, ‘Look at this guy,'” Meyer told assembled media before Ohio State’s Sugar Bowl matchup with Alabama. Though many fans and media considered the hire a head-scratcher — “Got the question, ‘Who is Tom Herman? You’re bringing Iowa State’s offense to Ohio State?'” Meyer said — time has proven Meyer right: Ohio State finished in the top 10 in total offense and top five in scoring offense in 2013 and ’14, and the Buckeyes are poised to face Oregon in Monday’s national championship game thanks largely to the offense’s 537-yard, 42-point performance against the typically stingy Crimson Tide in the College Football Playoff semifinal.

Herman, who will take over as Houston’s head coach after coordinating Ohio State’s offense in Monday’s title game, has helped morph the Buckeyes’ offense from Meyer’s traditional system into an updated version that carries many of the hallmarks of the team OSU will face in Arlington on January 12. Specifically, Herman has shifted the Buckeyes away from the single-wing-esque QB power runs that Meyer preferred during the Tebow years and that since-injured QB Braxton Miller leaned on while leading the Buckeyes in rushing in 2012. At Florida, Meyer preferred “gap blocking” schemes: running plays designed to grind out a few years at a time, with “down” blocks from linemen to the side the play was directed, backside linemen pulling to lead the way, and Tebow often lowering his shoulder behind them.

In contrast, Herman has based Ohio State’s offense around the inside zone: an inside, downhill running play that uses zone blocking to automatically adapt to the defense, a crucial trait when used with the no-huddle, another tactic now featured far more in Columbus than it ever was in Gainesville.

Many coaches, including Meyer, have said that zone blocking plays are “finesse” runs. Meyer has always viewed his offense as a power attack, albeit one run from the spread, but Herman helped convert him, resulting in Ohio State building its offense around the inside zone, with quarterback reads and receiver screens coming off that same basic action. Meyer bought in because the Buckeyes’ version is all about power: It’s a true gut shot right up the middle, with the runner aiming for the “A” gaps next to the center.

Big runs like this one by Ezekiel Elliott against Wisconsin have become commonplace for OSU the last couple of years, with one rather notable exception: the Buckeyes’ lone loss of the season, in Week 2, when Virginia Tech employed a “Bear” or “Double Eagle” front, in which the defensive line pinches down and lines up with a nose tackle over the center and defensive linemen over each of the offensive guards. This strategy effectively shut down Ohio State’s inside zone running game, as the Buckeyes managed just 108 yards rushing on 40 attempts, with 70 of those yards coming from quarterback J.T. Barrett, who’d taken over in the preseason for the injured Miller, and who’s since given the reins to Cardale Jones after suffering a season-ending injury of his own. This wasn’t the first time a “Bear” front had proven successful against a Meyer offense, and Ohio State’s coaches knew they would need to find answers to adjust.

“Virginia Tech was the seminal game for Ohio State this season,” Ross Fulton, who studies Ohio State’s schemes for the site Eleven Warriors, told me. “The coaching staff essentially laid an egg in that game, and the rest of the season has been a reaction to it.”

The most important adjustment Ohio State made after the loss to the Hokies was to improve at running the ball on the perimeter of the defense — and to do so with the running back. Traditionally, Meyer and even Herman would have relied on the QB to pull the ball on an option play and try to get to the edge, but the Hokies crashed their safeties down on the quarterback, holding Barrett under 3 yards per carry. In response, Meyer and Herman turned to one of the staple plays of their title game opponent: the Oregon Ducks’ sweep.

Sweeps are as old as football, and the most famous is Vince Lombardi’s old Green Bay sweep. But under Kelly and offensive coordinator turned head coach Mark Helfrich, Oregon tweaked the blueprint, devising a way to run a version of the sweep in the context of a spread formation. Before this season, Meyer and his staff met with Kelly and his Philadelphia Eagles coaches, and in 2014, Ohio State made the sweep a key part of its arsenal.

The sweep is a perfect complement to OSU’s inside zone because as soon as the defense begins pinching down, Herman can call this play to get the ball to the perimeter of the defense, with several athletic linemen out in front. It’s worked: When Alabama shifted its defensive linemen down into a type of Bear front in an effort to stop OSU’s inside runs in the Sugar Bowl, Herman called for a version of the Oregon sweep, and the play went for an 85-yard Elliott touchdown — the biggest score of the game, and maybe of the Buckeyes’ season.

The similarities between the Ohio State and Oregon offenses are no coincidence. “We know Oregon,” Meyer said in his press conference after the Sugar Bowl win. “I’ll probably be able to call Oregon’s plays because we study them and they study us.” Two units focused on evolving will undoubtedly enter Monday’s game armed with new wrinkles — and each side will need those innovations against an opponent that increasingly looks like a mirror image.

A Dad Through the Lens of ‘Rudy’