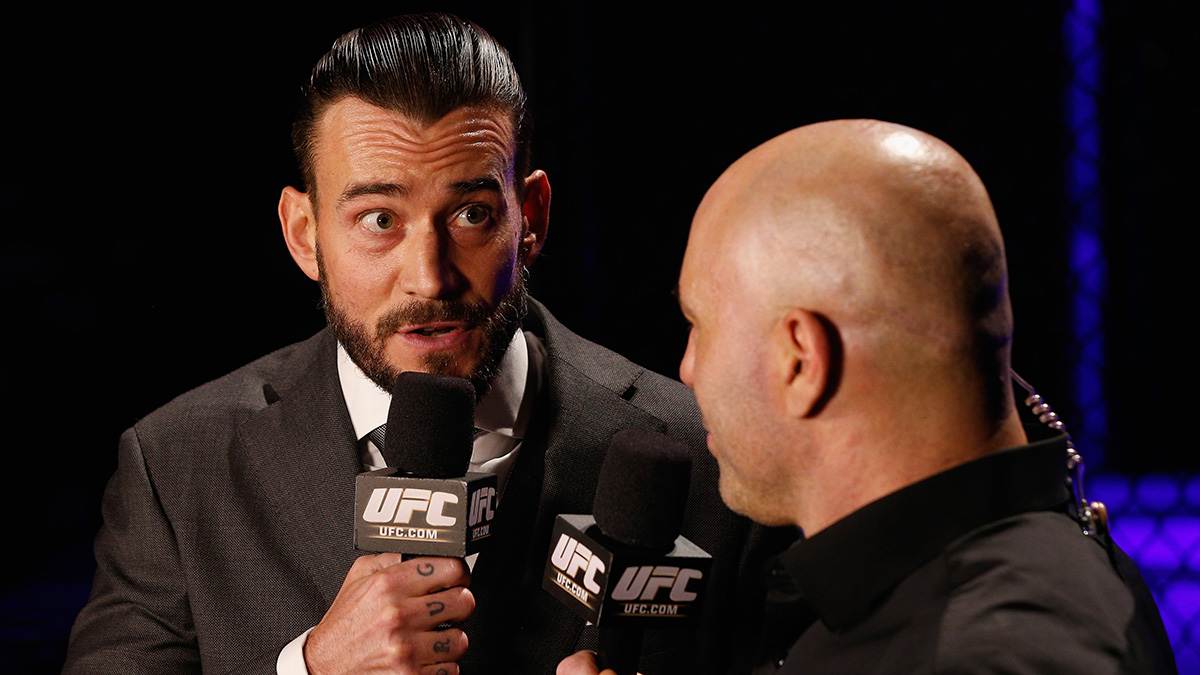 Well, I guess we can officially stop fantasy booking CM Punk’s reappearance at WrestleMania. The shocking announcement came Saturday night during UFC 181: Punk is going to the UFC, to fight sometime in 2015. It’s an odd match, because Punk is 36 years old and has never fought professionally or trained competitively. He’s nothing like Brock Lesnar, the former WWE star who became UFC champion (and then again became a WWE star); Lesnar was an NCAA heavyweight champion wrestler and a physical freak of nature. For UFC, Punk is more like Kimbo Slice, the YouTube knockout artist who was brought in to lend star power to Season 10 of The Ultimate Fighter. Slice went 1-1 in the UFC, and he’s regarded with — at best — amusement among hard-core fight fans.

But as with Slice and Lesnar, Punk brings something to UFC that’s difficult to come by in the fighting world: mainstream recognition. And it’s no surprise that along with that recognition come the complaints that the UFC is selling out to boost pay-per-view buys. It wouldn’t be the first time a legitimate combat sport strayed from its principles to excite fans.

Almost a century ago, a trio of wrestling professionals — the world champion, Ed “Strangler” Lewis; a promoter named Jack Curley; and a sparring partner-slash-industry visionary named Toots Mondt — changed the sport forever. I wrote about it in The Squared Circle:

That period of wrestling in the 1920s — the higher-profile championship-level matches in particular — had its share of fixed bouts, sure, but they were in the service of a more fascinating reality. Mondt was hired by Sandow to be Lewis’s sparring partner and enforcer; he would take on opponents before they got in the ring with Lewis to make sure they were “worthy” foes, but in reality, Mondt — sometimes regarded as a better pure grappler than Lewis — would soften them up for his colleague. Perhaps it was the fatigue from this role as the heavy-lifter in the outfit that led to him rethinking the whole thing, or maybe he was purely a futurist, which is how he’s usually painted; regardless, Mondt could see what nobody else could, that the sports fans weren’t just tired of wrestling — they were oblivious to it. They couldn’t appreciate the minute maneuvers that made up a marathon heavyweight match. So Mondt conceived of a new style of wrestling that would combine classical Greco-Roman and freestyle catch wrestling with boxing and the sort of brawling that was popular on lumberyard campsites to birth a new hybrid that was wholly entertaining and, as such, the direct antecedent of what we know today as professional wrestling. Mondt created submission holds — some seemingly from thin air, many of which are still used today — that were meant to project out to an audience-member thirty rows back. Moves, in other words, that were meant to impress rather than to strictly inflict agony. He also conceived of the idea of a touring show, in which a stable of wrestlers would travel together from town to town, mixing and matching the opponents — or just repeating the matchups, night after night. This would allow the promoters full control over the card and cut out the need for local fighters to be hired and wages negotiated at every venue. It would allow managers to set the prices more definitively. And it would allow wrestlers to spar with comfortable partners, in bouts with predictable endings.

An implicit part of this new method was the fixed match. In order to appeal to the fans’ sense of drama and spectacle, the matches had to build powerfully to the endings, and the endings had to be fulfilling… [Lewis’s] authenticity married with Mondt’s artificiality confirmed that the best brand of wrestling is the exciting brand. What mattered now wasn’t who won but how they won, and how the crowd would respond. What mattered was how one match would get the fans to pay money for the next one.

The crucial takeaway here is that wrestling was a popular sport, but unlike boxing, wherein men stood tall circling and swinging, wrestling matches often devolved into slow-motion affairs. They featured two combatants lying mostly still on the mat for long stretches of time, making tiny shifts in weight and position in search of a winning handhold. The solution was to stand the fighters up, to allow a wider array of moves, and to build characters and rivalries that fans found compelling. In essence, they decided to make it fake — and it worked.

During its rise to prominence, UFC dealt with similar problems. But instead of going the route of literal choreography, the company took a more activist role: It introduced “fight of the night” and “knockout of the night” bonuses and went to a round system that goosed the urgency of every exchange. The adage “don’t leave it in the judges’ hands” became the sport’s mantra, an innocuous reprimand (and alibi for often questionable judging) that morphed into an ethos that emboldens fighters toward drama.

The irony is that these changes — along with instituting weight classes and banning some particularly grotesque moves like eye gouging and groin shots — are what helped elevate mixed martial arts from “human cockfighting” to a respectable sport. Now, though, it seems like UFC is more interested in metaphorical cockfighting with WWE.

It’s no secret that UFC has learned a lot from WWE — the video packages, the mythmaking, the gravitation toward more outgoing fighters. And Punk is certainly in that last category. Just days ago, UFC president Dana White said he’d be interested in Punk and Lesnar (whose WWE contract expires next year), although White admitted he didn’t “know if [Punk] can fight or anything like that.”

Rener Gracie, a leading member of the legendary martial arts family that created Brazilian jiu-jitsu, and with whom Punk has trained on and off for the last four years, has been tentatively positive about Punk’s fighting potential. “With the little time he’s had with me spread out over so many years, he’s made remarkable progress,” Gracie told Fox Sports in January. “There’s no telling how successful he would be if he devoted himself full time to the training.” Last week, when asked again, Gracie said that despite his erratic training schedule, Punk is “remarkable.” Gracie continued: “He’s in the top tier of students that I’ve ever worked with as far as his retention ability goes.” But even so, UFC’s decision to sign someone with as little experience as Punk with hardly any real proof of his fighting ability has to be seen as a publicity move, plain and simple.

UFC announcer Joe Rogan — who has long been dismissive of non-fighters thinking they can compete in MMA — said on Saturday he was looking forward to calling Punk’s first fight, but in September, Rogan ranted against pro wrestling on his podcast. He called it “some weird, fucking jerk-off thing that strange guys do when they sit in front of the TV and pretend that they don’t know it’s fake.”

Far be it from me to insult UFC for this move. I love pro wrestling and UFC both, and I love the more cinematic aspects of UFC as well as the more realistic parts of WWE. The more the lines are blurred in either direction, the better, as far as I’m concerned. But hard-core MMA fans, remember this moment: This is how real fighting becomes “sports entertainment.” This is how a sport becomes a put-on. Which is not to say that Punk’s fights will be staged, but White has already stated that Punk will be brought along slowly (or, if you’re a cynic, coddled). “Punk is going to fight a guy that’s 1-0, 1-1, 2-1, something like that,” White said. “He wanted to do it. We’re going to give him the opportunity.” (A litany of fighters, including the actual Green Power Ranger, have already offered to be Punk’s first opponent.)

White also acknowledged the financial considerations that influenced UFC’s deal with Punk. “Pay-per-views were down because we haven’t had any fights that have held together,” he said. “But yeah, this guy can definitely sell some pay-per-views.”

White and WWE CEO Vince McMahon have a famously rocky relationship — when they’re not studiously ignoring each other, they’re challenging one another to fights. More than anything, though, both men prefer to insist that their companies have nothing in common. One of the most famous stories about McMahon is about when Ted Turner bought the NWA and called McMahon to tell him that he was in the “rasslin’ business.” “That’s great,” McMahon replied. “I’m in the entertainment business.” With this crazy move, White is not-so-subtly admitting that UFC is not above dabbling in the “entertainment business,” and perhaps more like WWE than he’d like to admit.