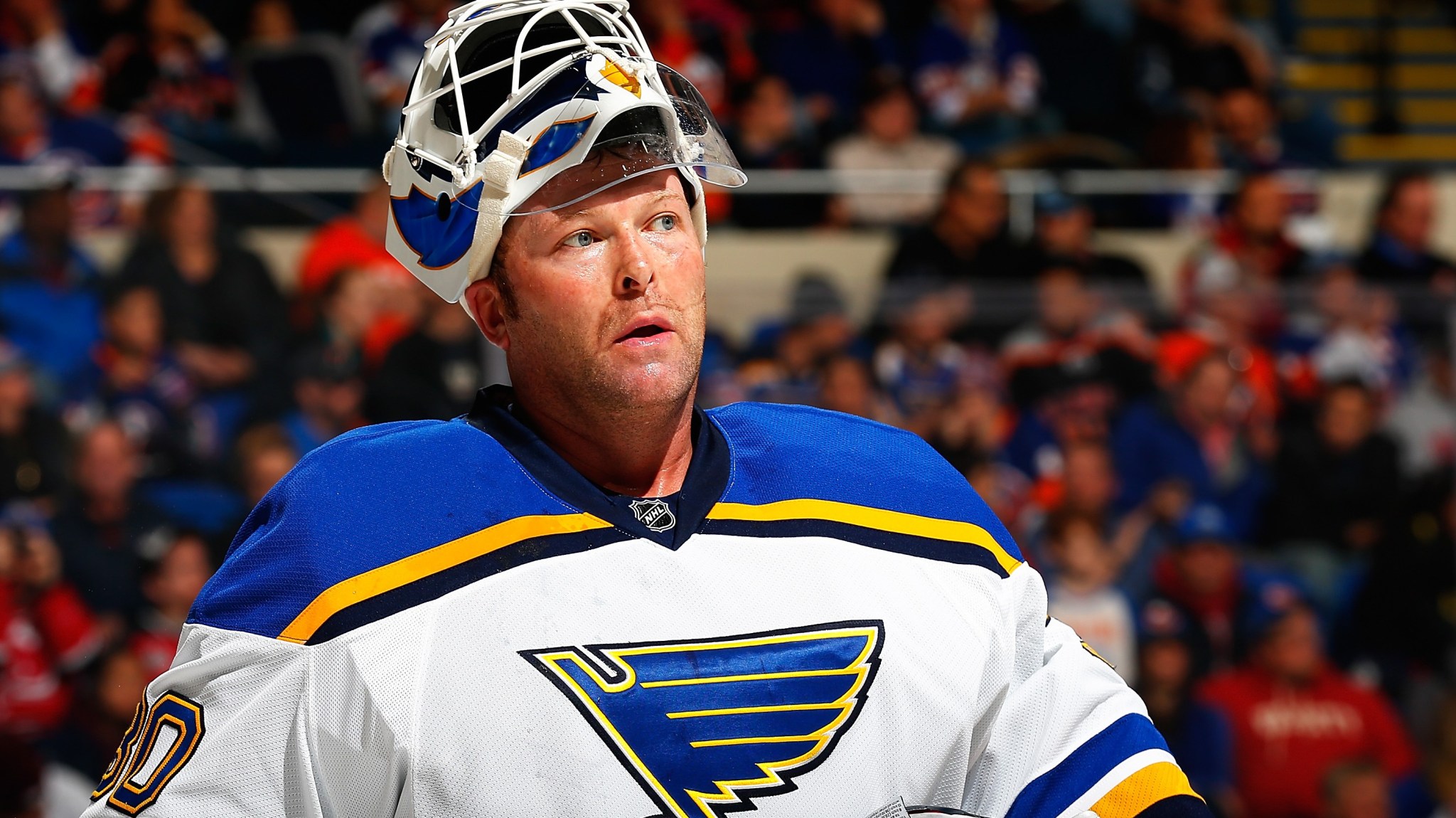 Theme of the Week: A Legend Returns

Martin Brodeur is back in the winner’s circle. After 21 years in New Jersey, a two-month layoff, and plenty of skepticism that he could still play at an NHL level, Brodeur signed with the St. Louis Blues last week. He made his first start on Thursday, looking merely OK in a 4-3 loss to the Predators. Then on Saturday, he earned his 689th career win, and first as a Blue, in a relief appearance against the Islanders.

And while it’s always nice to see a legend return to the spotlight, the whole Brodeur situation seems … odd. That starts with the image of him wearing a Blues uniform, which will take plenty of getting used to.1 But it goes beyond that, because the Blues and Brodeur don’t seem like they should be a fit.

For one, the Blues already have two pretty good goaltenders in veteran Brian Elliott and youngster Jake Allen. The latter has struggled somewhat, and Elliott is sidelined by an injury. He’s listed as week-to-week, and there have been conflicting reports as to just how long he’ll be out, but nobody seems to think that his season is in jeopardy, which means at some point the Blues are going to have three guys for only two spots.

It’s possible that the plan here is to just use Brodeur as a stop-gap until Elliott is back and then go forward with the Elliott-Allen pairing. But the rumor mill now says that the Blues could be looking to move Elliott, which would leave them with Allen and Brodeur to carry their Cup hopes.

That would seem like a questionable strategy, given that Brodeur hasn’t been all that good for a long time. Here’s a list of all the goalies who’ve played 100 or more games since 2010, ranked by save percentage. Note that Elliott sits at the very top of the list. Then check out where Brodeur ranks. Prepare to scroll.

Maybe the change of scenery helps. And there’s no criticizing Brodeur for wanting to come back; he deserves to go out on his own terms, and his legacy is intact no matter what. But from the Blues’ perspective, things get trickier. They’re one of the league’s better teams, well positioned to make a run at the franchise’s first Stanley Cup. They could have said the same last year, when they made a midseason blockbuster to land Ryan Miller. I liked that deal at the time, but it didn’t work out, and the Blues ended up spending a ton of assets on a few weeks of average-at-best goaltending. They’re not spending any assets on Brodeur, so the risk factor is lower. But the odds of success seem lower still.

Here’s hoping I’m wrong, both for the sake of the Blues and for a future Hall of Famer who deserves to go out with a trip deep into the playoffs, not to the waiver wire.

5. Detroit Red Wings (17-6-5, plus-18 goals differential) Our fifth spot has become a revolving door of teams with nice records that aren’t quite considered true contenders yet. That’s as good a description as any of the Red Wings right now, after they’ve won three straight to move into a tie for top spot in the division.

4. Anaheim Ducks (18-6-5, plus-6) Goals differential is a tricky thing. The Ducks continue to win, but they’re all close games; they haven’t had a victory by more than one goal since October 24. History tells us that that kind of success in one-goal games is unlikely to continue, but for now they’re a top-five team.

3. Pittsburgh Penguins (18-6-2, plus-25) They’ve reclaimed the division lead from the Islanders (based on a tiebreaker). Considering their long list of injuries and other health problems for key contributors, that’s pretty impressive.

2. Tampa Bay Lightning (18-7-3, plus-26) They remain the class of the Atlantic despite an embarrassing blip against the Blue Jackets on Saturday. Keep an eye on those Wings, though.

1. Chicago Blackhawks (18-8-1, plus-32) After six straight wins, they’re back on top in the Central and are now eyeing first place overall.

That Blackhawks win streak is even more impressive when you consider their opponents, with their five most recent wins coming against top teams like the Blues, Canadiens, Ducks, Kings, and Predators. That’s the kind of stretch that most teams look at and figure they’ll be happy with 10 or 12 points as a best case. For the Hawks to run the table — and to do it while outscoring their opponents 19-7 — is downright scary.

Chicago heads out on the road this week, with stops in New Jersey, Boston, and then Uniondale, for what should be a fun one against the Islanders. Some handsome experts picked the Blackhawks as this year’s Stanley Cup favorite, and after a slow start, they’re certainly looking the part. If you’re not there already, there’s still a little bit of room left on the bandwagon. Just be warned that the bench is getting kind of crowded.

5. Arizona Coyotes (10-15-3, minus-24) They’ve won just one of their last seven, and that came against the Oilers, so it barely counts. And now there are rumblings of yet another round of problems on the ownership front.

4. Columbus Blue Jackets (9-15-2, minus-27) The good news is that they’ve won three straight. But the injuries just keep piling up; you can add Artem Anisimov’s torn triceps to the list. Sometimes it’s just not your year.

2. Buffalo Sabres (9-16-2, minus-38) They’ve cooled off, losing two straight after winning six of seven. They’re still bad, but for the first time all year, they’re not topping our list of the very worst.

1. Edmonton Oilers (7-15-5, minus-31) Which leaves us with Edmonton. They beat the Sharks last night to snap their 11-game losing streak. That’s the good news. The rest of the season is the bad news.

On Friday, Oilers GM Craig MacTavish held a press conference to discuss the season so far. The whole thing played out predictably, with MacTavish starting off with a warning that “this availability is not going to satisfy anybody,” then trying to defend his own record while not so subtly throwing the previous regime under the bus.

The whole thing was a disaster. And yet it was probably still a good idea, because staying silent would have also been a disaster, and these days the Oilers are all about choosing from the least bad of many terrible options. Do they fire the coach? Give him a vote of confidence? Make a blockbuster trade from a position of weakness? Tinker with the fringes of the roster? Do nothing at all?

None of those ideas sound positive to Oilers fans, who are increasingly fed up with the entire franchise, from owner Daryl Katz on down. Media coverage is turning ugly. Even out-of-work hockey folks are getting their licks in.

There are positives to be found, but they don’t add up to anything. There’s still plenty of young talent, both on the roster and on the way. That doesn’t help. They’ve at least been more competitive over the last week or so. That doesn’t help. There is real evidence that this team is better than its record shows. That doesn’t help. Connor McDavid and Jack Eichel make this the perfect year to be awful. That will help eventually, but it doesn’t right now.

Maybe the Sharks win marks a turning point. But it’s increasingly looking like the eventual answer will be to burn the whole thing to the ground and start over, which is an almost unbearably frustrating thought for a fan base that hasn’t seen a playoff game in eight years. The Oilers are an absolutely miserable spectacle. Again.

• We have our first firing of the season, and it’s a bit of a surprise: Ottawa announced this afternoon that it has dismissed Paul MacLean. The move comes after a big comeback win last night, but with the team struggling overall and dropping out of the playoff race. It’s been just 18 months since MacLean won the 2013 Jack Adams as coach of the year

• We may have crossed a few wires when we were putting together this year’s Sharks. They’ve now lost to the Oilers once, the Coyotes once, the Blue Jackets twice, the Panthers twice, and the Sabres twice. They’re 14-4-2 against the rest of the league.

• Rookie defenseman Aaron Ekblad continues to look fantastic. The 2014 first overall pick had three assists in Saturday’s win over the Sabres, and is tied for the team lead with 17 points.

• Anaheim’s Corey Perry missed last night’s game and could miss more with a knee injury. He was on the receiving end of this low hit from Minnesota’s Keith Ballard on Saturday.

• The Bruins continue to struggle to push back into the Atlantic race. They dropped all three legs of their California road trip this week, but did close it on Saturday with a win over the Coyotes.

• The Canadiens have dropped three straight and six of seven. That includes Saturday’s 4-1 loss to the Stars, who snapped a four-game losing streak in which they’d surrendered five goals in each game.

• It was a tough weekend for the Canucks, who’d won five of six coming in. They dropped a pair during a trip through Ontario, first a 5-2 decision to the Leafs on Saturday and then a 4-3 loss to the Senators last night in which they blew a 3-0 lead.

• Jonathan Bernier stood on his head to help the Leafs to that win over the Canucks. Earlier, he also attended an event honoring Nelson Mandela and … oh. Oh no.

• The Wings’ 3-2 win over the Rangers on Friday was the 500th of Mike Babcock’s career.

• Finally, public viewing for Canadiens legend Jean Béliveau took place yesterday, with a state funeral planned on Wednesday. The Canadiens will play their first home game since his passing tomorrow night, and will no doubt do something remarkable to honor him.