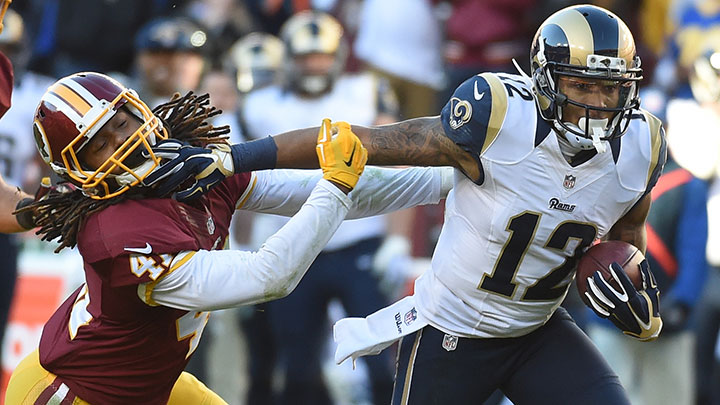 The Rams’ run over the past month has probably saved his job, but Fisher’s best coaching move yesterday came before the ball was even kicked off. St. Louis sent out six very specific captains against Washington: Stedman Bailey, Janoris Jenkins, Michael Brockers, Zac Stacy, Greg Robinson, and Alec Ogletree. Those just happen to be the six players the Rams netted from trading the second overall pick for Robert Griffin III in 2012.

The start of the season was a disaster for St. Louis, but with three wins in its past four, including back-to-back shutouts, the Rams have finally found some footing. And it really couldn’t be going any worse in Washington. No matter how it eventually goes — ditching Griffin and starting over, or Dan Snyder getting rid of Jay Gruden to preserve his quarterback’s future — Washington is in a bad way. Quarterback may not even be the worst of its problems. Washington boasts the league’s worst pass defense, which again got shredded, this time by Shaun Hill. The team is a mess, and the type of young talent that might be able to fix its problems stood at midfield before kickoff yesterday, wearing the wrong uniform.

While New England has mostly avoided the rash of injuries that destroyed its defense late last season, it has taken some hits at linebacker. Jerod Mayo is gone for the year. Dont’a Hightower is easily having his best season as a pro, but he’s missed three games, including last night. Chandler Jones was absolutely dominant, but hasn’t played since Week 7.

The Pats have been forced to rely on backups and complementary players at those spots for much of the year, and last night it worked out just fine. Jamie Collins had his best game of the season, with two sacks and plenty of help in the run game. Akeem Ayers — who, just as a reminder, couldn’t get on the field for the Titans — had a huge interception with San Diego up 14-13. And Rob Ninkovich — who played every defensive snap, again — continued to be the insanely consistent presence he’s always been.

It’s all just so painfully Patriots. They traded nothing for Ayers, and Ninkovich is also their freaking long-snapper. The difference here — especially when Hightower and Jones are in the lineup — is that New England is now getting contributions from its highly drafted defensive players. Collins is a successful second-round pick for Bill Belichick, which makes the Mississippi native a mythical figure at this point, while both Hightower and Jones are first-rounders, hitting their peaks a few years in. The additions to New England’s secondary have undoubtedly helped, but the surprises and developments at linebacker have done just as much to put the Patriots in the driver’s seat in the AFC.

Ben Roethlisberger had another monster day, and Antonio Brown continued his ceaseless march toward a 120-catch, 1,600-yard season. A lot of the damage came during a dominant fourth quarter, but that’s the type of offense the Steelers have put together: a running back who can go for 185 yards and a wide receiver who can suddenly rip off a 94-yard touchdown. When the Steelers are on, they look every bit as dangerous as any offense in the league. Their two games down the stretch against Cincinnati look like they’re going to go a long way in deciding the Steelers’ season, and Pittsburgh didn’t disappoint in Round 1.

On last week’s Grantland NFL Podcast, Bill Barnwell and I lamented the offensive game plan being given to Teddy Bridgewater: an endless string of receiver screens and short, quick passes seemingly aimed at protecting both the body and the ego of a rookie quarterback playing behind a shaky offensive line.

Well, for at least a week, I’ll have to back off those complaints. Norv Turner let Bridgewater loose yesterday against the Jets. He threw for 309 yards and two touchdowns on just 27 attempts, and he would’ve had a third touchdown had Minnesota not fumbled at the goal line (and recovered in the end zone). It was his best game since his debut start against the Falcons in Week 4.

The Vikings likely decided to give Bridgewater some leeway because they were playing the Jets secondary. Deep passes are harder to pull off when you’re scrambling for your life, after all, but it was nice to see a rookie quarterback respond after being told he could finally take the car for a spin on the highway.

Everyone in the NFC can start to worry … right about now. It’s been a rocky year in Seattle. The pitfalls that often come with a championship seemed to hit this team particularly hard. During the Percy Harvin trade/Marshawn Lynch leak/Russell Wilson leadership stretch, it felt like all of that, combined with the Seahawks maybe just not being all that good, would be enough to sink Seattle’s chance at defending its title.

After stonewalling the Eagles yesterday, those concerns seem like ancient history — much to the disappointment of everyone the Seahawks will face in the playoffs.

Seahawks DL Michael Bennett on what he saw from Sanchez: "The same thing everyone else saw — not much."

The Seahawks aren’t the offense-destroying group they were last year, but over the past few weeks they’ve gotten back some of the attitude that made last year’s defense what it was. For the first time in a while, the Seahawks are acting like the champs, and no one outside of Seattle wants to see that.

The NFC South, man. After getting hammered by the Panthers, the Saints are now only a half-game up on Carolina. Every time an NFC South team has a game like the Saints did yesterday, it’s tempting to start making funeral arrangements for their season, until you realize they’re still one game out of first place. (Division-leading Atlanta plays tonight at Lambeau, where Aaron Rodgers turns into Johnny Storm.)

Still, among all the awful games played by teams in this division, the Saints now have claim to the worst. Of all the horrible things you can say about New Orleans this year, “It resurrected the Panthers offense” is probably the worst. A week after the Vikings defense laid waste to the Carolina offensive line, New Orleans managed to hit Cam Newton exactly zero times. Jonathan Stewart had his best game of the season (and probably his career). And the Carolina passing game finally showed zip. This division will never make sense, and if (read: when) the Falcons lose tonight, our dream of a six-win team heading to the playoffs will remain very much alive. 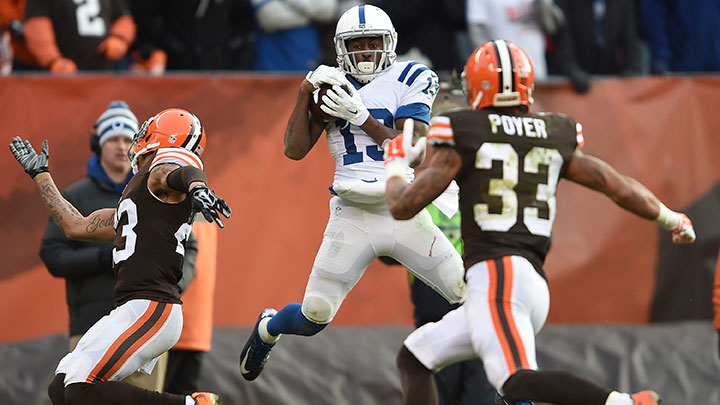 Quietly, the Browns pass defense has been among the best in football. They ranked sixth in pass-defense DVOA coming into yesterday — but that’s been overlooked because Cleveland’s run defense has been kind of a mess, and its quarterback situation has been even worse. All of that makes yesterday a perfect microcosm of the Browns’ season.

Cleveland gave Andrew Luck fits yesterday, picking him off twice and forcing him to fumble at the goal line before jumping on the ball in the end zone. Luck needed 53 attempts just to get 294 yards. The Browns also managed to hit the Colts quarterback 13 times. And it still wasn’t enough to keep their playoff hopes alive. Against a defense that was missing Vontae Davis, Brian Hoyer was brutal again, and the Browns couldn’t get much going on the ground against one of the league’s worst run defenses. The Browns’ ability to slow down opposition game plans is a great sign for Cleveland going forward — and a testament to Mike Pettine and his staff — but it’s not going to matter much until they figure out their offense.

It didn’t seem like things could get any worse for Tennessee, but here we are. The Titans run defense has been awful this season, but giving up 131 yards to the Giants and Andre Williams — he of the vaunted 3.3 yards per carry — is a special kind of terrible.

Tennessee’s struggles on offense aren’t all that surprising. It still hasn’t figured out its quarterback situation, and the high-price investments along the offensive line just haven’t worked out. The Titans just don’t do anything well on that side of the ball.

What’s happening on their defense is even more surprising. Tennessee finished 22nd in defensive DVOA last season, and although they lost Alterraun Verner in free agency, the Titans have really struggled against the run. There was always a chance the shift to Ray Horton’s 3-4 defense might take some time, but 13 games in, it seems like Tennessee is actually getting worse.

Both the Chiefs and Dolphins did a lot to sink their own playoff chances yesterday, but the frustration in Miami is clearly starting to bubble up. The Dolphins have looked like one of the better teams in football at times this year, and the numbers point to that as well. Miami ranked sixth in overall DVOA coming into this week, but with its loss to Baltimore, it’s very likely to miss out on the playoffs.

Considering all the talent it boasts, there are a couple of ways of looking at Miami’s middling record. The first: The Dolphins played a horrific schedule and have lost to plenty of other teams on the cusp of the playoffs. The second: Joe Philbin and his staff have failed to get the most out of the roster. The circumstantial first explanation is probably more likely, but yesterday wasn’t the first time the Dolphins have expressed displeasure with the coaching staff. Players on Miami’s defense were reportedly fuming about the game plan in the loss to Kansas City, and Philbin got into a tiff with defensive tackle Jared Odrick on the sideline yesterday. Both brushed it off after the game, tacking the exchange up to playing an “emotional game,” but no one can blame the Dolphins for being frustrated. Miami is too good to miss the playoffs, but that’s exactly what it’s about to do.