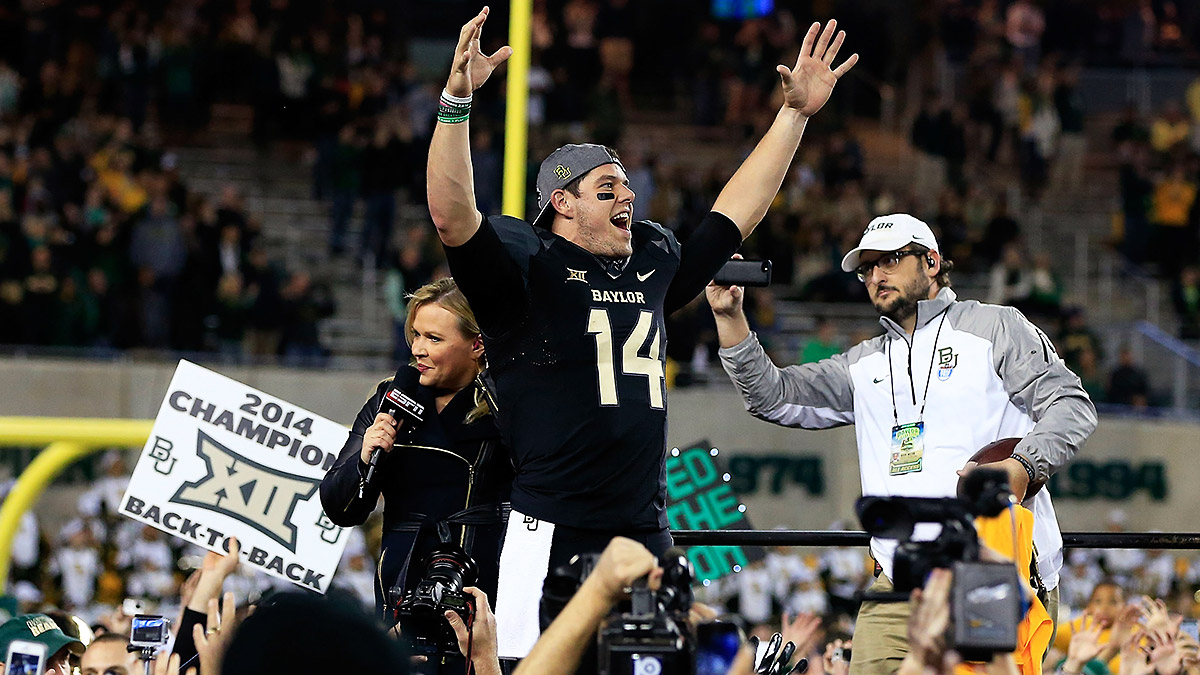 Celestial Recalibration of the Week: Now for Wrath, Now for Ruin

There’s the argument that it’s downright poetical to watch this or that old-money team roar back from midseason horror to exact terrible vengeance at season’s end. Then there’s the argument that poetry is for suckers. Whichever side of this hill you’re currently prepared to die on, also be prepared to give thanks for what we actually got, which is four killer teams stalking one another through the tall grass on national television. And remember, too, that as consolation prizes go, Peach and Cotton Bowls are pretty swell.

Would we be making this argument if Baylor or TCU had made the playoff instead of Ohio State? Absolutely, having chosen to alight on the sunny side of “look at all these amazing football teams we get to watch before EIGHT MONTHS OF TERRIBLE DUMB DARKNESS.” The onset of bowl season makes one really aware of the embarrassment of riches1 to which we’re about to be treated.

And lest we forget: Two games still have to fall the right way to give us that long, long-awaited Alabama-Oregon matchup. Look alive out there. 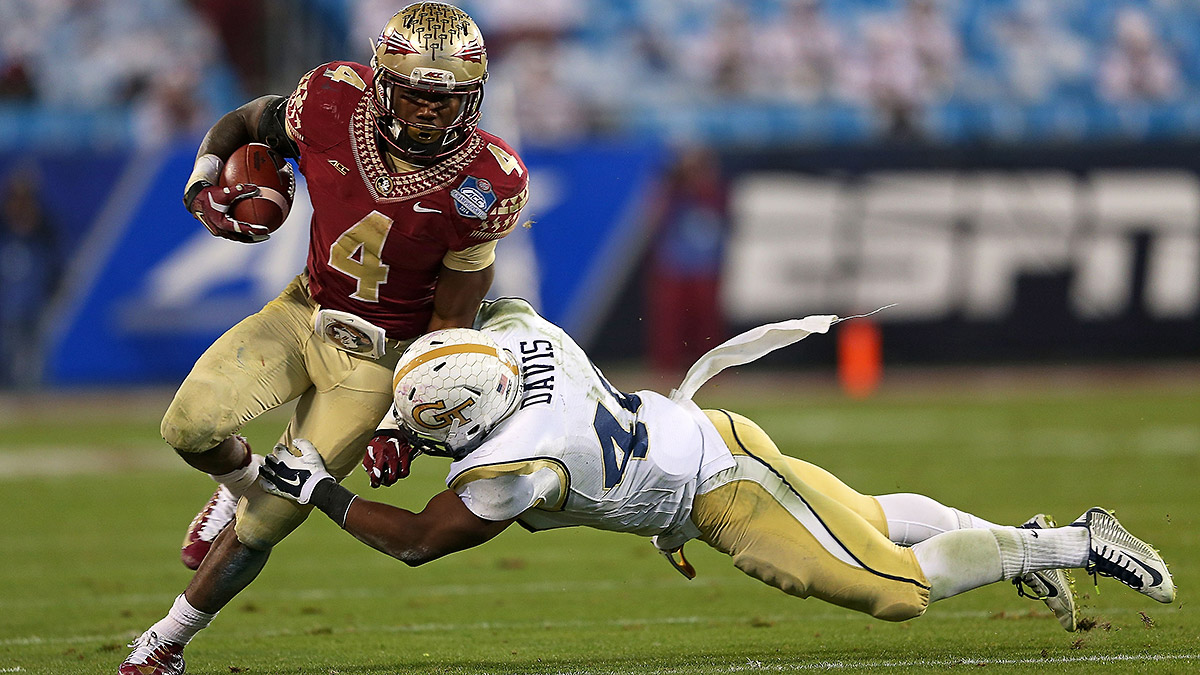 Here’s to Baylor’s starting quarterback, who took the long way around to his final year in Waco, battled broken back bones and a concussion over the course of the season to lead his team to a share of the Big 12 title, and responded to questions about the playoff with the immortalizing quip, “All I’m not paid to do is play.”

And here’s to Florida State’s freshman phenom tailback, who, with Karlos Williams sidelined against Georgia Tech, recorded a season-high 31 carries for a season-high 177 yards on the ground, including a stretch to end the first quarter and start the second in which he ran six times and caught one pass for a self-made 75-yard touchdown drive.

And here’s to Oklahoma State’s space-bending return man, whose 92-yard punt return scored a game-tying touchdown with 45 seconds to play in Bedlam. (See y’all same time next preseason to rank Oklahoma in the top five, right?)

Championship Week Coach Beatifications: Ohio State’s (All of Them? PRETTY MUCH)

Oh, man. Oh, mercy. Where to begin? With Ohio State nuking the hottest team in the Big Ten on both sides of the ball despite such vast swaths of youth at or near the top of the depth chart, in the process exorcising last season’s championship game horrors with a 59-point win that Vegas predicted to be a four-point loss? With Urban Meyer and OC Tom Herman coaxing 12 wins out of an offense that lost two starting quarterbacks since the preseason? With defensive coaches Luke Fickell, Larry Johnson, and Chris Ash scheming to put the Badgers offense down for a long winter’s nap? We’re staunchly agnostic on the matter of the Big Ten jumping the Big 12 into the playoffs, but now that we know the Buckeyes are who we get? This is gonna be so good. No matter what else happens, we’re in for some showstoppers in January. Get excited or go watch basketball.

Honorable Mention: Art Briles, who went full No-Bless-YOUR-Heart after Baylor’s defeat of Kansas State, a win that should’ve made the Bears outright conference champs, but didn’t because the conference decided not to let it. He also gave the country the disdainful aphorism “If you’re going to slogan around … ,” a reference to the Big 12’s “One True Champion” motto, and a turn of phrase for which we’re riding hard as next season’s version of [TEAM YOU DISLIKE] Ain’t Played Nobody, [TALK RADIO HOST NAME].

Ghosts, banished. Crusts, dipped in imitation garlic-butter-flavored substance. Not a bad night to be a Buckeye. Not too bad at all.

Please accept this sticker as the only thing you have to show for your choices.

The Pac-12 championship game was many things: a marvelous Heisman campaign finale for Marcus Mariota; a talent showcase for remarkable progress by the Oregon defense; a long-awaited stroke of vengeance for the Ducks against Arizona. What it was not was a quality football game, shifting from a can’t-nobody-do-nothing foot-shooting pageant early to a blowout so relentless it seemed to outpace the term “blowout” later on, with not much in the way of transition.

And yet we can’t help thinking it would have been more enjoyable — even for Wildcats fans — had it not been held in Santa Clara. Not to be all CAN’T WE JUST HAVE EVERYTHING IN THE ROSE BOWL ALREADY,2 but both teams and both teams’ fans deserved better than the sterile environment of Levi’s Stadium, at once too big and weirdly claustrophobic, with a kickoff timed to conflict with rainy Bay Area rush hour traffic on a Friday night. This setting served nobody well. Make it home-field advantage based on rankings or records, or do something else entirely. Y’all are supposed to be the conference of the future, and this was one boring-ass dystopia. Do better.

Honorable mention: UConn, you’ve revived a very specific tradition, and you shouldn’t be proud of yourselves, but it sure is something.

Let’s meditate on this for just a minute.

All you folks questioning Nick Saban and ridiculing the hire of Kiffin should show up at the football offices in person and apologize!!

He’s right, of course. And he’s not talking directly to us, or to you, or to any other sensible-minded folks who suspected OC might be Kiffin’s ideal job fit and that pairing those skills with the country’s premier collection of college football talent might lead to some form of on-field success.

But think about listening to him anyway. Just bathe for one minute in the idea of following through on this request, and of Saban being confronted with thousands of people who want to exchange human emotions with him. Imagine him thrust into an unscripted social situation at the end of a year in which he has already played one game extra beyond the bounds of the regular season, and has to play at least one more, maybe two, before returning to his ideal recruiting timeline. Be careful what you wish for, even with the best of intentions.