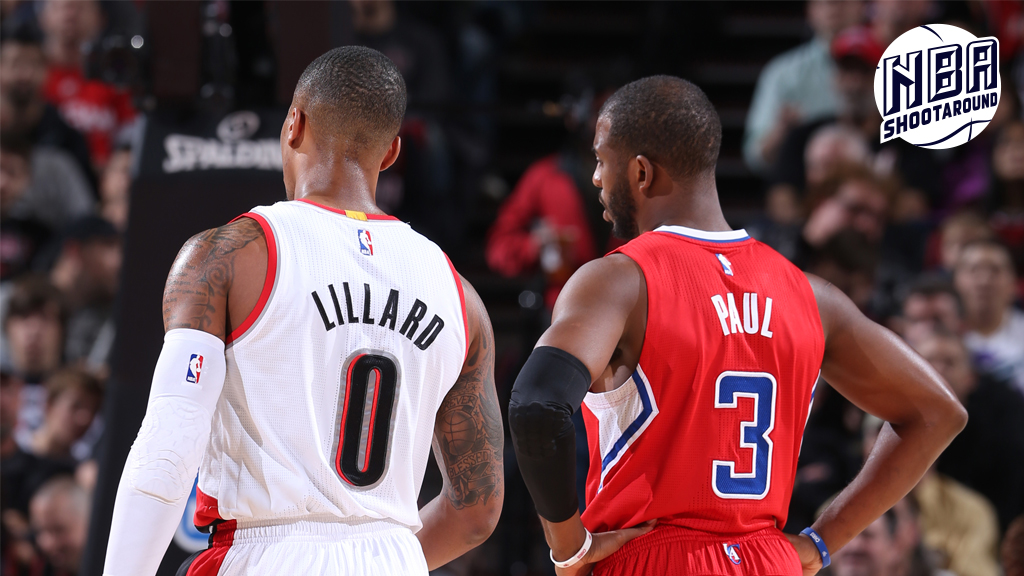 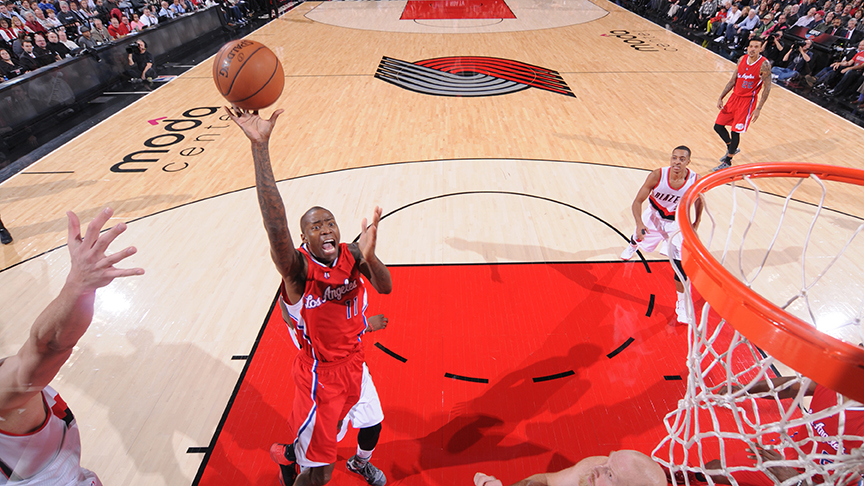 Jason Concepcion: If, for whatever reason, you haven’t been watching the Blazers all year: Yes, that was the Serial theme song being played during a fourth-quarter timeout while refs reviewed a Wes Matthews air ball. The Moda Center has been doing this for a few weeks. I can say, with certainty, that this marks the first time in history the theme song for a podcast about a brutal real-life murder case has been used by a team in any sport.

Here’s a fun thing about Clippers-Blazers from Wednesday night: The two best fourth-quarter assassins in the NBA played in the game. No player in the league has scored more fourth-quarter points than Damian Lillard, with 244. Behind him is Jamal Crawford, with 221.

Lillard scuffled to a 1-of-8 shooting night through three quarters before entering the fourth quarter and taking to it like a shark to a stricken seal. He hit his first three shots for the quarter, the last two being typical Dame deep-3 fire emoji. So he eventually woke up. Matthews went 0-for-4 in the fourth quarter, during which he hustled incredibly hard while making some pretty bad plays. Nic Batum, already having a bad season, looked more shook than ever, and LaMarcus Aldridge went 1-of-3 after carrying the Blazers offense for three quarters.

Meanwhile, Crawford was there with a couple of coffin nails, and Chris Paul went to the line for 10 free throws, and brought the hammer. Ballgame.

The Blazers getting a combined 8-for-34 out of Lillard, Matthews, and the rotten shell of a basketball player once named Nic Batum but somehow hanging in the game highlights something (another thing!) that’s great about the West this year: the interconnectivity of fate.

Over the summer, Spencer Hawes spurned the Blazers for the Clippers, forcing Portland to go with second-choice former Lakers bench sleeper Chris Kaman. It’s the depth afforded by Kaman that’s allowed Portland to continue chugging along, even after losing Robin Lopez and Joel Freeland to injury. Meanwhile, Hawes has largely disappointed, shooting 39 percent this season.

The Clippers won the game and are a top-three offensive team that is a little more than a point per 100 possessions worse on defense than it was last season. Meanwhile, the Blazers are much improved on defense — 104.7 DefRtg last season, 98.8 this season.

Depth and defense: two problems the Blazers had last season that the Clippers inadvertently helped them solve.

Wild Are the Wizards 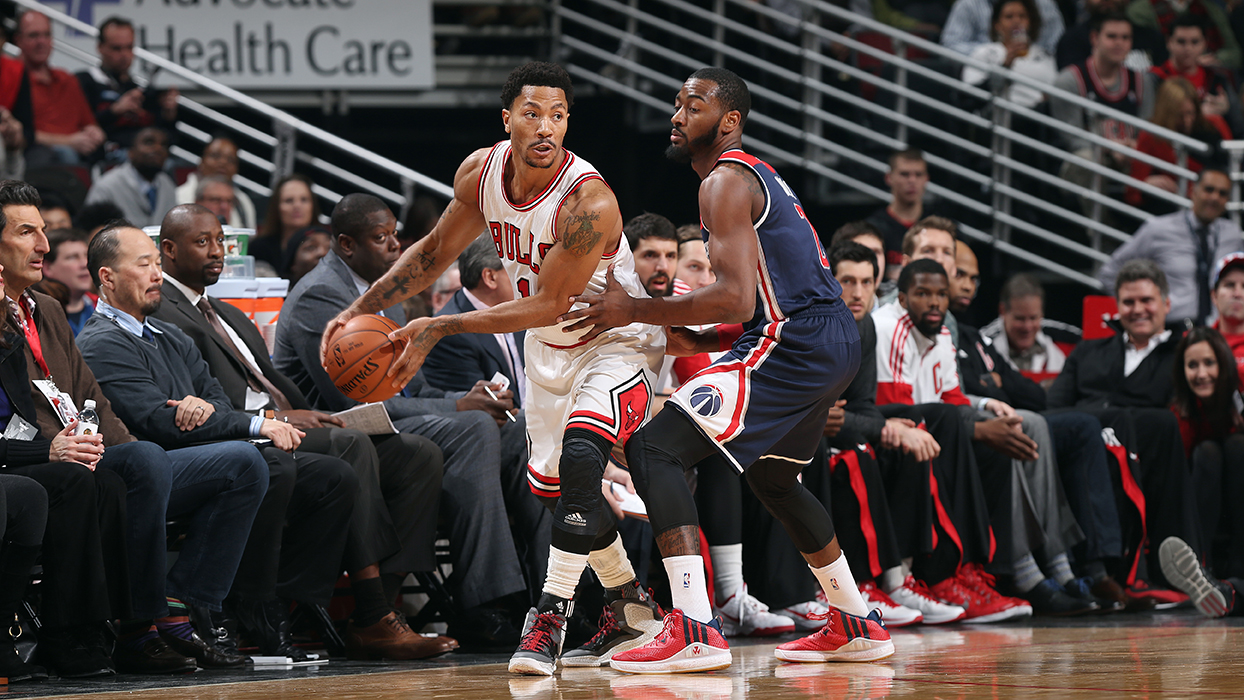 Claire Lobenfeld: Last night’s game at the United Center was Washington’s to win, once Joakim Noah was assisted off the court with a sprained ankle at the end of the first half. This was a fairly crucial game for both teams, as the victor would take sole control of second place in the Eastern Conference. Despite Pau Gasol having gone completely ham in the Bulls’ past two showings — including a career high of 46 points against the Bucks — the team needed Noah to control the tempo through the end of the game. Once the third quarter hit, John Wall and the Paul Pierce Plague put a pox on Chicago.

The Noah injury is representative of what is perhaps the biggest problem for the 26-14 Bulls. All the minor to not-so-minor injuries that pile up prevent Derrick Rose from defining who he is as a moderately healthy player this season, with the optimal group of talent surrounding him.

Speaking of Rose: Damn, what a first quarter. If there was anyone creating an edge for that team at the start of the game, it was him. He was taking jump shots! There was a buoyant layup where it looked as if he were flying over Wall to get to the hoop! But nothing was as impressive as his half-court lob at the first-quarter buzzer, which landed him at 17 points in Q1, tying his own career high.

Derrrrrrrrrrrick, he’s so pressed up. (Sing that to the tune of “Parents” by the Descendents, please.) 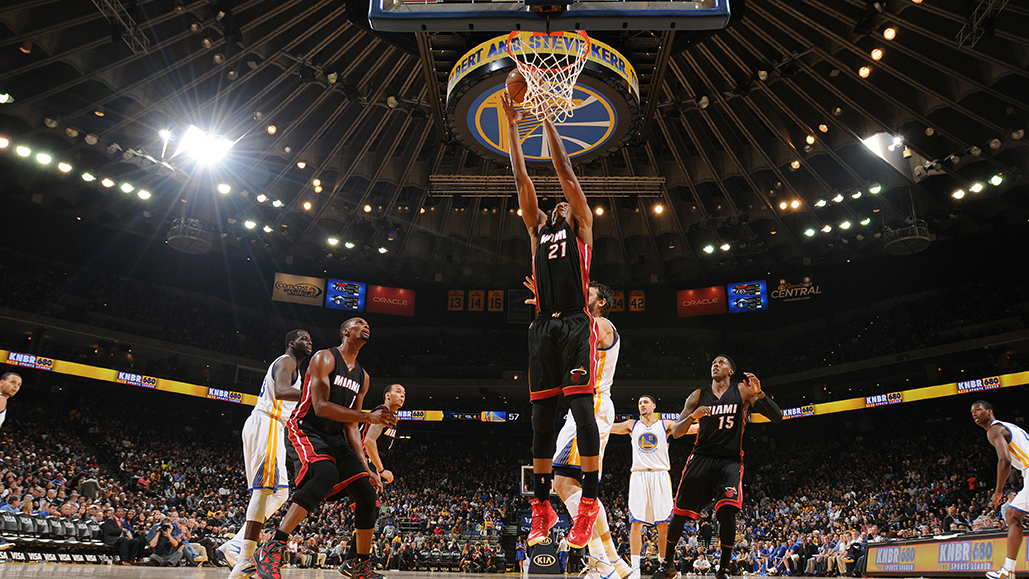 Brett Koremenos: To help shed some light on perhaps the craziest “out-of-nowhere” story since Linsanity, we put together a special Shootaround edition of “Who’s That Guy!?” for Miami’s Hassan Whiteside.

Who Is He? Hassan Whiteside, a 7-foot, 265-pound dunk machine who is now apparently the starting center of the Miami Heat.

Where Is He From? He was born in North Carolina. He went to college for one year at the basketball powerhouse that is Marshall University. After putting up solid, if unspectacular numbers during his lone season with the Thundering Herd, Whiteside declared for the NBA draft. That decision triggered one of the most surreal journeys you could imagine.

Whiteside was drafted in the second round in 2010 by the Kings, but spent most of his time either recovering from a knee injury or in the D-League. From there, things get weird. Whiteside spent 2012 and 2013 moving around from Sioux Falls to the Rio Grande Valley to Lebanon (yes, Lebanon) to China, back to Lebanon, and then back to China, after leaving his Lebanese team for safety reasons.

This past fall, he signed with the Memphis Grizzlies (twice) and was waived (twice) before landing with the Iowa Energy. He played in three games before being signed by Miami. Got all that?

Whom Will His Game Remind Me Of? JaVale McGee. Seriously.

Stats: Since December 27, when Whiteside began receiving regular minutes for the Heat, all he’s done is average 11 points, 9.1 rebounds, and 2.9 blocks in just 22.1 minutes per game — including last night’s double-double (10 points, 12 rebounds) against the best team in basketball.

His Game in Three Clips: Whiteside’s role is to do a lot of this …

… while also occasionally doing a little bit of this …

So Hold Up — If This Guy Is Doing All of This, Why Didn’t Another NBA Team Give Him a Chance Much Sooner? Whiteside’s talent was never in doubt. But when he was coming into the league, there were serious questions about his maturity and ability to understand the intricacies of the game at the NBA level. ESPN’s Chad Ford noted a couple of things about Whiteside’s pre-draft interviews that were less than flattering:

A number of teams reported to me that their interviews with Whiteside were rocky. I can understand why. In the first 15 minutes or so I spent with him one-on-one he projected a confidence that bordered on naïve arrogance. He compared himself to everyone from Dwight Howard to Hakeem Olajuwon (with whom he spent a week training), complained about where I had him on my mock draft (No. 14 to the Rockets) and was insulted that our scouting report didn’t have more on his 3-point shooting ability.

So what has changed with Whiteside? That’s the million-dollar question. Maybe it’s as simple as a young kid growing up. Or maybe Whiteside had a reality check during his time in Lebanon. Perhaps it was a combination of both. All we know is, he’s in South Beach now, so enjoy the show while you can. 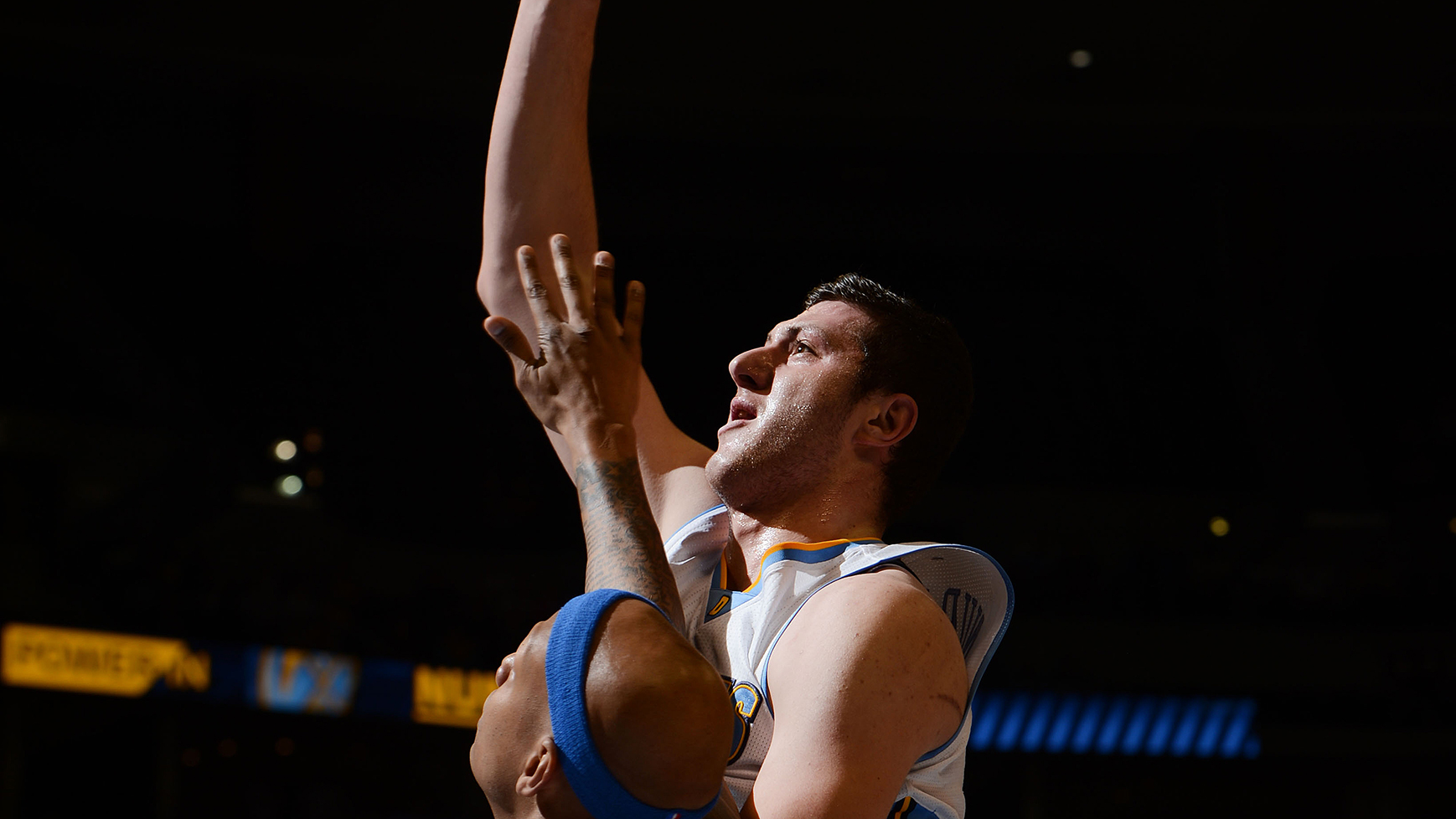 Andrew Sharp: I won’t lie to you. Mavs-Nuggets is one of those midwinter games that makes you stop and say, “Shit. It’s a long season.”

But that’s why people like Jusuf Nurkic are important. They make this worth it. On Friday night, Nurkic was in Sacramento talking shit to DeMarcus Cousins and almost-but-not-quite breaking out the Jordan shrug. Wednesday it was back to Denver. He had seven points, nine rebounds, two blocks, one goaltending block off the backboard reminding Devin Harris who rules the jungle, and one double flop.

It was great. I was switching back and forth between that and the Wizards-Bulls game, but almost every time I came back to the Nuggets, the announcers were talking about Nurkic.

One example: “[Referee] Bill Kennedy calls a foul on the Nurk, and the Nurk … gives a smirk.”

Another: “I had a chance to ask Rick Carlisle about Jusuf Nurkic, and he took a pause and said, ‘He’s a very entertaining player.’”

Nurkic's father is 7 feet tall and 400 pounds. They just said so on the TV

A Word Problem, No Multiple Choice 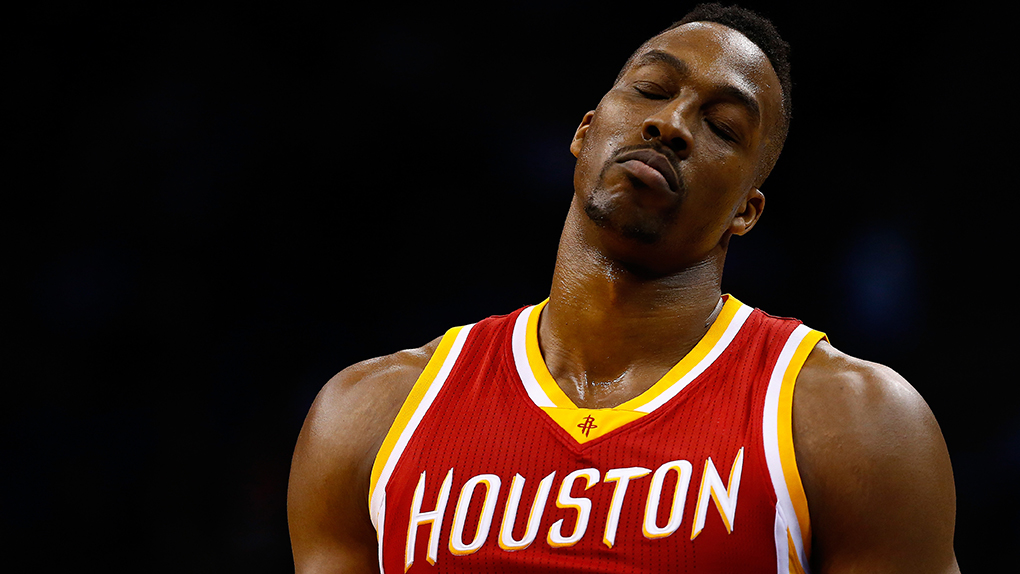 Danny Chau: Last night, Dwight Howard, Kenneth Faried, and Omer Asik combined to shoot a perfect 19-for-19 from the free throw line. Asik tied his career high in free throws made without missing, with four; Faried tied his, with eight; Dwight was one off his career high, with seven. Before Wednesday, those three had hit 57.3 percent of available free throws this season. If we charitably claim that all three players had a 57.3 percent chance of knocking down one free throw, what was the likelihood of all three of them achieving perfection 19 times on the same night? 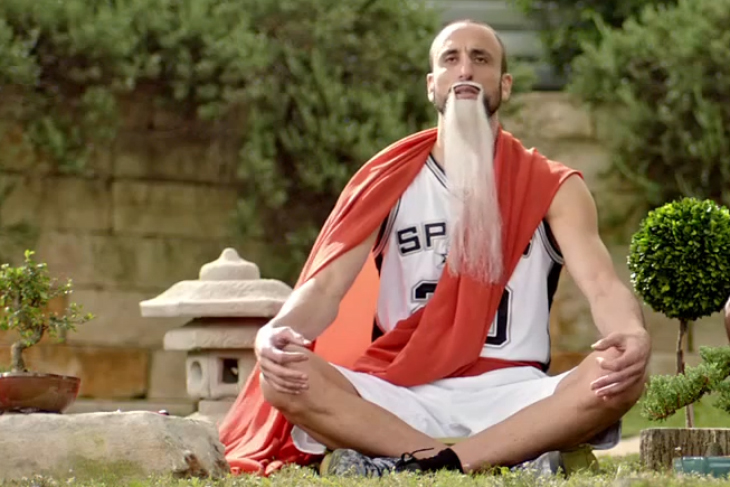 Kirk Goldsberry: One cannot comprehend Manu through reason, even if one reasoned for ages.

Who knows how many nights like this we have left? But if this turns out to be Manu Ginobili’s final NBA season, Wednesday might go down as one of his last great performances. Down in Charlotte, the graying guru from Bahía Blanca put up 27 points in just 24 minutes, to help the middling Spurs get past the suddenly upstart Hornets.

It was a gorgeous exhibition for an old guy on the wrong end of a back-to-back. He outwitted younger dudes. He made crazy diagonal pocket passes. He drew shady whistles. He invented basketball geometries that had never before existed. Ginobili is a national treasure.

Best Play of the Year (Of the Week)

Amos Barshad: Only the great jams — the ones that cut deep, the ones everyone knows the words to — get cover versions. No one bothers covering the ones that don’t stick. Congratulations, Trevor Booker, you’ve volleyballed your way into history. Bonus points for the Jordan shrug follow-up. Fire-breathing automaton Kobe Bryant maybe never got it, but the Jordan shrug was great because it demarcated a genuine bit of astonishment. It was not a faux-shrug. Trevor Booker’s Jordan shrug, similarly, came from such a place of “Did I really do that?” For one, that shot was preposterous. For two, he’s Trevor Booker!