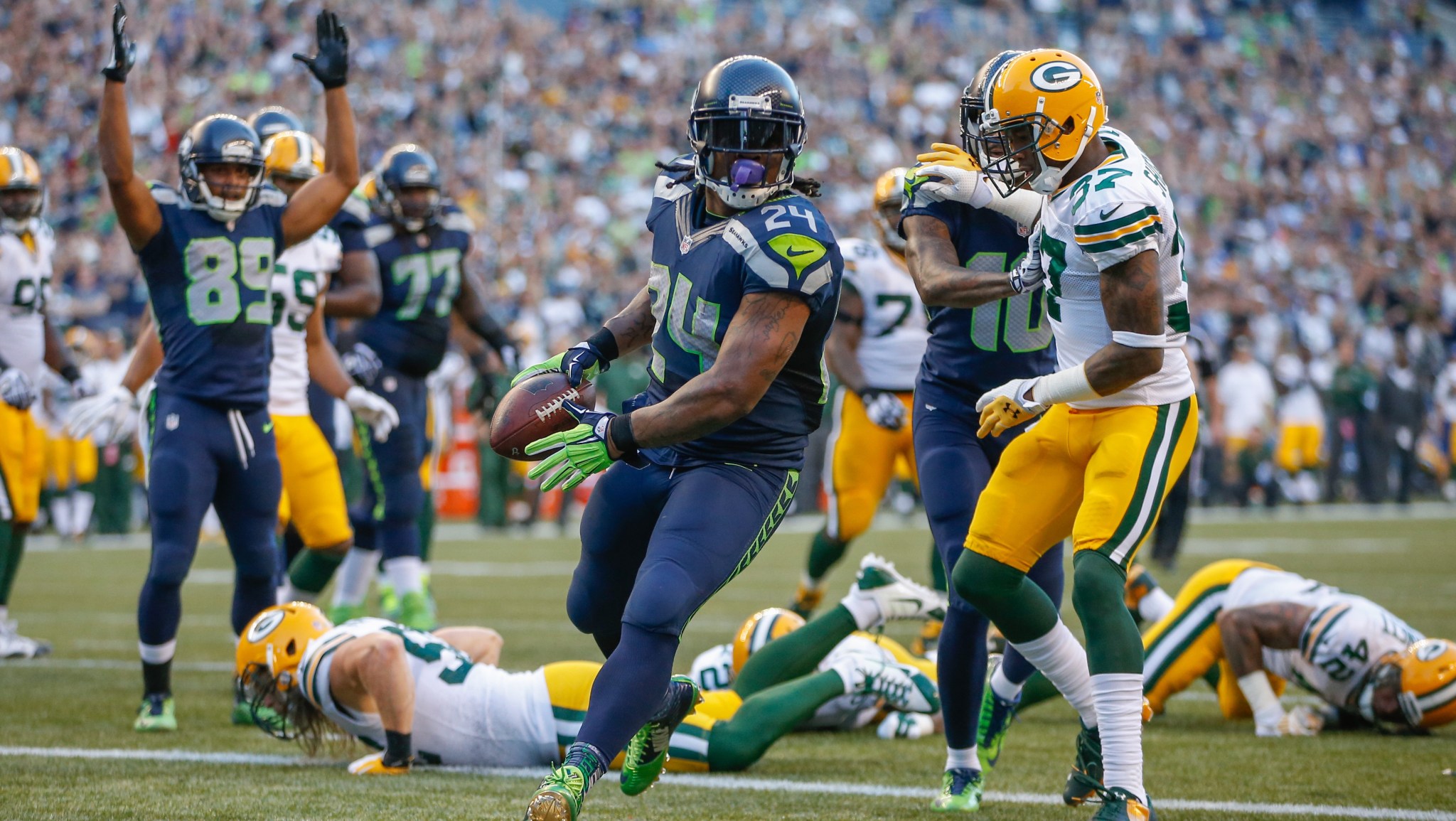 Greetings, degenerates. I normally skip the preamble to this blog and just go right to my crappy prop picks — but because they were so far short of crappy last week I find the need to gloat. Let’s recap: Patriots to score over 28 points (EASY), Seahawks lead at half and win the game (EASY), Demaryius Thomas to score the first touchdown (EASY-ISH). My only loser was hysterically and ironically painful … Dez Bryant to score a touchdown. Oh, and I pegged Channing Tatum for Best Supporting Actor in 22 Jump Street, which doesn’t seem like it’s going to pay off — but I’m still relatively hot, so join me as I move on to Championship Sunday with a great deal of overconfidence:

Packers under 20.5 points
Nine weeks ago. That’s the last time the Seahawks allowed more than 20 points in a game. It’s also around the last time Aaron Rodgers was able to complete the 40-yard dash over the span of a three-day weekend. The Legion of Boom has yielded an impressive eight points per game over the last seven games. Love this one. 8,000 jermajesties1

First touchdown scored Packers-Seahawks: Davante Adams (28/1), Doug Baldwin (11/1), Marshawn Lynch (+350)
If you remember the first prop from my January 15 post about the Seahawks-Packers game, you’ll recall that I don’t like Green Bay to score a whole lot. But 28/1 is too much to pass up when the rookie from Fresno St. is so in tune with Rodgers. Ultimately, I’m thinking pass interference on what would have been an easy TD reception by Baldwin followed by a Lynch plunge into the end zone. 2,000 jermajesties each

LeGarrette Blount over 45.5 yards rushing
It’s hard to believe that Jonas Gray (37 rushes, 201 yards, four TDs vs. Colts in Week 11), who is neither injured, involved in any drug scandal, nor accused of violating a family member’s rights while using a paint ball gun is unmentioned by the NFL’s Prop Association of America this week. You can’t find him anywhere. You CAN find LeGarrette Blount, who fits the bill for at least one of the above qualifications. The Patriots must realize that they can run on this Colts team, and those yards have to come from somewhere. We’re going OVER. 7,000 jermajesties

These two beasts have combined for 21 touchdowns this year. There’s good value in the above odds. 2,000 jermajesties each

5/2 odds that Bill Belichick unveils another never-before-seen offensive formation this Sunday vs. the Colts

My money is on a play where Belichick himself reports as the only eligible receiver, and hops on Gronk’s shoulders to catch the game-winning touchdown pass thrown by Vince Wilfork, who starts out lined up making snow angels on the hashmarks.

Odds on which phrase/one-word response Marshawn Lynch will employ during his postgame interview this Sunday:

These bizarre interviews get about 8 percent less funny every week. Might be time for Marshawn to go Beast Mode on hiring a comedy writer.

Over/under one day, nine hours before we see the news headline “Dolphins Tale a Little Fishy” as it relates to Rob Konrad’s story about being lost at sea

This is actually my crazy friend Brad’s joke. Brad calls bullshit on a dozen or so major news stories a year and usually ends up being right about 85 percent of the time. The fact that former Miami Dolphin Rob Konrad has given conflicting reports about the distance he swam to shore as well as near shark and jellyfish attacks means we may be chalking another one up for Brad sooner rather than later. If only we could really bet on this stuff for real, Brad would be able to afford cable and not be forced to listen to 1940s audio recordings of The Shadow on his Walkman in order to put himself to sleep. I wish I were joking.

375,000/1 odds that after botching the Golden Sharpie Award presentation during halftime of the NCAA title game, either I or Jimmy Kimmel Live sidekick Guillermo gets asked to present at this year’s Academy Awards

If you look closely, you’ll see that Guillermo and I clearly possessed the bronzed phallic trophy, took three steps with it, switched hands, and 40 seconds later made a football move to transfer it to my cousin Jimmy. We were robbed and America knows it.

@BillSimmons the @TheCousinSal is back on form. 3 scores in a row. Nice pick. Haven't lost your mojo quite yet!

Yes, on Good Morning America, I picked the Ducks to win Monday. But that’s only because I didn’t want to come off like a lunatic to the lovely Robin Roberts with my “at some point in the game, either team will score three consecutive times” prop lock. That bet actually won twice. I should get to keep the Golden Sharpie Award for that. I guess I tried to.

@TheCousinSal how excited are you that you and @BillSimmons can bet against a Jack Del Rio coached Raiders next season?

Not quite as excited as Raiders owner Mark Davis — who reportedly hit up the local Hooters immediately after the Del Rio hiring. Del Rio is 68-71 lifetime as a head coach. I guess seeing .500 is not on his bucket list.

@TheCousinSal i'm a lifelong diehard #LIONSFAN and even I know you got hosed on that one.

@TheCousinSal I'm a Packers fan and even I think that's a catch all day long. #JackholeRule

@TheCousinSal I'm a Giants fan & that call was bizarre. Announcers all talking as though it were an easy call. Football is officially lame.

Forget the rule, how it’s written, the spirit of the game, any of that. New criteria: If a single Giants, Lions, and Packers fan thinks Dez made the catch, THEN DEZ MADE THE EFFING CATCH!

@TheCousinSal Is there any reason NOT to put the entire ranch(es) on a Hawks-Pats Championship Sunday teaser??

Hmmm. I can’t think of one at the present time. But you’ll have to check in for my final decision tonight on SportsCenter (10 p.m. PT — Friday 8 a.m. –11 a.m. ET). I’ll be the one on the right furiously poking holes in my Dean Blandino voodoo doll.