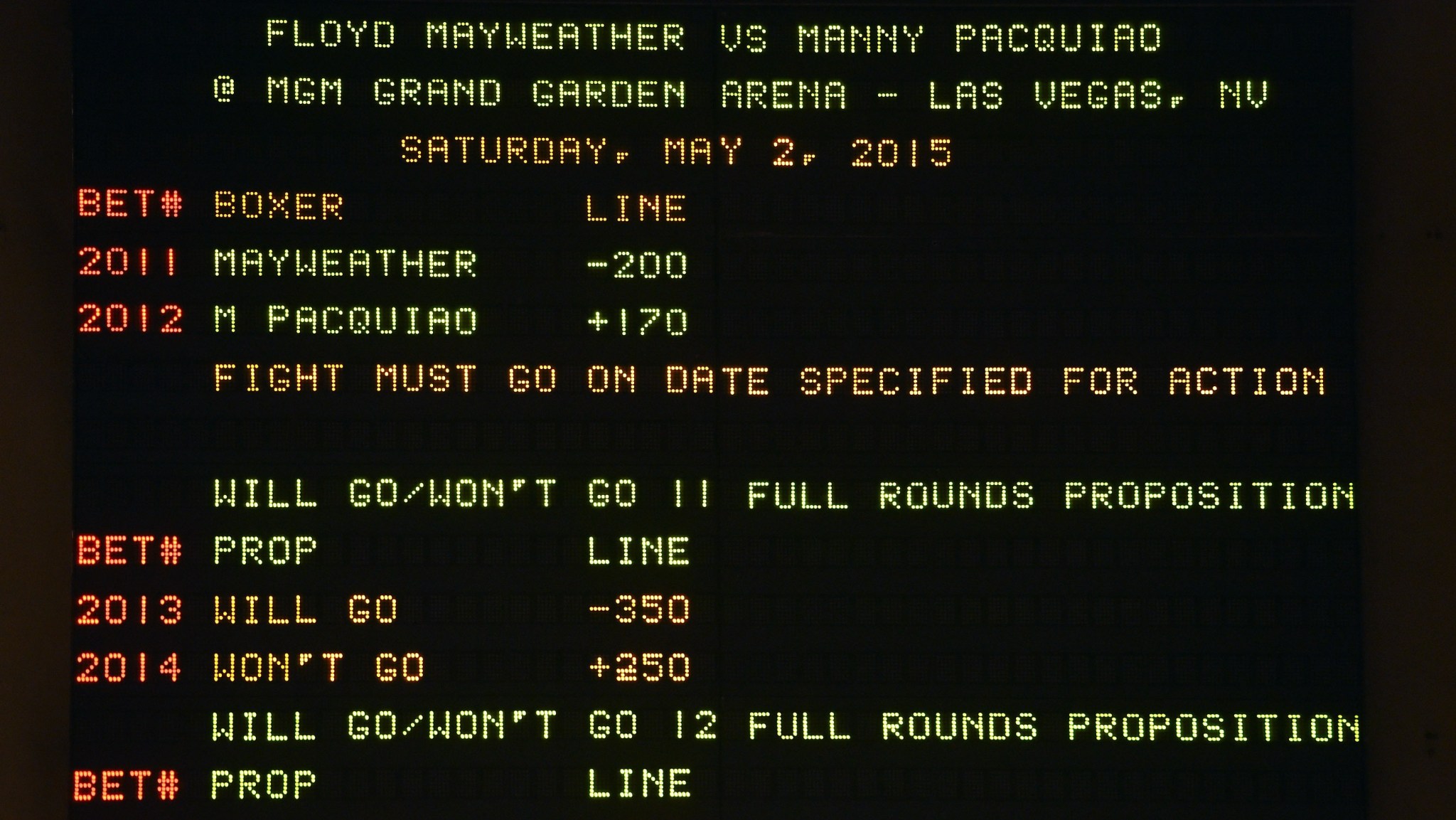 Hello, degenerate gamblers. Well, it’s here … Pacquiao/Mayweather Part 1. After almost a decade, these two were finally able to get it together and are prepared to offer the public the most anticipated fight since back in 1985, when half of Elwood Middle School emptied out to watch me and Billy Schmauch duke it out by the varsity baseball fields. Back then, the fight enthusiasts were treated to a six-minute draw after we both quit from exhaust– OK, Schmauch got the better of me, but I swear he had sandpaper wrapped around his wrists. Never mind — the point is, we’re about to witness the fight of this relatively short century, and everyone you and I know is hoping to make a buck off of it.

Reportedly, $80 million will be wagered legally. Most of it from desperate people trying to cover the cost of the exorbitant pay-per-view fee. In any case, I’m here to guide you toward making the right decision on the 22nd-best gambling weekend of the year (sorry — it can’t possibly be in the top 21 weeks, since there are no NFL games on the slate). Here’s who I like:

I don’t mind telling you that I’m rooting for Manny Pacquiao. He just seems like a better guy. He’s always nice to me when he comes on my cousin Jimmy’s show. He’s funny. He sings. Most importantly, to my knowledge he doesn’t Skype with soldiers in Afghanistan boastfully carrying his laptop around his mansion to give them a tour of his garage loaded with gazillion-dollar automobiles (yes, Floyd actually did this on HBO’s 24/7 a few years back, and — let’s face it — probably a lot of times off camera, too).

I would be delighted to see Manny erase the only zero Floyd cares about more than the ones populating his green bundles — that being the one in his loss column. The problem is, it’s not going to happen. As a pay-per-view buyer of every single fight involving these two fighters over the past eight years, I can tell you that at this point, there’s a marked difference in their skills.

Back in 2008-09, Manny was untouchable. In an 11-month span, he kicked the crap out of Oscar De La Hoya, Ricky Hatton, and Miguel Cotto. None of these went the distance. That’s when everyone wanted to see Manny and Floyd fight. And that’s when Mayweather did the smartest thing he ever did — postponed the superfight for seven years by accusing Manny of steroid use.

This strategy led to three very important ends for Mayweather:

• Vilifying Manny for not agreeing to be drug-tested before a fight.

• Making tens of millions of dollars fighting handpicked opponents who weren’t going to hurt him.

And let’s face it — they have. Pacquiao has slowed down a bit. His legs are heavier. He’s not as effective at throwing punches from those ridiculous angles.

Manny spent these seven years trying to find worthy opponents and then attempting to win a feud that never should have been against Timothy Bradley. And then … the shot heard around Kibawe. That monster Juan Manuel Marquez knockout punch. Sure, Manny has looked solid since then, but you can tell he fights differently. You’d have to after being laid out the way he was. He’s not letting that happen again, and for that reason, he fights with an unsettling tentativeness.

Mayweather, on the other hand, has looked about as machinelike as possible. He’s been handpicking opponents and winning big on the scorecards without ever really coming close to getting hurt. Yes, there was a slight bump in the road vs. Marcos Maidana (if you’re willing to call a less-than-dominant — but still convincing — win a bump in the road), but I’m willing to chalk that up as “I’m bored and this style messes me up a little, but c’mon, we all know who’s better here.”

Final analysis: Floyd is as slick as they come. He’ll start slowly like he usually does, then win all the middle rounds and split the last two to gain a unanimous 116-112 decision. Boring pick, I know, but gambling is about making money, which never, ever becomes boring.

NOTE: Please, please, please put a few jermajesties1 on the draw at 10/1. When the fight was announced in December, the stalemate saw 24/1 odds, but then people remembered that fights are manipulated more than we want to think about and bet it down to barely double digits. Not to mention that there’s way too much money in a subsequent fight or two for the evildoers to not potentially have their hands in this decision.

Does anyone remember the names of the corrupt judges who screwed up Bradley-Pacquiao? Lewis-Holyfield? Whitaker-Chavez? No — of course you don’t. I don’t, either, which proves that boxing is able to survive and move on after tampering with a big fight every now and then. You’d be foolish to think this one’s immune to the same shenanigans.

Here’s some other crap that probably won’t happen Saturday but is fun to imagine.

At this point would anything surprise you?

Seriously, how great would it be if after every round, a different group of schlubby MGM security guards rolled out a wheelbarrow with $7 million in cash? The next round doesn’t begin until Floyd and his team count it out Benjamin by Benjamin — after which (and not a second before) the brutality continues. This absolutely MUST be a clause in the rematch. Who in their right mind wouldn’t love to watch this for 16 hours straight?

7/2 odds Pacquiao wins by default after Mayweather breaks a rib laughing at Manny’s theme song — which will be played during his entrance.

Maybe that’s the plan here. Make Floyd weak enough so that he can’t catch his breath — then pounce. If you haven’t had the pleasure of hearing Manny’s new masterpiece, here it is. Enjoy, and you’re very welcome.

I’m just kidding. He seems like a really sweet man. Do yourself a favor and carve out a couple of minutes to watch this interview with Jimmy Kimmel Live’s very own Guillermo and try to decipher what Floyd Sr. is saying. It’s not easy to figure out — but I looked it up. Tryptonite is the ore from a radioactive turkey that makes you fall asleep between the second and third NFL game every Thanksgiving.

If I were Manny, I’d demand a drug test for Tryptonite.

Over/under 17.5 MGM keno machines ruined during the inevitable post-fight melee in the lobby

I will be at the fight. Don’t worry — I already have an escape plan. The plan is to not escape. At least for an hour and a half or so — which should be just enough time for everyone to brawl, shake it off, grab an Uber, and retreat to their natural habitats. In the meantime, I’ll be the sissy boy cowering in his seat refreshing fantasy baseball scores. If anybody has a better/safer plan, I’m all cauliflower ears.

Over/under 8 minutes and 35 seconds into the fight before the friend of your buddy, who was the only one at your party to not chip in for the pay-per-view, loudly gives their thoughts on how much they hate boxing because it’s too barbaric

Make sure to remind them that there are more Real Housewife deaths each year than there are in the ring. Not true, of course, but it may keep them quiet for a few minutes while they search for this statistic on their smartphone.

Who will Floyd Mayweather thank first in the post-fight interview?

1000/1 odds Manny Pacquiao enters the ring wearing a robe that spells out “IF YOU CAN READ THIS, YOU’RE NOT FLOYD MAYWEATHER”

Just do it, Manny. What’s the worst that could happen, someone tells Floyd what it says and he punches you in the face for it?

That’s that. Enjoy the fight.

Gritting and Grinding to the NBA Playoffs' Second Round: What We Can Expect Now