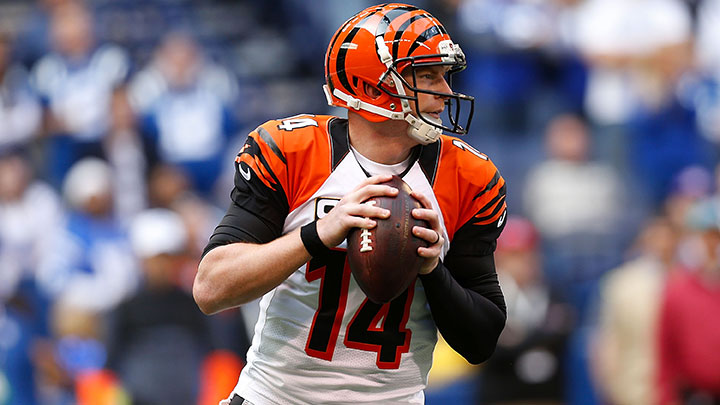 There’s not a ton for Arizona to gloat about offensively this year, except for the emergence of Floyd, who has accumulated seven-plus targets in four of his last five games — including an eight-catch, 153-yard performance last week in San Francisco. Carolina is 23rd in the league in completions allowed. I know, it’s a weird stat, but I found it, and it’s real. So use it to your advantage. 3,000 jermajesties

You’d better dig out your favorite parka, because I’ve decided to team up with Mother Nature and make it rain jermajesties all over my readers. If field conditions in Pittsburgh are as dismal as they’re supposed to be, we may see the latest installment of the storied Baltimore-Pittsburgh rivalry decided by Brad Wing and Sam Koch. They punt for a living … apparently. 2,000 jermajesties each

Andy Dalton will NOT throw an interception (+180)

Picking Andy Dalton to not throw an interception in an NFL playoff game is like picking a poisonous blackberry off a shrub and feeding it to your infant child. OK, maybe it’s worse, but something tells me this is where the Red Rifle gets it together. The Indy defense hasn’t forced an interception since Week 15, and getting an otherwise solid QB with everything to prove at almost 2/1 odds is good value. I’m assuming Dalton is watching tape of the great Charlie Whitehurst to see how it’s done. 3,000 jermajesties

If this die-hard Cowboys fan has his way, Dallas will be ahead by enough so that it doesn’t matter when Calvin Johnson has a repeat performance of his 14-catch, 329-yard day last season. As successful as Big D has been this year, they have trouble covering big receivers — and this particular big receiver resides on the covers of all the video games the kids like. I’m playing the over 96.5 and hoping 96 of them come in garbage time. 5,000 jermajesties

Over/under 3.6 ounces of “love lost” between Ravens and Steelers this Saturday night

Is “love lost” still measured in ounces or did we convert to the metric system yet? It’s all so confusing.

The Kansas City Chiefs will carry over/under 0.5 wide receivers on their 2015 roster

The touchdown-less streak by Chiefs wide receivers is still one of the most baffling in recent history. Imagine if an NBA team went an entire season without draining a 3-pointer or if an NHL team went a full year without a power-play goal. Or if, after viewing the movie in a theater, no one in the country endorsed The Expendables 3. If the Chargers didn’t need the game last week, I half-expected them to allow Dwayne Bowe to walk into the end zone untouched like a 6-year-old soccer team does for the kid on the opposing squad who had spent the entire season on the sidelines burning ants with a magnifying glass. I’m revealing a lot about myself right now.

Over/under 74,506.5 times a member of the media refers to Ohio State head coach Urban Meyer as a genius this week

I’ll go over and add myself to the group. Not enough will be made about how risky Meyer’s play calling was at the end of the first half last night. On second-and-10 with 19 seconds left, wide receiver Evan Spencer was called on to make the perfect throw to Michael Thomas. If the ball is just a bit underthrown, the pass is picked off, the Buckeyes lose all momentum, OSU goes into the locker room down 21-13 and probably blows the game. BALLLLLL-ZZZZZ! Now how much are we betting on an Oregon–New England–Seattle three-team teaser?

Let it be known that this extremely biased Cowboys fan finds it outrageous that Ndamukong Suh is permitted to play football on Sunday and even more outrageous that anyone of virtue believes he wasn’t purposely shifting all his fat weight on Aaron Rodgers’s ankle last week. The man should be suspended for forcing us to learn how to pronounce his name let alone for his blatantly criminal on-field antics. OK, I feel better now.

Yes indeed, @JCal916. It just took me 45 minutes to type a response to your tweet. Mainly because I couldn’t stop applauding.

Thanks for this, @seanismoney. I’ll be sure to have this stat at the ready on my iPhone to flash in the sportsbook clerk’s face the next time he gives me grief about asking for extra drink tickets.

Thanks @TheCousinSal for the prop bet tip, got Antonio Brown at 21/1 for most receiving yards down here in Australia. Made a nice $210.

Winner!! I forgot about all those preseason prop locks I gave out in late August. Maybe we should take a look at how the rest did … Just looked. Let’s just rejoice over the Antonio Brown pick and call it a day.

@TheCousinSal I paid for ALL of my Christmas gifts PLUS a bachelor party bourbon tour w/ your picks last few weeks. Thanks buddy.

Good God is that @TheCousinSal 's music? No, just an armored truck unloading cash after another week following his picks (3-0)!

I've never been so glad to live near Mexico where casino sports gambling is legal! Thanks @TheCousinSal pic.twitter.com/TOW3pPNWuU

Catch me on SportsCenter with the very charming Kenny Mayne tonight at 11 ET, when I’ll attempt to continue my relentless attack on bookmakers around the globe: 15-0-3 against the spread over the last six weeks. Still haven’t figured out how to make Kenny laugh, though.

We Went There: Hanging With a Billionaire for Washington’s (Wild) Winter Classic