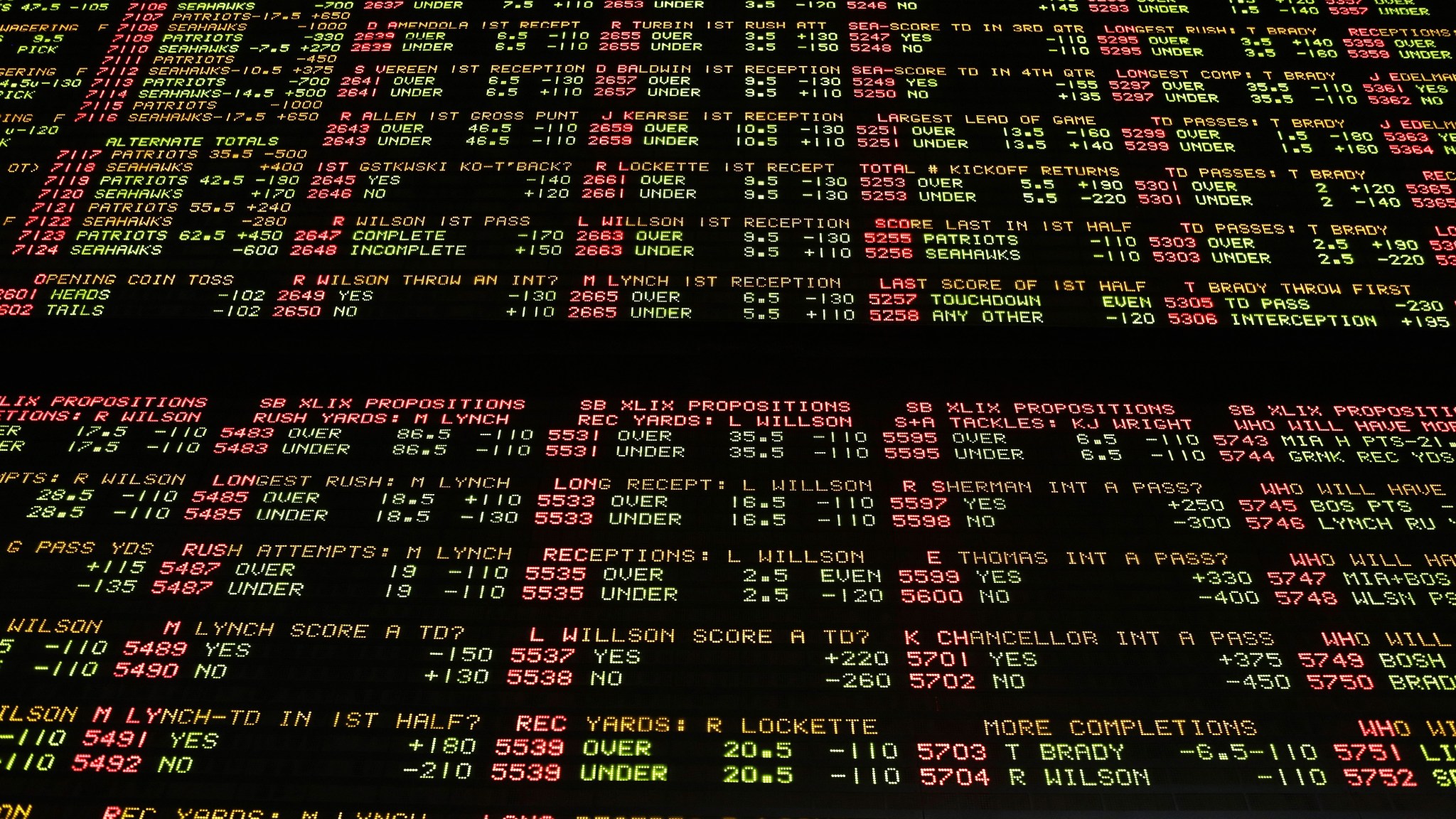 Hello, degenerates. Are you as excited about this weekend as I am? Not a chance in hell. Every year at this time I print out the 21-page PDF of all the Super Bowl props and then spend three or four sleepless nights poring over the various pigskin possibilities. I feel like a cross between a war strategist in The Imitation Game and a certified mental patient.

Nonetheless, I am now fully prepared to bury your bookie one more time this season. And by one more time, I mean exactly one time. Let’s try to forget that I lost tens of thousands of jermajesties in my prop blog picks this year and REMEMBER that I offered the Seahawks first score to be a safety (50/1) as one of my top suggestions before last year’s big game.

My apologies if you’ve heard a lot of these during my B.S. Report appearance with Simmons the other day. It’s important to recycle. Let’s do this!

Will either team score three straight times? YES (-185)
This wager is becoming as easy to win in football as it is in basketball. It has hit five of the last six Super Bowls, both conference championship games, and in the College Football Playoff semifinals (both games) and final. I almost don’t want to tell you about it for fear that the line will shoot to over -250. You know what — forget I said anything. Let me just have this one for myself. 10,000 jermajesties1

The Patriots WILL convert a fourth down (+150)
The New England Patriots are the greatest team ever when it comes to converting fourth-and-1s. Period. I have no numbers to support this other than counting up the dozens of remote controls I’ve smashed over the years watching the Pats convert fourth-and-1s when I have money on the other team. You know what they say: If you can’t beat ’em, join ’em in jermajesties. Actually, no one says that. 5,000 jermajesties

Tom Brady’s first pass is a completion (-185)
I’m not positive about how the rest of the game will shake out, but what I am sure of is that Brady will connect on his first throw. Even if it’s a shovel pass to Shane Vereen, Gisele’s old man will be hell-bent on proving to the world he has no issues early on with the weight of the regulation Super Bowl ball. The vig is heavy, but not as heavy as your wallet after you cash in on this gimme prop. 6,000 jermajesties

There will be NO Gatorade bath following this year’s Super Bowl (4/1)
One of these years a team is going to be so caught up texting selfies to their loved ones that they will forget to dump Gatorade on their coach. Everyone from then on will realize how dumb the tradition is and we will never see it again. I’m saying it begins this year. Not to mention — we’re in the height of flu season, so it’s reasonable to believe both coaches have threatened the lives of their players if an unauthorized dousing were to occur. 1,000 jermajesties

Pats by 7-10 points (7/1)
Seahawks 7-10 points (+750)
This is a fun bet that’s 80 percent likely to be alive in the fourth quarter. Perfect for degenerate gamblers who still haven’t decided which team they’re rooting for by kickoff but are dying to lose a couple paychecks on Super Sunday. 2,000 jermajesties each

PROP LOCK OF THE YEAR

Michael Hoomanawanui over 6.5 yards receiving (+165)
And with that Hoomanawanui now joins greats like Henry Hynoski, Gary Russell, and the great Virgil Green in my obscure Super Bowl player Hall of Fame. Why the over? Well, it’s +165 for a guy who went for 15 yards at Buffalo, 23 at Green Bay, and 43 a couple weeks ago against the Ravens. It’s not out of the realm of possibility that Gronk has to sit a few series after getting dinged up by a helmet-to-helmet collision with Chancellor or one of the other fierce Seahawks defenders. Not to mention that the guy has “WIN” and like 17,000 other words in his name. But if you want to bet against a former All–Cornbelt Conference selection, be my guest. 1,000,000 jermajesties

I’d pay top jermajesty to see the Fridge and Katy Perry do anything resembling the Super Bowl Shuffle. I’d even settle on a variation of the Chicken Dance.

Odds that Go Daddy and Budweiser split the cost of a 30-second spot and stick a half-naked Danica Patrick on a Clydesdale.

Over/under 4.5 minutes into the game before some a-hole at your party tells everyone to quiet down because he wants to hear the commercials that have been online for three days

Sadly, that a-hole will likely be me.

-18,000 that my friend Daniel and I get in a back-and-forth text/email battle arguing about whether he won or lost the various ridiculous prop bets he forces me to turn in for him

Here’s what will happen: The woman from Frozen will come in right around her designated over/under (two mins and two seconds) when, on the word “brave,” NBC will switch to the shot of fighter pilots screaming through the sky. A few seconds later, the cameras will cut back to show the cartoon crooner headed through the tunnel. Every article the next day will say that she timed out at over 2:02 except for one blogger who writes for a website that won’t be around for Groundhog Day claiming the rendition went under. This is the one Daniel will hang his hat on. Or somehow Daniel and only Daniel will locate a tinge of purple in the green Gatorade. Or maybe he’ll detect that one of Belichick’s sleeves are cut when they’re clearly intact. I’m getting agita just thinking about it. At this point, it might just be easier for me to buy Daniel a condo in Antigua or somewhere where gambling is legal and no one speaks English. Please forward listings if you have any.

Anyone who has a child who’s 7 or younger knows what I’m talking about.

Over/under 15,000,000.5 people will recognize Idina Menzel’s voice from Frozen and then stab themselves in the face with a chicken wing bone

Anyone who has a child who’s 7 or younger and has not already gone through the embarrassing horror of stabbing themselves in the face with a chicken wing bone knows what I’m talking about.

Marshawn Lynch (-2.5) crotch-grabs over Katy Perry crotch-grabs
Not the greatest of Skittles commercials, but it’s just a matter of time before we see a rainbow stamp tattooed on the football pants in the area covering Lynch’s genitals.

(NOTE: After I gave out this fake and raunchy prop bet on the B.S. Report, sportsbook.ag has decided, in my honor, to post this at (-120) for both participants. I am both delighted and ashamed to have this much power in the gambling world.)

Oh and one more for LeGarrette ….

This is why I’ve always been a proponent of sticking road maps in Funyuns bags.

Please tell me I wasn’t the only one to hate this movie. There’s absolutely no way anyone connected to that flick could expect the audience to understand what Owen Wilson was saying to Joaquin Phoenix in any scene they appeared in together. My crazy friend Brad calls it “Incoherent Vice.” It’s early, but so far in my book that’s the joke of the year.

750/1 odds that during his postgame speech, a concussed MVP pulls a Travolta and thanks Adele Dazeem

Vinnie Barbarino should forever be stuck with “5” and “5” in a Super Bowl square pool for that blunder.

Let me be the first to point out that the man is a genius. He went to Stanford, you know.

Every guy terrified of Richard Sherman (for no reason)

Special thanks to all 752.2 Sullys for driving Smitty to the emergency room.

More than 1,500 words in and only one deflated-ball joke? That’s astounding restraint on my behalf, if I say so myself.

Over/under $3.50 I will receive on eBay when I sell the wacky Vegas shirt I wore last night at the Westgate Sportsbook in a segment seen on Jimmy Kimmel Live where I made $10,000 in prop bets for the MaxLove Project

You can get the full list of these charity prop bets (you’ll recognize many of them) on my Twitter feed later this afternoon. I haven’t figured out how it happens, but there are 3/5 odds I end up costing Super Max and his charity a boatload of money.

Even odds that the referees blow a call at the end of the Super Bowl when a receiver on either team makes a spectacular grab, takes three steps, transfers the ball from one hand to the other, and lunges for the goal line (implying a football move) and then two weeks later after nonstop discussion and analysis of the play, the guy covering that receiver confirms it’s a catch.

That’s that. Enjoy Super Sunday and be sure to watch SportsCenter late Friday night for my Super Bowl selection. ESPN is letting me give it out live on the air, so FCC violation odds are holding steady at -17,500.

Yours in jermajesties,
—Cousin Sal