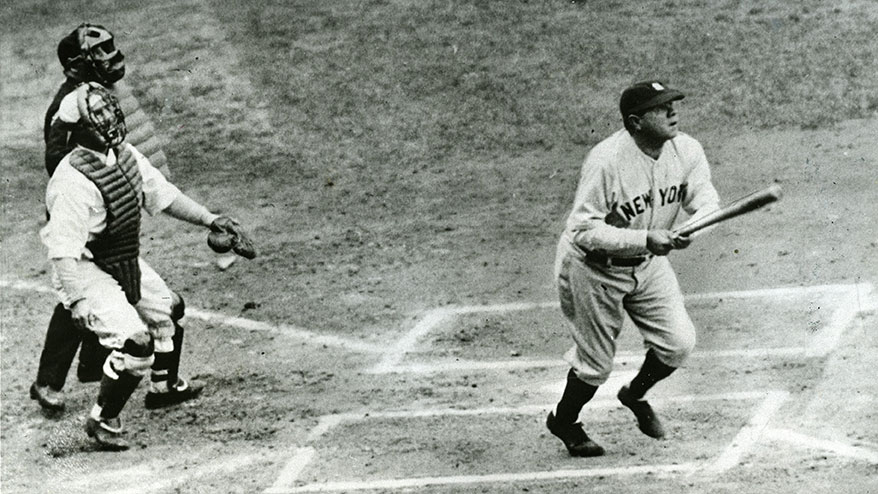 The first image you see is Dazzy Vance — a tight shot of the right-handed flamethrower, twisting his body in an exaggerated windup, then firing a pitch in super-slow motion.

The camera cuts to Ty Cobb, standing at home plate, feet shoulder-width apart, clutching the bat with his trademark split-handed grip, top hand choked way up. He lunges toward the pitch, stretching so far forward that his left knee nearly hits the ground.

Then, the Babe himself. Ruth rocks on his back foot, eye on the ball, waiting to explode into his terrifying home run swing. He pops one pitch up, rolls over on another, and fouls a third one back — always looking like he might corkscrew himself into the ground through the force of his swing.

At last, we land inches from the face of Walter Johnson. The Big Train looks like he’s exerting almost no effort, as he sidearms the ball toward the plate. As his 3,509 strikeout victims knew, when Johnson slingshots a pitch toward you, you’re a dead duck.

Put all these images together, and you have two minutes and 28 seconds of breathtaking footage, extreme close-ups of four of the greatest players of all time.

The Major League Baseball Film and Video Archive’s contents date all the way back to 1905 and contain more than 200,000 hours of footage.1 During a recent trip to the MLB Productions headquarters in Secaucus, New Jersey, I watched as dozens of technicians worked on converting thousands of games into digital format.

Working in a small room filled with screens, dials, and a mysterious mini closet, Jon Rose was scrutinizing a game when I walked in. It took about 0.00001 seconds to realize he was watching vintage Pedro Martinez! Not just any Pedro game, either. This was the pitcher’s August 29, 2000 masterpiece at Tropicana Field, a game in which Martinez fired a one-hit shutout with 13 strikeouts and no walks. At any given point during the day, Rose will be hunkered down in front of a screen, digitizing seven games at once. Once those games have all gone digital, they become infinitely easier to share with various partners, such as MLB Network and ESPN, regional sports networks, or various other third-party users. Rose doesn’t really need to watch the game on his screen all that closely while the machines capture footage. “But it’s Pedro,” he says, “so why not?!”

In the spirit of “so why not,” here are four more clips I got to watch while roaming the halls in Secaucus:

From the oldest piece of footage in the entire archive, these images show the 1905 New York Giants raising their pennant-winning banner from the year before.2 Seeing Christy Mathewson at the height of his powers is amazing if you’re a baseball junkie. Also, those sweaters with the big “NY” script across the front are incredible, and I want 10 of them right now.

The origins of the Giants footage are unclear, according to Nick Trotta, Major League Baseball’s director of library licensing. The library gets its material from a wide range of sources. On any given day, Trotta and his staff might have their eyes locked on an eBay auction for an incredibly obscure bit of footage or simply have something dropped in their lap by a big baseball nerd who just discovered a treasure trove in grandma’s attic.

“There are gaps,” Trotta says. “And the gaps as well as the strengths of the library mirror the history of mass media. We go back a hundred years; the first baseball footage is within the first decade of the first moving image. Before videotape, a way to preserve things that we had on TV was to take a huge film camera and roll it right up to the screen and just roll film on what was airing on TV.”

The first game I remember attending was on August 1, 1982. That day, 51,353 crazies packed Olympic Stadium — no, really — to see two of the best pitchers in the National League, Steve Rogers and Joaquin Andujar, face off with major NL East implications on the line. The Expos won, 5-4, and for at least a short while I became convinced that packed houses and playoff atmospheres happened all the time at the Big O. (I was a very gullible child.) The video above comes from what Trotta calls the sweet spot of MLB’s archive: good, old-fashioned (post-Kinescope) game footage.

OK, now a face you can recognize if you’re under 40. This is teenage Bryce Harper, playing for the junior-college Southern Nevada Coyotes. All the signature Harper traits are there, from the explosive swing to the Ultimate Warrior–style full-face eye black. The footage was shot by MLB crews on April 30, 2010 … for no good reason, actually, other than just to have it. The scenes did eventually make their way into an ESPN special called Bryce Begins, though, which aired exactly three years later, on April 30, 2013.

Finally, it’s audience participation time! Trotta acquired this footage from one individual’s private home-video collection last year, and he’s been obsessed with nailing down the details ever since. We know the basics: It’s vintage spring training footage, Ted Williams appears multiple times, and there are shots from at least two different Florida ballparks. The rest gets fuzzy: We know there are some brief shots of Reds players, we can guess that it’s taking place sometime in the 1950s, but when exactly? Where exactly? How many other batting stances, pitching motions, and faraway faces can we make out?3

These are the mysteries that come with unearthing such old footage. And that’s the joy that comes with walking through these halls. When two minutes of strolling can yield everything from a Roberto Clemente tribute to 1995 Cleveland Indians highlights, obscure Arizona Fall League games to vintage Pedro, you know you’ve found seamhead bliss. Just as long as you accept that you’ll never hit like Babe Ruth — no matter how many times you watch super-slow-motion shots of him swinging for the moon.