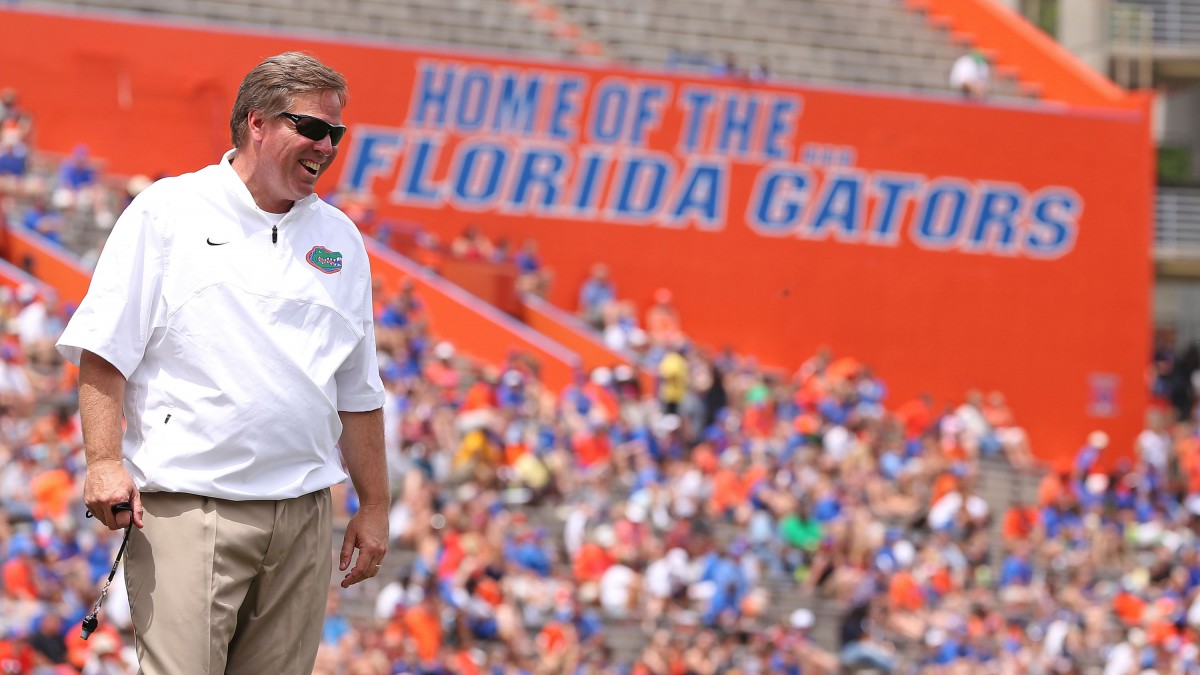 You can feel the summer sliding away in certain parts of SEC country. The shimmering heat is still there, but its edges are muted. The grass is slowly crisping up. Fall is on its way, pushing football season in front of it. Not that you can tell in Florida, where nothing much ever seems to change this time of year: The daily temperature highs remain steadfastly tacked above 90 degrees, summer storms still reliably threaten every afternoon activity, and a persistent front of elevated football expectations hovers over the Florida Gators.

Gone from the Swamp is the maligned Will Muschamp, back to Auburn and to his better-suited role of defensive coordinator. In comes Jim McElwain, sturdy branch of the Nick Saban coaching tree and architect of a three-year renovation project1 at Colorado State. McElwain’s staff inherits a roster thick with potential and faces an SEC East schedule that can get gnarly — but is at least, mercifully, not the SEC West. He also inherits the force multiplier of It’s Florida. Gators football at its best is rife with talent and eminently watchable, and joyous to the point of eating its own in fits of glee.

It’s hard to know what to expect out of Gainesville this year, but peak Florida football won’t be on the menu. From a pure entertainment-value standpoint, the Muschamp hire seemed like a smash. Here was the sideline showman who jumped up to bear-hug his defenders after highlight plays like a ferocious clip-on koala, paired with a program where four-star recruits can be plucked like low-hanging backyard fruit. But on the other side of the ball, his regime do-si-doed offensive coordinators and suffered frequent upheavals at quarterback. After a 7-6 inaugural season, Muschamp’s team went 11-2 in 2012, only to veer wildly off course in the following campaigns, to first 4-8 and then 7-5.

The available data on McElwain’s Gainesville inheritance is as murky as swamp water, capable of concealing anything from discarded license plates to all manner of biting things. “I don’t think of it as much of a rebuilding as a remodeling,” McElwain said. “What I mean by that is there’s a lot of talent — and Florida is one of the top jobs in America, no doubt about it — but in the recruiting phase, sometimes I think we’ve just relied on being Florida. Because it’s a wonderful place, it’s a great university, all of those things go along with it. But now we need to catch up a little bit.”

While the Gators are making up ground, especially on offense, look to the defense to shoulder the load once again in 2015. On paper, this unit promises to be so much fun, especially given what’s happening on the points-generating side of the ball. Of course, the defense will be without the services of defensive end Dante Fowler, the third pick in this year’s NFL draft, and defensive tackle Darious Cummings, but it returns far too much experience to believe it won’t stay afloat. The most urgent concern lies with the linebackers — if Antonio Morrison ends up missing early games, the Gators will be without last year’s three most productive players at the position. Most of the team’s highlight-reel potential appears to reside in the defensive backfield, where the vast majority of last season’s safeties and corners return. Train your eyes on Vernon Hargreaves III, boyish breaker-up of 13 passes in 2014. Every time an opposing team tries to get cute with its aerial attack, chances are you’ll like what you see.

Aaaaand then there’s the offense. In this preseason learning environment, with redshirt freshman Will Grier and sophomore Treon Harris currently leading the quarterback race, there’s a little bit of a Muppet Babies vibe happening. “Part of our job as coaches is to figure out what they do well,” McElwain said. “Obviously in our [quarterbacks’] case, the most important thing is, throw it to our colored jersey.”

So if current practice reports hold and Grier wins the starting job, the Gators will be trotting out a redshirt freshman quarterback, handing off to Kelvin Taylor2 and a bunch of guys we know next to nothing about,3 and throwing to Demarcus Robinson and an otherwise relatively unknown receiving corps. But those question marks are all dwarfed, literally and figuratively, by whatever’s going to be happening on the offensive line. The new staff inherits one (1) offensive lineman with starting experience, Trip Thurman, who was held out of spring ball to allow him to recover from a shoulder injury. Asked in July how many first-year offensive linemen might be in line for playing time, McElwain estimated, “At least four, probably, and then one of the kids that transferred in, who graduated from Fordham. Which, as soon as he sees an SEC speed-to-power pass rush he’s going to end up right in the quarterback’s lap.” The transfer player is Mason Halter, who’s a former FCS All-American but who still figures to face a culture shock going toe to toe with SEC defensive lines.

“Oh yeah,” said McElwain, asked whether he thinks Halter will see playing time. “It’s either him or you.”

It’s still disconcerting to think of the Gators having to dig themselves out of a hole in the first place. The trope that Florida football didn’t exist before 19904 is a powerful one, particularly for sports fans raised in an era saturated by the sustained success of Steve Spurrier and the two national titles under Urban Meyer. Their bodies of work helped breed the conventional wisdom that crafting a winning program should be easy at a place like Florida, but remember that in the modern history of the game, only those two coaches have enjoyed prolonged success.

And whenever we talk about winning in college football being a simple matter in certain places, it’s worth recalling what a curve that’s grading on in this sport. Despite the SCOREBOARD arguments that determine our collective emotional well-being when the clock hits 00:00, even the easier programs to maintain are complex, temperamental machines. Apart from all the little inanities and insanities that come along with every major head-coaching job, there are hurdles specific to winning at every school, which in Florida include lackluster facilities5 and sharing oxygen with not just SEC contenders but in-state rivals Florida State and Miami — to say nothing of UCF. Heading into his first season in a power conference coaching gig, nobody seems more cognizant of how far he is from the reality of It’s Florida than McElwain himself.

August is a dumb time to make predictions, of course, but with this team more than most, staring at numbers won’t make answers materialize. It’s a safe bet that Florida football, as an institution, will thrive in the future. But it’s going to be a minute before that happens, and in the immediate forecast, the Gators are staring down a September slate riddled with trap games that could set up to make them look very silly. The season opens with New Mexico State at home, a game that is at least mercifully scheduled to kick off at night. Next comes a visit from an East Carolina squad that’s reloading on offense but is markedly more stable in the sixth year of Ruffin McNeill’s leadership.6 SEC play begins in Week 3, with a trip to what’s going to be a very, very angry Kentucky team, and continues back in Gainesville in Week 4 versus Tennessee. (If you thought last season’s 10-9 atrocity was a crime against the game of football itself, just wait until this year, in this early slot, when probably neither team will have patched together a cohesive offensive line yet!) Florida could be 4-0 at the end of this first month, or 1-3, and neither would be all that surprising.

This season could be rough on the emotions of the Gators faithful, and on a program that brought home two national championships within the past decade and now finds itself reduced to divisional also-ran. But while Florida spins its wheels in the Swamp for this next little bit, it wouldn’t behoove any of its opponents to forget that however low to the ground this team is traveling, whatever level of solace it must find in being the best dang ankle biter it can be, those jaws remain powerful enough to snap legs clean off. Did you know that gators can climb trees? Scares the hell out of me every time I think about it.