Woodson Redux: USC’s Adoree’ Jackson Wants to Front-Flip Into Your Heart, Win the Heisman, and Then Go to the Olympics 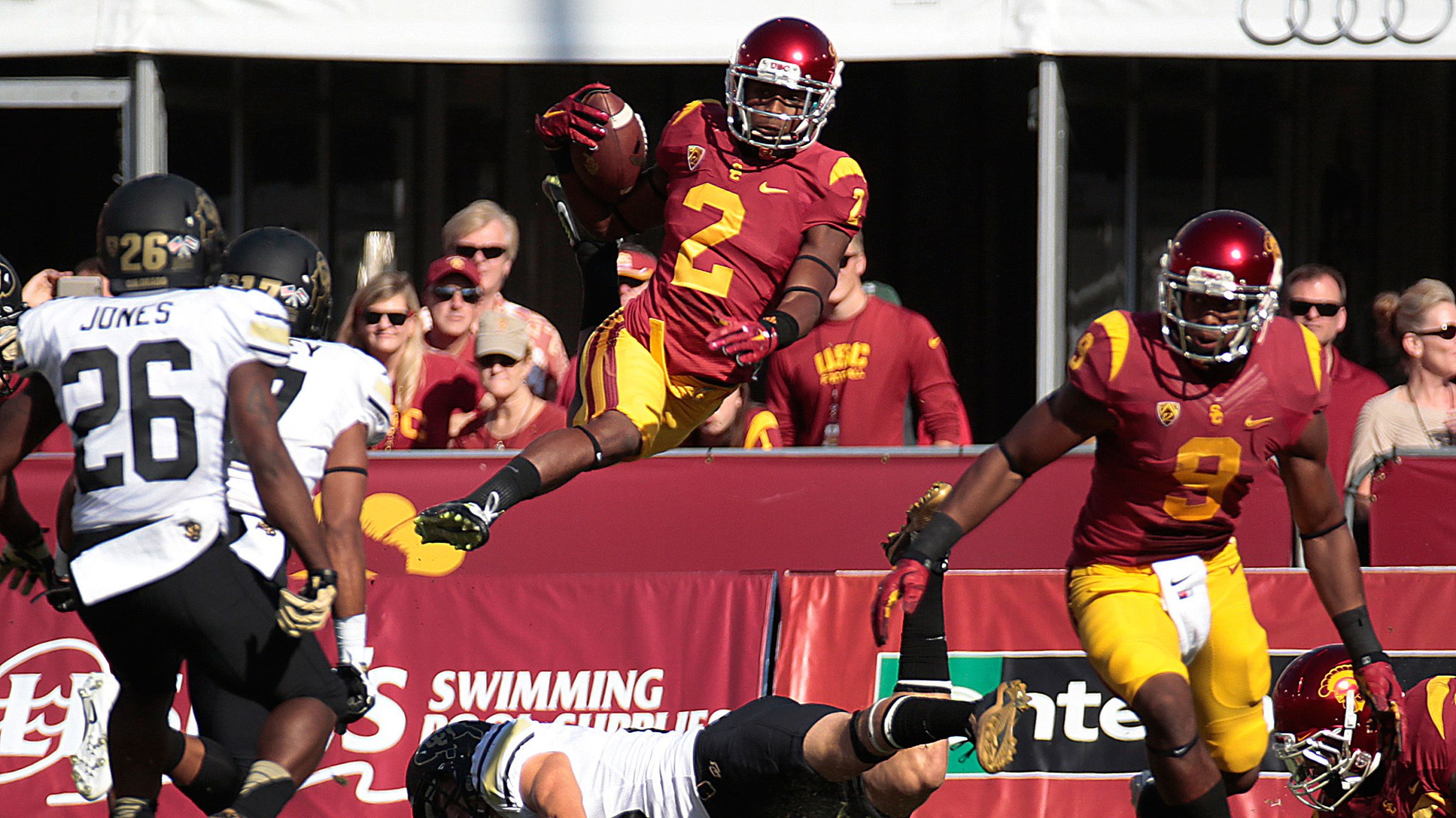 Consider Adoree’ Jackson for long enough and the comparisons to Charles Woodson become inevitable. Both players starred at running back in high school, and both were named Parade and USA Today first-team All-Americans. Both hail from the Midwest. Both transitioned to the same cornerback/wide receiver/kick returner role in college, but promptly made their biggest mark in the secondary. Yet the biggest comparison might not come until December:

Jackson is poised to become the first defensive back to make a legitimate run at the Heisman Trophy since Woodson won it in 1997.

Pay no attention to Bovada’s latest round of Heisman odds, which include only one USC Trojan: quarterback Cody Kessler, who’s listed at 12-1. Although just a sophomore, Jackson is, without a doubt, a bona fide Heisman contender. Just ask him.

“It’s definitely a goal of mine,” Jackson says. And he’s been saying this since March, when he told the Los Angeles Daily News that his non-QB status wouldn’t hurt his Heisman chances and likened himself to Woodson in the process.

Of course, there’s a huge difference between merely setting the Heisman as a goal and claiming that you’re going to win it, and Jackson sticks to the former. He makes sure to note that what matters most to him is helping USC win football games, that he’s tuning out the thunderous preseason hype, and that he’d be grateful to be considered for any individual award — let alone one as prestigious as the Heisman. When I tell him that Steve Sarkisian would be proud of such a diplomatic, platitudinous answer, he laughs.

As such things require extended lead times, Jackson’s 2015 Heisman campaign began in earnest at the end of his freshman season, during last year’s Holiday Bowl, which pitted the Trojans against Nebraska. USC prevailed in a 45-42 barn burner, thanks largely to two game-breaking scores from the electrifying 19-year-old. The first was a 98-yard kickoff return, which Jackson saw fit to consummate with an end zone front flip. The landing wasn’t perfect, but that’s only because Jackson still occasionally needs to remind us that he’s human. To fully appreciate its majesty, I recommend viewing it in slow motion.

At the 28-second mark, you may notice something particularly unsightly fly into the bottom left corner of the screen: a penalty flag. Yes, Jackson’s flip drew an unsportsmanlike conduct call, but he stands by it. “At practice that week, I told Coach Sark that if I scored, I was going to do a front flip into the end zone,” Jackson says. “He didn’t believe me!” At the very least, you’ve got to respect Jackson’s forthrightness. He then tells me that he is considering performing another flip to celebrate his first touchdown of 2015. Let’s hope he goes through with it.

Anyway! As for Jackson’s other touchdown, it came on a zigzagging 71-yard catch-and-run in the third quarter.

It was only Jackson’s third touchdown grab of the season, but he figures to enjoy plenty more this year with a substantially increased role on offense. Additionally, he’ll be taking on punt-returning duties for the first time in his career, and will also be expected to develop into a shutdown corner in the pass-happy Pac-12. No big deal! You won’t be surprised to learn that he was named to the watch list for the Paul Hornung Award, which recognizes college football’s most versatile player.

Jackson’s athletic versatility isn’t limited to football, either. He’s also a track star at USC, and by that I mean he harbors legitimate Olympic aspirations for Rio 2016. At the NCAA Championships in June, he placed fifth in the long jump with a personal best of 25 feet, 11.5 inches, and anchored the Trojans’ 4×100 relay team, which took fourth. This, despite skipping much of the track season to participate in spring football practices.

While he’s focused on football, which makes sense when you consider the average earnings of an NFL cornerback vis-à-vis those of a world-class long jumper, Jackson says he’s pretty sure that Sarkisian will let him pursue the Olympics next summer if the opportunity arises. In talking with Jackson, it’s sort of staggering to hear him discuss these matters so casually; he talks about planning for the Rio Games as if they’re some quotidian event on the calendar and not, y’know, the pinnacle of physical competition. It’s a fascinating glimpse into what sociologists might call the banality of freakish athleticism.

Speaking of freakish athleticism: It positively abounds in college football these days, as Jackson isn’t the only one making waves as a two-way player. In 2014, UCLA’s Myles Jack and Washington’s Shaq Thompson famously pioneered the position of runningbacker, and a whole host of others will attempt to follow in their footsteps this season. It’s not lost on Jackson that he’s at the vanguard of a shift to increasingly hybridized roles for the game’s best athletes. “Coaches aren’t afraid to put their athletes out there on both sides anymore,” he says. “I think we’ll see more of it.”

Which brings us back to the Heisman. While quarterbacks — and, to a lesser extent, running backs — certainly have the inside track to Heisman glory, the website HeismanPundit.com lists one other type of player that could conceivably win the award: “multi-threat athlete.” Jackson’s campaign will also benefit from his masterful showmanship. In addition to the Holiday Bowl flip, he made his signing day announcement by pulling random items out of a box in agonizing fashion until he finally got to a USC hat.

For someone whose job it is to defy established conventions on the football field, Jackson’s explanation is fitting. “My sister came up with the idea,” he says. “I was down for it, just to be different from everybody else. I didn’t want to do the traditional hat trick.”

The 30: Who Did the Mets Sacrifice to the Schedule-Making Gods?